I had grand hopes for today. Kim was gone at a baby shower (congratulations Peter and Gloria!) so I figured I had a full day of car progress ahead of me. I started out the day taking care of some house needs; fixed the grout in the shower, went to Home Depot 3 times, and fixed two leaking toilets. Once my chores were done it was down to the garage about 11am.

First up – get the intake plenum on and attach the oil separator hose to the plenum. That was all fairly straight forward based on Dave’s blog and proceeded quickly with that. I then started up a copy of Le Mans, the  Steve McQueen film (via YouTube), as some background noise. I kept telling Kim I wanted to watch it with her to which she replied “I read the review, it has no dialog. How do you make a movie with no dialog?”. My response, in classic man-fashion, “It’s a racing movie – why the hell do you need dialog when you have a bunch of 917’s to listen to?”… we obviously have yet to watch it together. 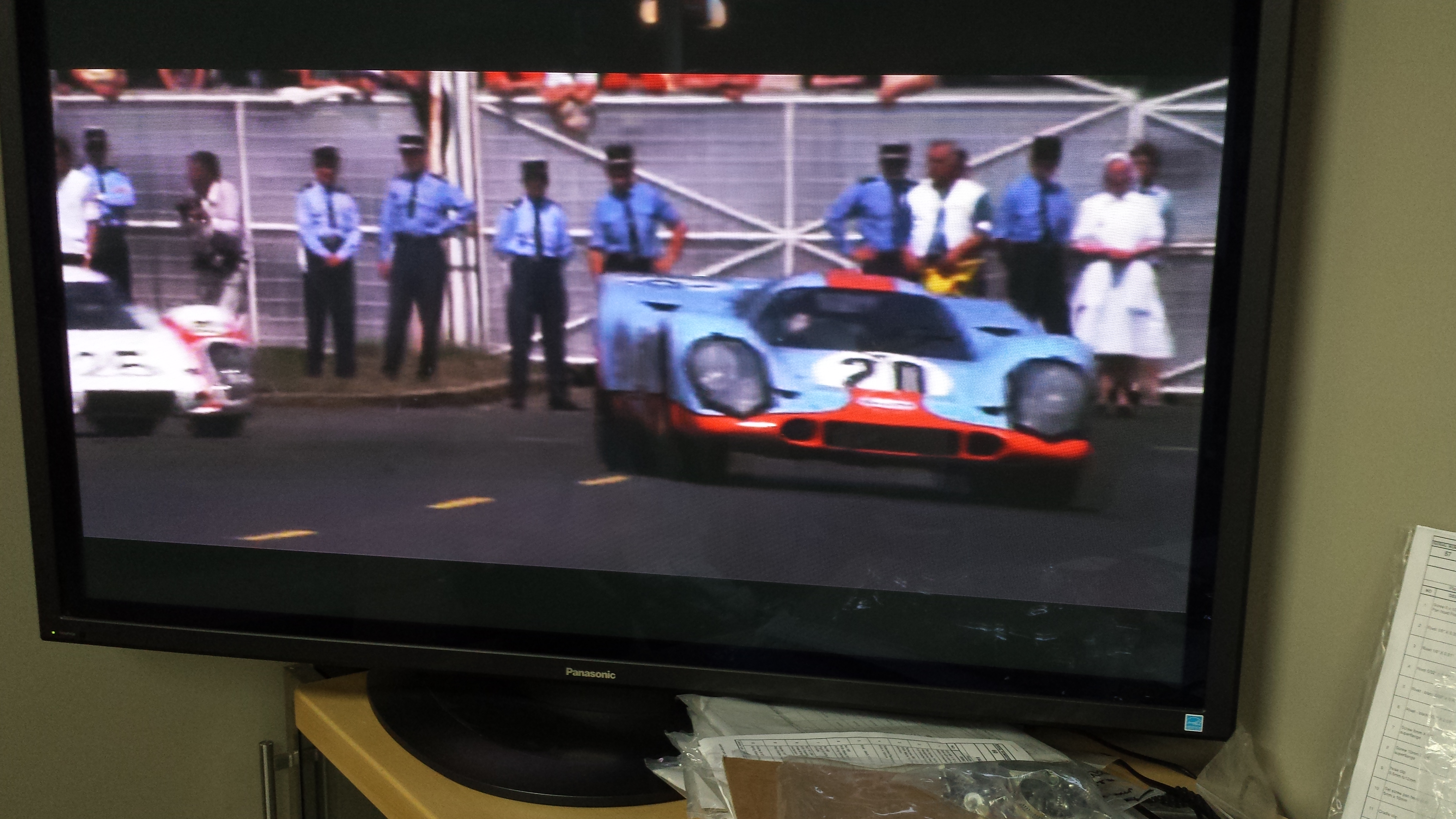 While that was getting going I tried to figure out where the dipstick goes, how it is assembled, and ended up with little progress. I did figure out the tube attaches to the metal pipe / bracket… but that’s about it. I couldn’t get it much further than this up the pipe – that look ok? And where does it attach to on the engine??? 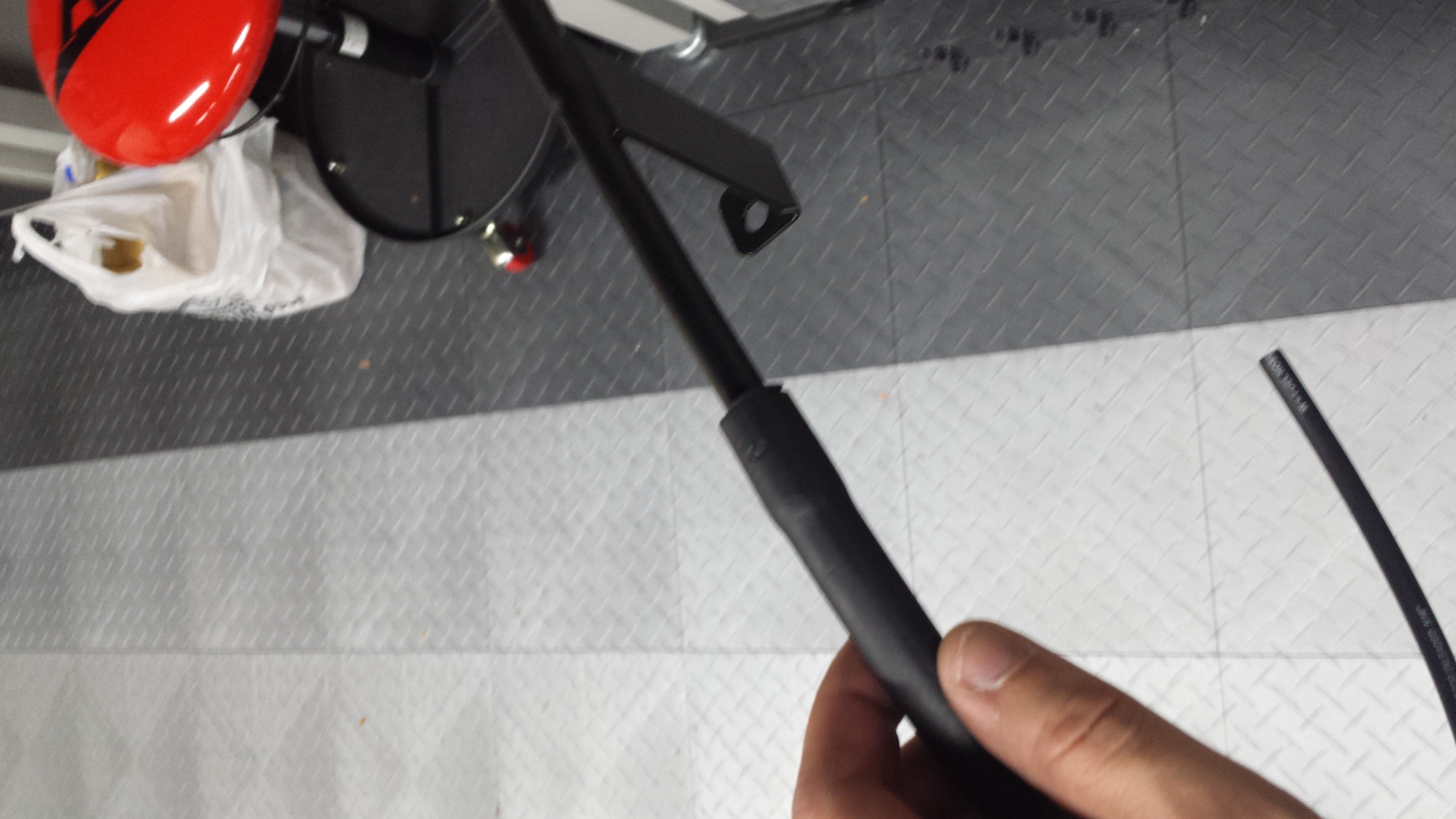 After setting that aside, I moved onto the boot cover. First step was to remove the metal rod from inside the boot cover. Using an Xacto knife I cut away the stitching and pulled it out. Fairly simple, just be careful with that knife! 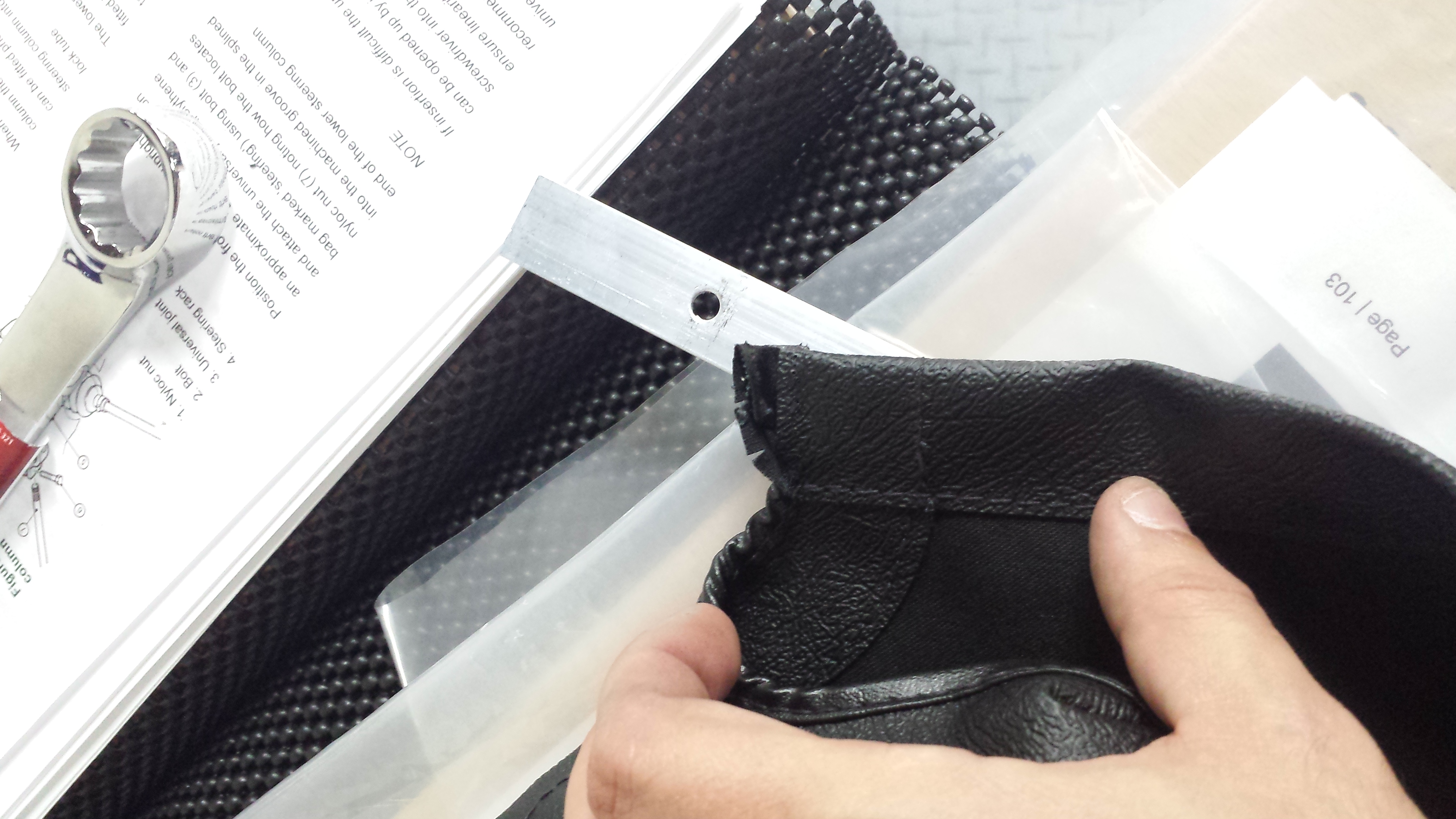 After that, I used the Xacto knife to cut out the threaded holes for the harness bolts. Took a little carving and patience, but not overly difficult. 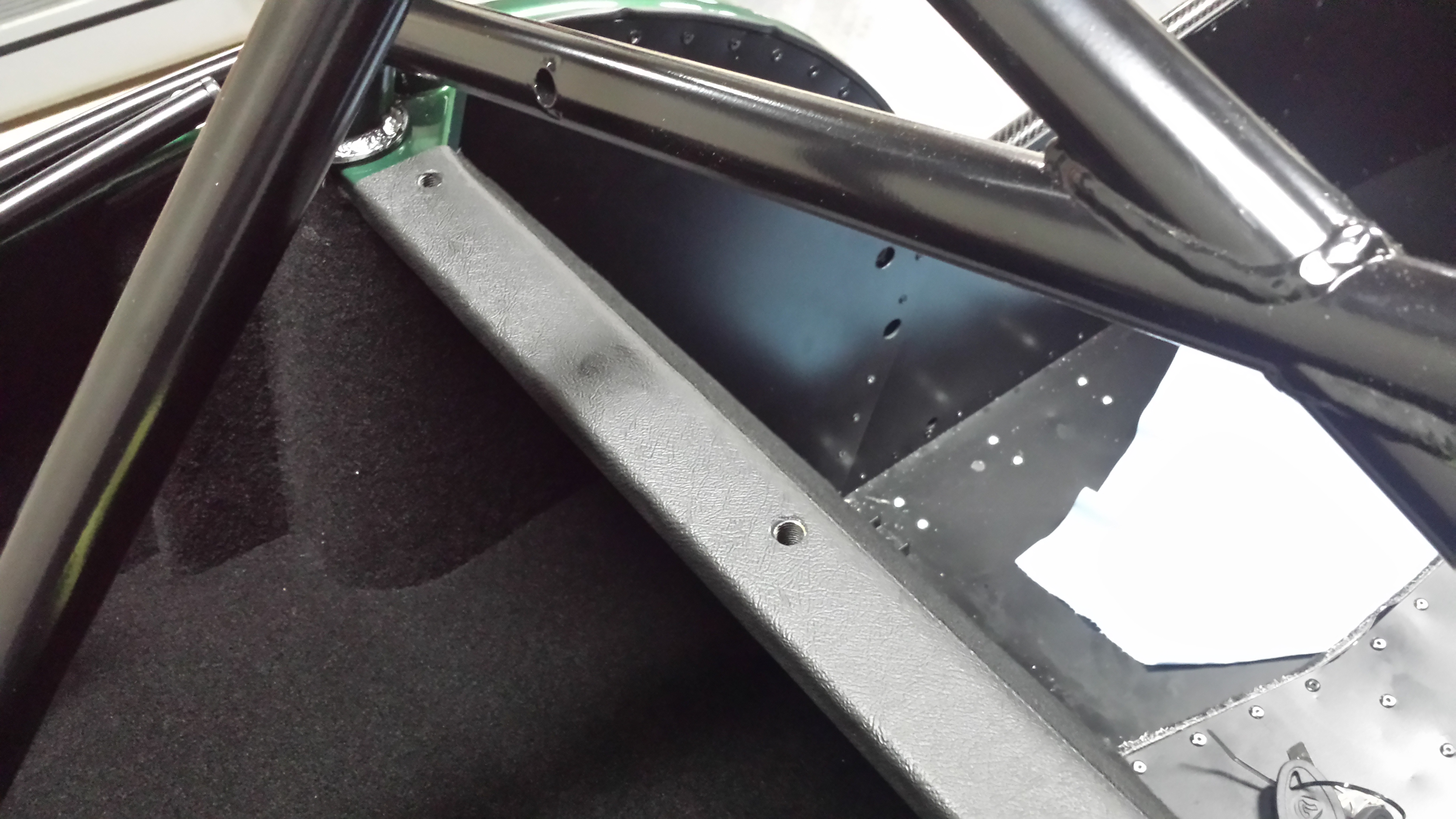 Afterwards, referencing the manual, I drilled out the holes for the self tapping screws and attached the popper bases. Note, there are two different kinds of bases in the bag – make sure you’re using the right ones! I didn’t at first and had to re-do them. 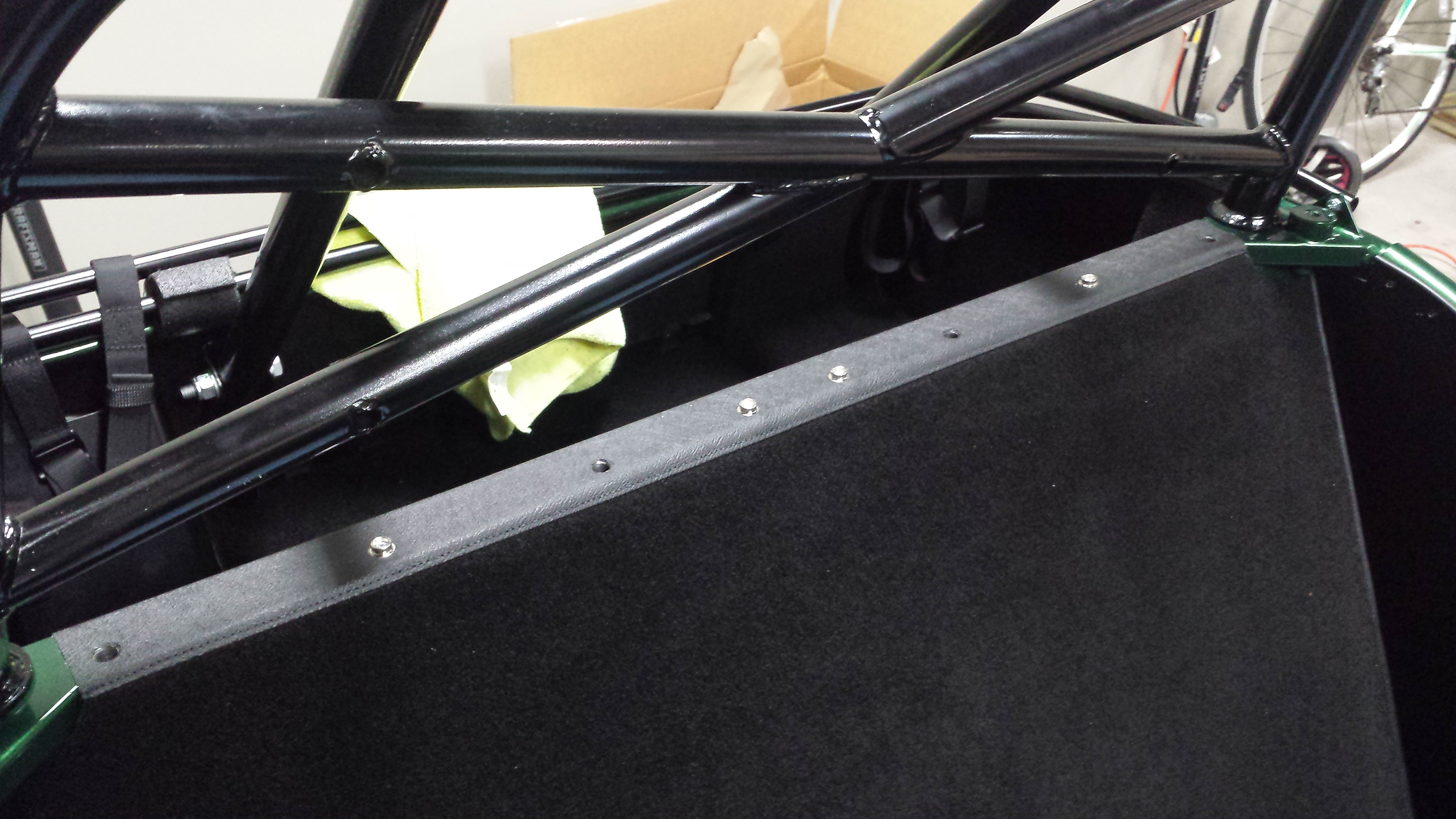 Once the boot was lined up, I used the little linen cutting wheel I bought at JoAnn Fabrics to punch holes for the poppers. This tool worked great – highly recommended. 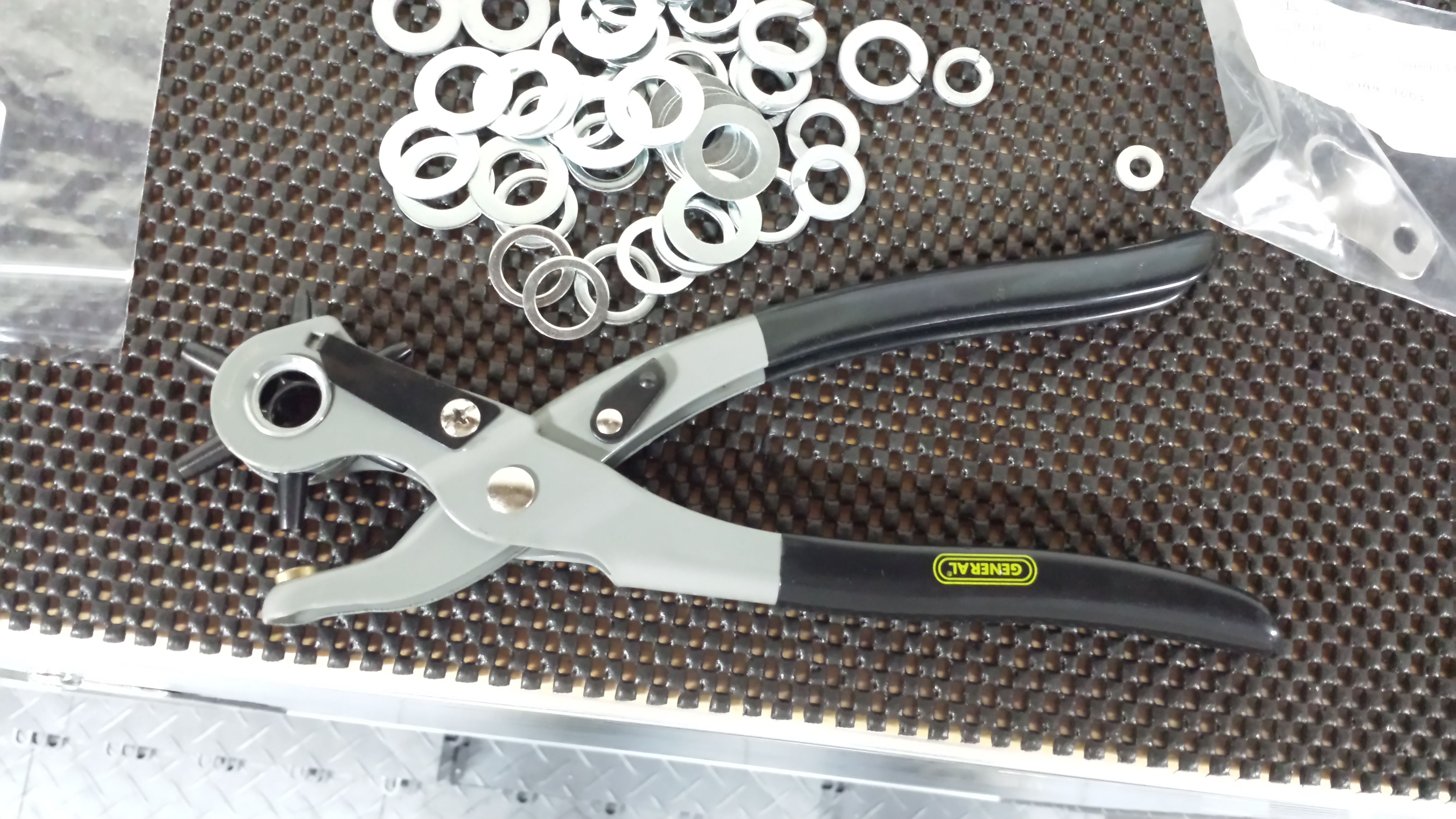 The only problem is that popper base tool Caterham supplies royally sucks. If you hit it at an odd angle it turns into a missile. First miss sent it sailing into the Exige’s fender. Yes, lots of cussing as a result but no damage I can see.

Afterward, I moved onto the harnesses. Opened the first box and began fitting them to the driver side. Everything went in as expected, rucked the cover as expected, then set it aside for the next set. And that’s where it went off the rails. One of the boxes was labeled with “French” and a 5 digit build number. Having read Daniel French’s blog about discolored harnesses I wasn’t at all surprised to find I had discolored harnesses too. Maybe I got his old ones on accident or maybe another set made at the same time, no idea. But either way they don’t match and will need to be replaced. 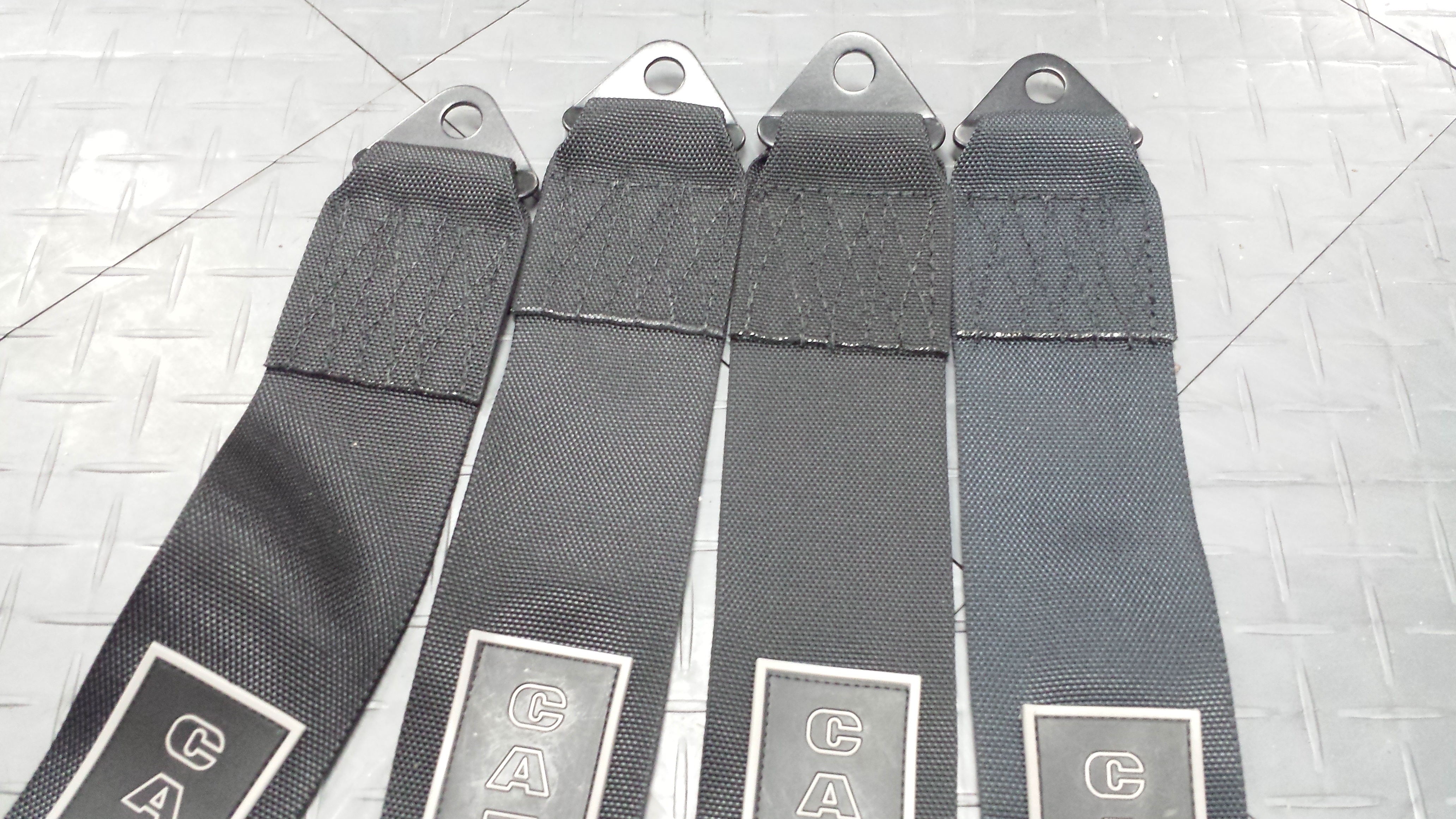 Next up was the seats. The first 3 holes lined up just fine, the fourth though isn’t even close. Not sure how best to drill this out since it will make the bolt loose in the hole. Any ideas? 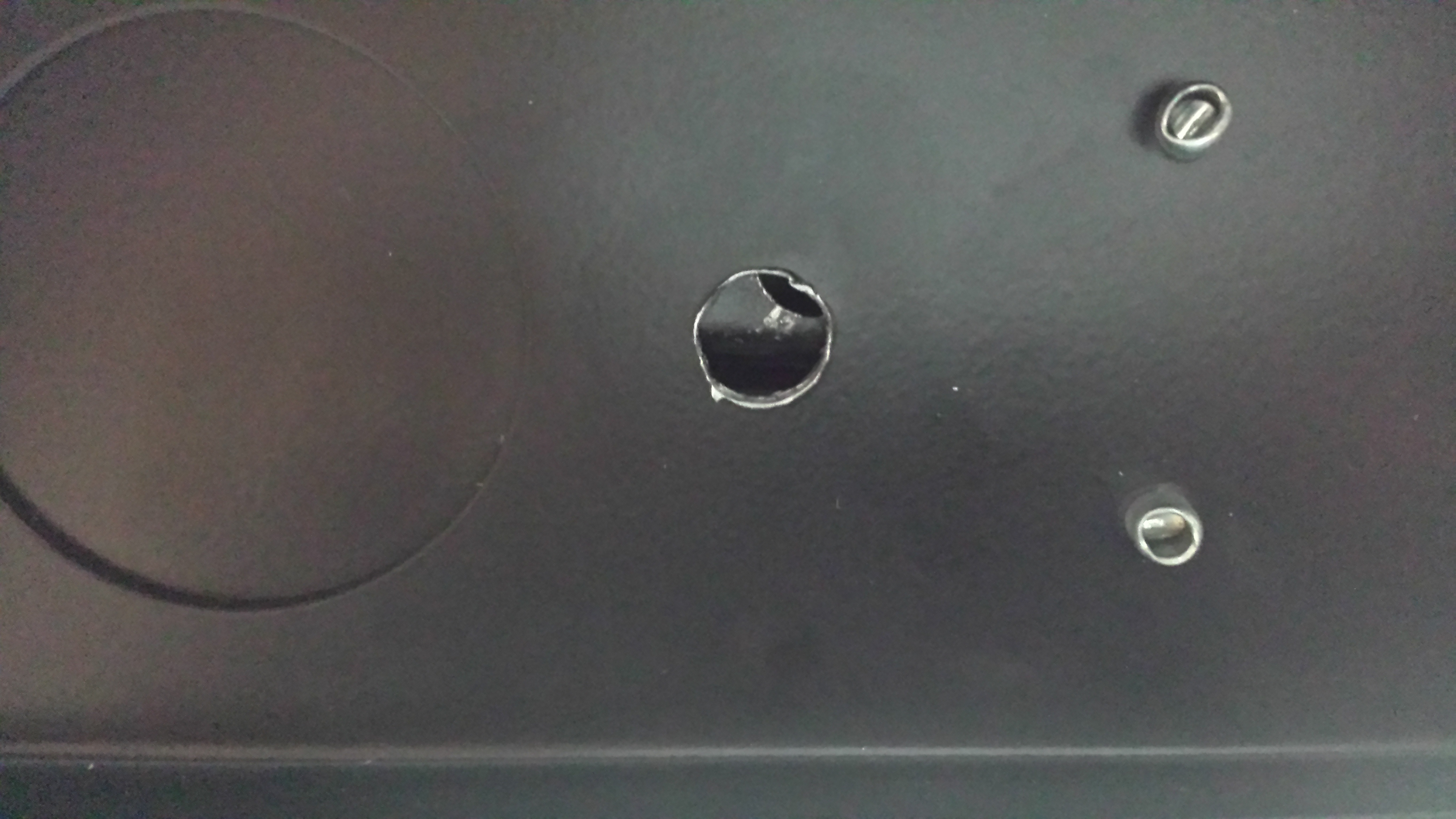 By now I was pretty upset. I just couldn’t get a break with this thing at all. I felt that despire being down there all day – almost 8 hours at this point – that I’d have more progress to show for it. So I got a beer, hopped in the driver’s seat, put on the shoulder harnesses, buckled in…. and drank a beer. I can’t wait to see the time lapse – a good 10 minutes of me sitting the car drinking a beer cause I had no other ideas of what to do I was so frustrated. 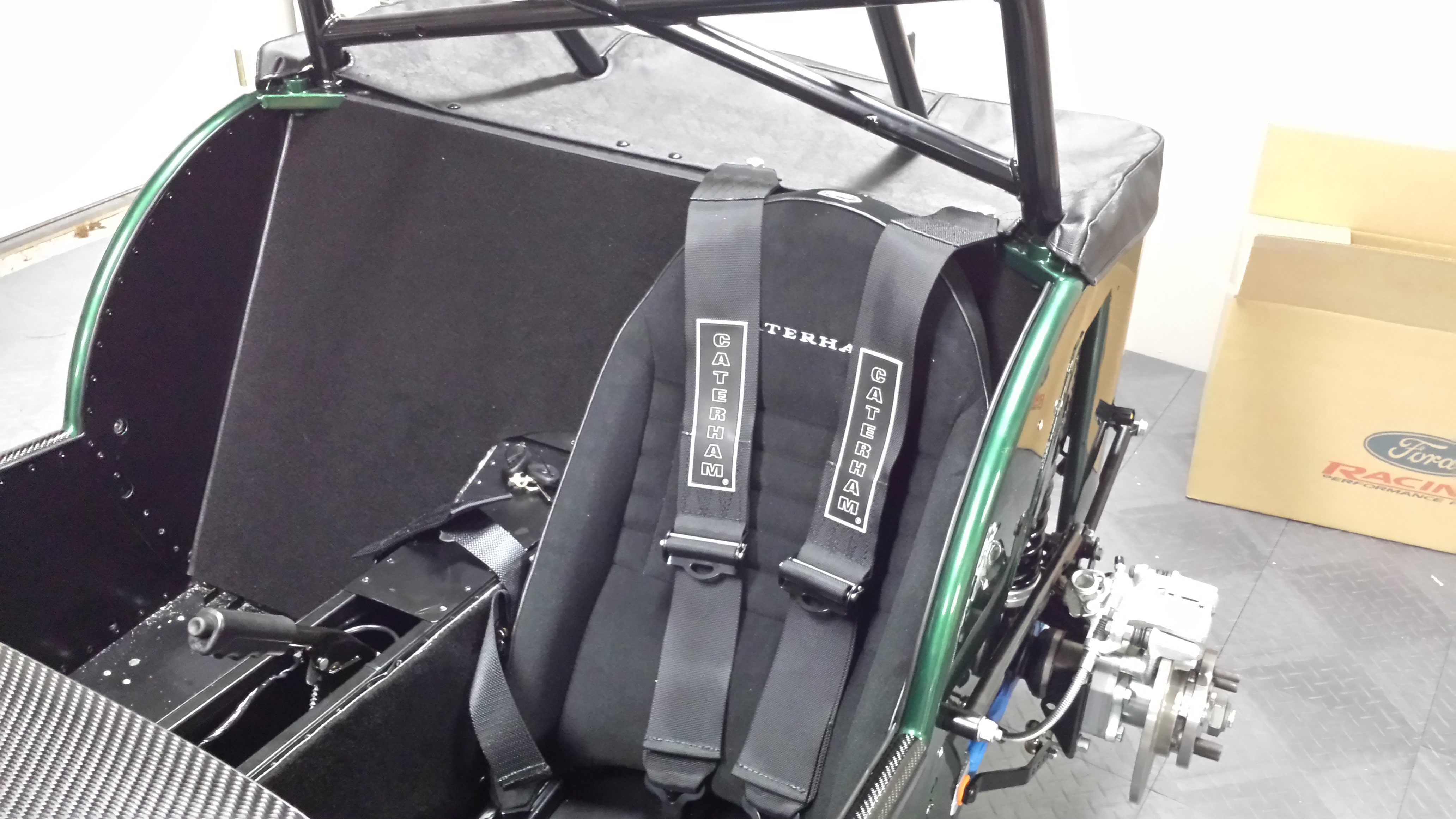 Kim showed up shortly after and hopped in to see what it felt like. She was not a fan of the harnesses. 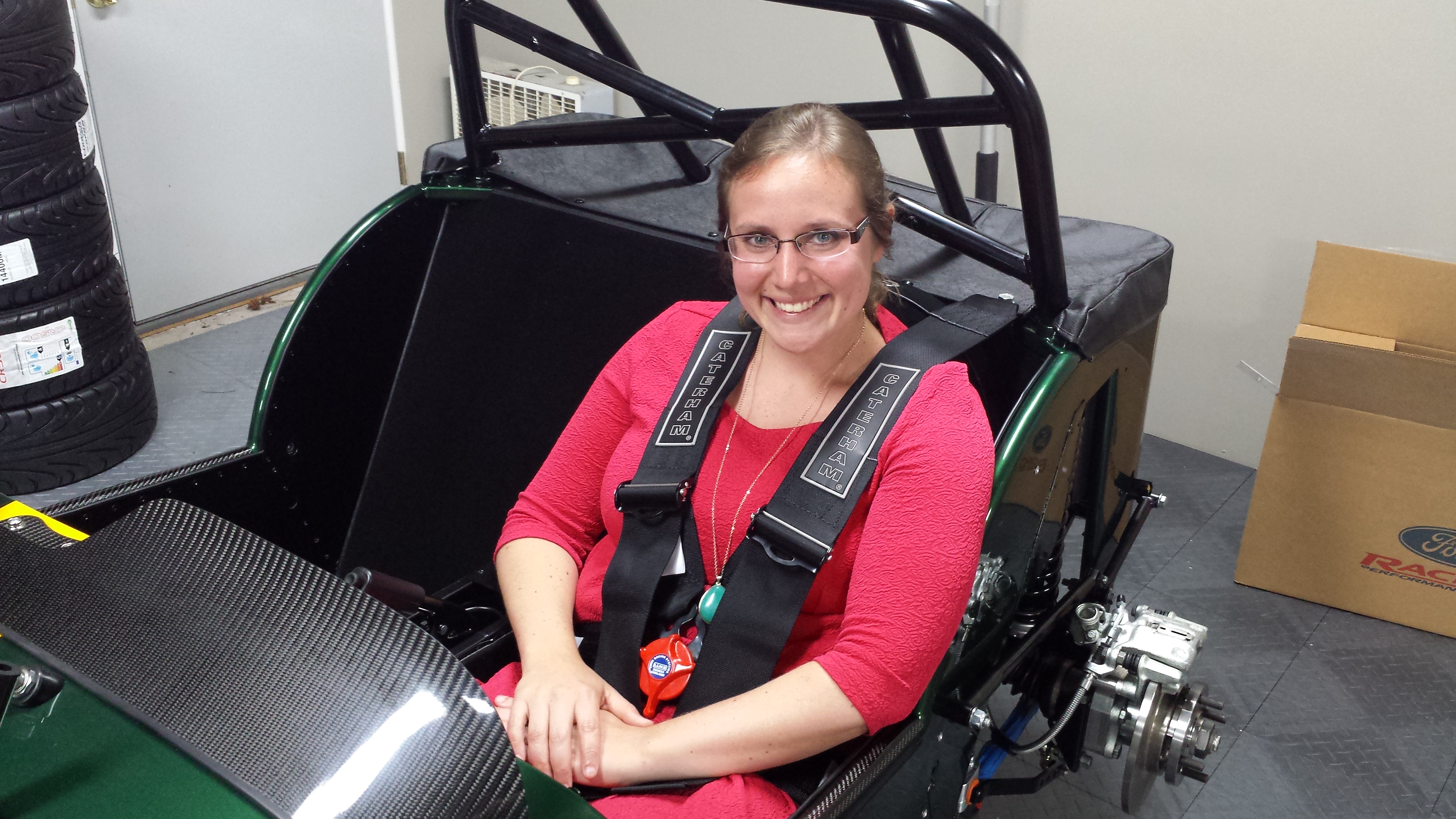 After I showed her what I’d accomplished for the day, she helped me get the airbox in (missing more bolts to hold the airbox closed, same as other folks), plenum on, throttle cable attached, and to button up the left side. We called it a night shortly afterwards as I wasn’t in any mood to continue (and hadn’t eaten since 7am that morning). I need Venice here to keep me on a regular eating schedule! Ha!