The coil pack harness and the alternator wiring (also missing from other folks’ builds) arrived during the week and was eager to get things moving again. That, and I hadn’t been home for a weekend in 5 weeks and was in desperate need of some dedicated car time! Spring is here, weather warming up, time to get moving!

I figured the first task for the day was to get the electrical harnesses in. I spent some time early in the AM attaching each plug then labeling as I went with a piece of blue tape. That seemed to make things easier so when it came time to attach stuff it was really just click-click-click. Adam, Venice, and Heather arrived just as I was getting moving on plugging stuff up so we finished that up fairly quickly while Venice and Heather went to play in the garden. There was some debate about how to route things, but like Simon told me, it can only really fit one way. Your best bet is to attach the wire harnesses first, then the cooling since it generally sits on top of the harnesses, but since I was missing the harnesses I did things a bit out of order. No major issue, just might have saved a little rework moving lines around. I imagine the UK folks don’t have this issue since the engine is supplied with the car (usually). 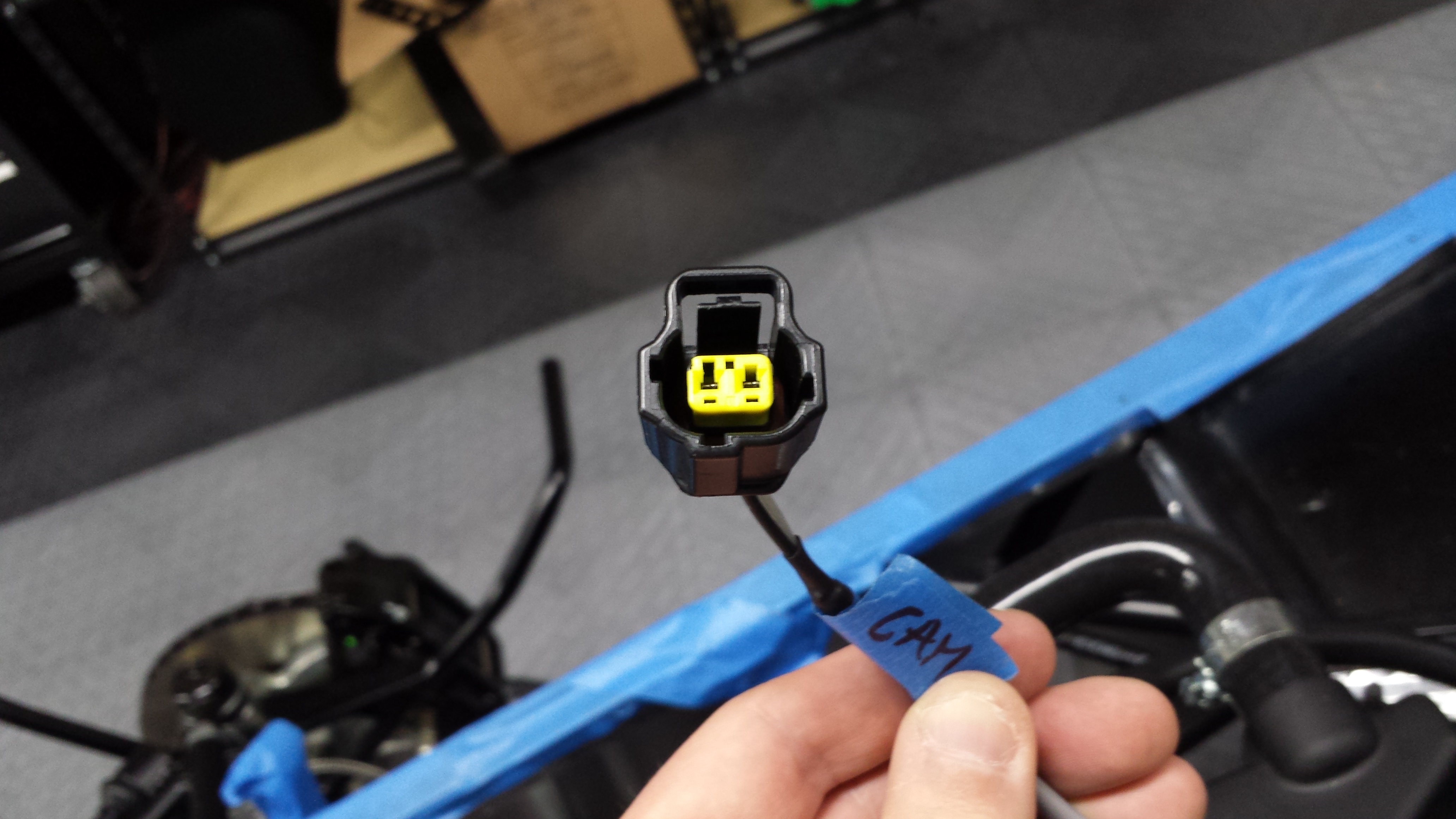 Simon also sent me a note about moving the coolant line that goes over the water bottle. In his build he used a J hose to drop the line down parallel to the washer bottle rather than pass over the top as I did. I’ve got one extra J hose left but may need it for the PCV to air intake line – will swap that out if I don’t need the other line. 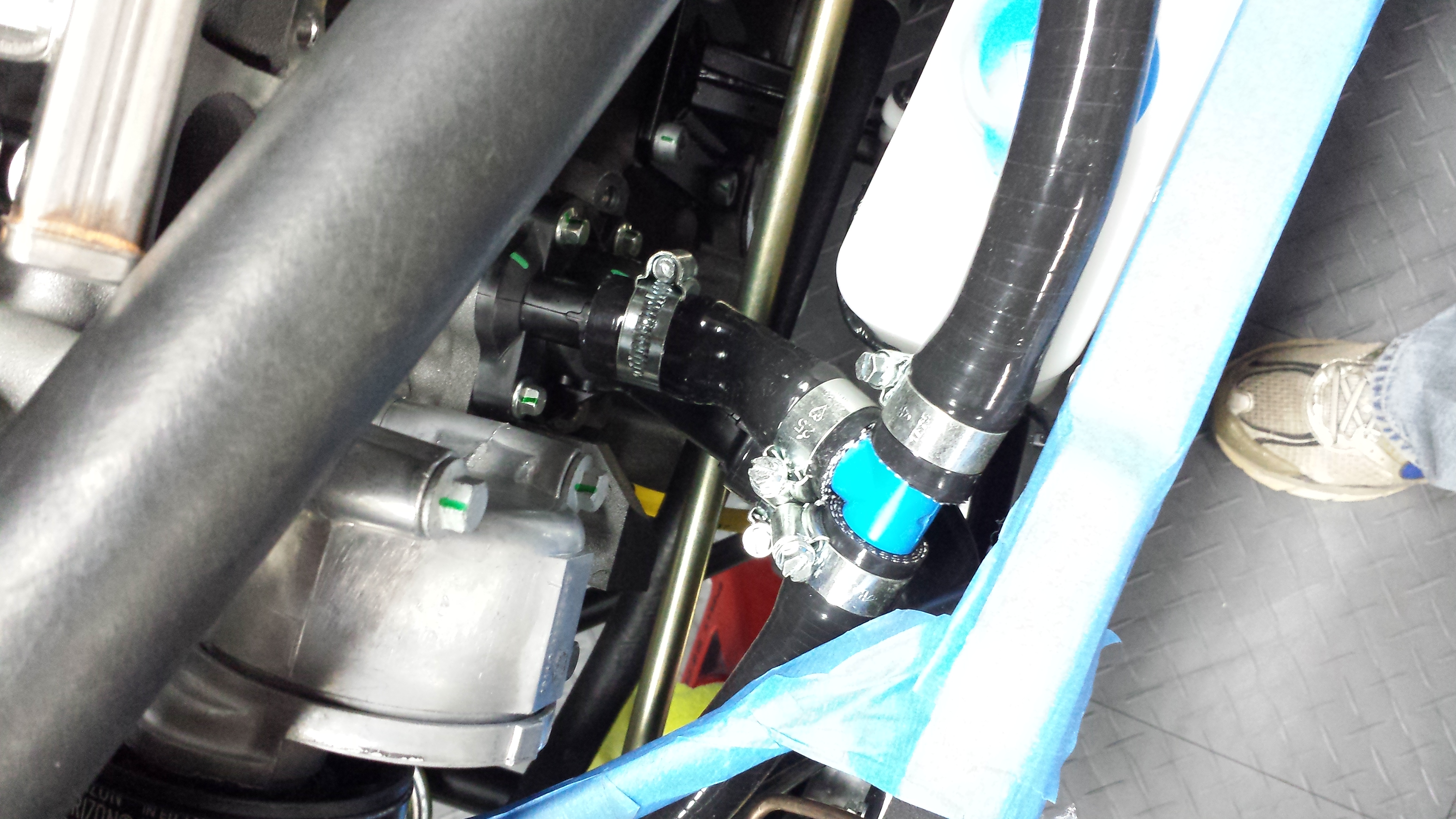 After that, Adam and I set about getting the throttle body drilled out and attached now that I had the screw needed to hold the bracket in place. An interesting note on the bracket – mine is backwards compared to the UK cars. Theirs’ sit on the outside of the bracket, mine on the inside based on the machined groove. I don’t know if that’s intentional, harmful, or what, but it did attach ok once we got the bracket drilled out. It was a little nerve racking drilling towards the throttle body spring, but the good news is we didn’t harm it. Pic of what the final assembly looks like. 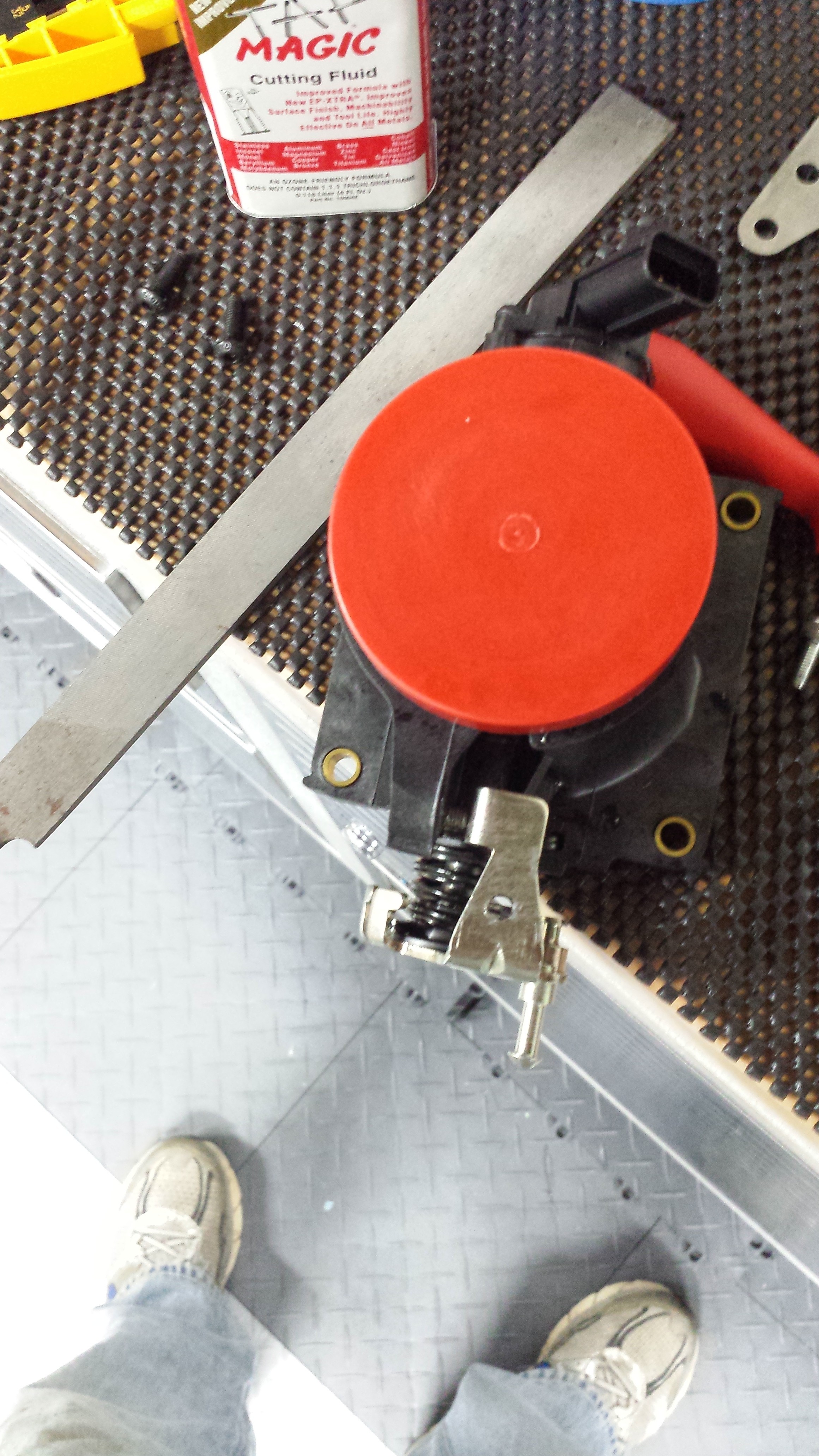 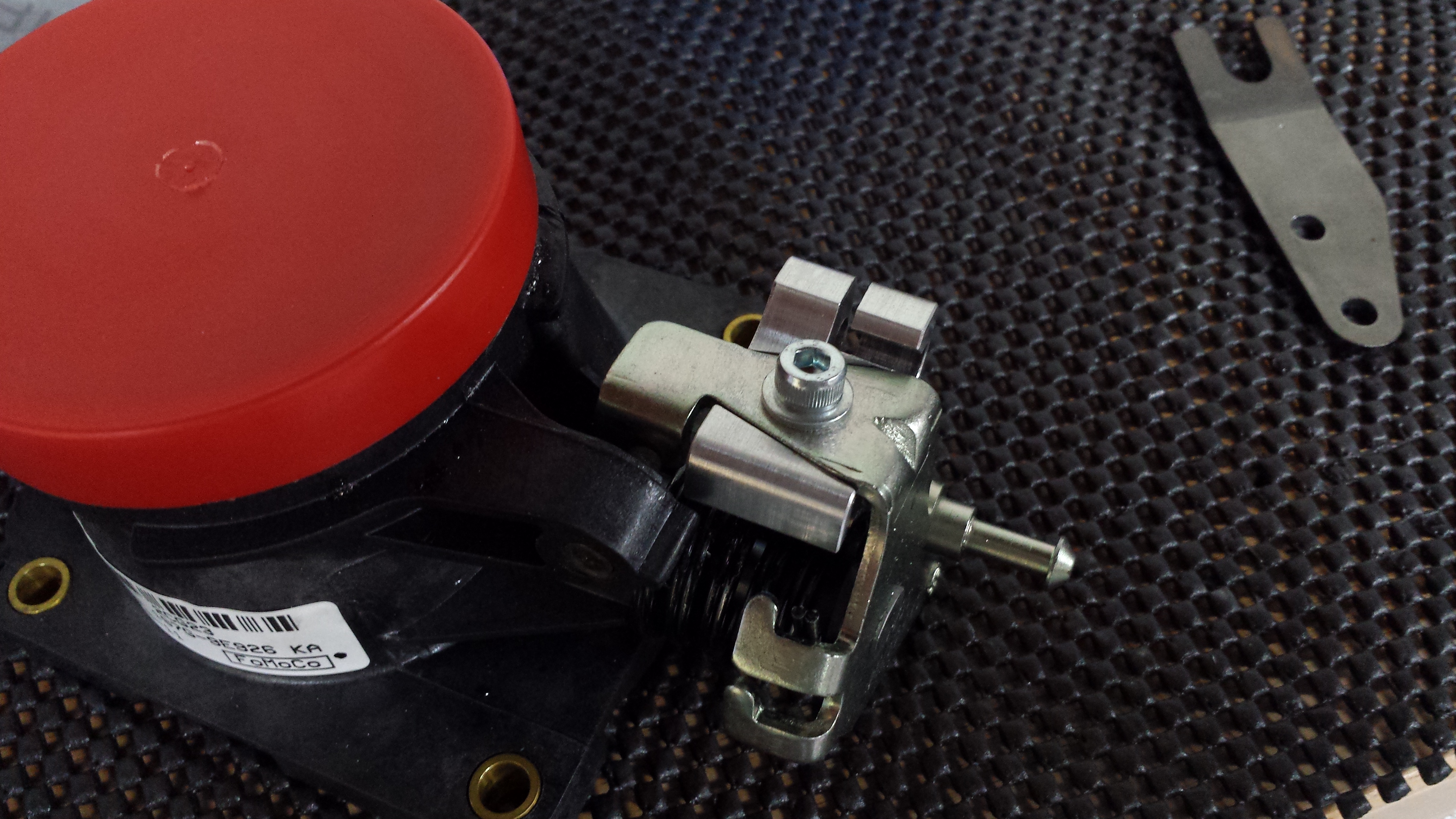 Once complete, I set about attaching the inertia switch. I didn’t realize I was missing one until I got an email from Simon mentioning he had received an extra in his car. Given we got the whole wrong chassis’ in our kit it wasn’t unexpected we had some parts for each other’s car. 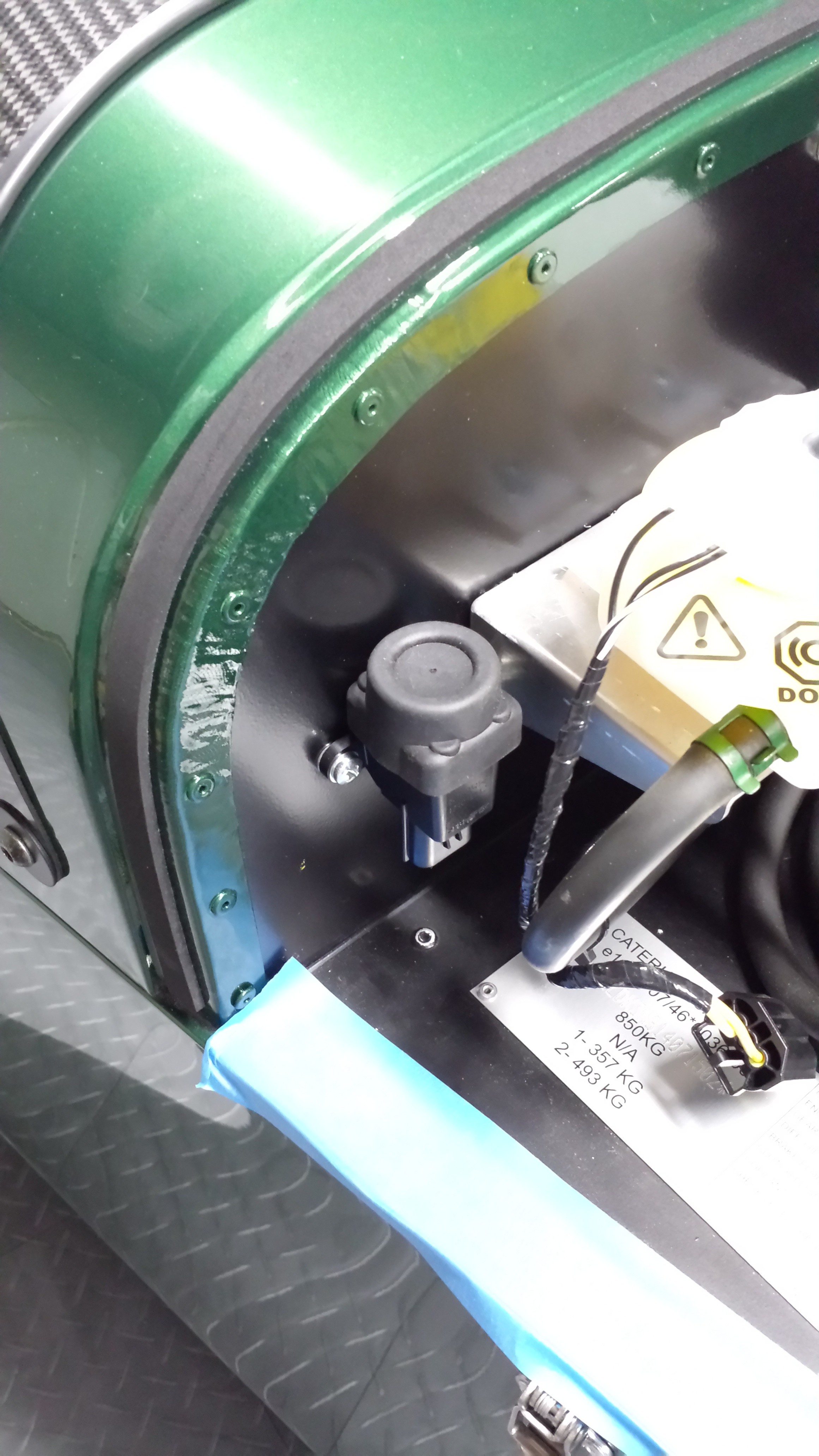 Another simple task – putting in the two setscrews into the top heater holes. Those were missing prior; Derek sent some along with the wire harnesses and the throttle bracket bolt. 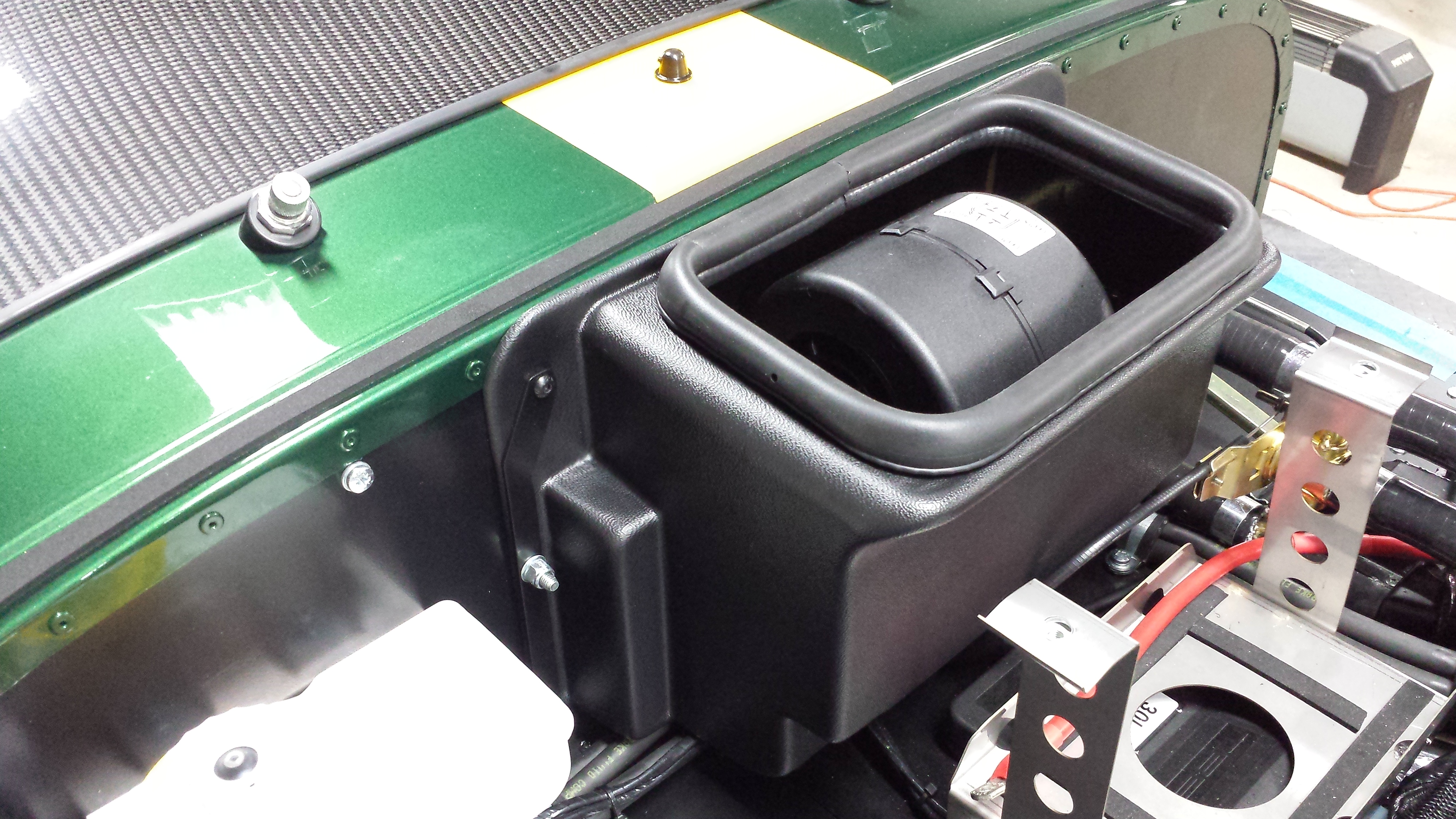 I discovered I’m missing the spade connector to the submarine ground; will have to request one from Derek at Caterham. Note the green wire doesn’t go there, that goes to the spade to ring terminal connector, but didn’t have one so stuck it in place just to hold the harness steady. 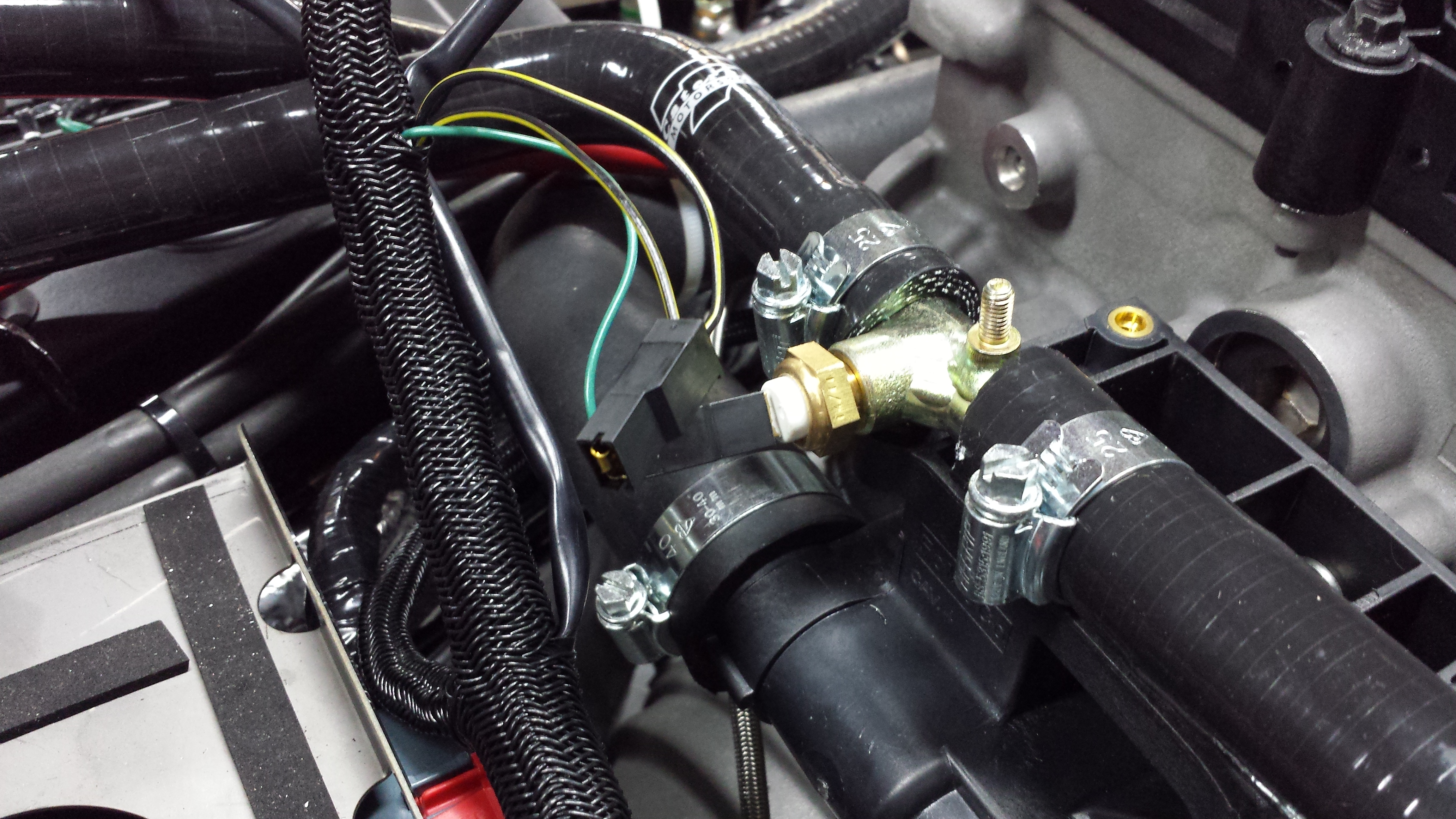 One thing we were a bit perplexed about is the center plug in the picture below. After much Google-Fu I’ve discovered its the ‘cylinder head temperature sensor’ or ‘CHT sensor’ not used by Caterham. I’ll need to find a plug to fill it with since it’s probably bad to leave it just open like that. 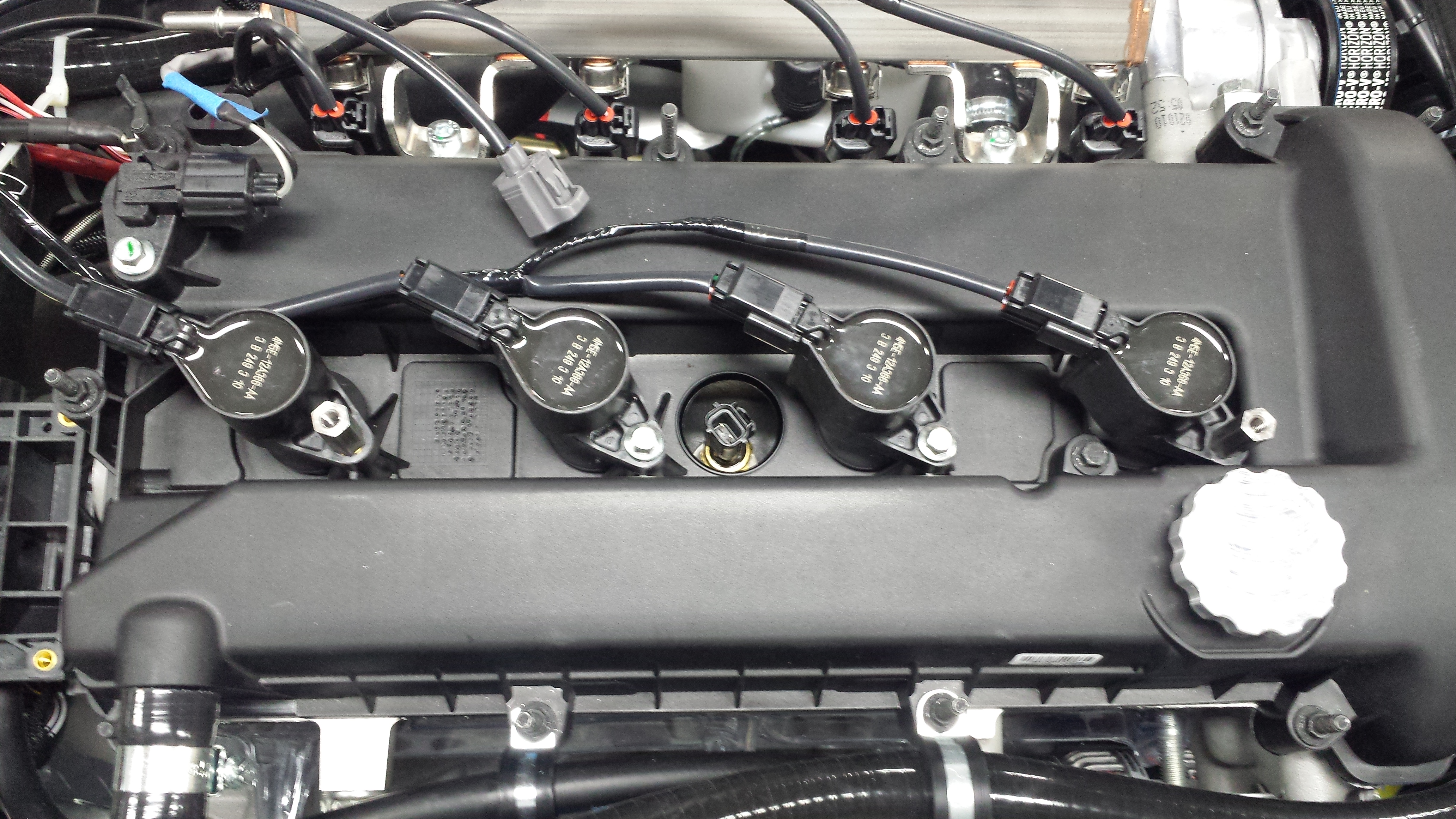 Attached the chassis ground to the engine then hooked up the wiring to the starter once everything was in place. There is an excellent picture / post of what needs to go where on Mark Pier’s blog so won’t duplicate it here. I’ve since discovered I’ll need to re-route a bit as the wiring isn’t quite as how I want it – will tackle that next time I’m down near the car since it’s something I can do myself. 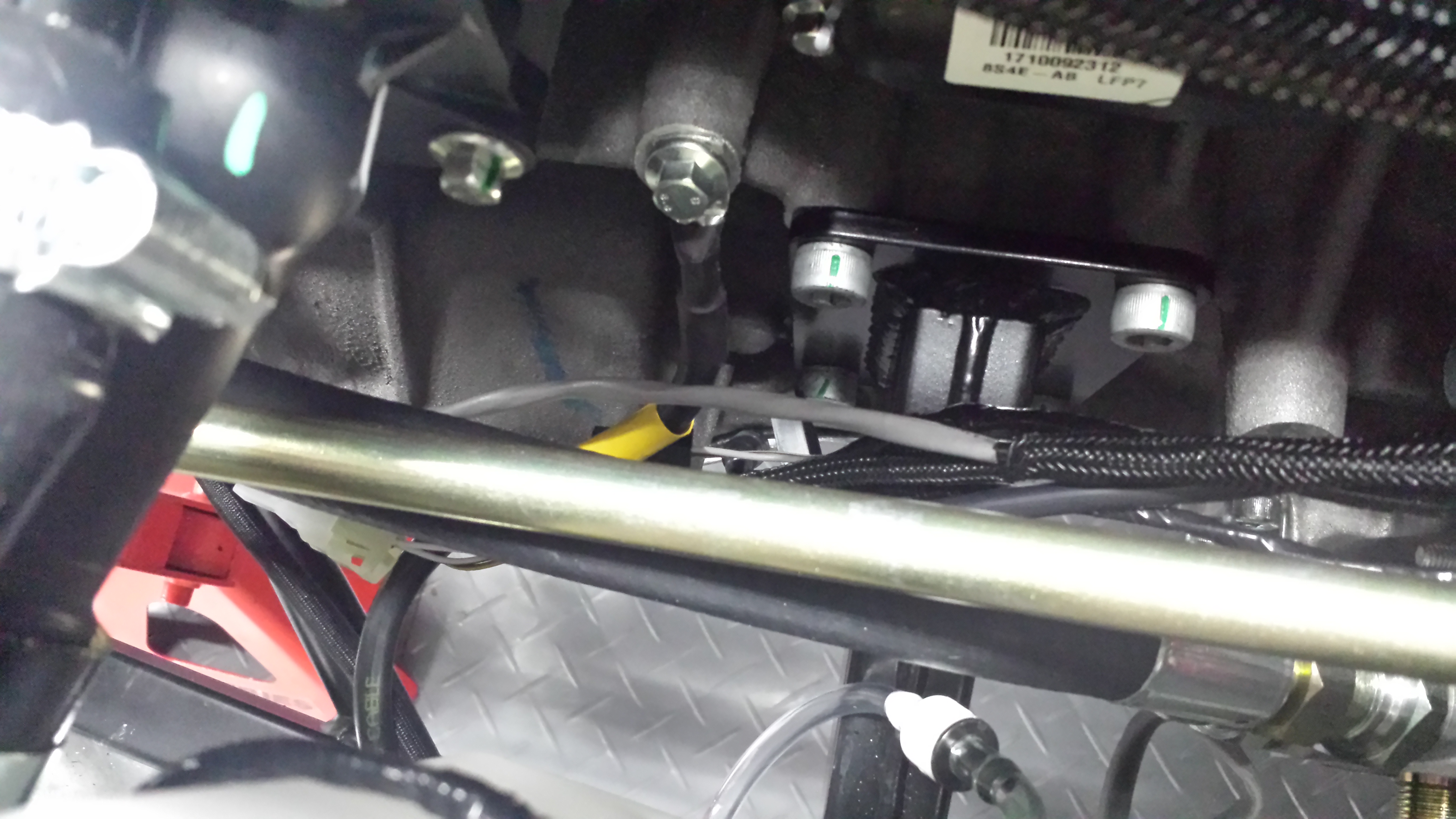 Adam and then moved onto the exhaust. Lots of pretty tubes. We got the bracket on the back then called it quits for the day; a baby needed to be fed and I had to get ready to head to my mom’s for Easter. What was that again about not going out of town? 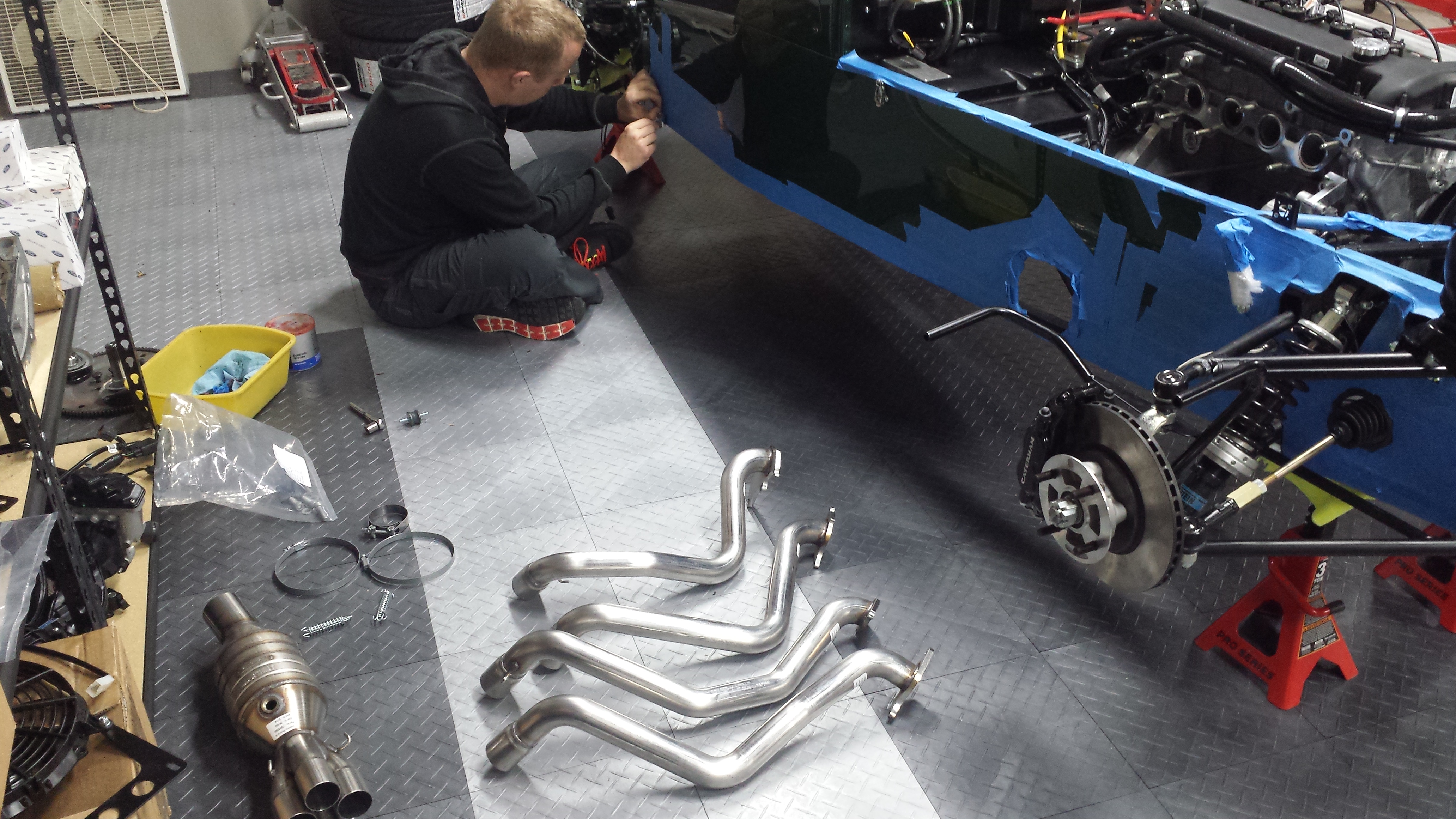