After getting the shipping confusion straightened out with USF Holland and New Penn Freight, it was determined the crate would be delivered Thursday the 28th between 4 and 6pm. Which explains why at 11am a USF Holland truck pulled up in front of the house. I went outside and talked the driver and told him he was early by about 5 hours and we could do the delivery now, however, I was about worthless since I couldn’t lift more than 10 pounds because of my surgery this past weekend. He said no sweat, let’s do it, so to work we went. 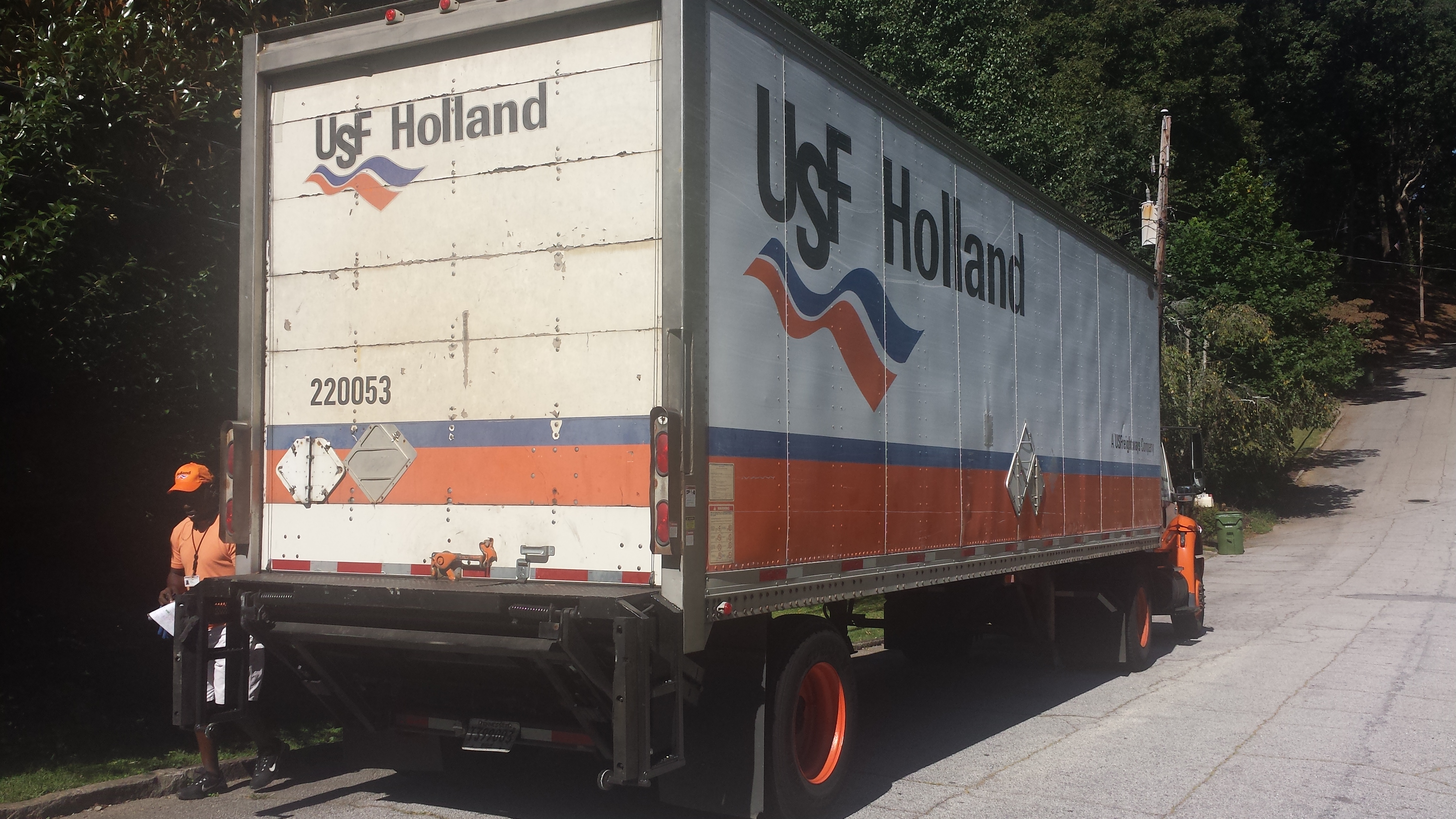 First step was to get it onto the lift gate; no issues encountered but that was the first time I noticed the holes. It looks like someone put a forklift through the end of it. One hole was wide open, the other merely cracked open, so my guess was the tongs on the forklift didn’t go all the way into the crate and hit the chassis. Either way, it still made me shake my head… nothing simple or easy. 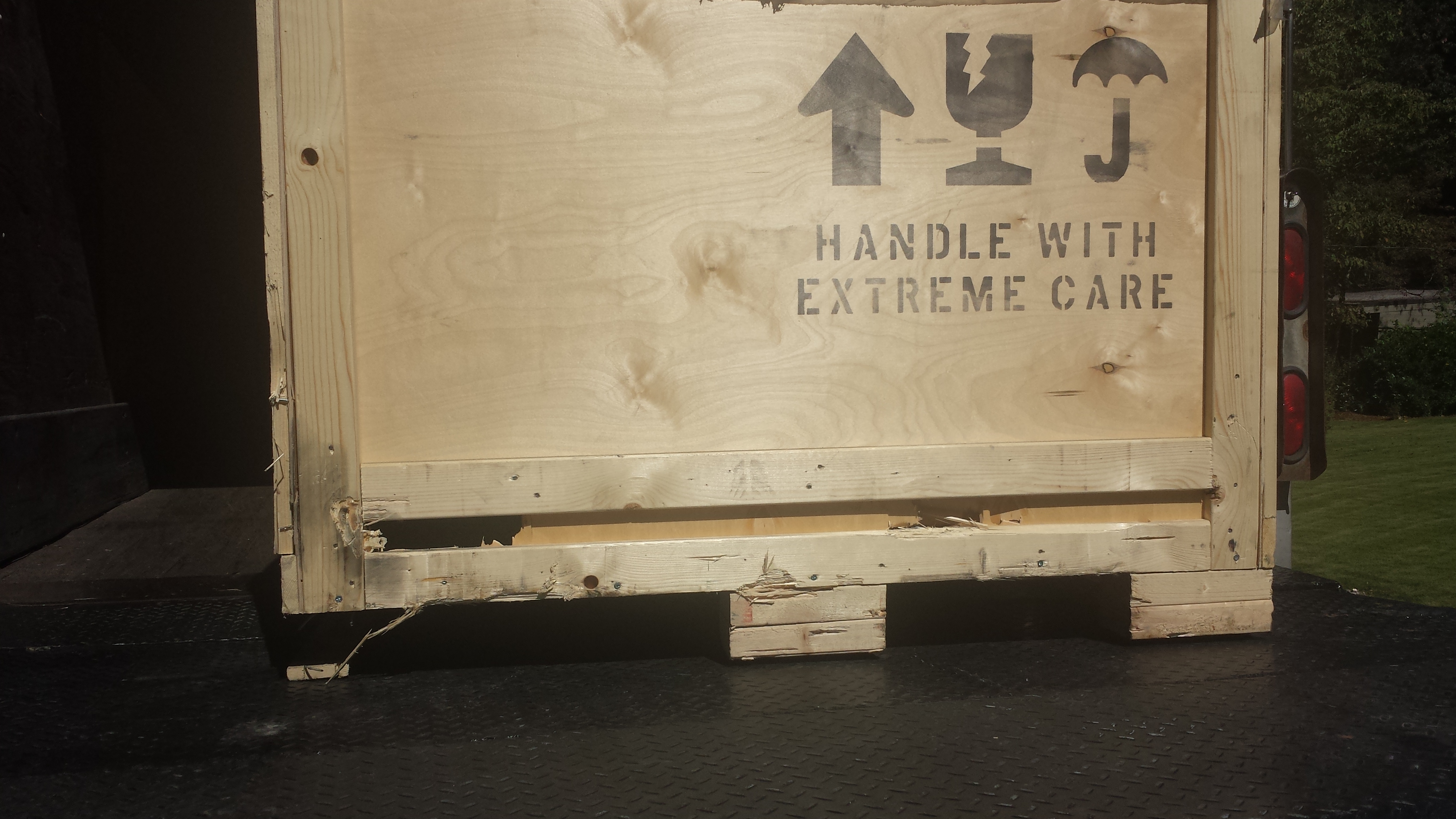 Next step was to get it down the driveway. For that we put it on the pallet jack, let it slide its way down, and gravity did the work. No drama there either. We then spun it around, picked up one side with the pallet jack, and pushed it into the garage. And she was home. 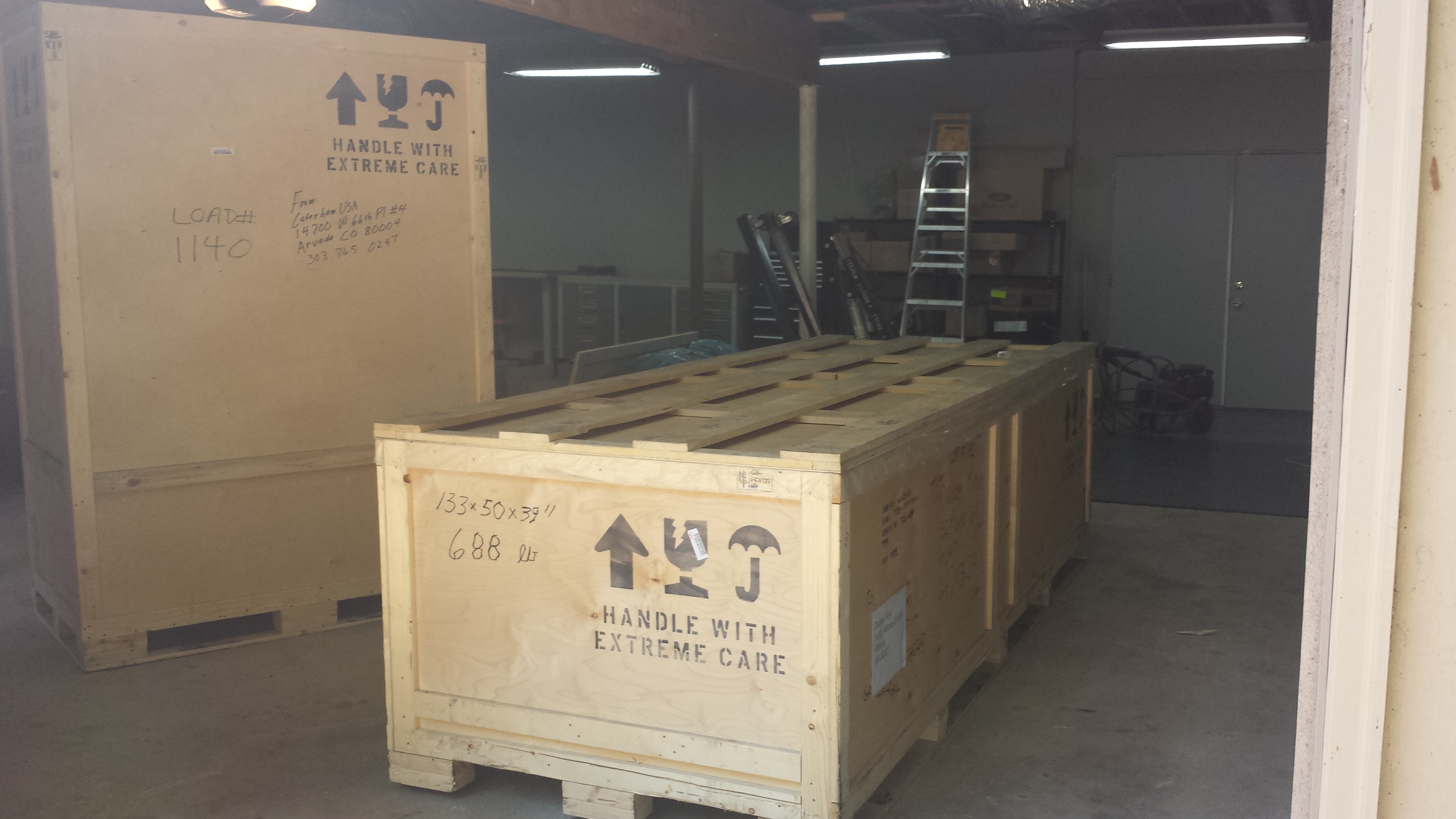 With the crate in it was back to work for a few more hours. The holes had me wondering all afternoon, but was busy with work and knew I wouldn’t have time to get it checked until later.

Mick, Carol, Jimmy, Kim, and Bob showed up around 6 and we proceeded to open the crate up. I was pretty sure I’d have a green chassis, but the big question now was any damage that might be present. And those holes… still had me nervous.

After pulling off the top of the crate it was apparent the chassis was far enough away from the edge of the crate that the tongs from the forklift didn’t hit it. Whew. Felt much better after that mystery was solved. So … on to opening the crate.

With the big reveal complete, let’s look at some pictures! First, we have Mick being … Mick.

And we got me in the green one with a big grin. 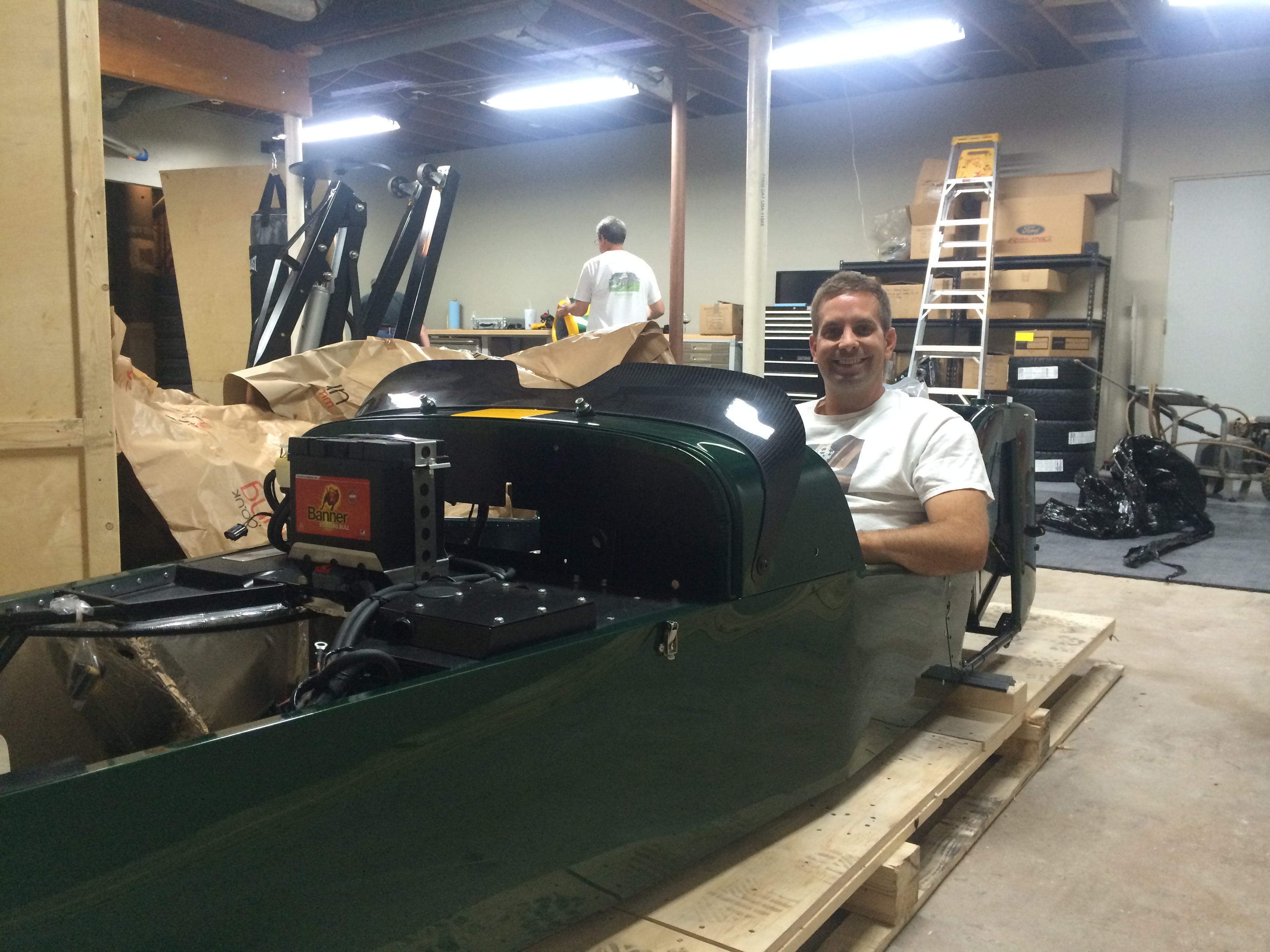 A shot of the dash. I should have gone with the carbon… 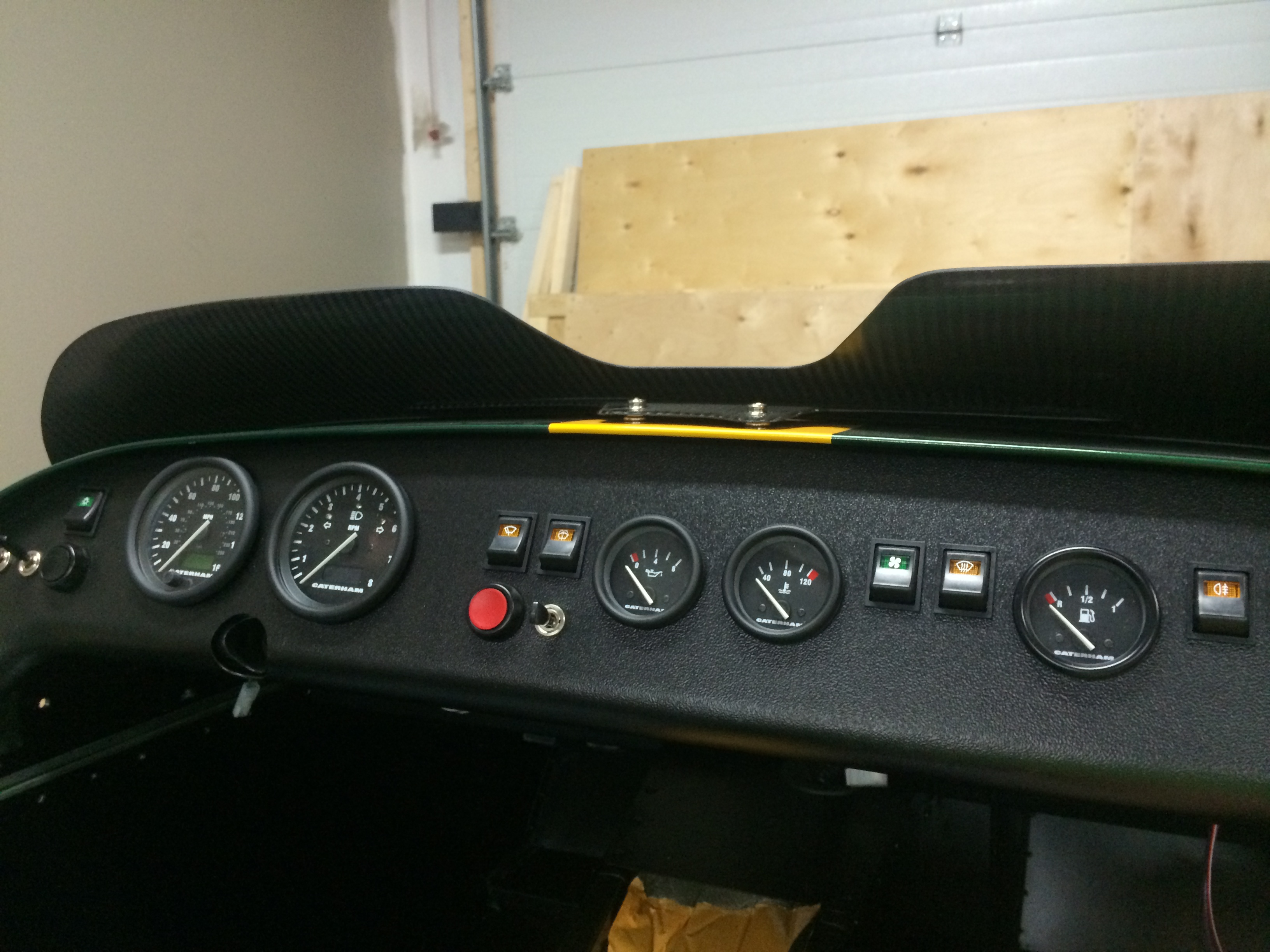 And with that the green one was here; somewhat anti-climactic but I feel measurably better knowing she’s here safe and sound. Next step is to get it on jack stands and start the inventory process. I’m sure, based on other blogs I’ve read, there will be parts missing and the sooner I get those figured out the better. I’m ready to get this thing going!