It’s been just under a year in the making and today was finally the day to open the boxes up. You’d have thought it was agony waiting a couple extra days but quite honestly it was really pretty easy – I had so much going on at work and getting ready for the party I hardly had time to even realize “zomg my Seven is in a box downstairs”.

Going into the morning it was a little helter-skelter; getting the house cleaned up, getting setup for the party, last minute odds and ends, and so on. Jimmy helped prep and Kim ran around cleaning bathrooms once she arrived.

I was down in the garage straightening up, making sure the DeWalt cordless screw guns were charged, pry bars available, hammers where they should be, and music good to go. A quick shower at 10:30 and I was set right on time; Randy showed up literally as I was walking into the kitchen.

With Randy here, I left the cooking to mom and Kim, while Randy and I went down to the garage to start prepping the crates. There was a ton of screws in there to pull out and most folks wouldn’t want to stand around waiting for us. We also needed something to cut the metal bands on the tall box – the diagonal cutters I have couldn’t do it and thankfully had the Dremel stashed close by. Randy worked on the bands while I started pulling screws out of the boxes… there are a lot of screws in there. All that work made me thirsty, took a break to liberate a beer from the fridge. 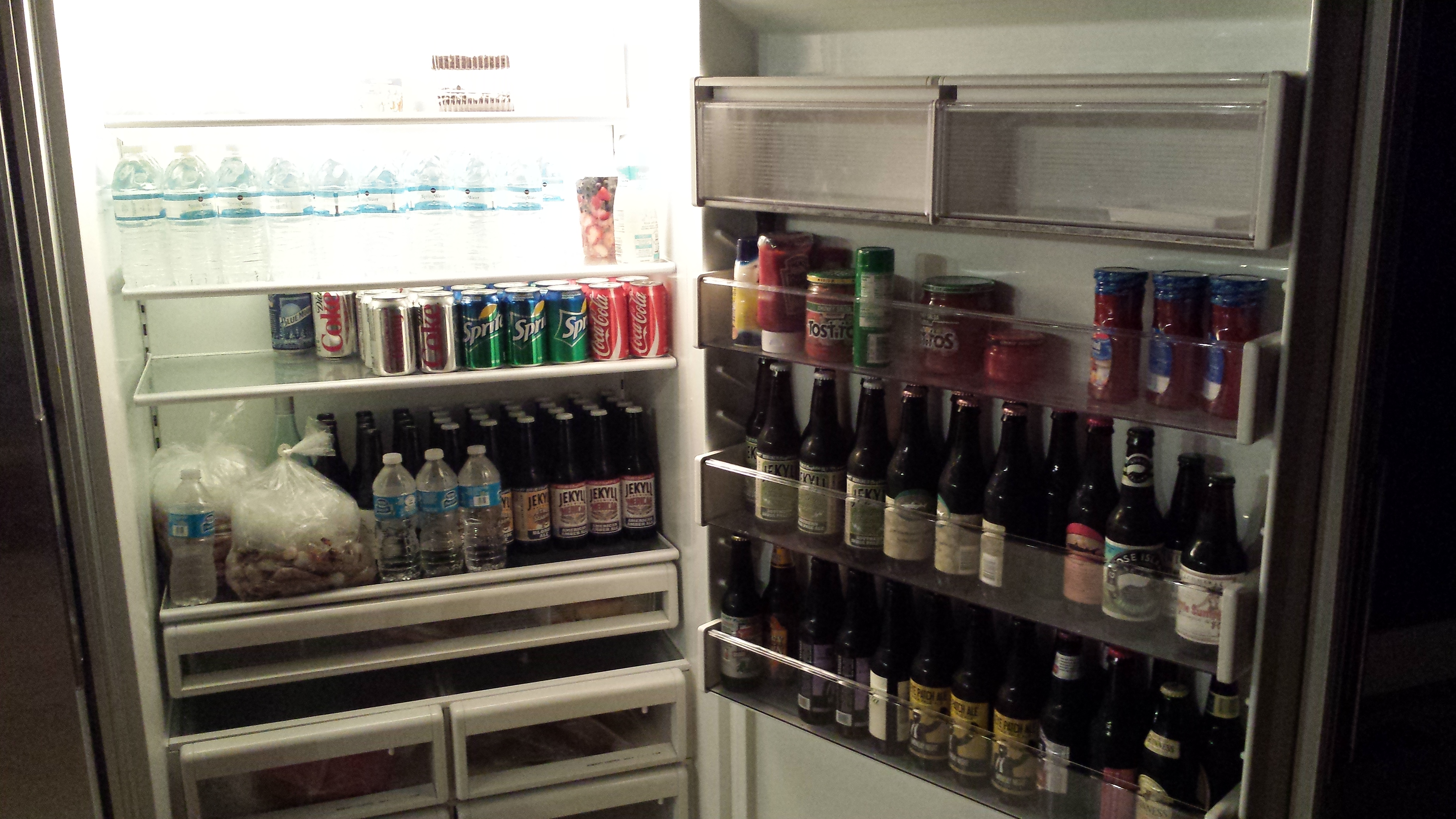 As we continued loosening things up Kim came down and started snapping pictures. 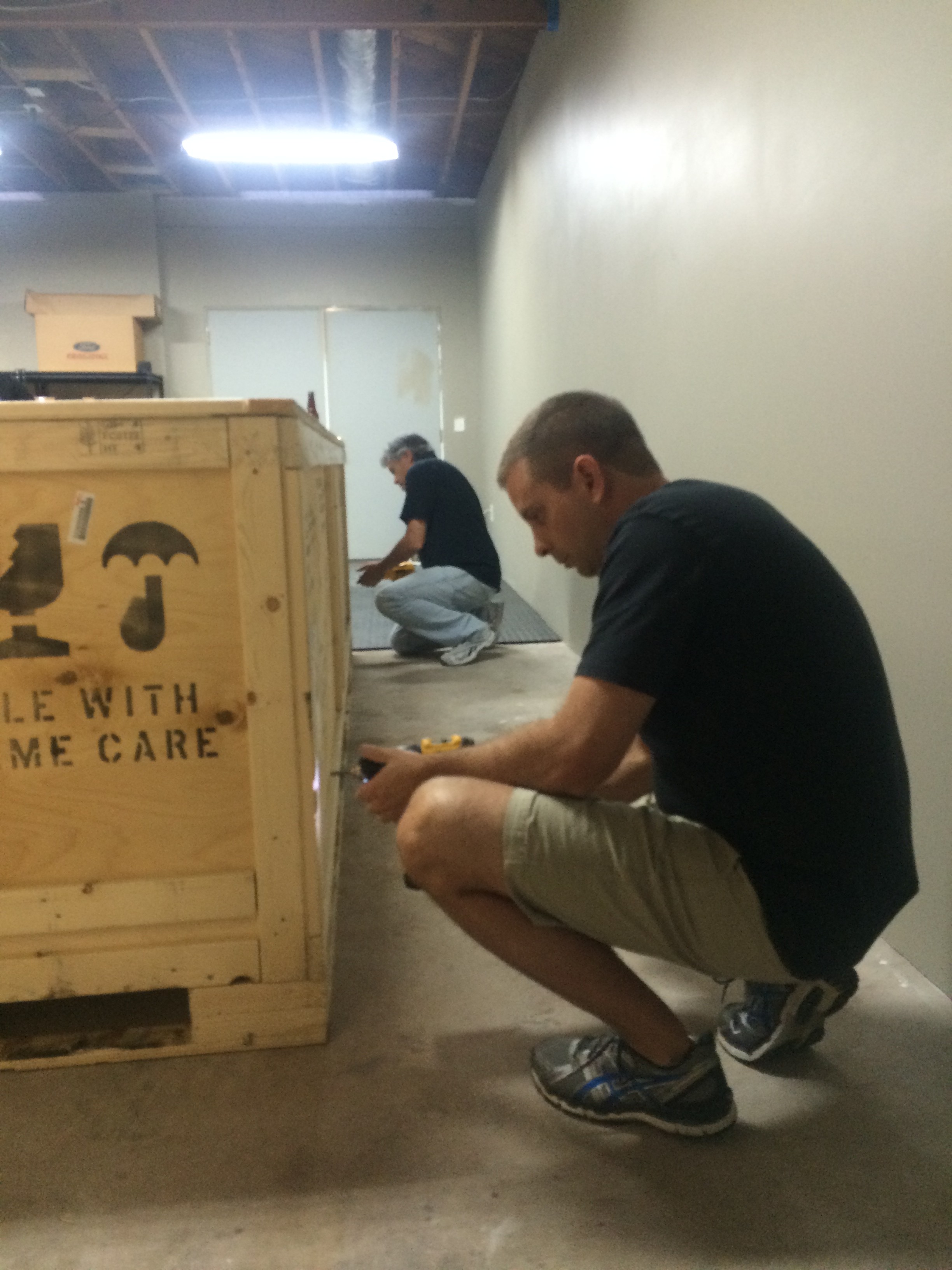 I’m not sure exactly when it happened, but I looked up and all of a sudden there were people here. On time. Like to the minute on time. I told folks to be here at noon, crates would be opened at 12:30 on the dot, that way people could be fashionably late and nobody would miss the opening (which was kind of the point of the party). And then everyone showed up exactly at noon… on time. WTF? So we stood around staring at each other for 30 minutes and everyone was like “dude, open the crates already”. I was like “I can’t, I told everyone I’d open at 12:30… we gotta wait. Eat some guacamole.” So we waited. 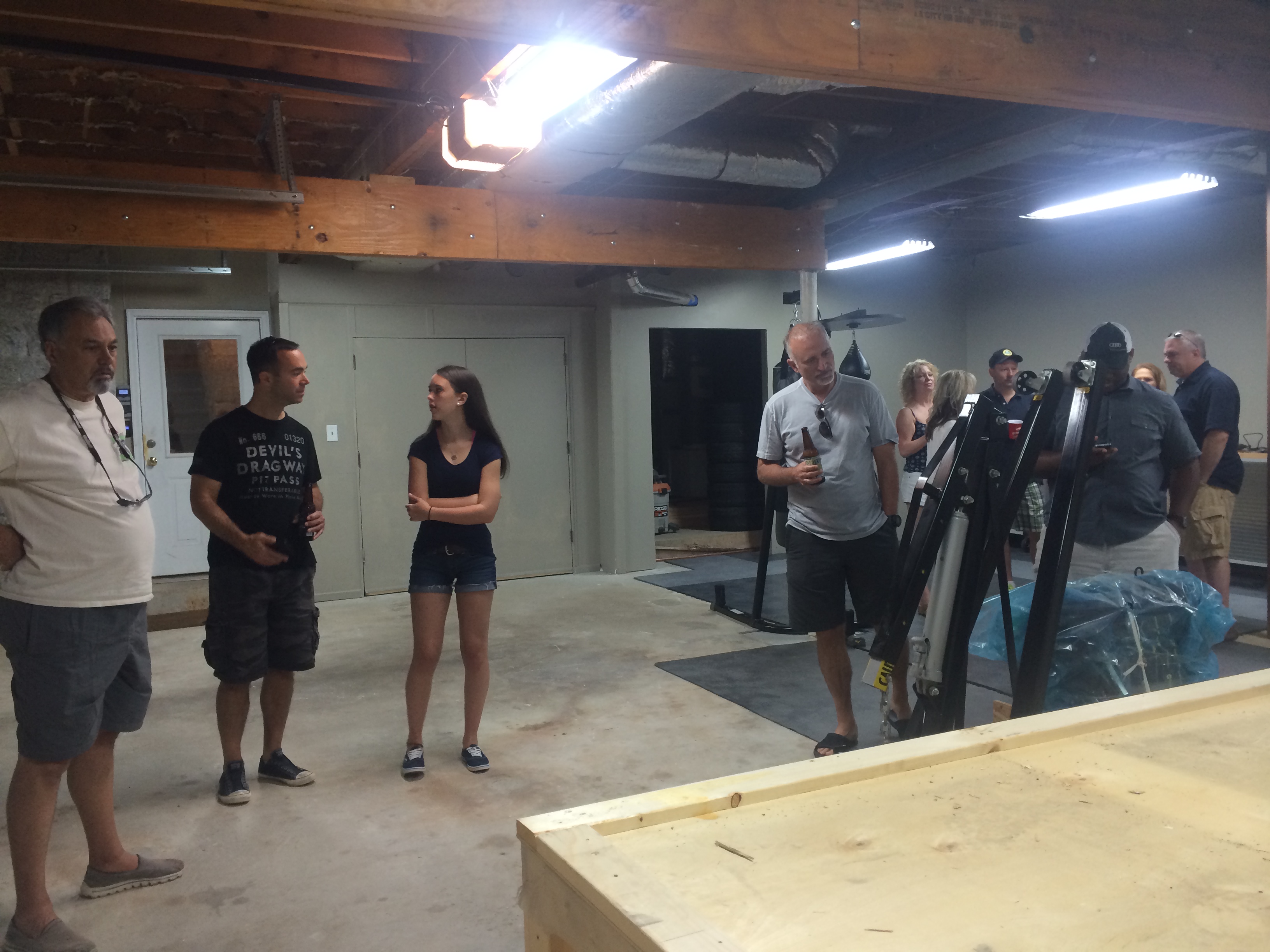 As we got closer to 12:30 I started getting excited, I guess it kind of all hit me at once; the dream of building a car, the long and often times misinformed wait with no clear direction on when it was actually going to be here, the challenge getting it the last mile and here by Saturday, and just the general state of patience. I read Michael Eddenden’s book, Why build a 7, I remember a line in there where the guy, while waiting for his Seven to arrive, makes the comment “I now know what it’s like to be forsaken.” Dude… I know exactly what you’re talking about. I still had that nagging fear in my head… what if, after all this, all these people here, it shows up and its the wrong chassis or entirely the wrong car?

When I was un-boxing, I wasn’t thinking much. I was excited, just letting myself feel, but nervous that something was off. When I pulled up the corner flap tentatively, and saw it was red, I was shocked… no fucking way. It’s like manifest destiny. The one major thing I was worried about… came to fruition. I just could not wrap my brain around that. And I knew I had about 2 seconds to figure out what to do next. When I pulled that cover off everyone was going to see red. They expected green; hell, I expected green!

But in that split second I figured there’s a couple ways I could deal with it. I could have…

So that was my attitude. Head up, on the bounce, making sure folks had a good time because that’s what really mattered to me. It wasn’t the car, It was having folks in my life there, together, creating a fun memory.

Which was followed very quickly by my internal monologue … “I can’t believe its red. Holy shit I need a beer” and made a beeline to the garage fridge to rescue yet another tasty morsel. I rescued some guacamole too; man that stuff is good (recipe on my previous post).

When I got back over to the car someone, I think it was Randy, said let’s see if the fenders match. And so we opened them up… and viola! They’re green! People can see green! Better yet, its the iconic nose cone with the 7 logo. 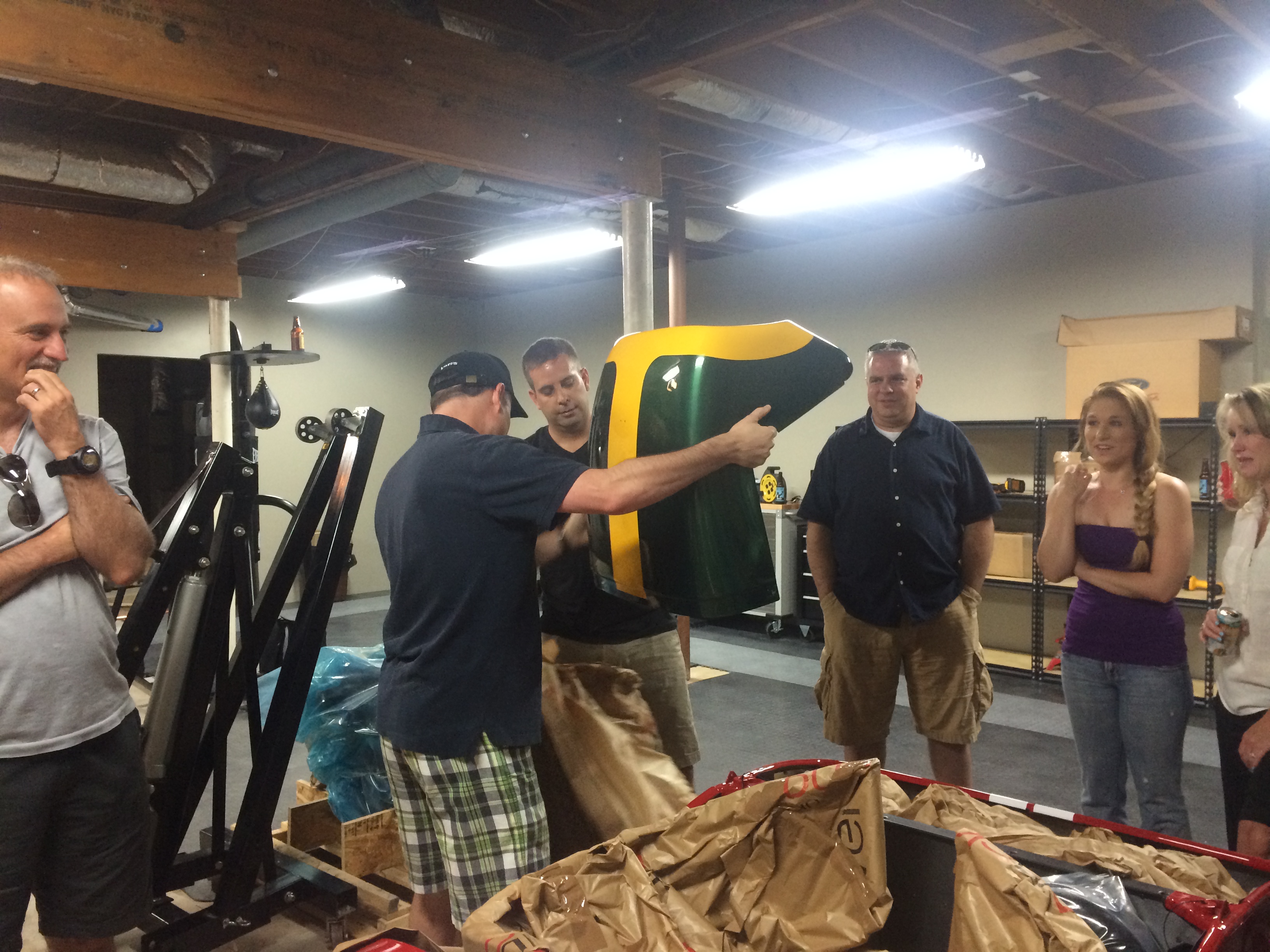 Holy shit that green is sexy! I love the color – was exactly what I wanted. Yeah… that’s the smile we were looking for. Now I’m happy. 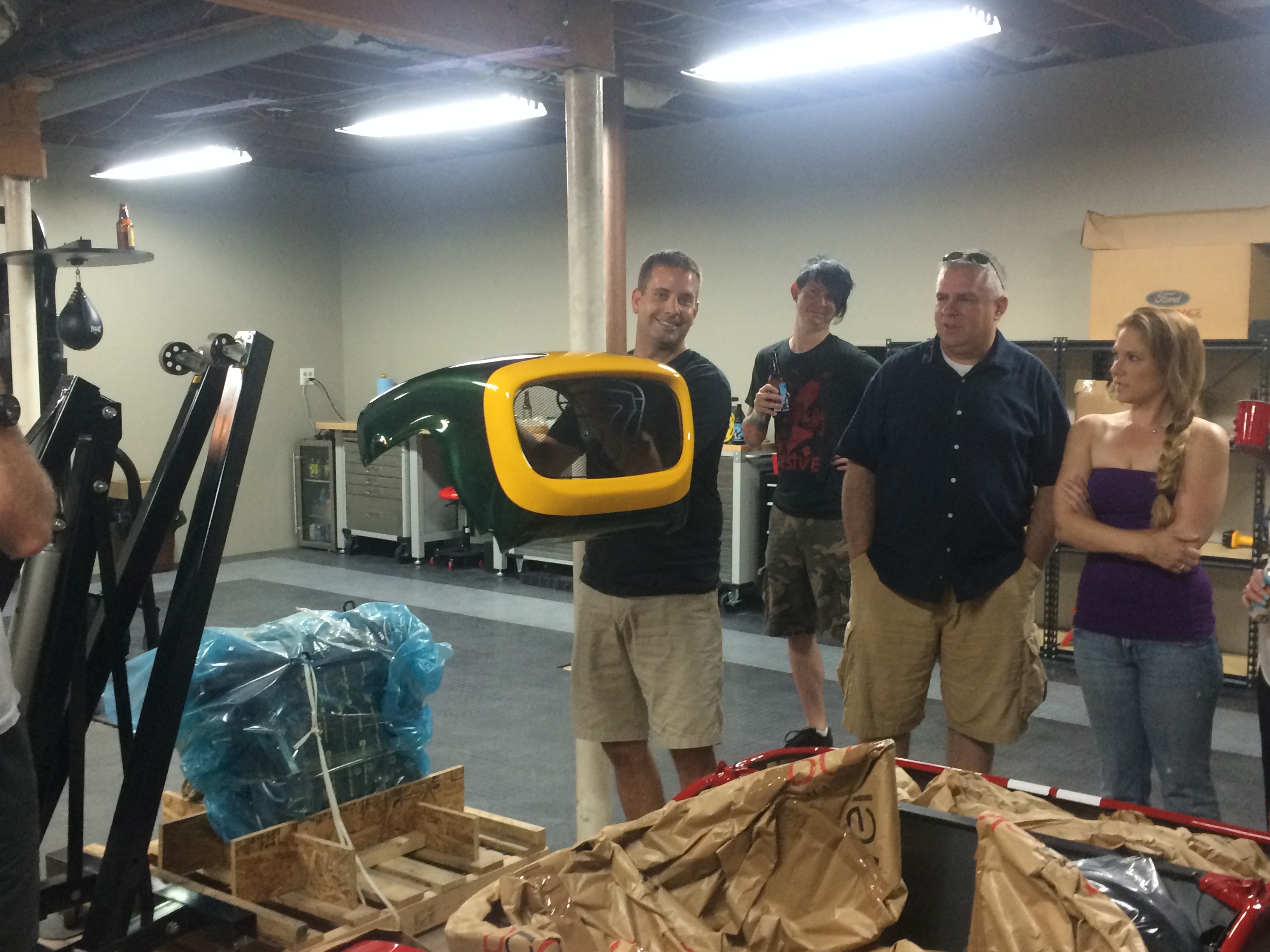 We then proceeded to unload everything from the car; more green fenders, more parts, all labeled correctly with my build number #11565. It was around that time we realized the red car was very close to my build number; off by one digit easily mistaken for another. This whole debacle was simply someone looking at a number on a piece of tape incorrectly. 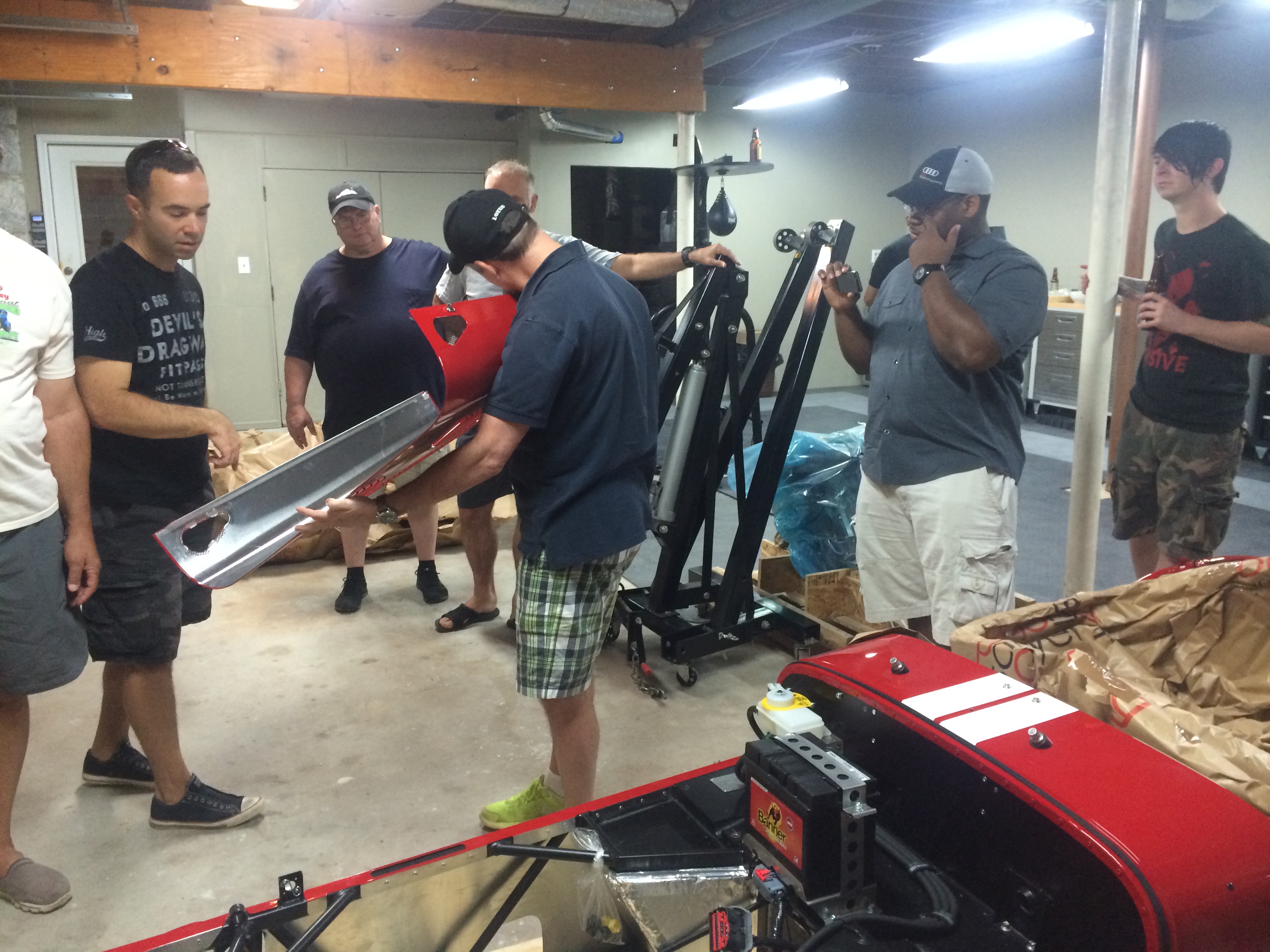 Kim caught a good picture of me, Facebook profile pic worthy I might add, with the red bonnet and the green nose cone as I was headed to the beer fridge to rescue one of the Drafty Kilt bottles (Monday Night Brewing). Of all the pictures taken I think this one is my favorite. 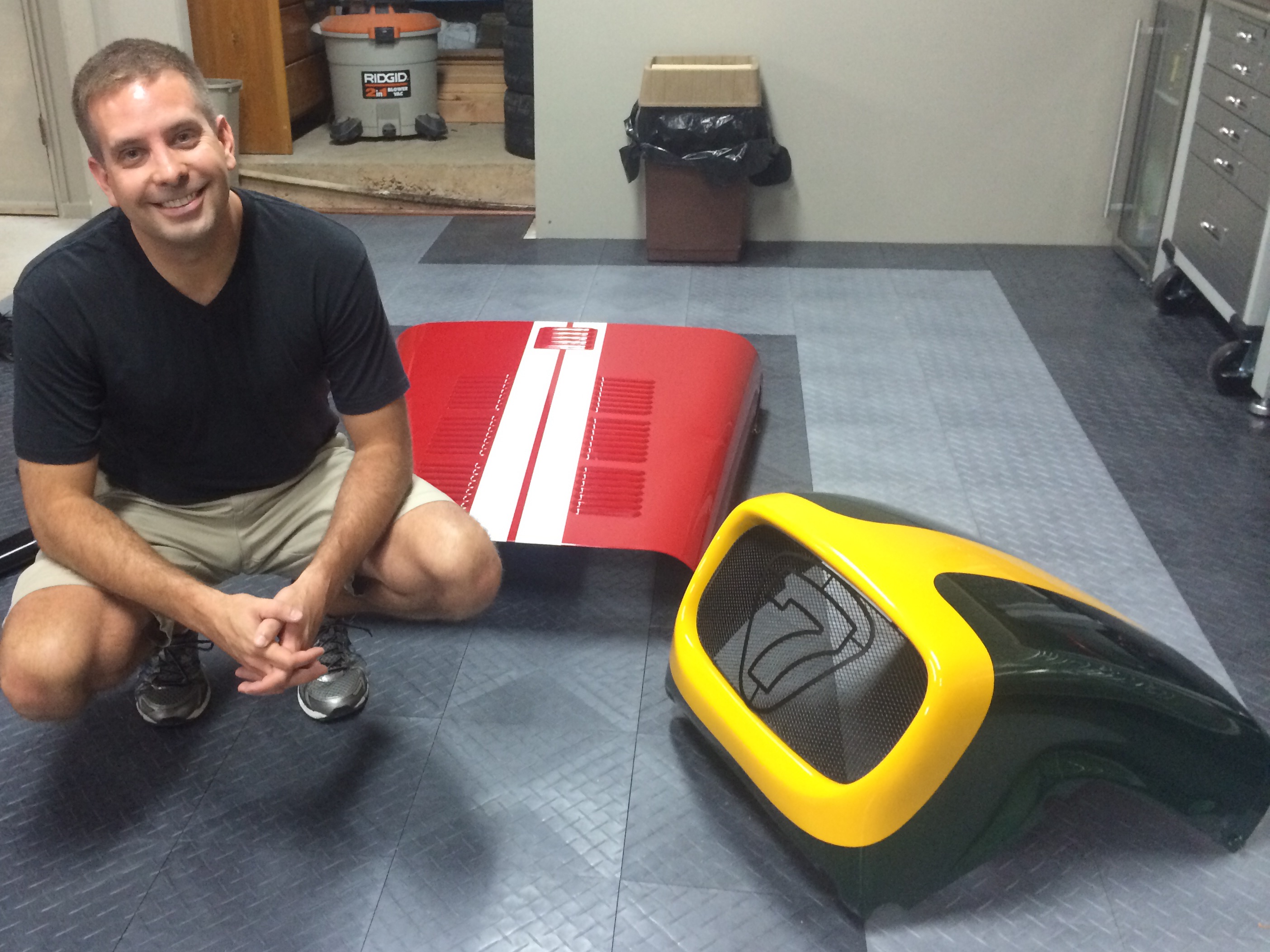 With the mystery solved, next up was unloading the tall crate. For that we acquired a ladder, pry bar, and hammers. This one wasn’t screwed together like the chassis crate – “hammers and nails, ladies, hammers and nails” (quote from Company of Heroes, a video game I played probably too much of many years ago). 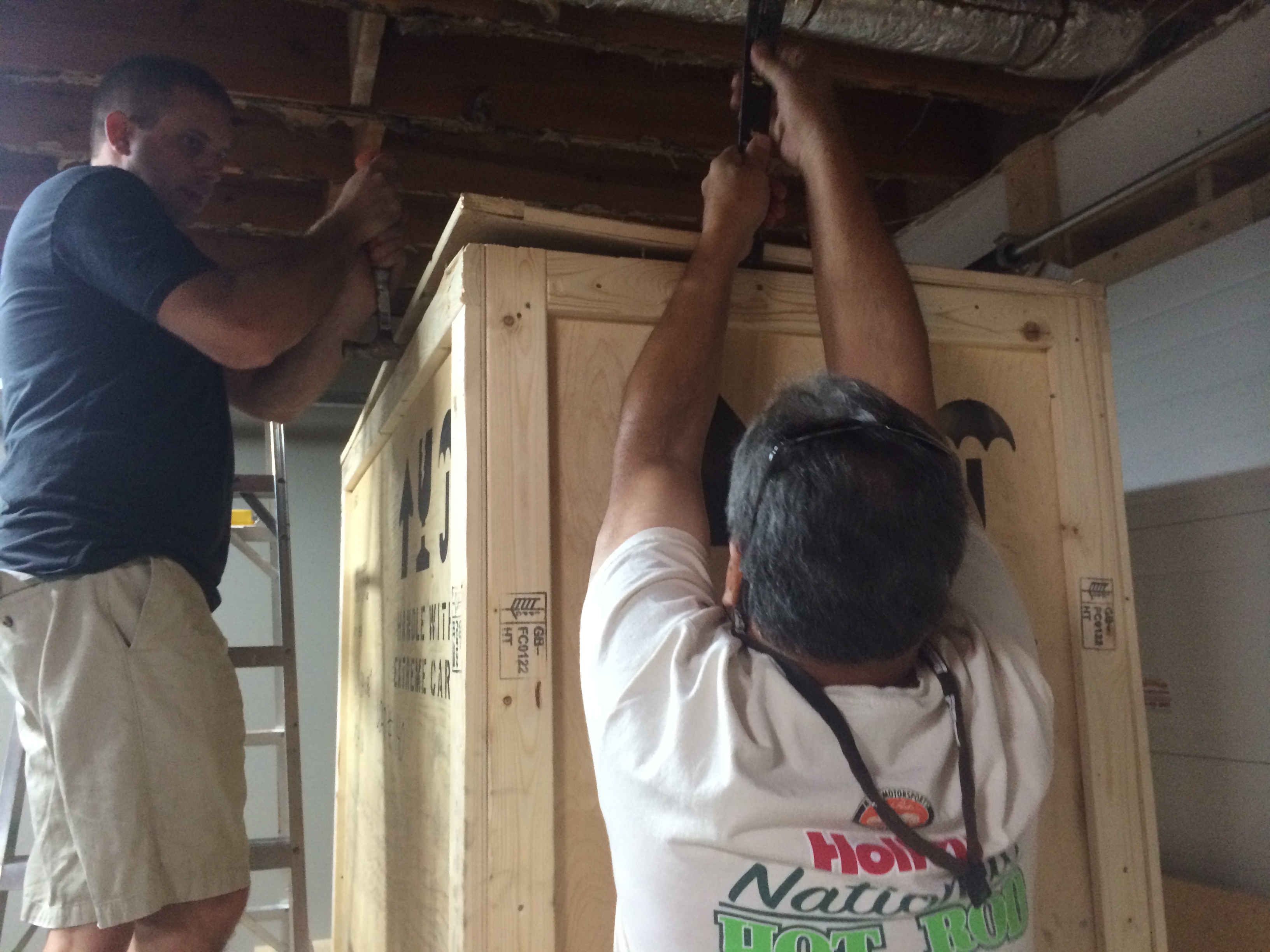 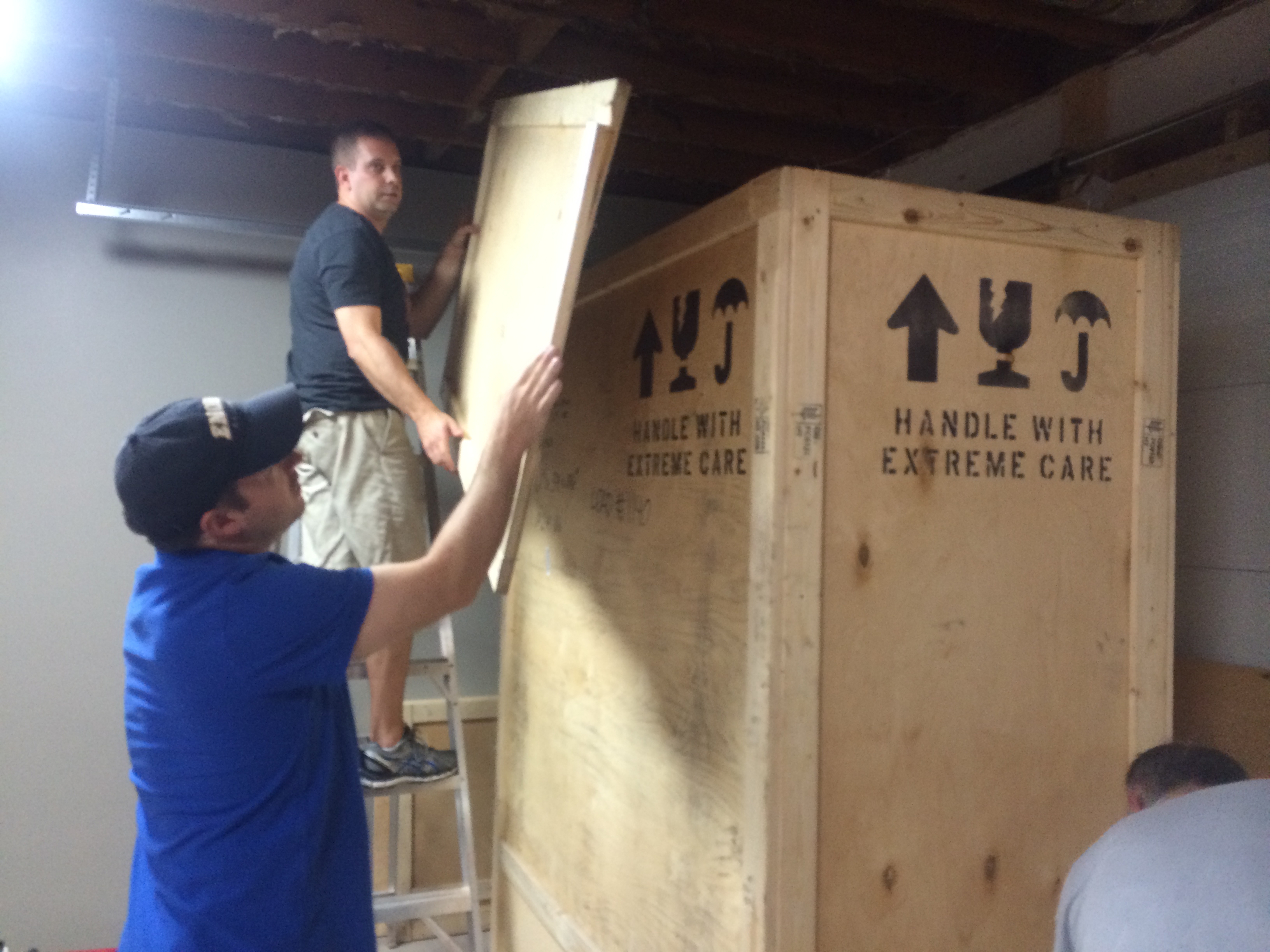 With the top off, I peered in and there was a pile of soft stuff within reach. I pulled it out, was the weather gear and carpet, but the rest I couldn’t reach and seemed to be in there pretty solid. Off with the front slowly to make sure nothing came falling out. 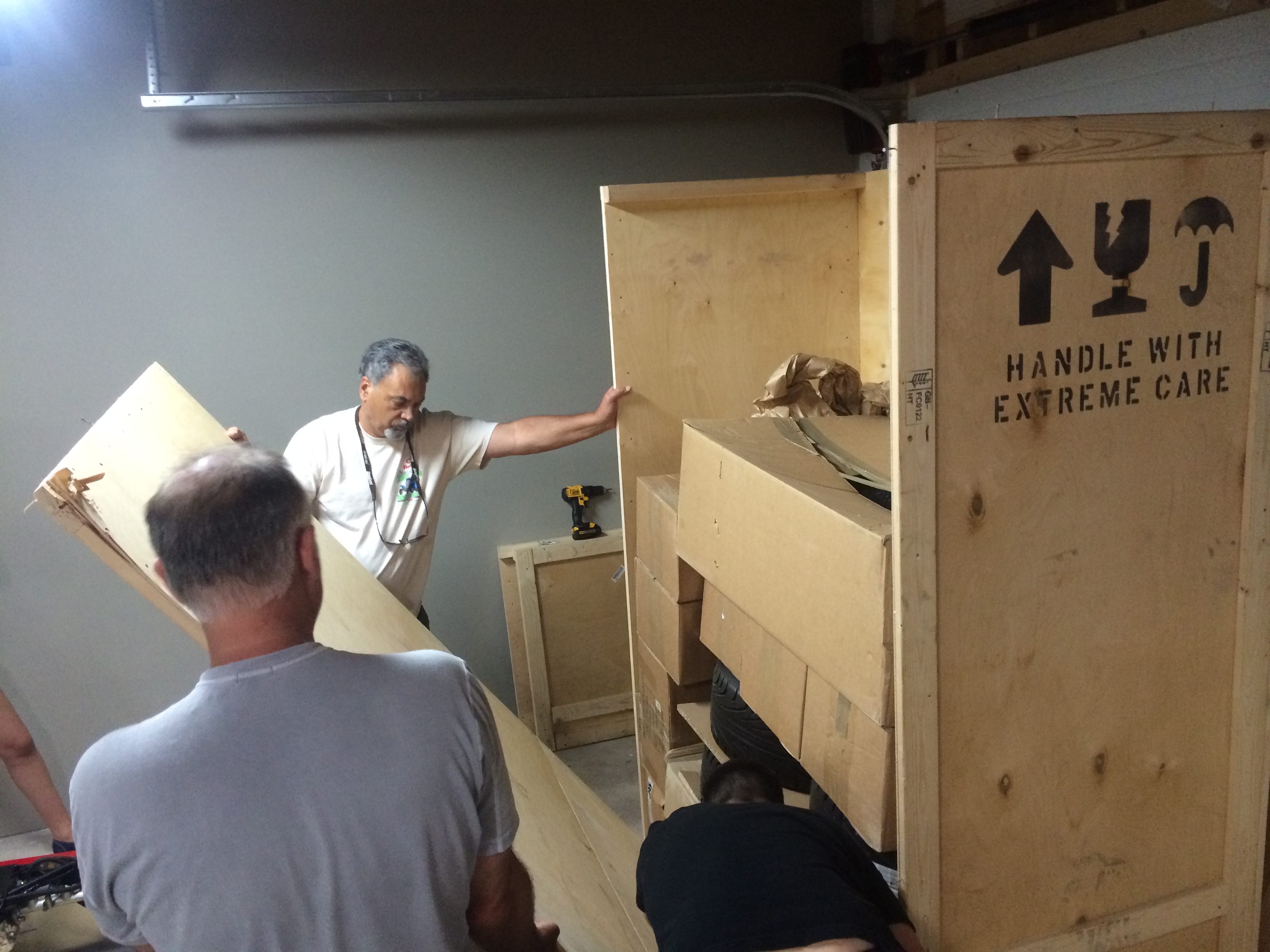 Ten or so boxes in there, heaviest stuff on the bottom and fragile stuff on top, all of it seemed to be in good shape with no major issues. 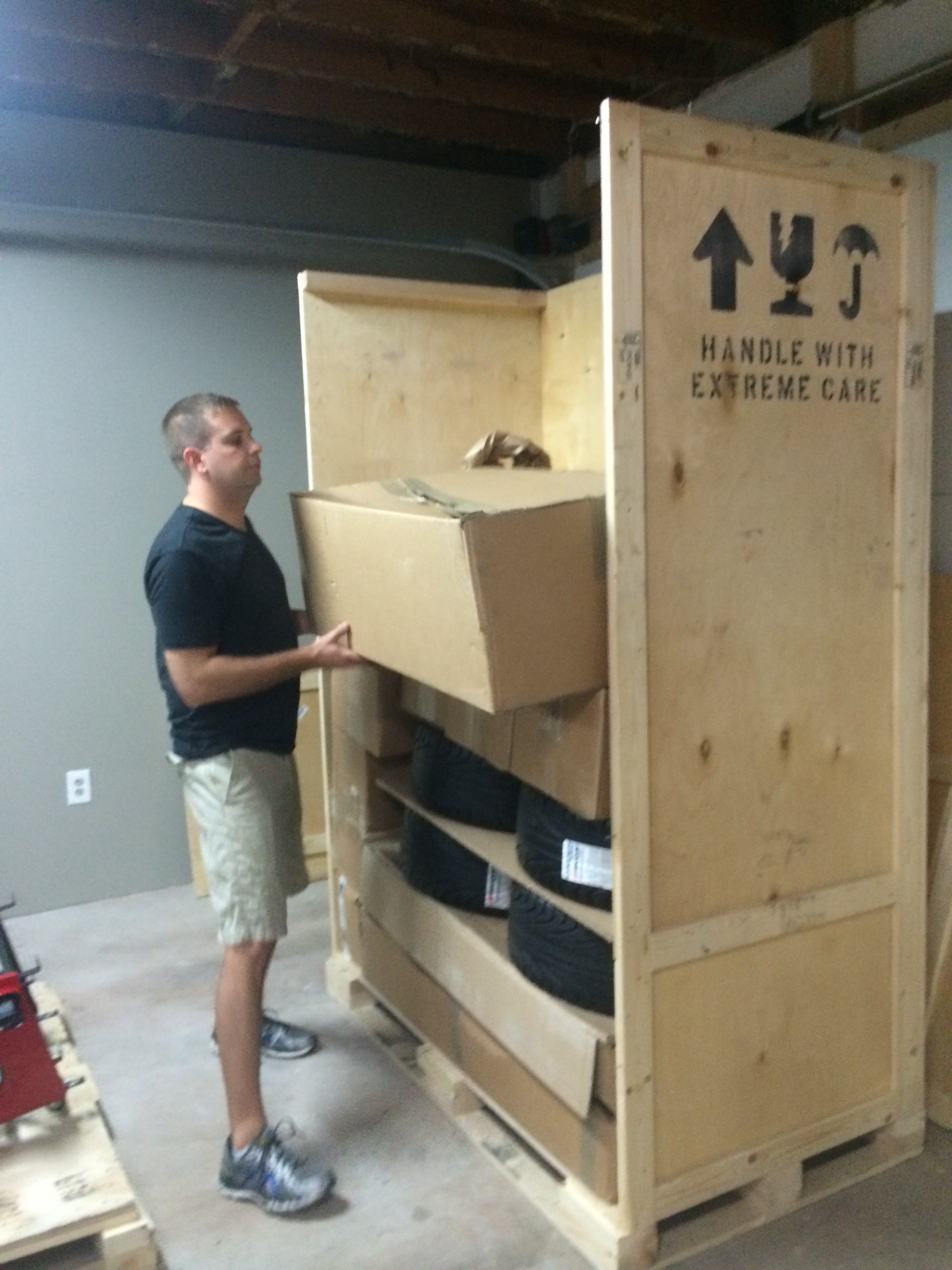 Once the crate was empty, folks milled around and checked out all the parts and boxes. It very quickly turned into a petting zoo of car parts.

“Hey, here’s the diff. It’s from BMW.”
“Oh wow, look, here’s the suspension box! A-arms, ooohhhh a de-Dion rear…”
“Anyone see the brakes? What kind of brakes? Did it come with pads? What kind?”
“What’s this do? Looks like … a brake line. No… hey, Dan… check this out…”
“What’s a wide track suspension?”

Everyone had a great time going through the parts. Based on my observations, everyone enjoyed getting their hands on all the parts and just seeing what goes into actually building a car. Car-people look at them with a sense of majesty, non-car-people look at them with a sense of distrust. It’s an interesting difference; but regardless, when you explain to someone, car or non-car person alike, what that part does, how it works, and they see your enthusiasm for it, you see their perspective changing. It’s a fun process to watch. 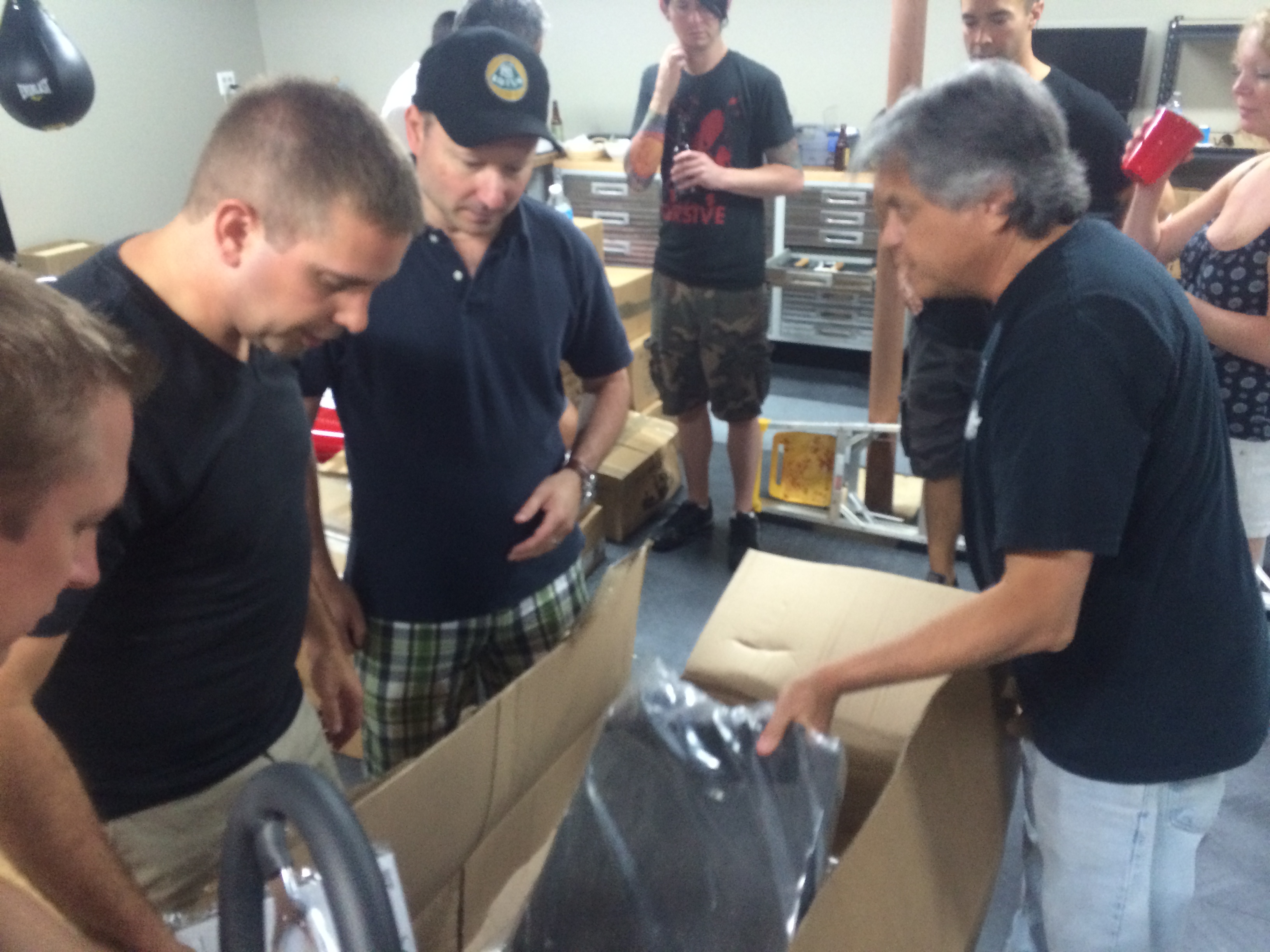 With the excitement over, most folks wandered back upstairs to the kitchen to get food. A small group of car diehards, more interested in the Seven than the food, stayed behind with me to organize things a bit. I also needed to take care of something I noticed when I first unwrapped it; a small dent in the bonnet.

The dent wasn’t from us. In the video, when we un-box, you can see where the cross-member was broken prior to un-crating. That cross-member was right over the dent and was either a) broken during install or b) broken during shipping. Either way, I feel bad for whoever’s car this is, it’ll be another headache to deal with, but at least it’s in the bonnet and not in the car itself. Fixable and/or replaceable. 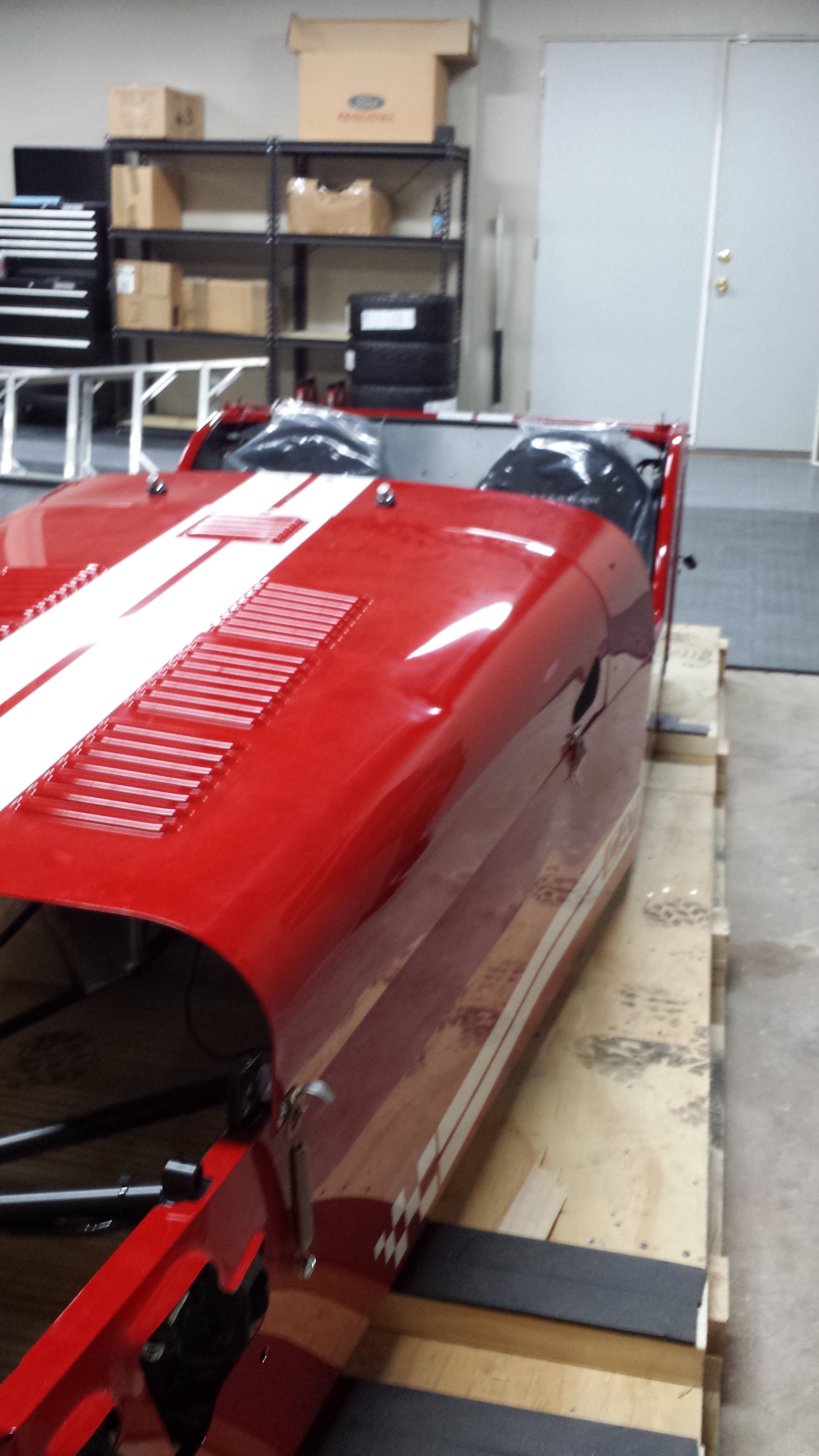 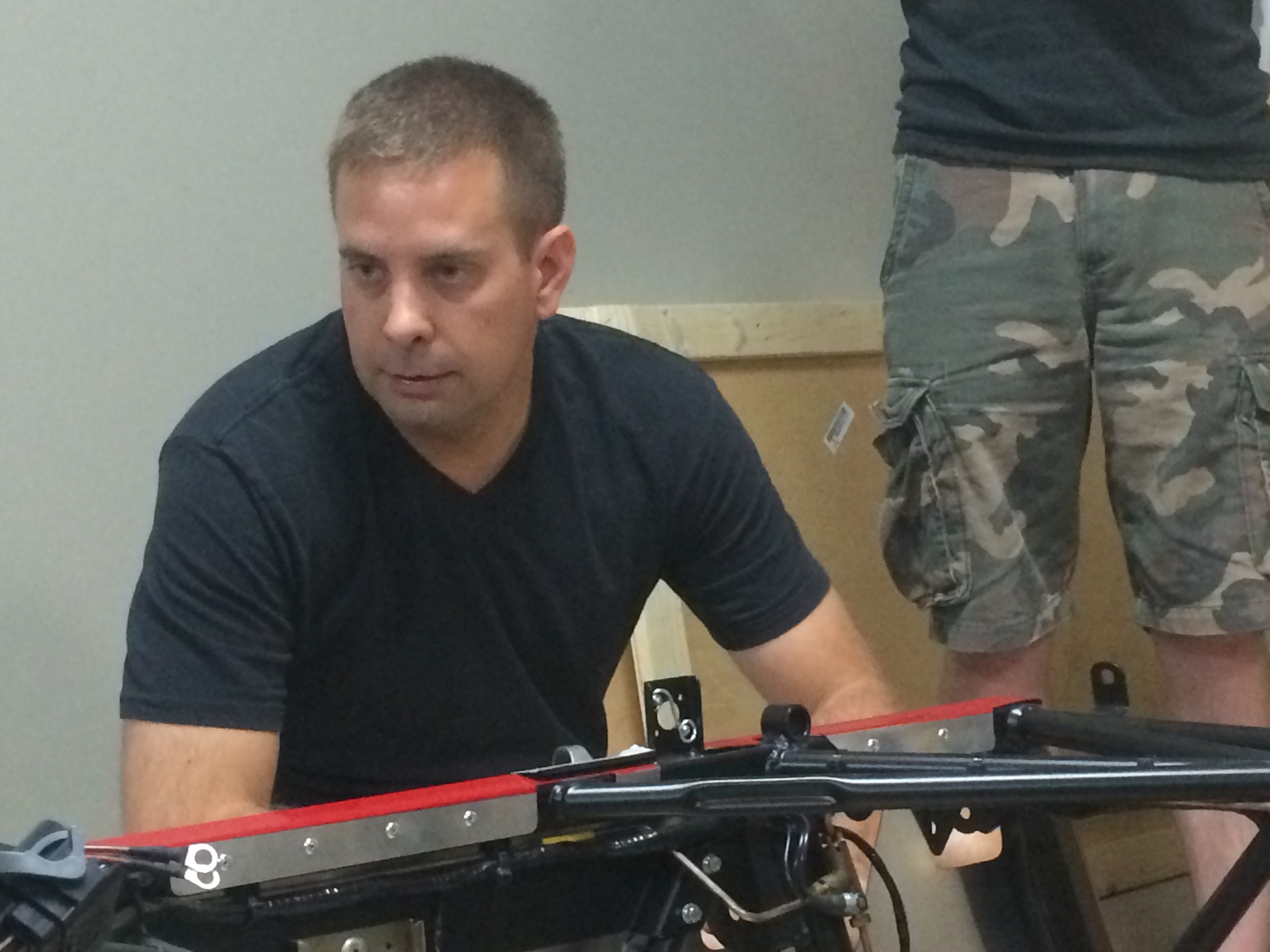 The red Superlight. Red looks pretty hot; the stripe up the bonnet looks great too. No idea who bought this one but they picked well. I wonder if they have buyers remorse after seeing the green one though. The carbon dash is gorgeous; I went with the plain-Jane black plastic. Immediately regret the choice. Speaking of buyer’s remorse… 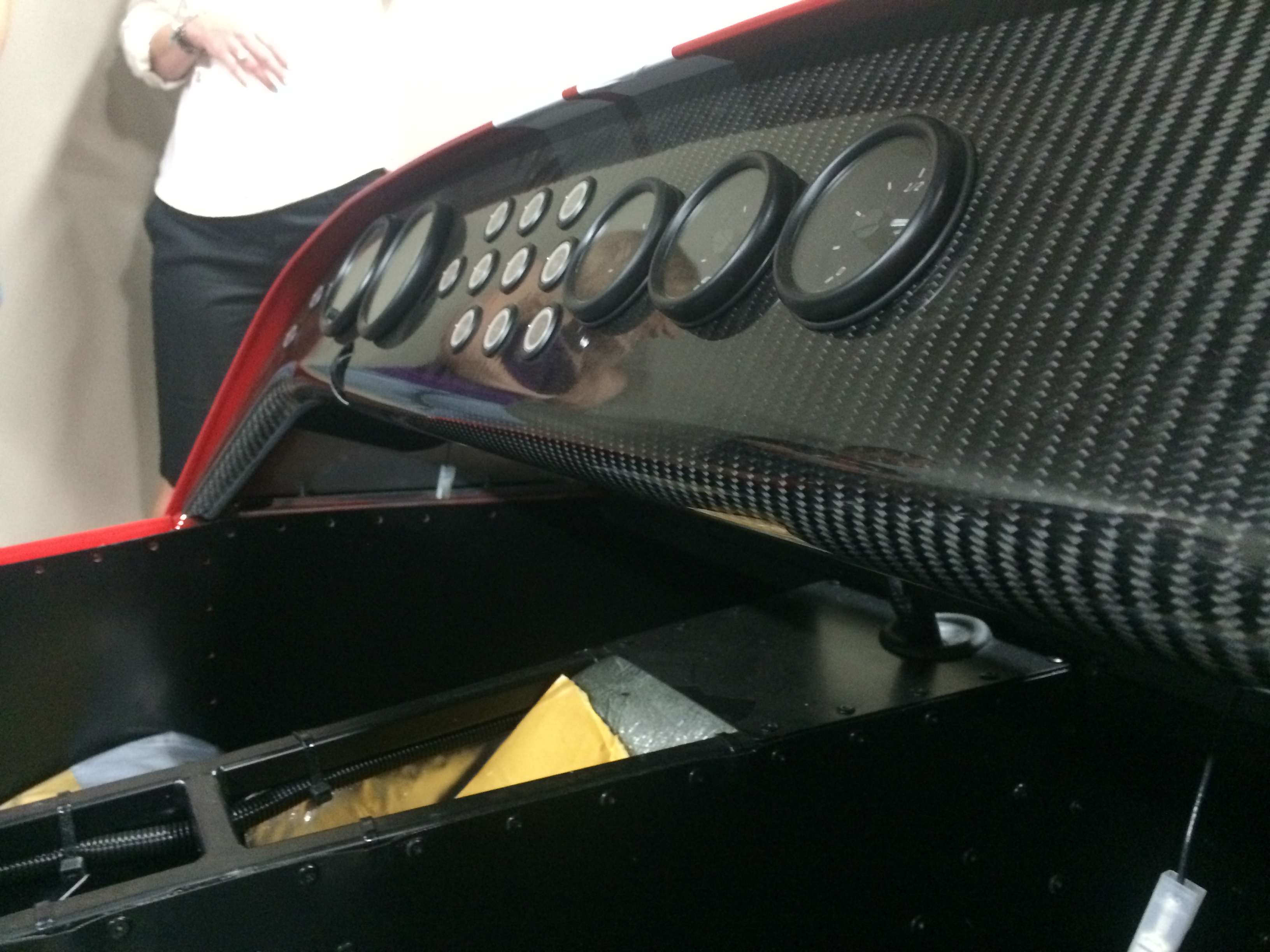 Knowing the car had to go somewhere else, since it was someone’s car based on the build numbers we found, it was time to box it back up while I had helpers… and we were still waiting on the low country boil to finish up; cooking for 30 takes longer than anticipated. 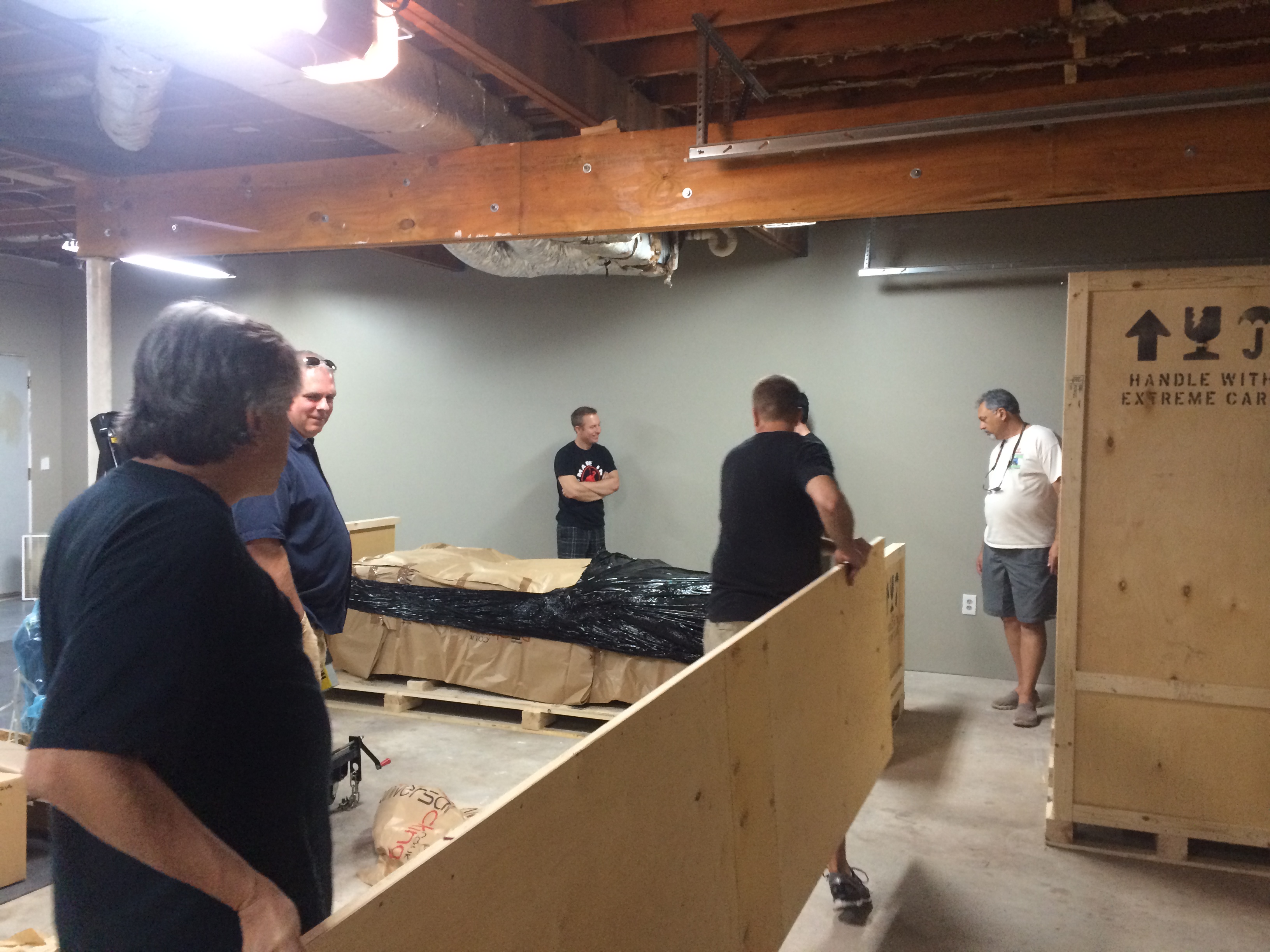 I thought it’d be fun to leave a note / easter egg for the real owner; hope they contact me. Would be fun to have an account-a-build-a-buddy during the process since we’re both building essentially the same car. It’s also good to know I’m not balding back there. 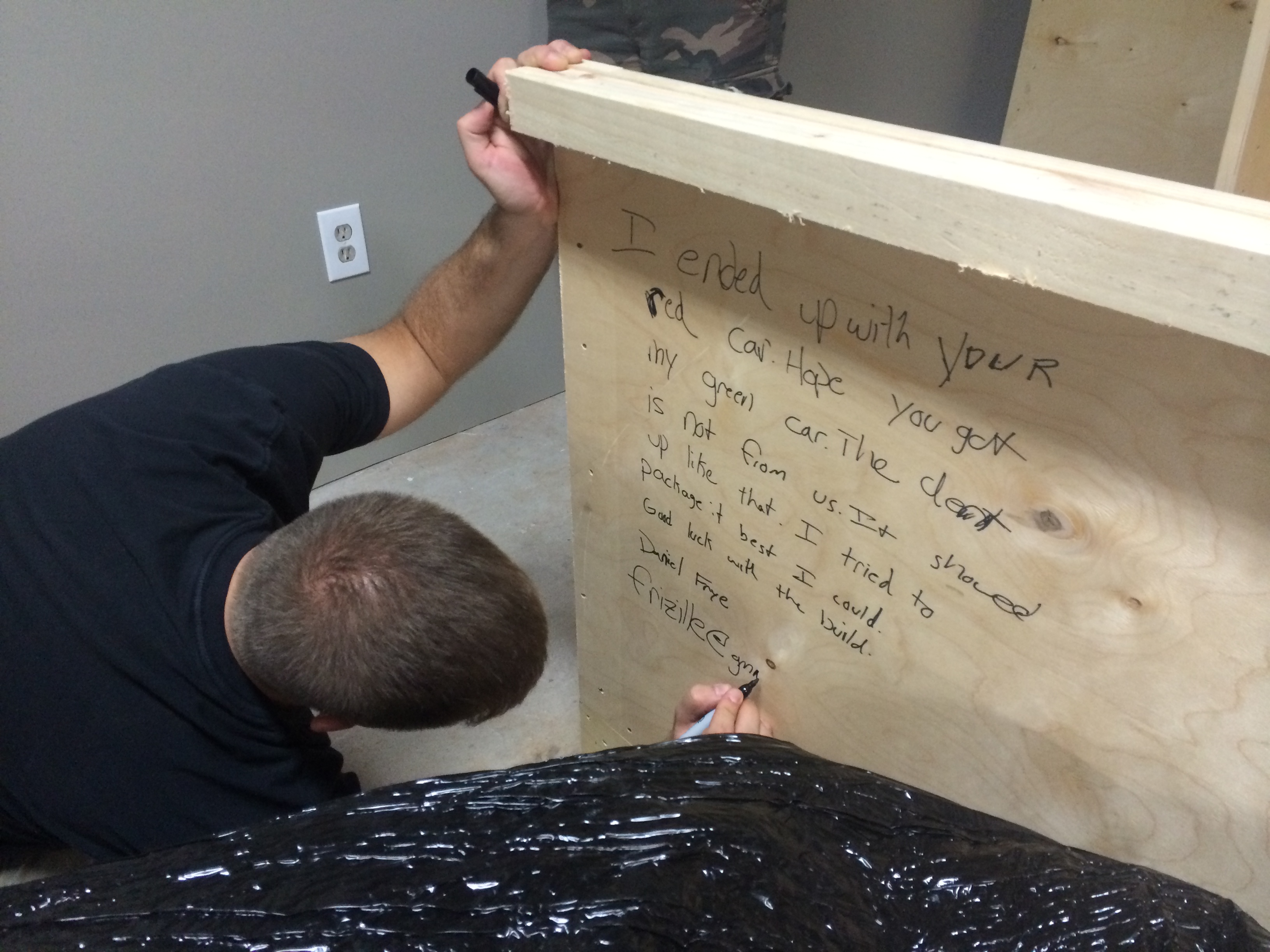 With the un-re-boxing completed, we gathered around the crate and said our final farewell. We also couldn’t find the plastic wrap … so loaded it with all the paper stuffing we could find in an attempt to keep any moisture off it should the box encounter water (and more stuffing never hurts) and didn’t want the questionable cross-members from causing more damage. 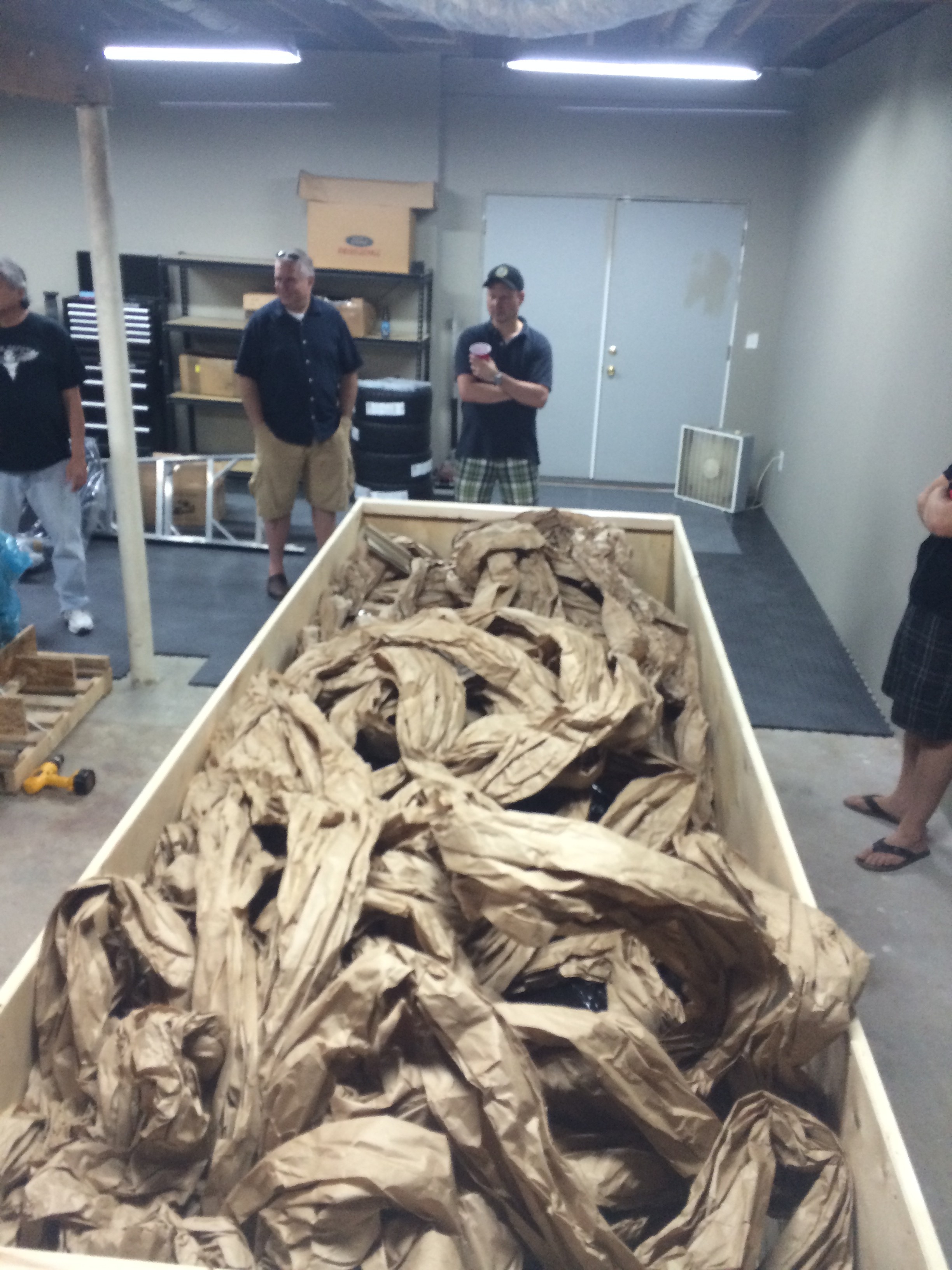 With that task completed, we headed back upstairs to dig into the food. Timing was perfect; fresh off the stove. If you’ve never done a low country boil before you owe it to yourself to do one. It’s a fun social food – you just dump it out on paper and let folks grab what they want – while conversation flows around the table where the food is dumped. 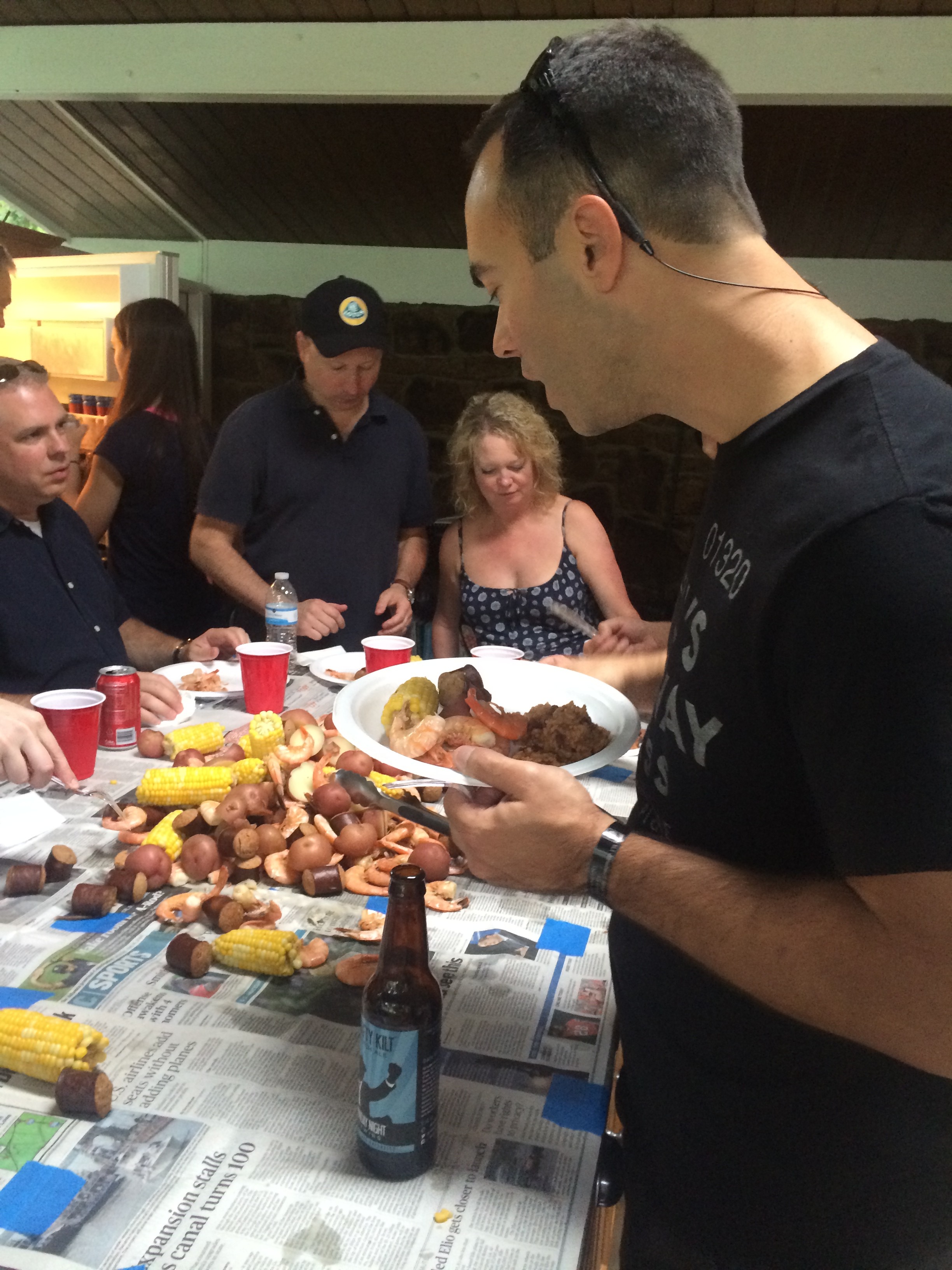 Once the food was mostly devoured we did a toast with some reserve Korbel Champagne I bought back in April when we were touring the Korbel winery; great stuff and I usually don’t drink champagne. About this time it was also revealed I had a gift from the group; it was a homemade-one-of-a-kind set of Lotus 7 pictures with some places for before and after pictures. Keith was up late the night before putting it all together; man, I can’t say how much I love it. It’s awesome. Made the entire day worth it. Thanks, Keith (and whoever else was in on the surprise)! 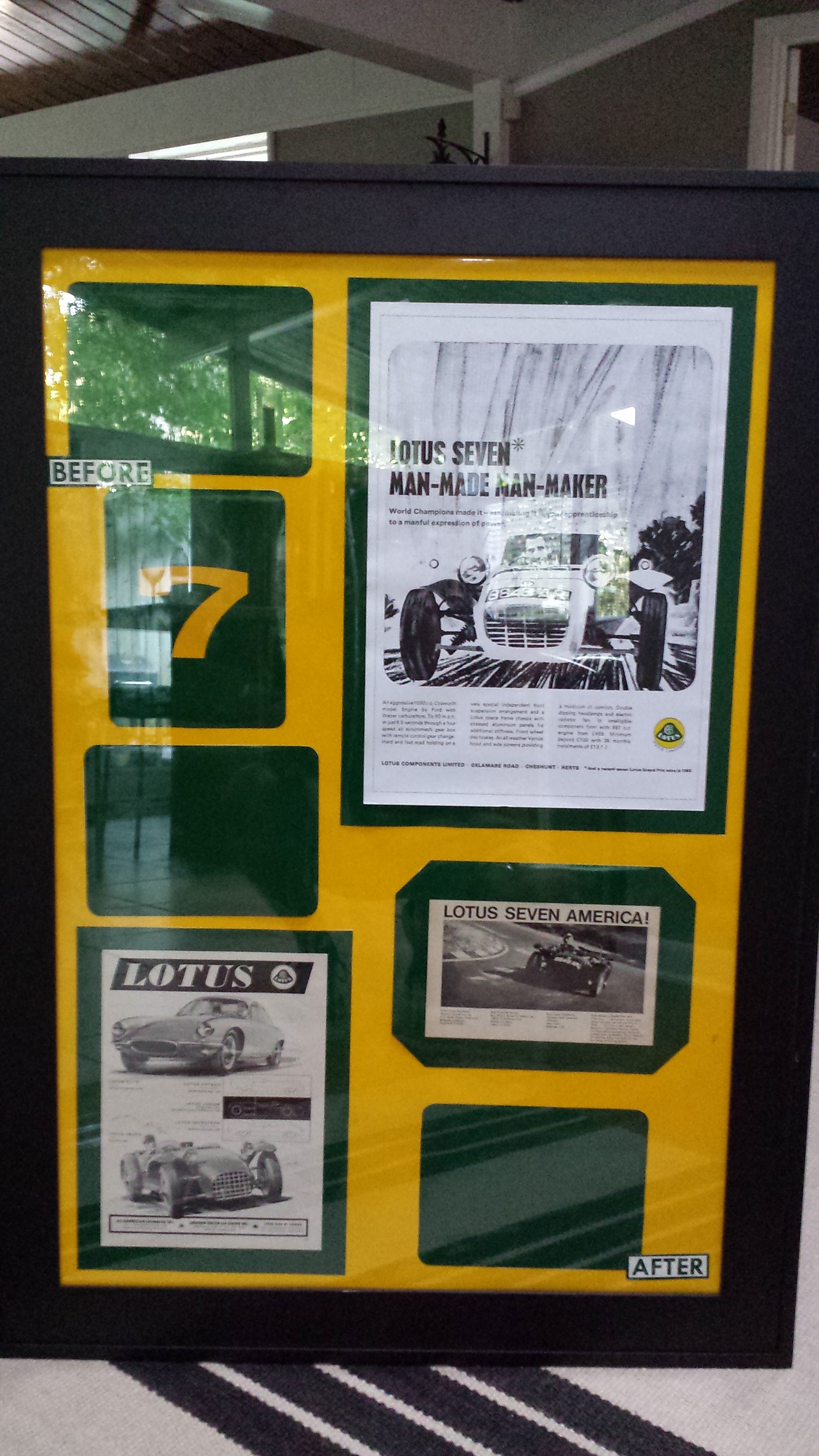 About that time most folks started wandering home. I went outside with Jimmy and his dad, who are in the process of rebuilding a late 50’s Chevy, and took a peak at their project car. I forgot to take some pictures but the car looked fantastic. It’s amazing seeing it now after a couple years of work – definitely something to be proud of.

After that, my mom and Doc said they were headed home so grabbed one last snapshot with them and a re-boxed crate in the background. All told it was a great day. Excited for the green one to eventually get here, which I’m sure will be sometime in the next week or two, but like I said earlier, having everyone together, watching them have fun and enjoy themselves was well worth getting the wrong car shipped here from England. 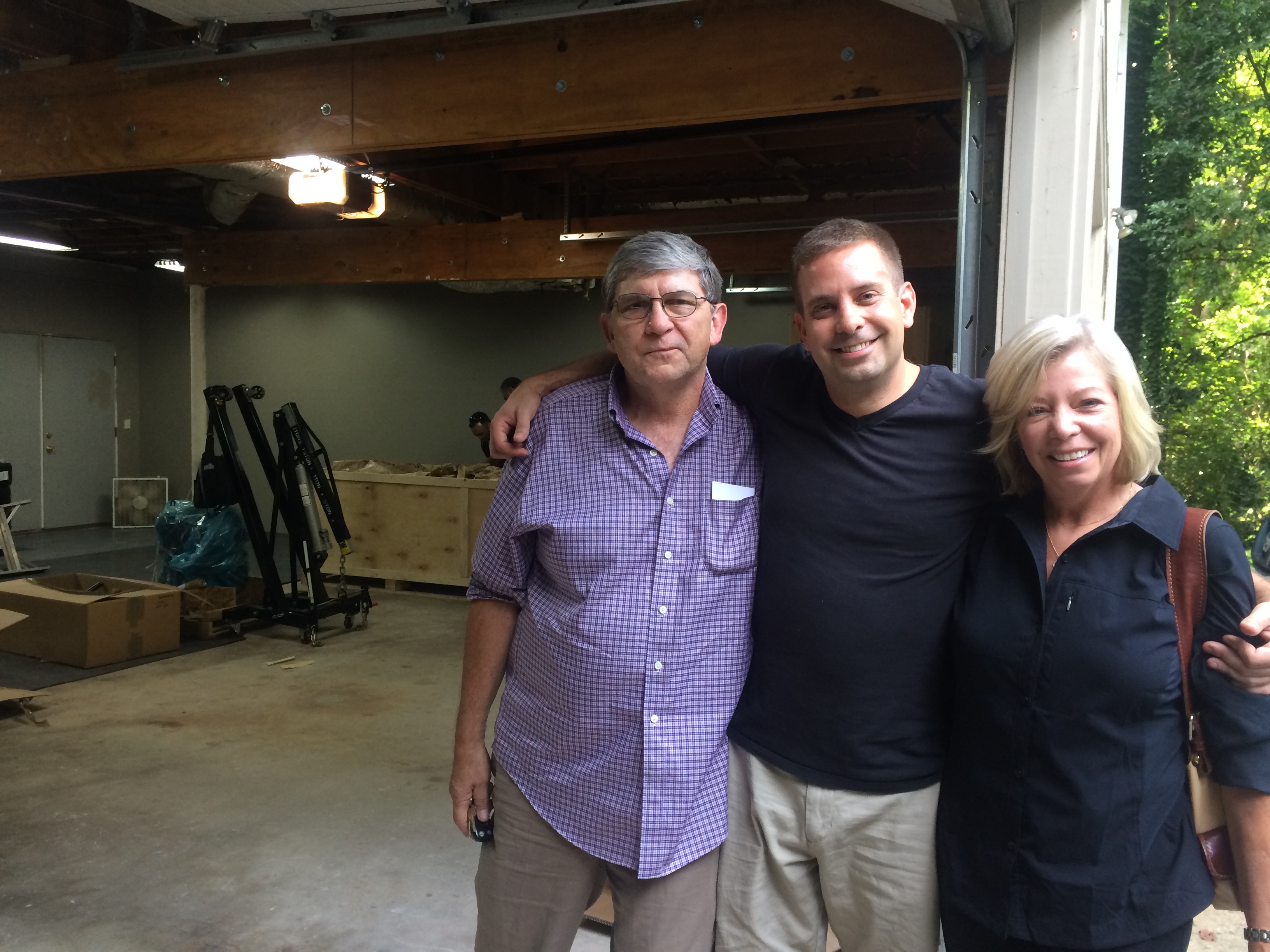