First up – Vinnie found me a green Caterham! Thanks Vin! 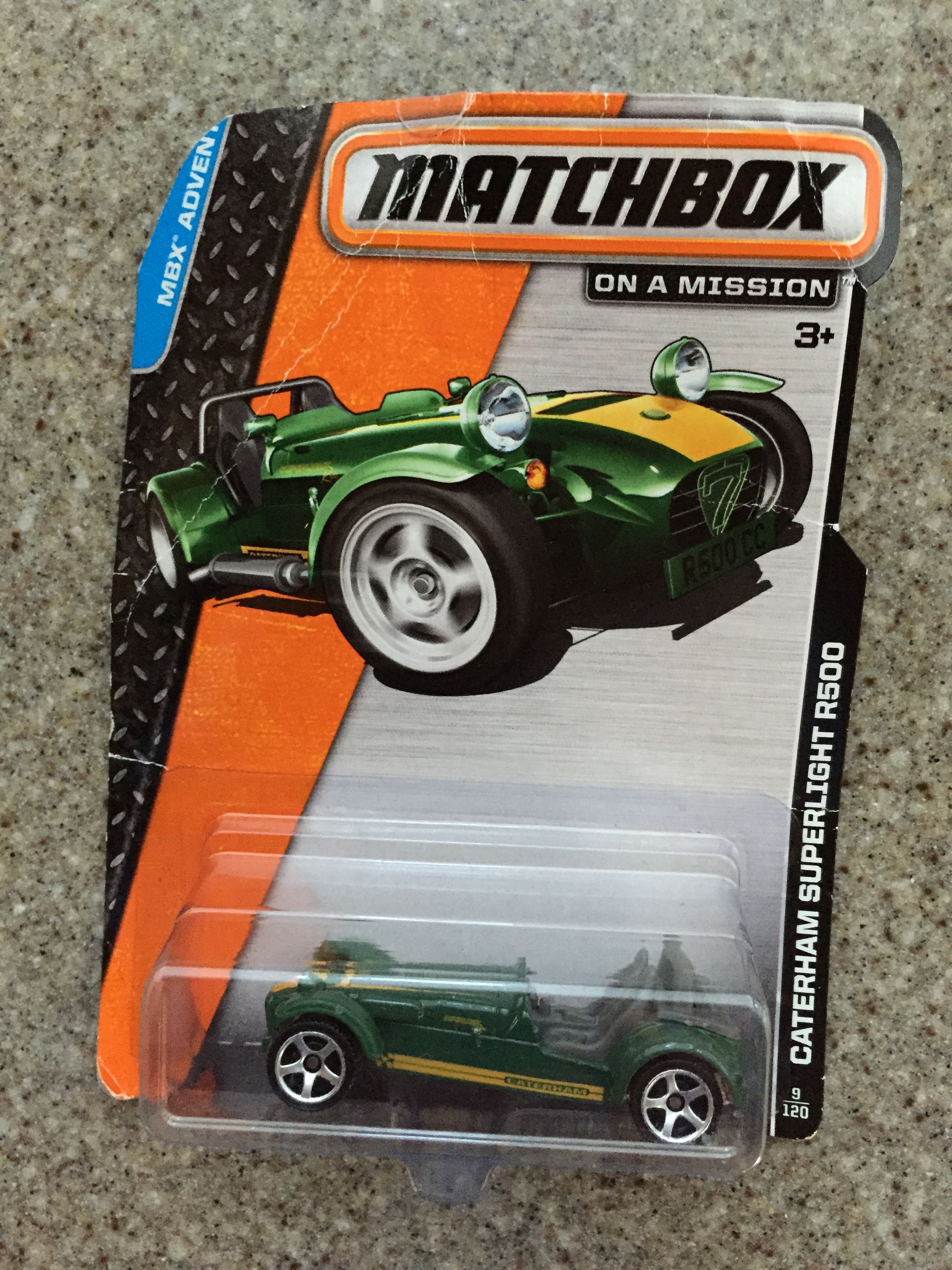 Adam and I chatted earlier this week and he said he could come by on Sunday to help me button up a couple things then maybe take this thing for a drive. A few weeks ago, around build day 35ish or so, I made a quick hit list of things to get done so I could see the light at the end of the tunnel. Initially, I had 37 things on the list with varying degrees of time required for each. Since the list got started, I’m up to 54… apparently you end up with new tasks as you go (or like me you’re like “ohh yeah…” and remember things later on you forgot to do).

But as of today, I’ve got 7 left and think we can hit all of them.

Kim and I started off the day about 9am by tackling the boot cover poppers since that would be the longest task and require the most patience. I also felt guilty wasting Adam’s time by doing something so non-mechanical. The popper bases were already attached on the car at the factory so we just needed to pull the boot cover taut, mark the location of the holes to punch in the cover, then attach the poppers. I’ve been putting off this particular task because it requires a lot of patience and measuring; neither is my strong suit. I’ll say it again – the leather hole cutting punch is key. Also, from Dave Fernlahone’s recommendation I got the fastener / popper attaching tool. It is also WELL worth getting and much better than the “durable dot fastening tool” supplied by Caterham.

Per the recommendation of the manual, we started with the two center poppers in the middle of the car. What we found to work the best was put some tape on the edge of the boot cover then pull it down and then push it onto the fasteners. This leaves a nice impression on the tape and let’s you get a sense of where they need to be drilled. After several checks, we determined each fastener needed to be punched throgh the cover at 23mm from the edge. On the sides of the car and at the corners we used 17mm. Things went very smoothly, much better than I expected, and pretty quickly we were done. All the poppers look great! 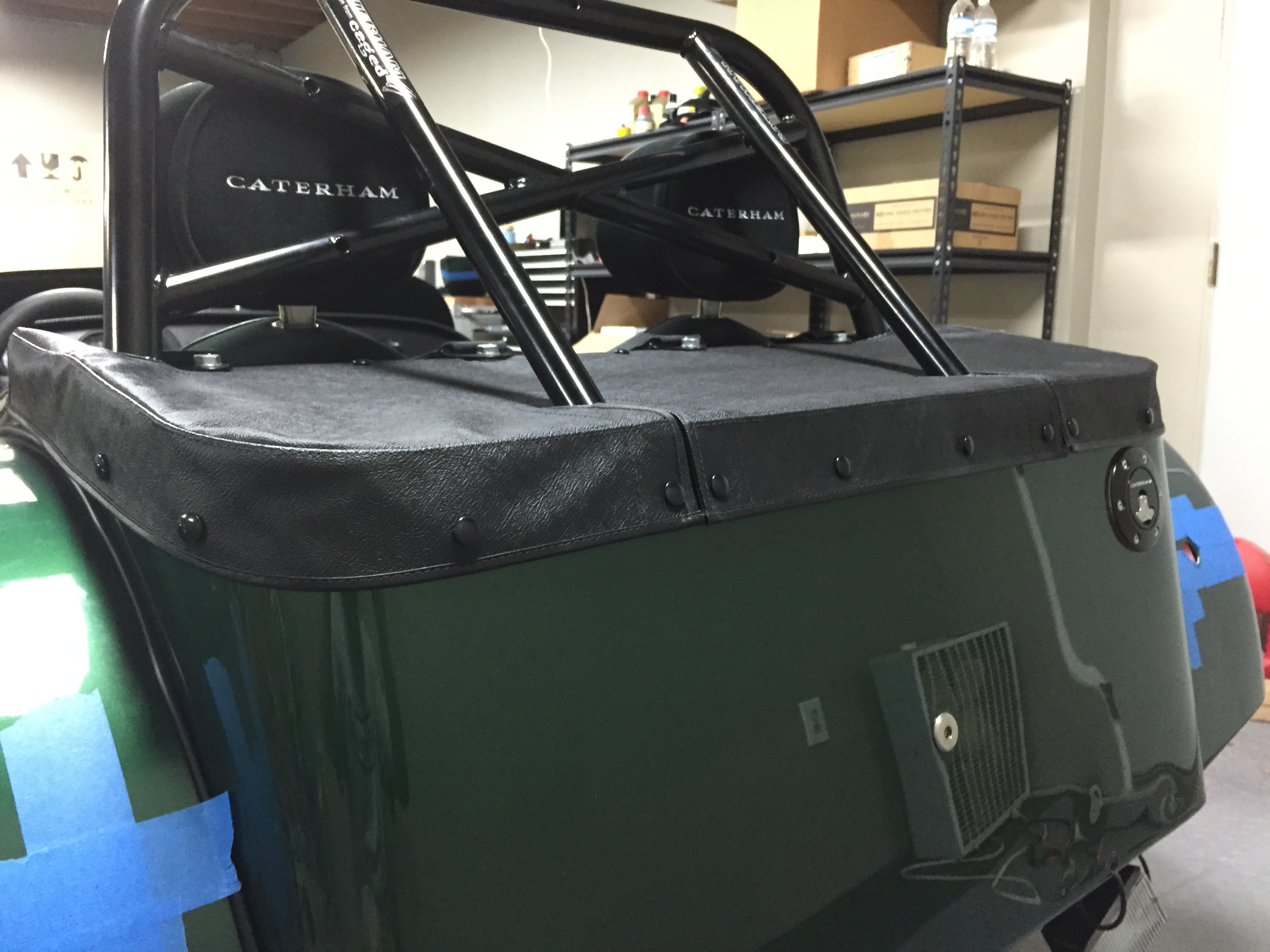 After that, Kim worked on getting the trim attached to the scuttle while I got all the stuff out to start bleeding the brakes. 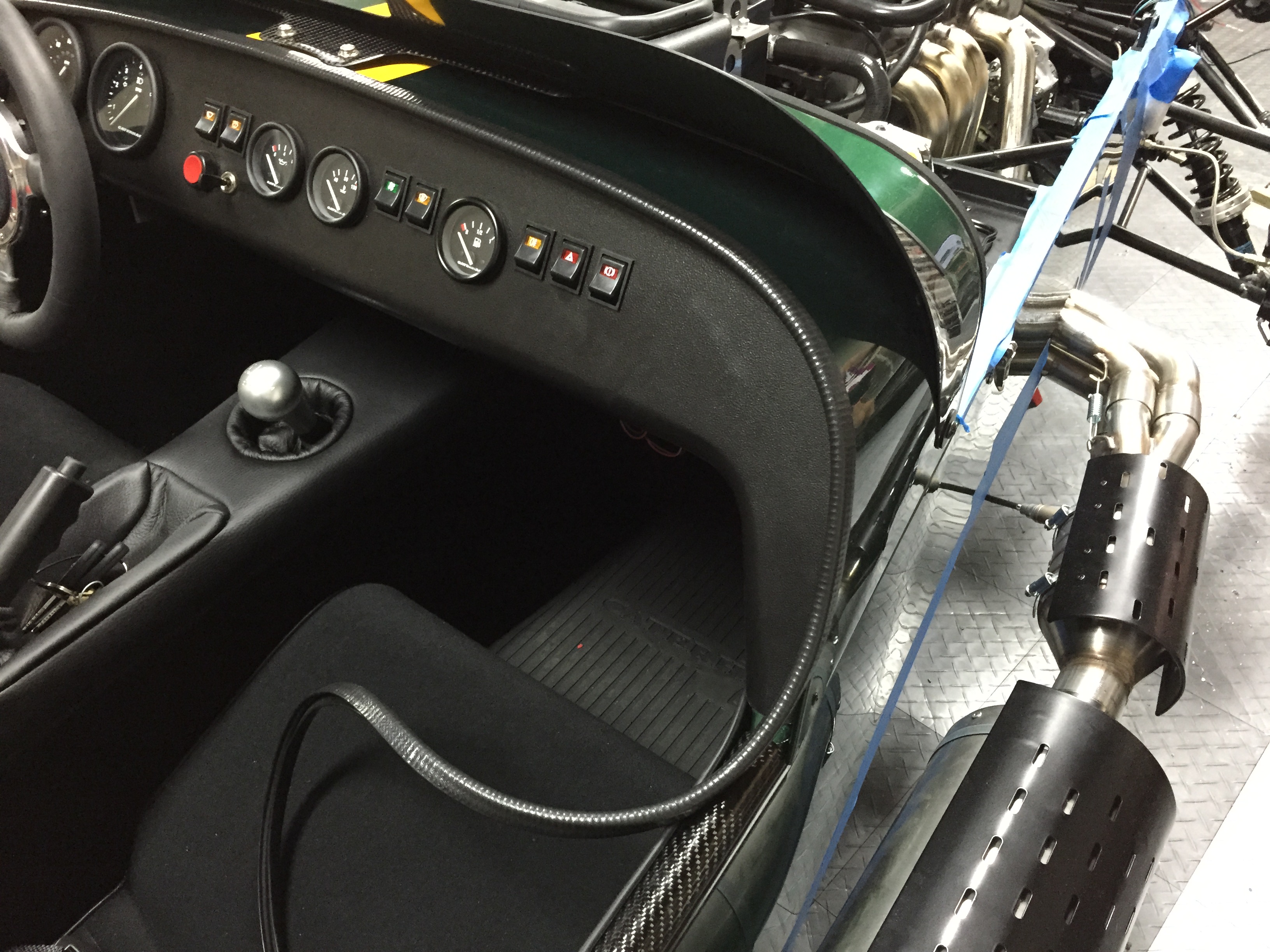 Brake bleeding went ok, the front right caliper had a huge amount of air in it, but the rest of the wheels were fine. The clutch had a couple small bubbles in it, but nothing major. The location of the clutch bleed valve perplexes me; why would you put it in such a miserable, horrible place?!?!

After that I put on the spare wheel carrier. I couldn’t find any nuts to fit from Caterham, but found some in my emergency stash that worked. The number plate light wire we ended up zip tying to the carrier. I’m sure it’s supposed to be run through the carrier or something but I didn’t feel like messing with it. Maybe another time…

Shortly thereafter, Adam arrived as if on queue and we started getting the rear brake lights on. Last weekend I’d cracked one of the rear fenders and knew when it got drilled out this week it was going to be equally as stubborn so wasn’t looking forward to it. I’m glad Adam volunteered to come over honestly; he would force me to just get on with it. I’ve been procrastinating all week dealing with the fiberglass and I know its keeping me from driving the car, but its the irrational fear of the gasp-the-car-isn’t-perfect that scares me. I guess I care a lot about this experience. Maybe more than others really know or I realize myself.

Anyway, now that we’ve waxed philosophical, on with the show! I’ve got no pictures of the lights, but will mention a few things. First, when we drilled out the right side holes in the rear fender the crack got worse. Way worse. But you can’t see it because the rubber light block is over it. I’m just going to block that out of my mind. We used the 1″ and 1 1/2″ self tapping screws which I’m not crazy about; bolts would be much more secure in my mind with less risk to the fiberglass. I also put some 1/4″ x 1″ rubber washers under the screw heads to cushion the fiberglass.

Another tip, when drilling fiberglass start with a 1/8″ bit then go successively larger til you hit the right size. I wish I had known that before I started drilling the fiberglass. Like I told Kim though… now I know for the next car I build. 🙂 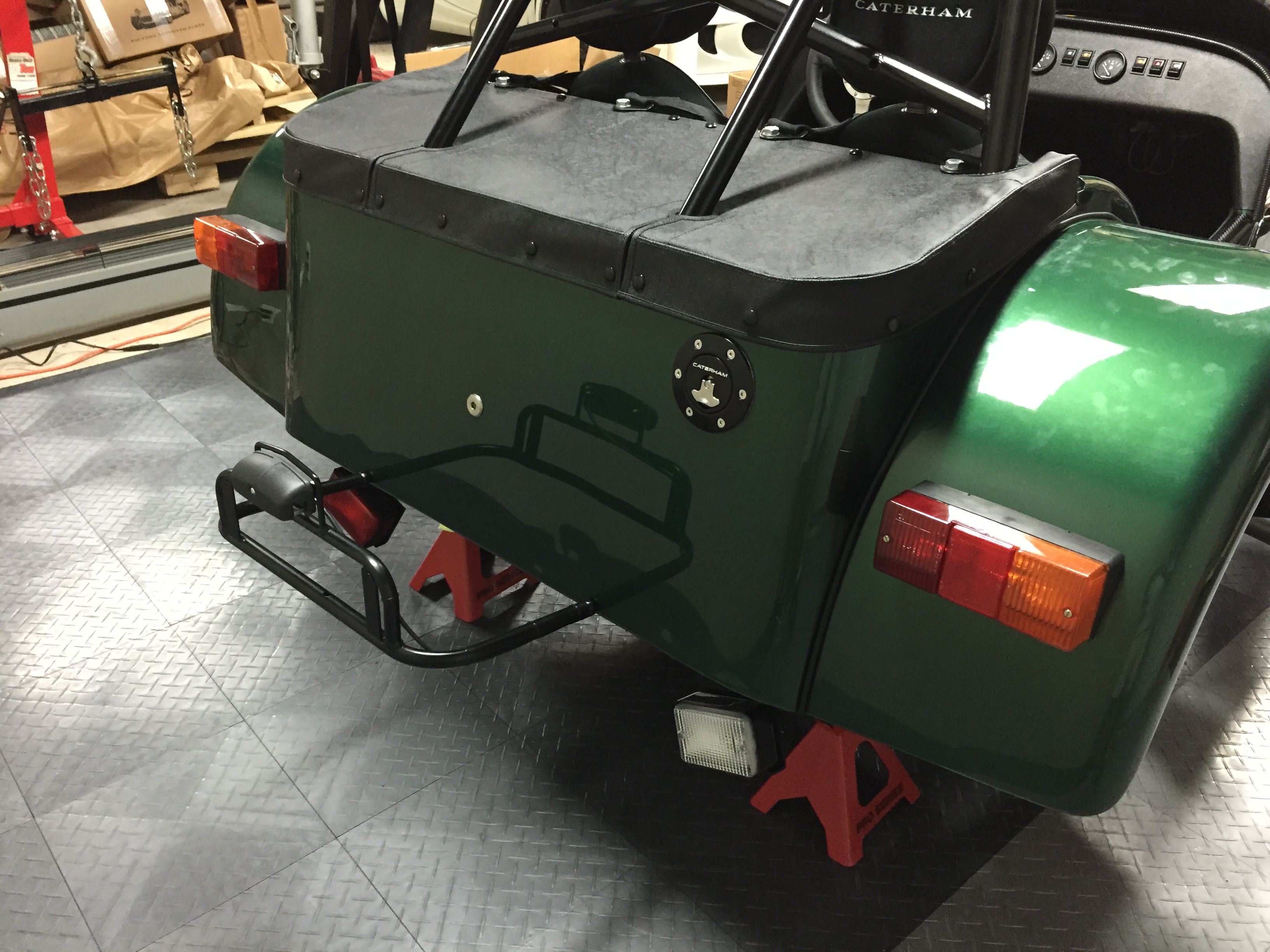 After the rear lights were on, Adam and I drilled out the last front wing stay and attached the wings to the stays. I then went upstairs and retrieved the nose cone and the bonnet while Adam trimmed out the battery post covers to fit the battery leads. 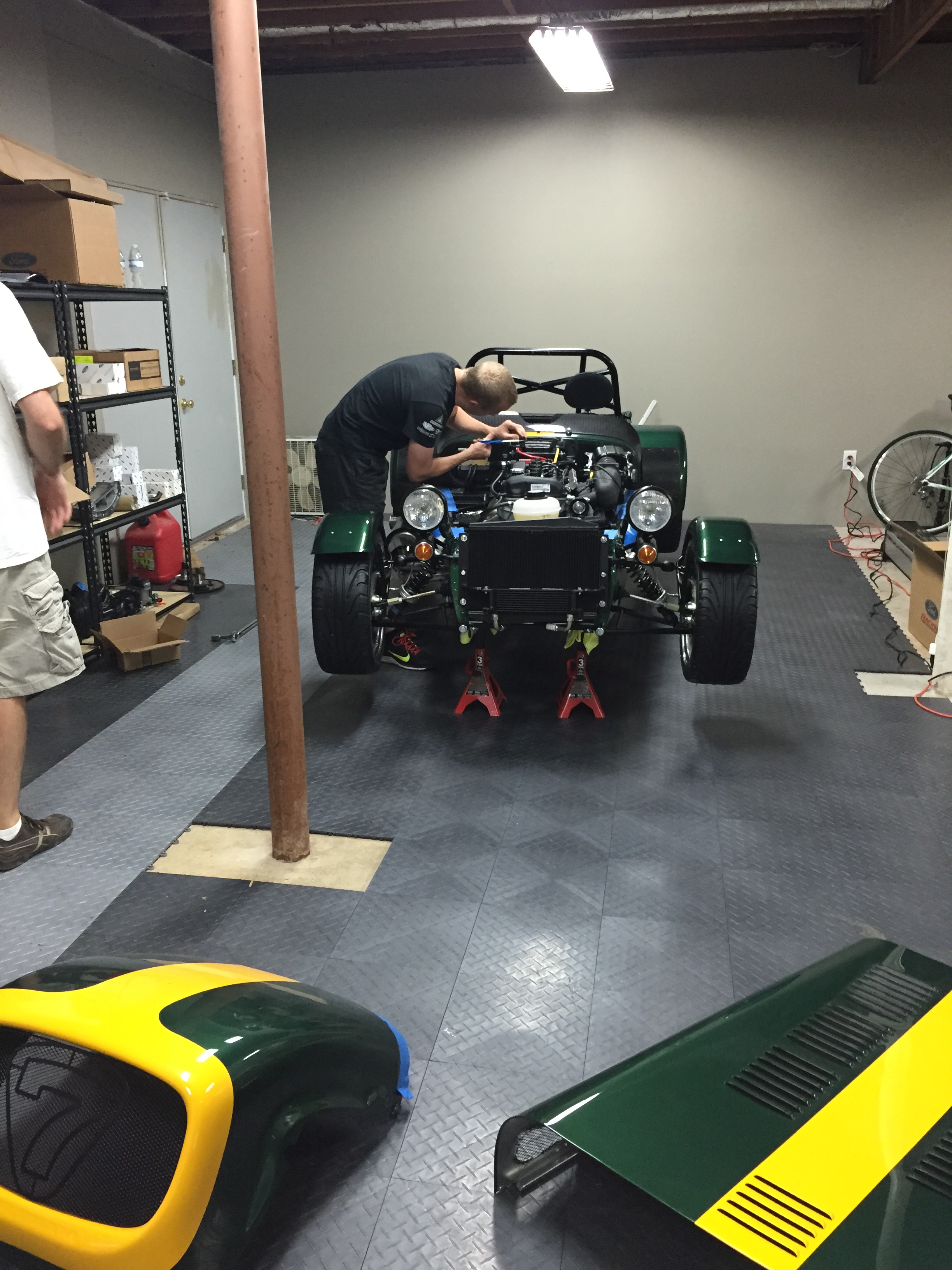 Once the bonnet was on with the nose cone… I just kind of stood back. Like… holy shit. This was the first time I’ve seen it with the bonnet, nose, and wheels on since I ordered it … almost 2 years ago. Let that sink in for a minute. Now I understand why people get all excited when their kid is born; it’s like really long delayed gratification. 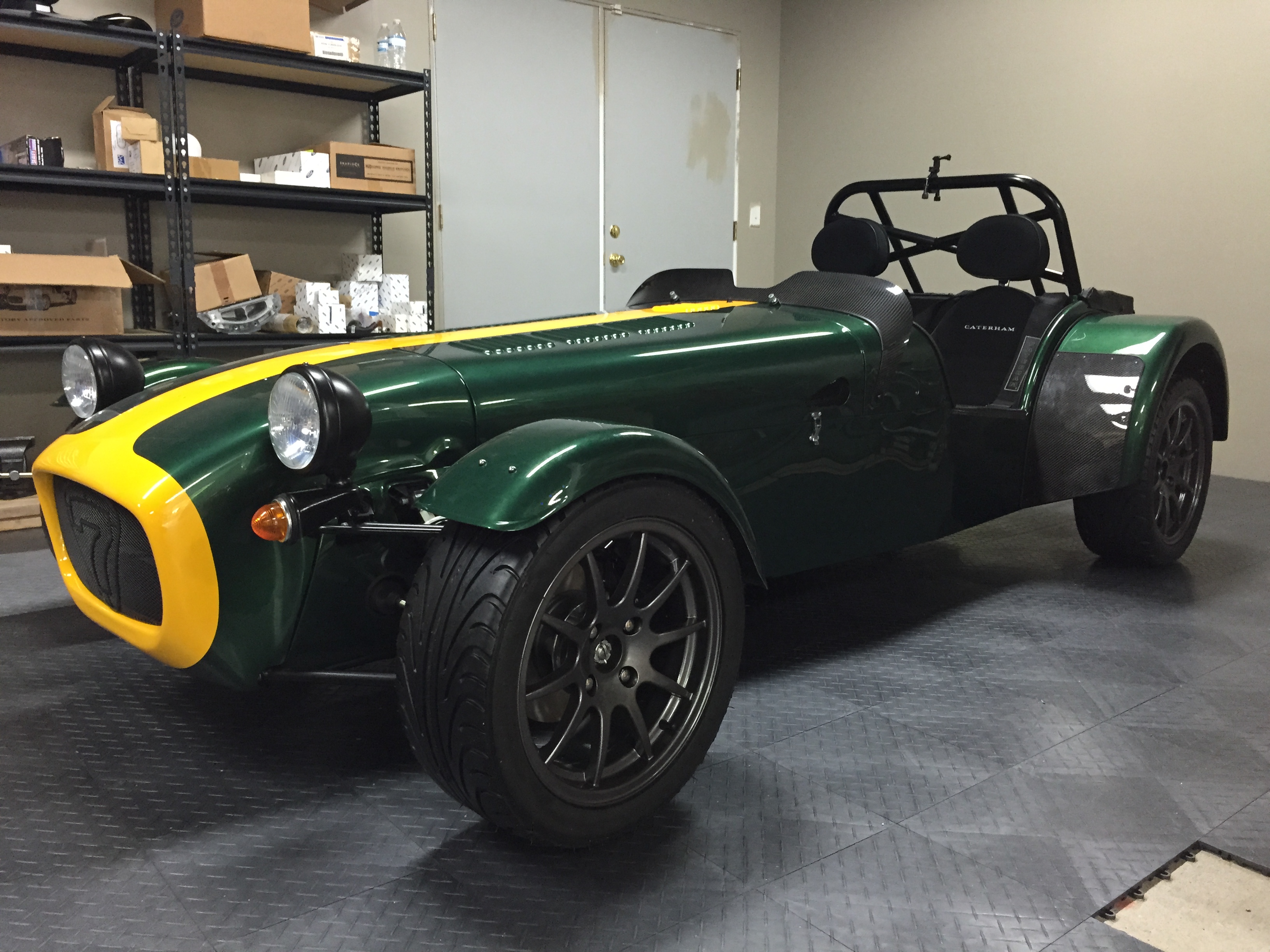 With the pictures out of the way, it was time to wheel it out of the garage. Before we did that though Kim wanted a picture of us in the car like we had at the beginning of the build process 9 months ago. 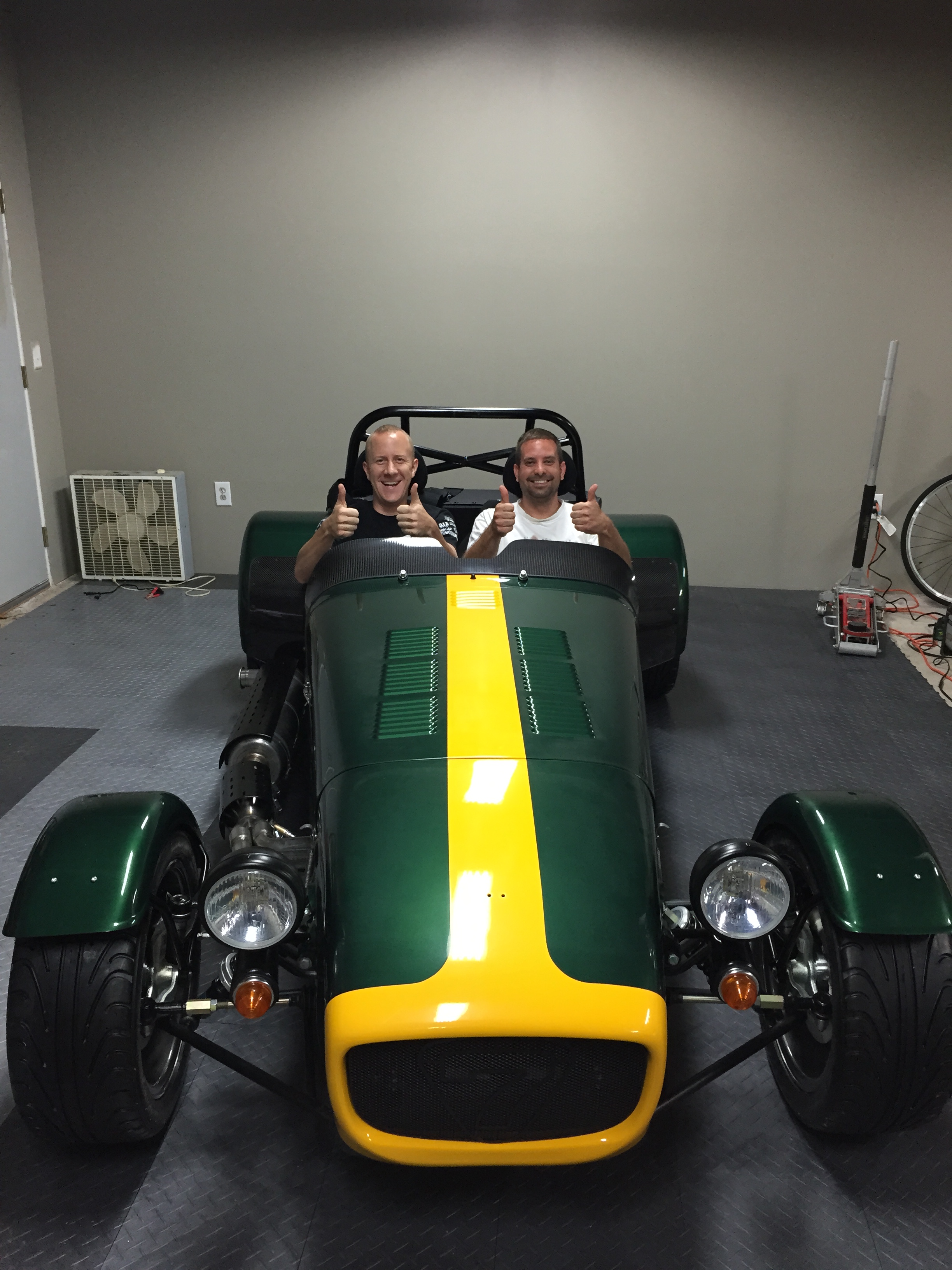 Adam and I pushed it out, navigating between the garage ceiling support poles, and then got it out into the sunlight. Holy crap does the green look awesome!! Bear in mind the car has never seen sunlight having gone from a factory, to a crate, to a garage… 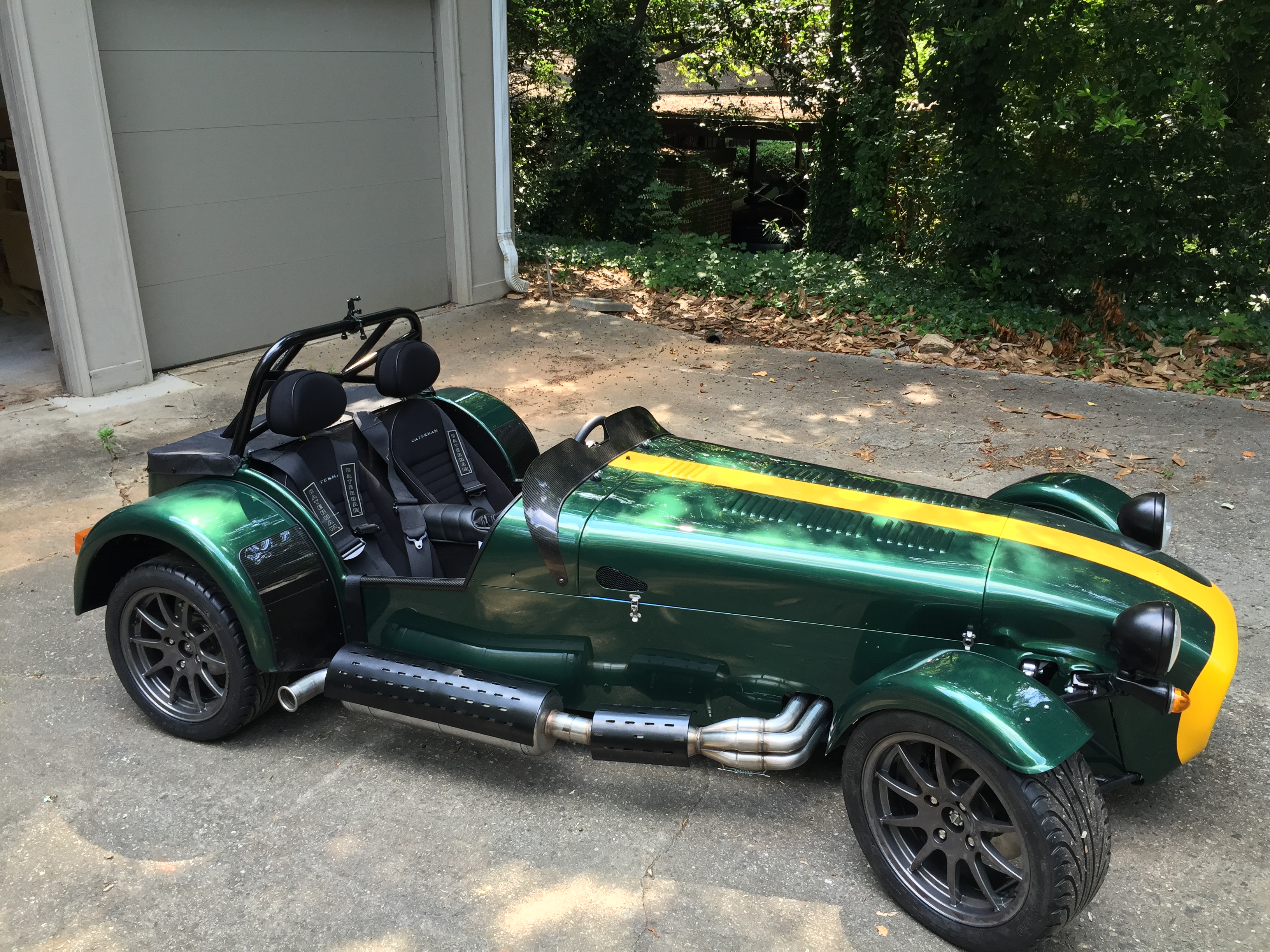 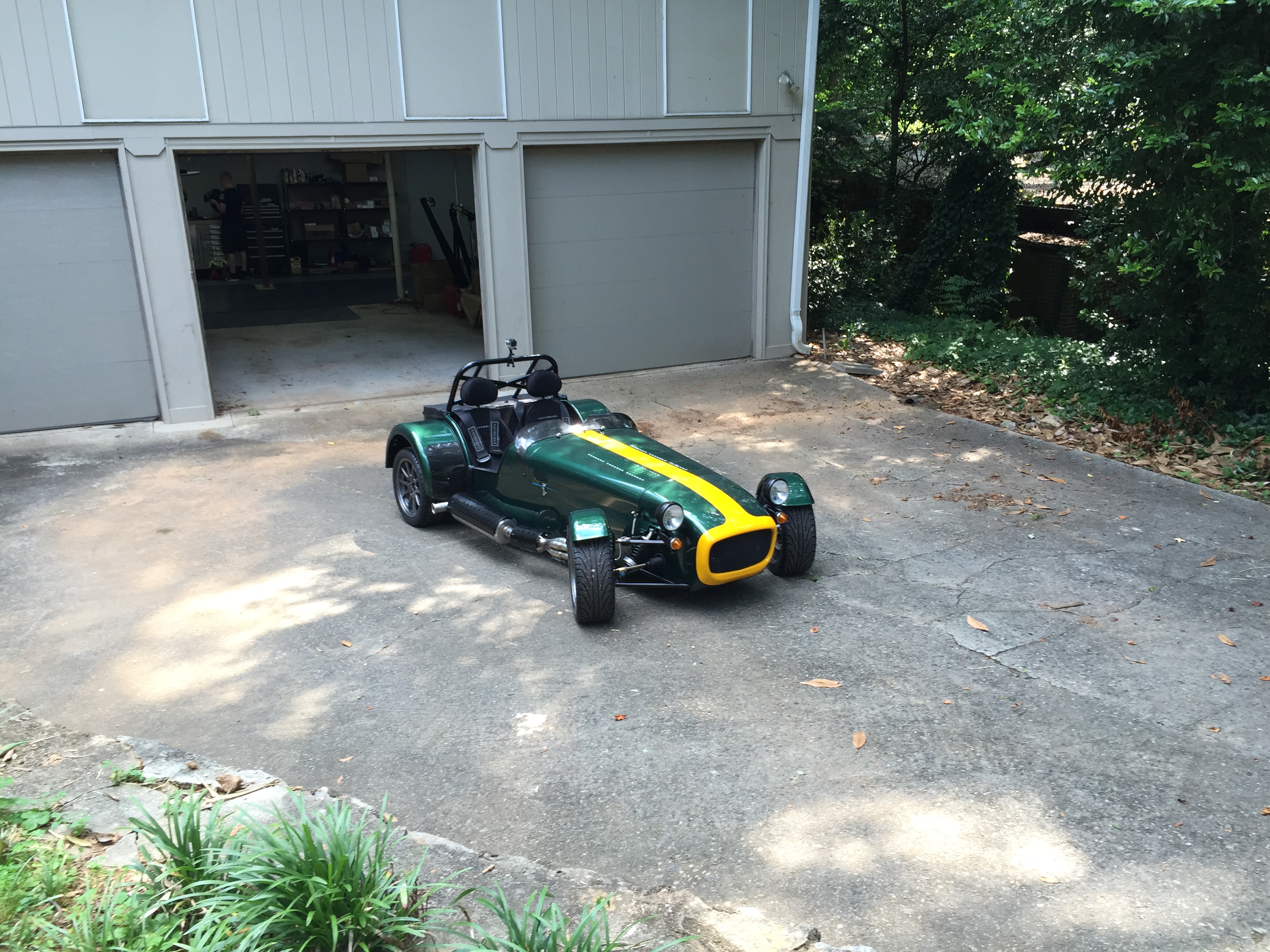 That’s a real nice GoPro… too bad I forgot to hit record before we drove away. Doh! 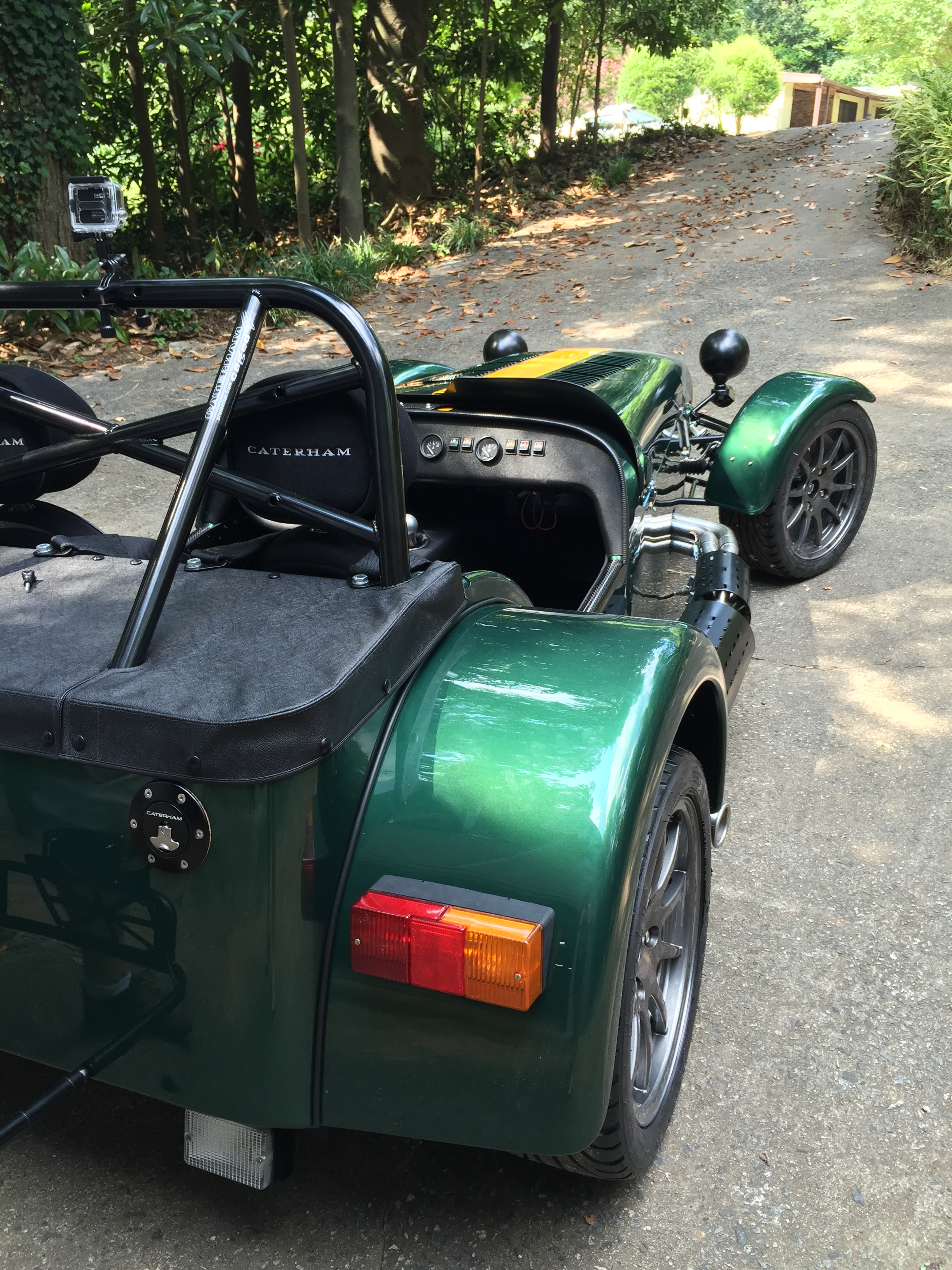 Then enter the two spacemen… 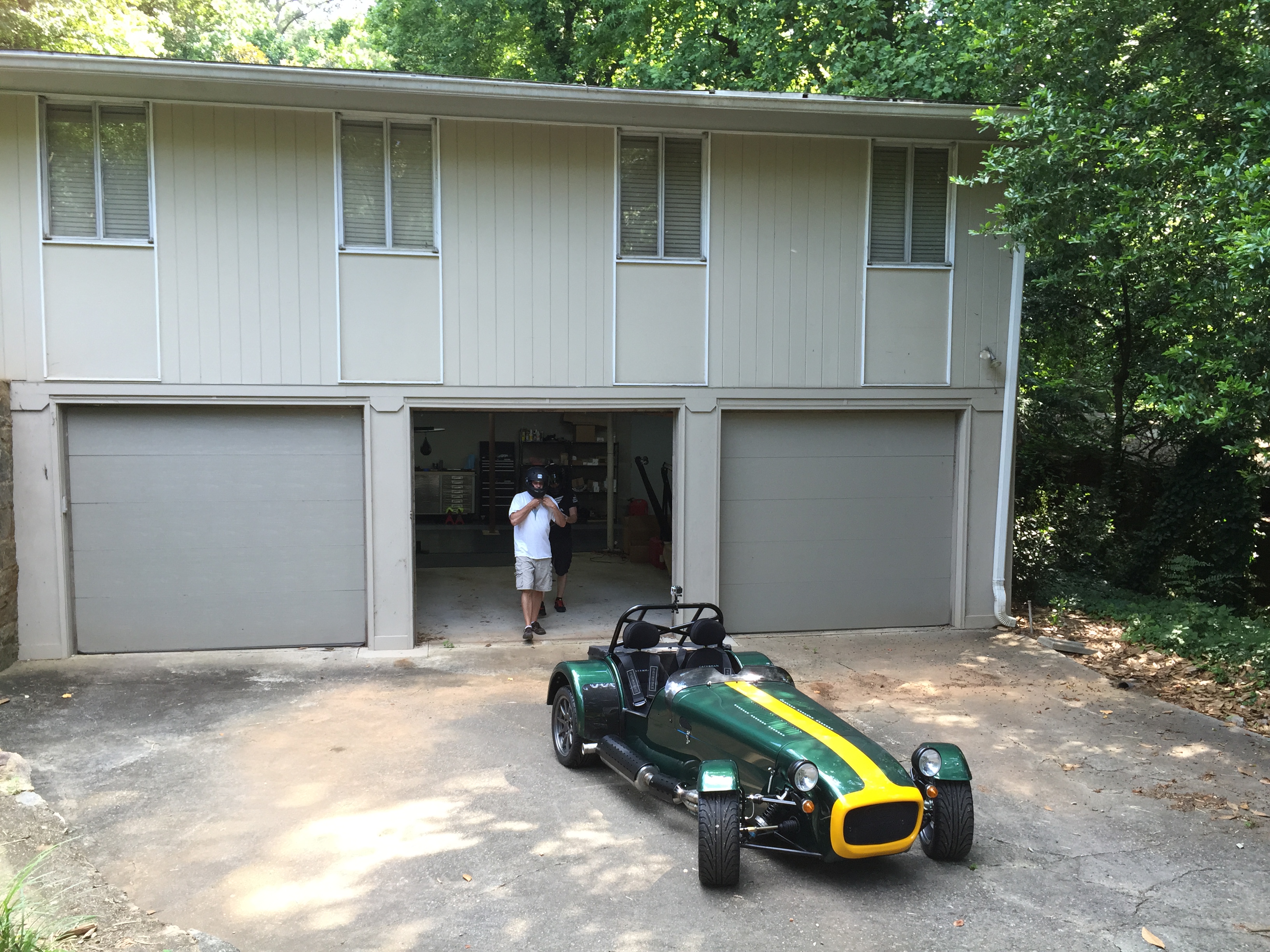 Kim then took a bunch of videos and pictures of me stalling out in the driveway. The clutch feels WAY too loose and could barely feel the brake and clutch through my shoes. The car started just fine though and seemed to idle ok with just a little bit of hunting. Will have to up the idle a tad bit more. After getting it into gear, I realized I was in third…hence the stalling. When I got it into first away we went!! The brakes are a tad mushy and I couldn’t really feel the pedal all that great, but Adam and I made it down the street and back.

After we got back to the house, we turned it around and I took Kim for a quick trip down the street. While her and I were out I realized the temp gauge had climbed into the red – time to get back and shut her down! After a quick trip back to the house of about 500 yards I pulled down into the garage and shut it off. The coolant system must have burped itself – there was no coolant left in the expansion tank! After letting the car cool itself down we gave it the once over and found an oil leak coming from the expansion plate for the oil modine and the obvious cooling problem. 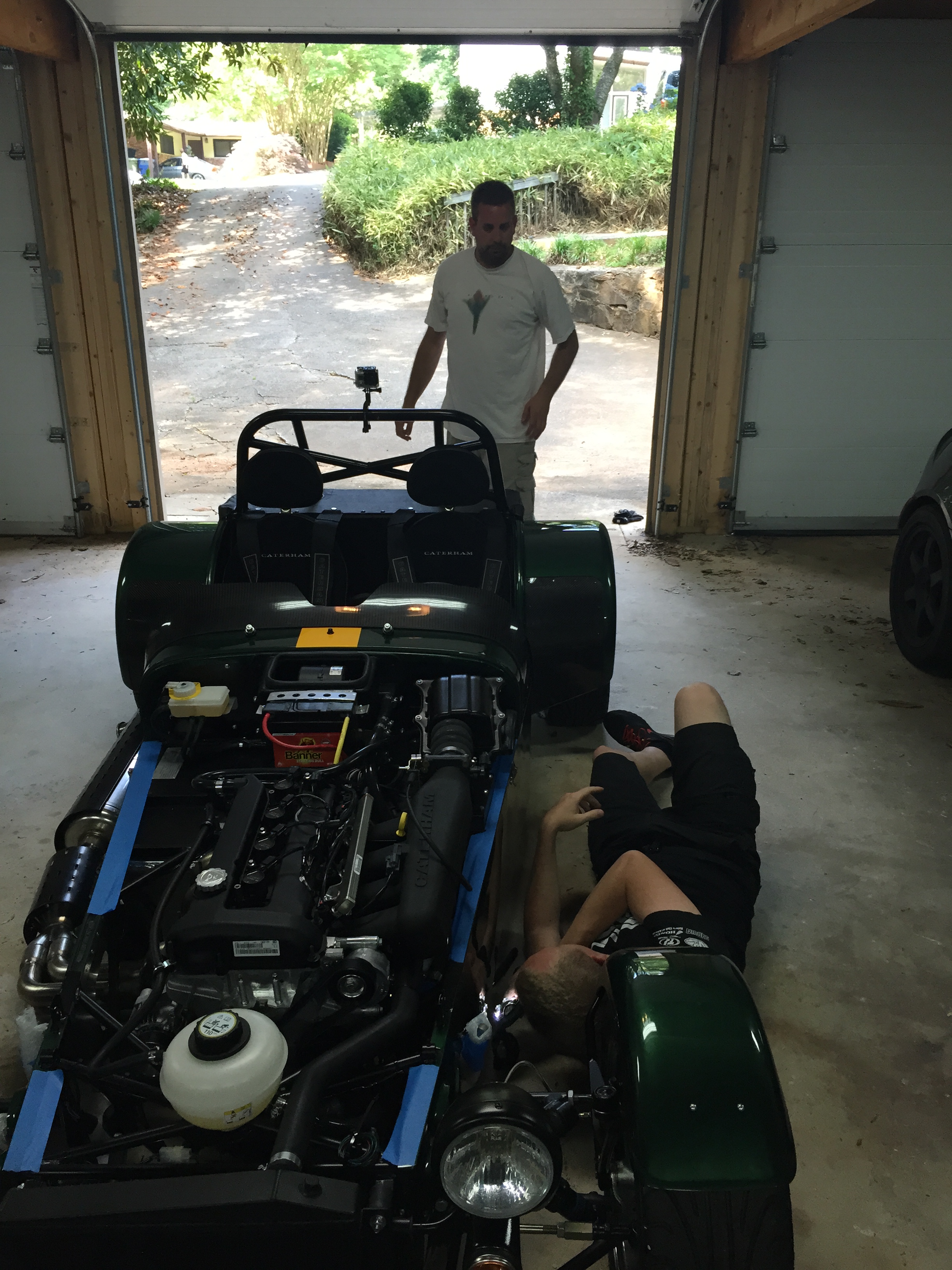 We topped it up with coolant and then I restarted it for a bit and watched the coolant level. I took another half expansion tank of coolant before it stayed level. I’m right at 2 bottles of coolant, about 6 liters if I remember correctly, and that is what others before me have added so think I’m close to getting all the air out. The clutch and brake feel I’ll have to figure out later as well; and the oil leak obviously.

So today was a great day – I actually drove a car I built!!! – and boy does that sound weird. And of course today is the 7th day of the month; unplanned but fitting.