Today at noon we planned to start the engine for the first time. Going into the morning I was pretty hopeful things would go ok; fluids were full, no leaks after I tightened down the coolant return line last night. The day started early, at 7am, for a breakfast run to Einstein’s Bagels and then to Home Depot for M8 cap head bolts to attach the parking and reverse lights. Rather than attach the lights directly to the aluminum, Randy had provided some metal brackets to hold the lights under the rear end using some attachment points on the chassis already.

While waiting for Bob, Adam, Heather, Venice, and Keith to arrive, I started out getting things ready for the day. I knew there were a few miscellaneous tasks to get done first so drew up a quick punch list of those and started tackling them. When Bob arrived, he and I set to the list together.

First up, condense the pile of boxes that were empty. Minus the weather gear, I’ve got one box left. The garage suddenly looks empty 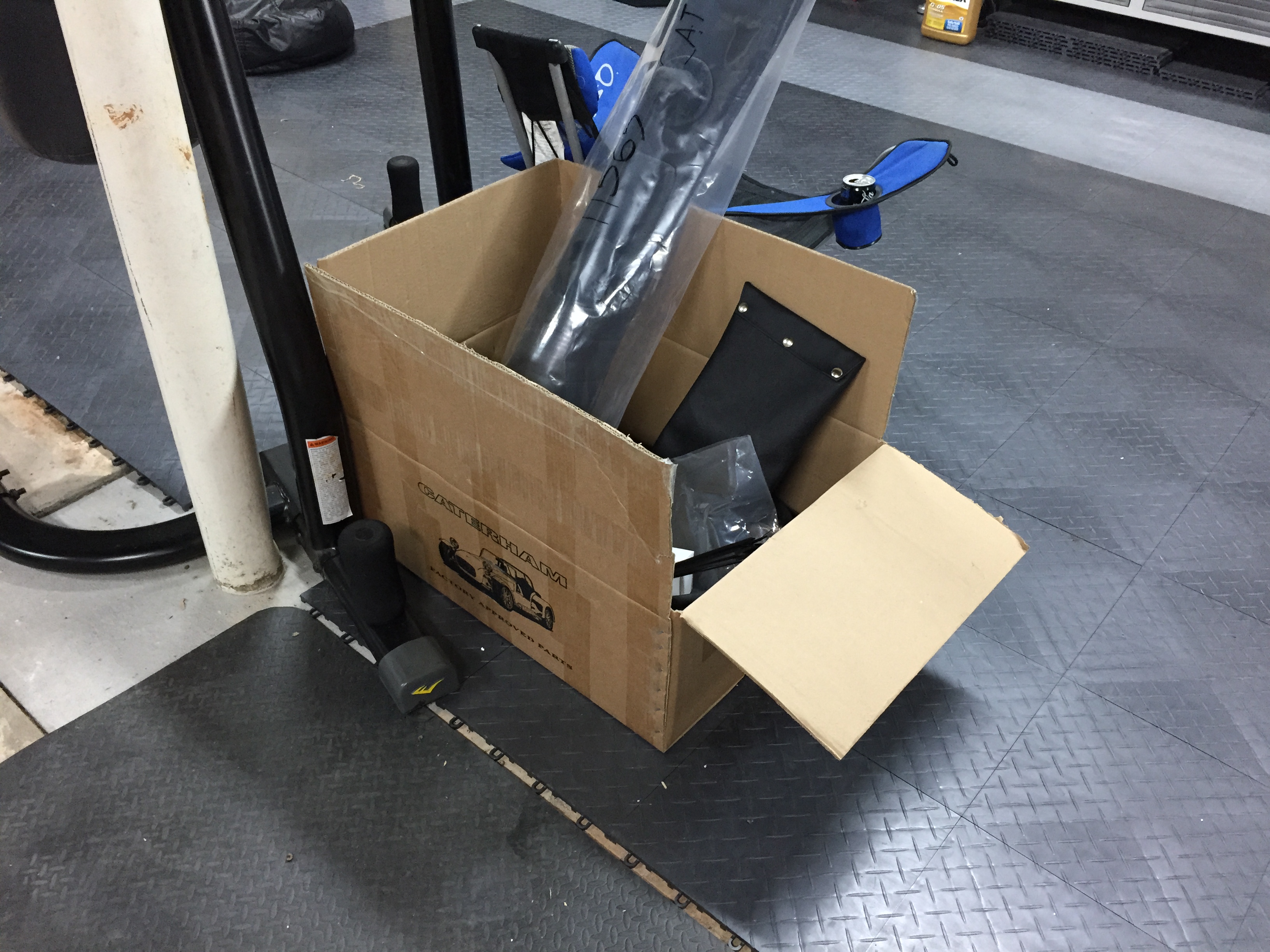 Second up was to get the power plugs out of the way so spooled those up and zip tied under the dash. Also needed to get the washer fluid line attached to the nozel and zip tied to the wiring harness. 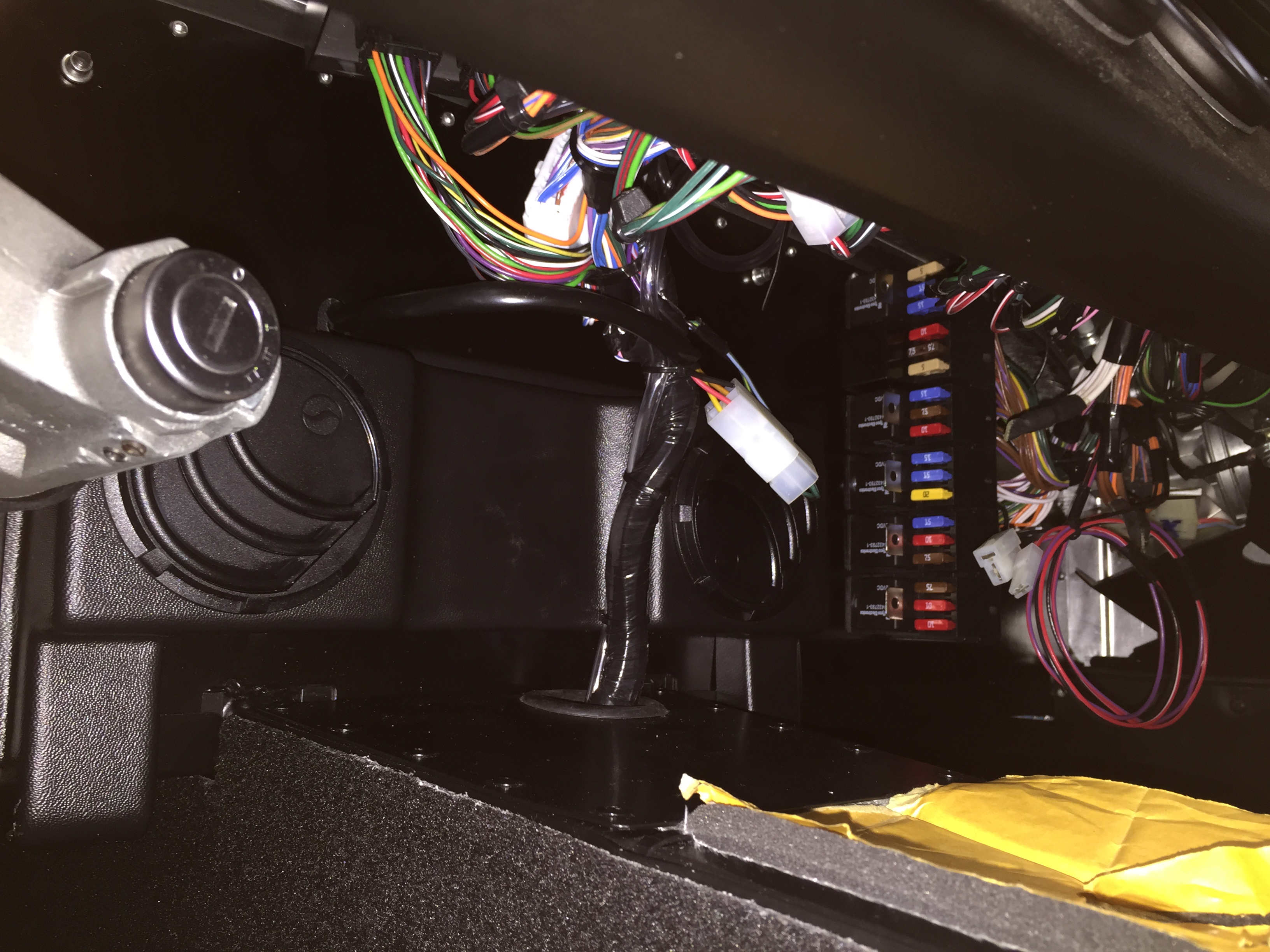 While I worked on that, Kim started lowering the tire pressure to 18 psi based on the manual specs (after I showed her how a pressure gauge worked).

Bob and I then got the center console into place. Hindsight being 20/20, I should have put the center console in before the seats because we couldn’t get it to fit sliding down into position and get the hand brake into the gaiter at the same time. After several missed attempts we finally decided to pull a seat back out by undoing the 6 allen head bolts. With the driver’s seat out we got it onto the hand brake then rotated it into position. It was a tight fit under the dash but put a microfiber towel between the dash and the center console so nothing got scratched. A little fiddling and then it got into place easily enough. The carpet in the passenger side front didn’t want to sit quite right so got some plastic interior trim tools out and got the carpet tucked back underneath the center console. Seat was then dropped back in, allen heads tightened to 14nm, attached the shift knob, tightened the grub screw, and snapped a pic. Interior done… sorta. The knob is for a 5 speed, I’ve got a 6 speed, hopefully Caterham can send a knob that matches… 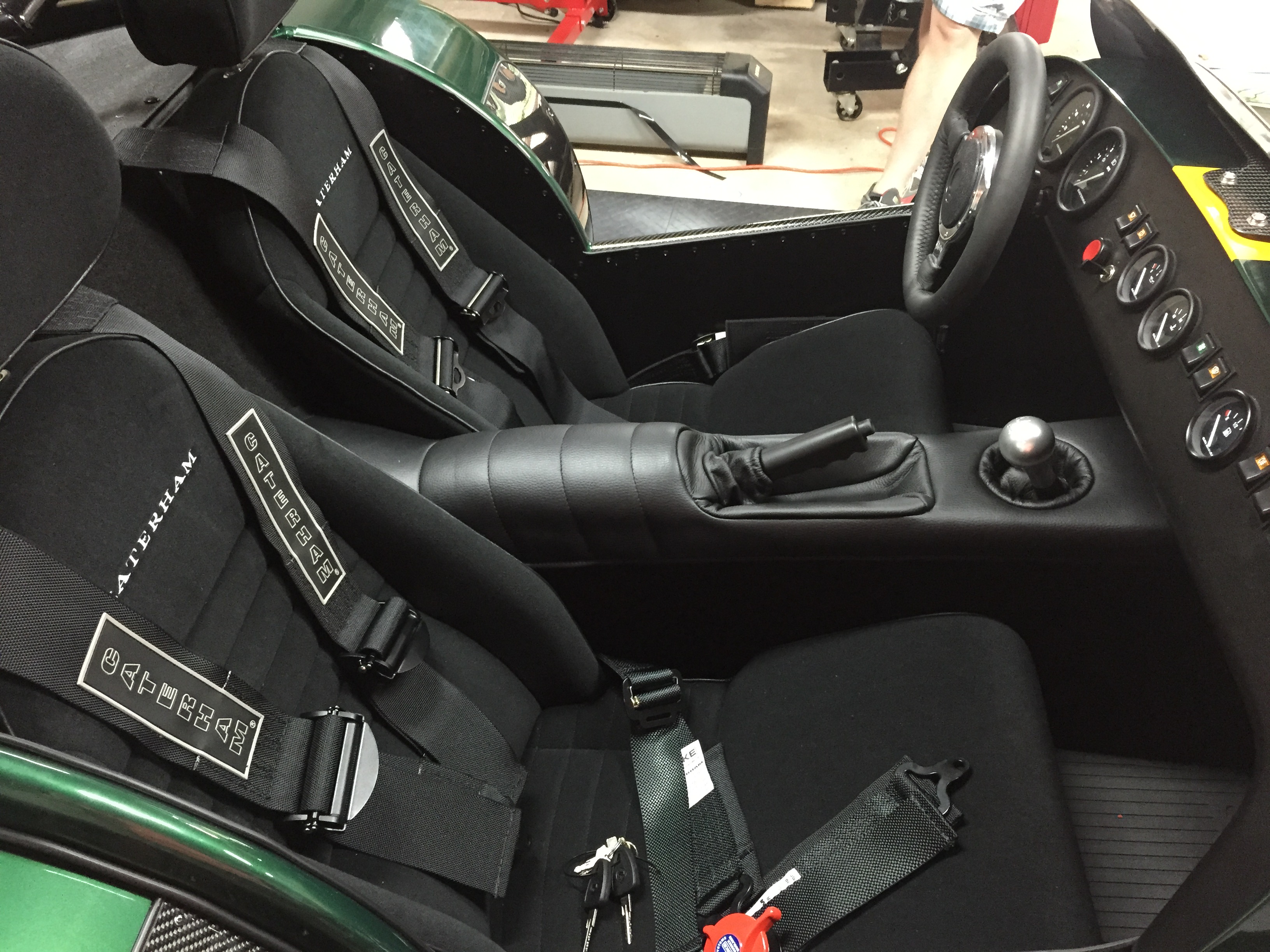 With the interior done, Bob and I attached the parking and reverse lights. Of course I needed M6 bolts instead of M8, but happened to have some in a spare bolts set I bought years ago from an auto parts store. Bolts on with spring and plain washers then washers under the plain nuts. I’ll swap out to nyloc nuts later although the springs should be fine for a while.

Adam, Heather, and Venice arrived a few minutes after we got that done. Heather and Venice took the time to start snapping pictures of the car while Adam set about helping us prep the car. While I worked on zip tying the ebrake cables and speedo wires down (will be replaced by P-clips later, I got the wrong size at Home Depot), Bob and Adam worked on getting the front suspension tightened and torqued. When I looked up the car looked about as ready as it was going to get. 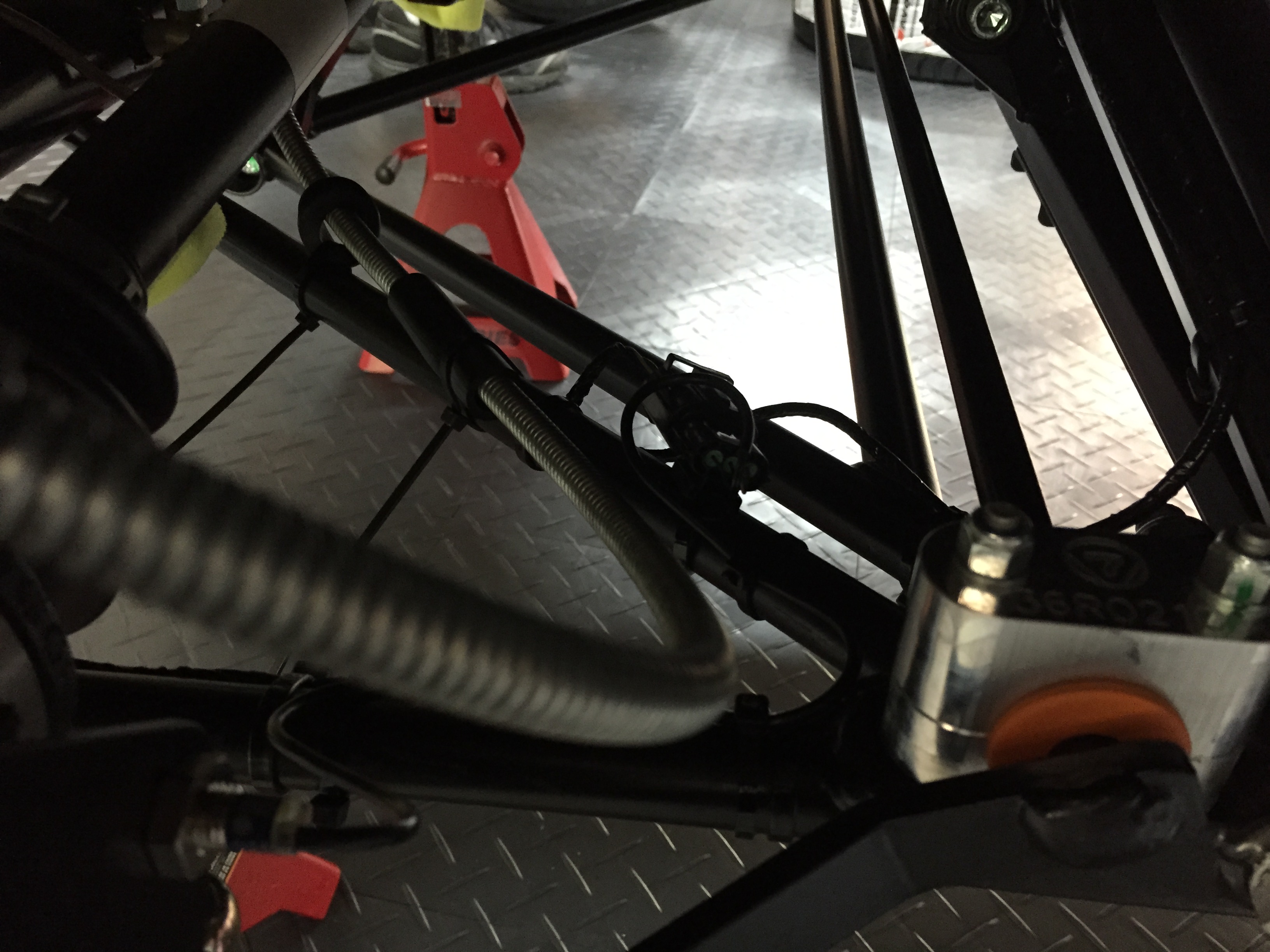 Time to put the tires on. Spacers on first, then hub nuts, torqued in to 74nm. 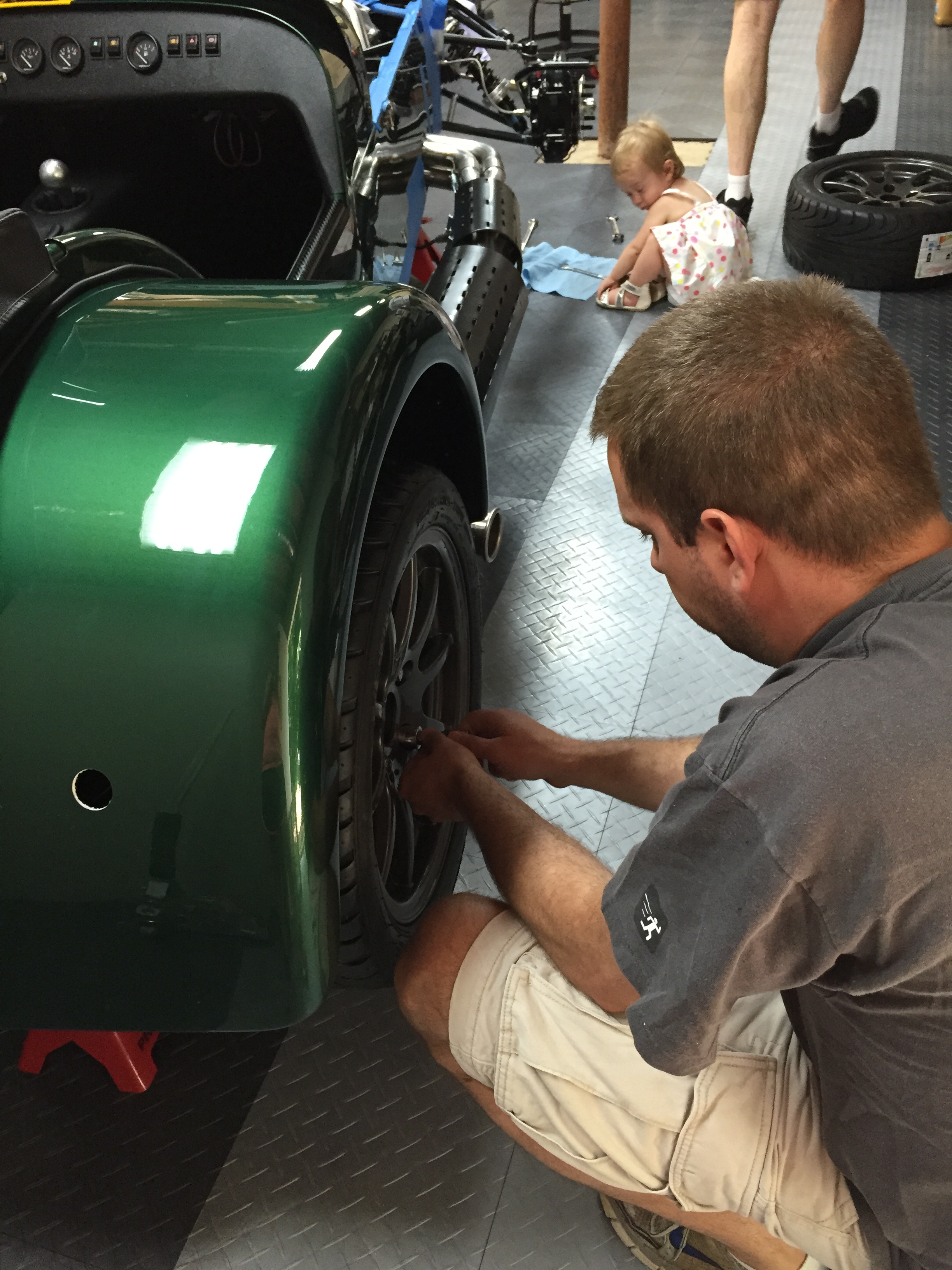 With the wheels on we set about lowering the car, rear end first, followed by the front. The jack with a hockey puck on it was too tall – when the wheels hit the ground the car was still resting on the jack! Doh! Out with some 2×4’s, jacked it up again, and then lowered onto the 2×4’s, and jack removed. Repeat the process for the front. 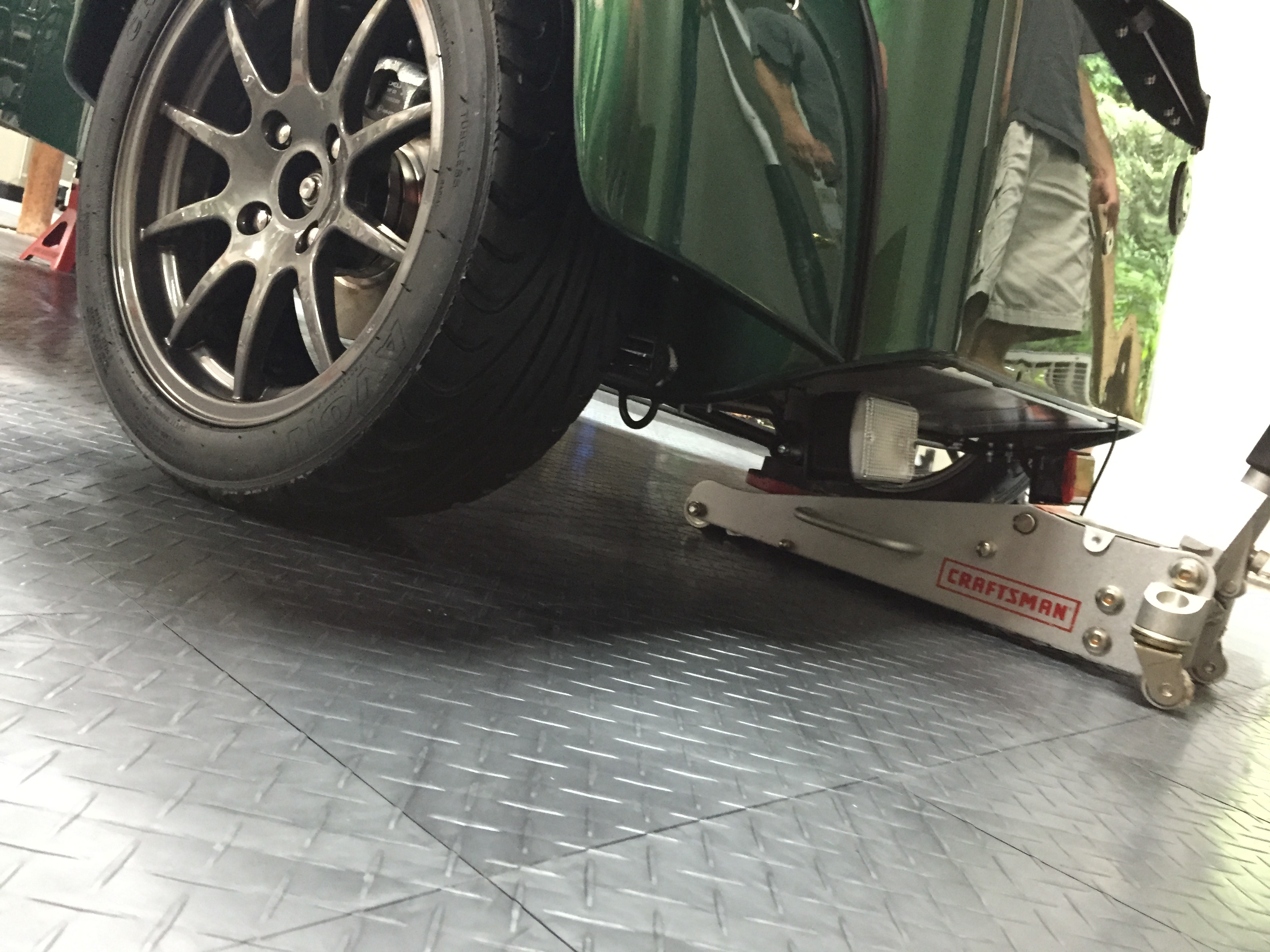 After that, Bob and I filled up the tank with a fresh 5 gallons of British Petroleum 91 octane. The tank read about half full once done which is correct, it’s a 9 gallon tank if I remember correctly. We also dropped in the battery (stock Banner 12v 30Ah) which I’d had charging on the tender for a couple days. 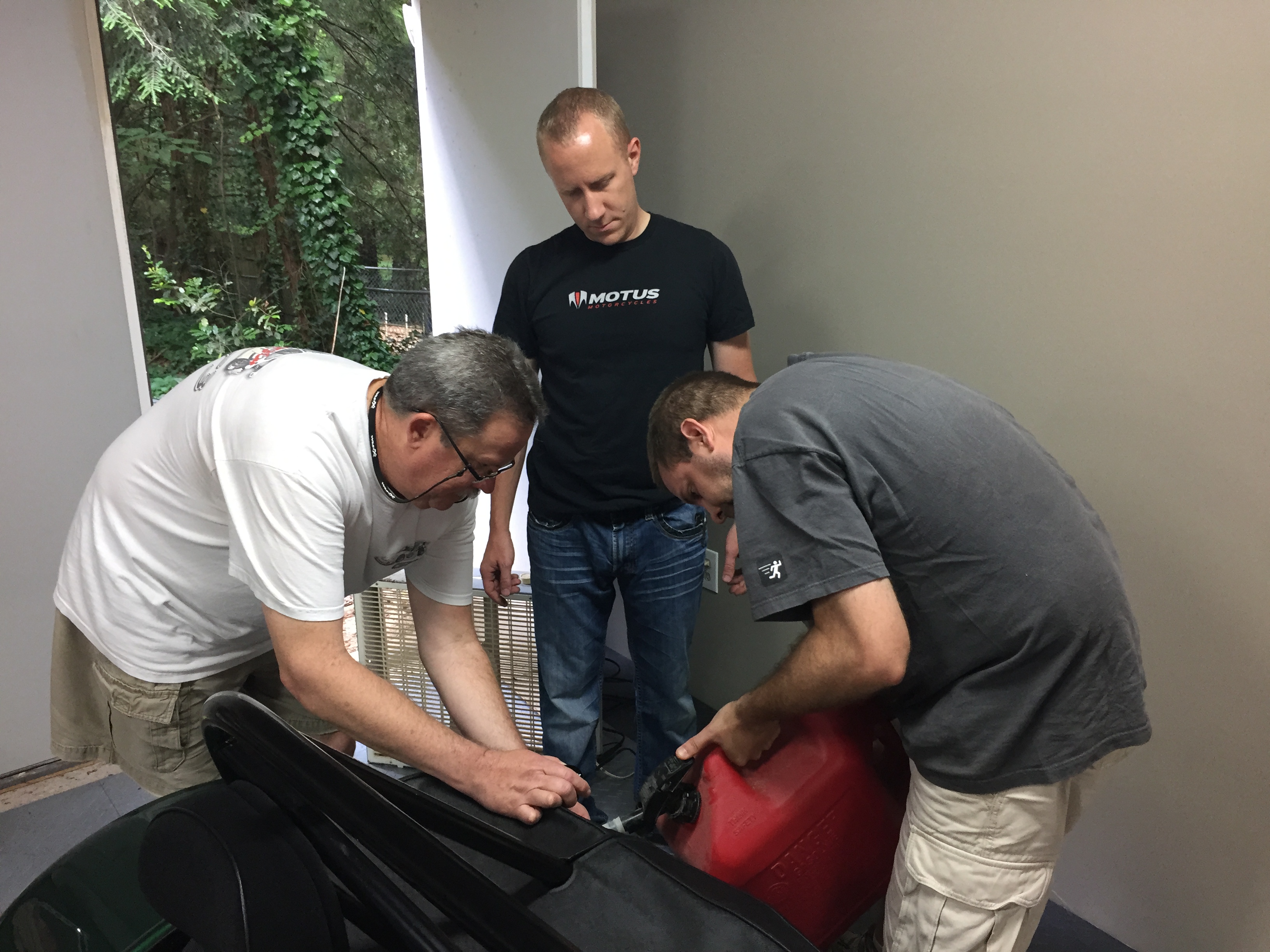 After that, it was into the car to start it up – moment of truth! 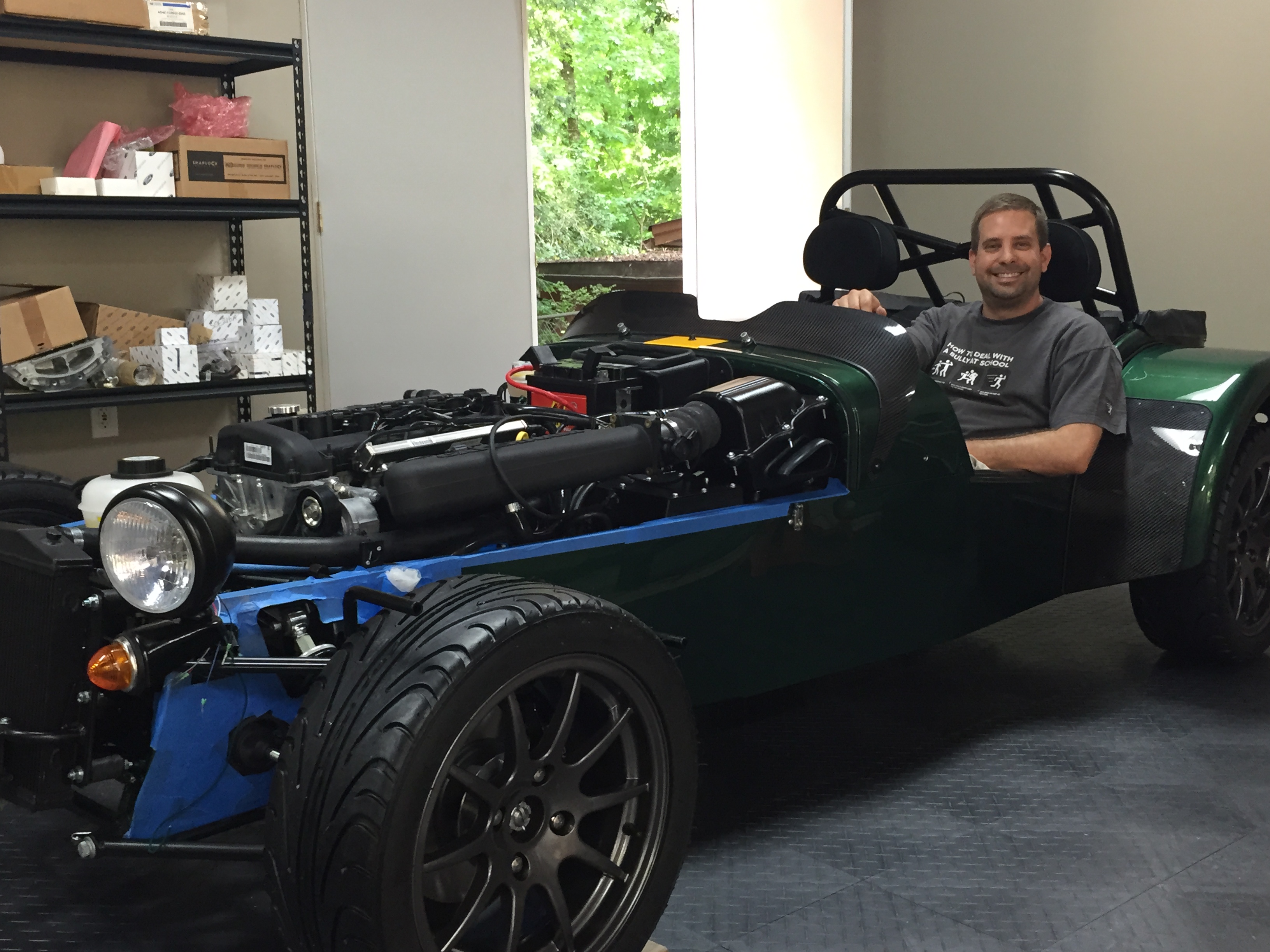 Following the manual, we disconnected the inertia switch, and turned it over for 30-40 seconds. We expected to see the oil pressure come up, but the needle didn’t budge. I could tell it was getting power since it moved from the ‘off’ rest position to zero, but wasn’t showing any pressure. The oil dipstick didn’t register any oil either so added another quart of oil; now up to 7 quarts added to an empty 2.0L Duratec engine with the stock Caterham oil pan, oil cooler, and lines (which sounds about right). Uh oh…

We tinkered with that for a bit, trying to figure out why that was the case, and after looking at the cam shafts with a flashlight through the oil cap and could tell oil was circulating around the engine. We also opened up the oil cooler line and could see oil had made it into the cooler so it was definitely circulating. So it wasn’t the engine; must be the pressure sensor or a bad gauge. After a round table we figured we’d start it up and see what we could get. Inertia switch was then plugged in, key moved to position II, and the little red start button pressed…

The engine stumbled but felt like it wanted to start. Try again, same result. Tried a third time, same result. On the fourth attempt I gave it a little blip on the throttle and it started!

The oil pressure still read zero, but then would jump to 8 bar, then drop to zero, then back to 8. The engine sounded sick – just didn’t want to run well – so I turned it off. Adam did a quick heat test on the exhaust primaries and could tell only 2 had heat on them – 2 were cold. So we’re running on 2 cylinders rather than all 4. Hmm…

At that point we all went to lunch, La Parilla, and round tabled the issues we were facing.

1. The 2 cylinders problem we deduced was either related to fuel, spark, or air. We could smell the fuel coming off the exhaust and around the engine, and hear the fuel pump prime, so that wasn’t it probably. Next up was air – we knew we were getting air because 2 of the 4 cylinders were running ok and they all feed from the same inlet. That leaves spark, or lack thereof, so we figured we’d start there first when we got home. Out with the wiring diagram!

2. Oil pressure was getting a signal, just not a great one apparently. Could be a bad sensor, bad gauge, or not a firm connection. I was leaning towards a bad connection since the sensor and gauge were both new from Ford / Caterham.

3. There was a huge amount of negative pressure on the inlet side. So much so you could see the inlet manifold getting sucked inward like someone sucking in their cheeks. That seemed odd.

Once we got home, Adam, Bob, and Keith tinkered with the cylinder problem while I connected and disconnected the connection between the pressure sensor and the wiring loom. I also cut away some of the zip ties holding it in place to get at it. Once convinced it was firmly seated I flipped the key back over and VIOLA!! oil pressure read 2 bar! It works! Mystery solved.

About the same time, the guys solved the cylinder problem. Apparently the coil packs on cylinder 1 and 2 weren’t seated all the way and weren’t getting electricity to the plugs. They took them out, re-seated them with a good bit of downward force and used some pliers to stretch out the coils, and sure enough, all 4 fired on the next start. Mystery solved.

That left just the inlet pressure to figure out and why the engine wanted to stall so bad. On a whim, we took one of the rubber plugs off the inlet manifold (large hose barb near the throttle body) and the engine immediately ran better and seemed to be purring. Also, no more negative pressure build up. We then plugged it back in and then used our fingers to adjust the throttle body a bit to keep the butterfly open a tad more; engine ran great! The engine is now running… holy crap!

After the engine ran for a bit (10 min or so) we checked the oil pressure and it was set at 4 bar, exactly as expected. The engine had burned off the packing oil too. Temperature was at the 100 mark (assume it’s in C), which seems high, and didn’t see the fan running. Will have to investigate that a bit more and I’m sure the coolant needs to be bled too. The guys and I chatted about the idle setting so we added a washer and a nut under the stop; that’ll keep it where it needs to be until I can drill out the epoxy that covers the idle position screw.

Alternatively, I could run the oil breather back into the intake manifold rather than the airbox – the engine seemed to like the big port being uncovered. Along those lines, I sent an email to Simon and Mark about how their crankshaft breather lines are run. Mark (CSR175) has his run to the airbox and the intake inlets plugged, same as mine, while Simon is now running to an oil breather bottle, so things are a bit different. However, he also said his intake manifold ports are both open and had the stalling issues I did which is why they were unblocked, so I’m not crossing uncharted territory it appears. I checked Dave Fernalhone’s blog today – he had the same issues I did – so it appears the idle issues are universal in the US setup. In the EU, the two ports are used for a charcoal filter (large port) and the small one goes to an exhaust gas return (small port). Since they bypass the throttle body and manifold pressure sensor, I wonder if their airflow gets accounted for? Something to dig into a bit and come up with the best solution.

So it was an exciting day – the engine runs, have some things to address, but I’m very, very close to getting it out on the road.