I was eager to get some progress done since I had the day to myself. I wasn’t quite sure where to start, so just picked something, and that was to start on the door sills. I’ve been hesitant to do them since its one of those fiddly, time consuming tasks but at some point it needs to get done so might as well get it done now. First step was to push the door sills over the frame rails then drill through the pre-drilled holes in the frame and the cockpit aluminum. This went quickly, although I was sure to take my time and use slow drill speeds and light pressure – I didn’t want to push the drill through the edge of the chassis tube and out the side of the car! The one thing I noticed, as a tip for anyone else building, is you need to keep downward pressure on the door sill so it will sit properly – mine wanted to flex back up a few millimeters. I hated drilling into that carbon though – looked so nice! Once drilled out, I began running the rubber trim. This went pretty easily. I started in one corner, give it a little nudge with the drill to poke a hole, then inserted the rivet. What seemed to work best is to start in the top corner near the boot and fit 1 rivet, then move down a couple holes, fit the next rivet, and so on. That way I was able to align the trim, the aluminum cockpit panel, and the rivet holes without causing the end of the trim to flap about. It takes time, just requires some patience. You also get very good at riveting – I did all the rivets with a hand pop riveter and got quite good at it by the end. I’m not sure if that’s a marketable skill though… 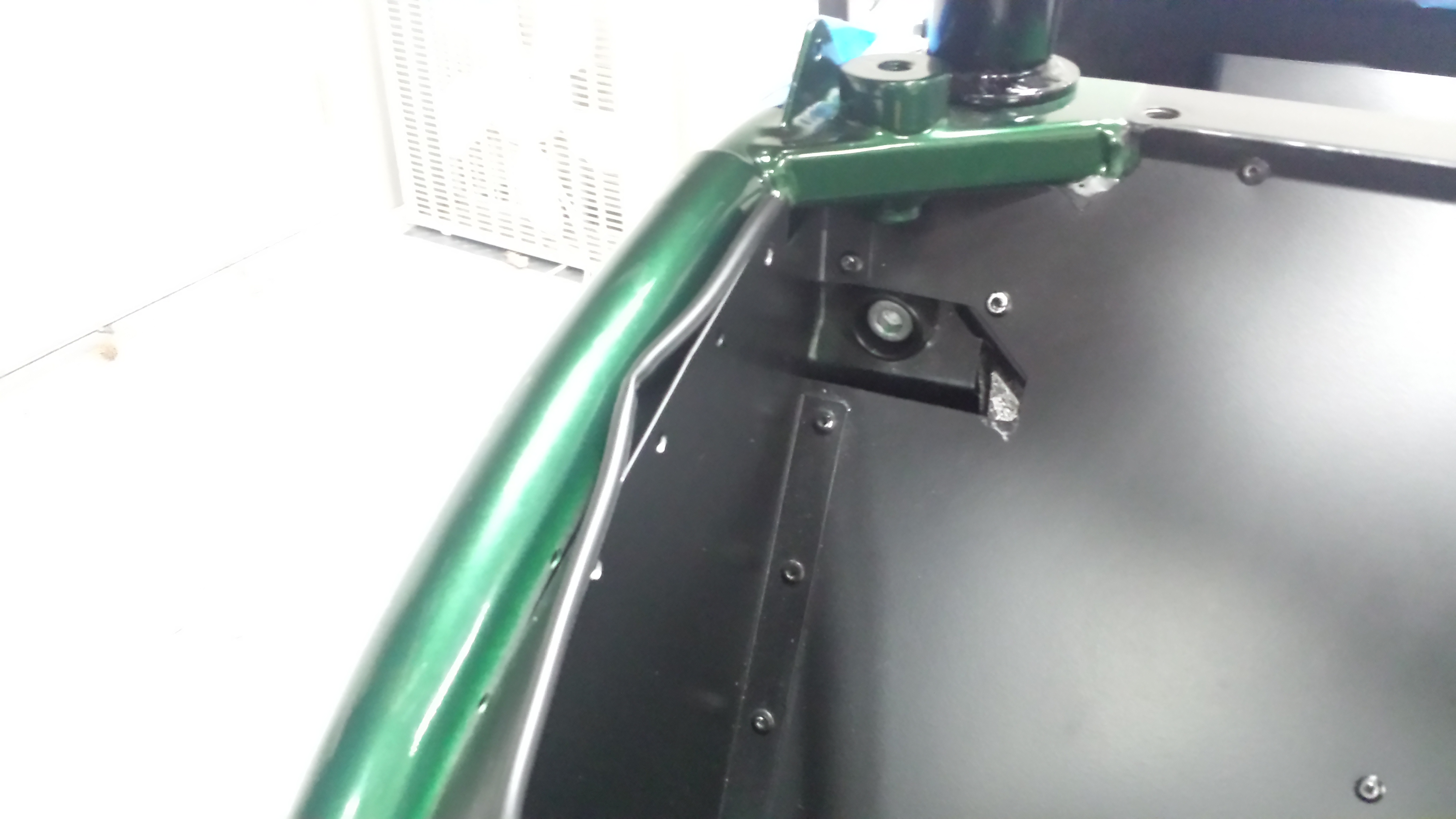 For the door sills, I found it easier to start in the middle then work my way outward a few rivets at a time. 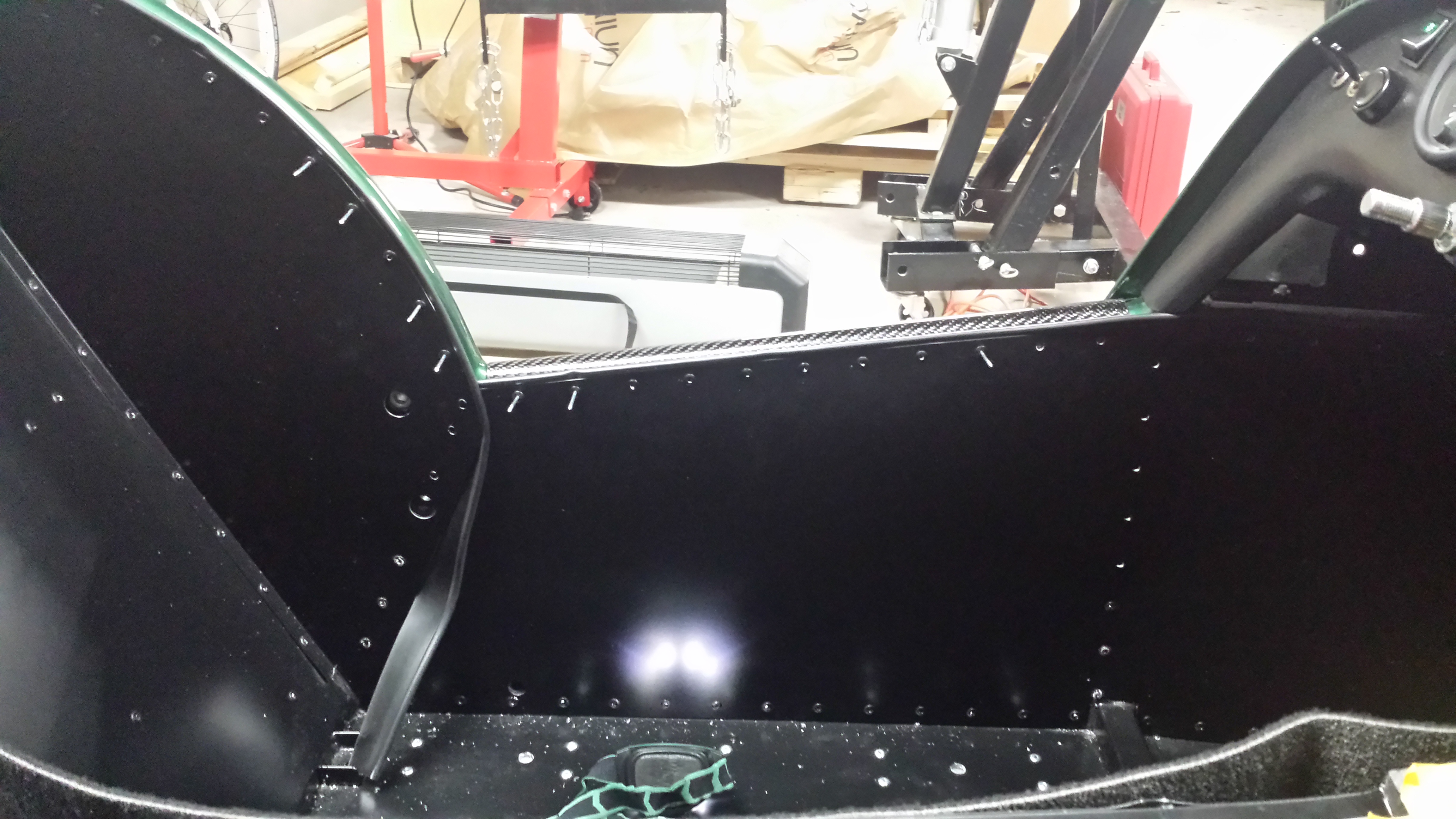 One other note, I wasn’t really happy with the fitment at the corners. According to the manual the trim piping is supposed to go down past the 90 degree junction and continue to the edge of the aluminum panel, almost to where the seat edge would be. I didn’t like the gap that created in the corner… … so instead trimmed it just a bit past the corner and tucked it into the junction. I think the look is much better than stock and it turned out nicely. 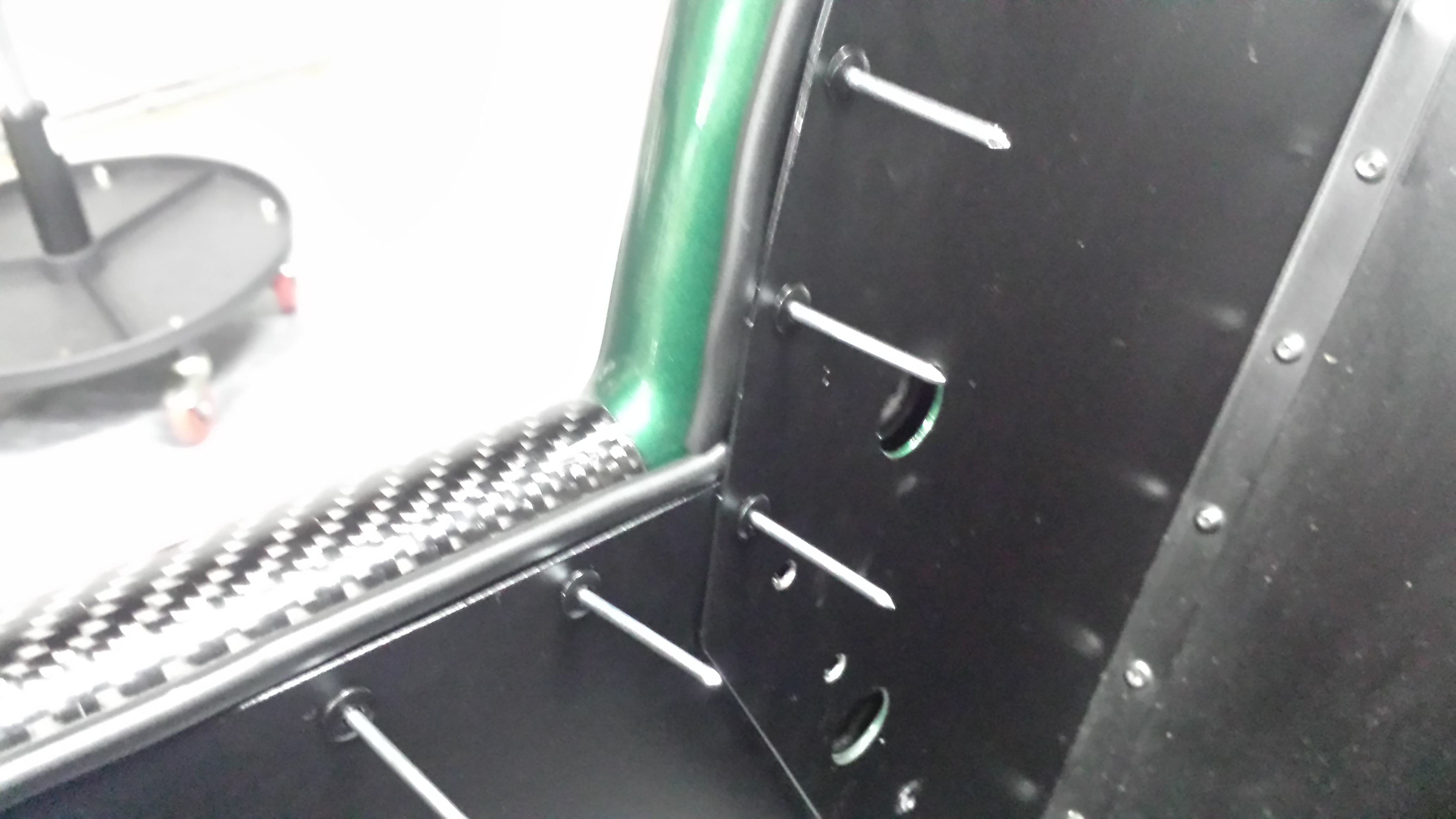 With the trim in place and door sills largely held in with rivets, I moved onto the knee panels. Let me say this bluntly – the knee panel fitment sucks. I mean, it sucks. You’re hunched over the door sill, twisted 90 degrees, trying to line up something that just does not want to naturally fit right, and meanwhile cursing. A lot. Do that for a couple hours and you begin to understand why folks don’t attach these things – there’s gotta be a better way. But regardless, I got mine in finally. An extra set of hands would have been helpful and maybe saved me a little time, but the knee panels are just one of the things that you have to fight your way through.

Finally got them in. There’s not secret – it’s a lot of fiddly, time consuming, alignment. One note, I was actually kind of lucky – all the holes lined up. At first I didn’t think they did because they didn’t seem to slide all the way under the dash, but with a little force they did line up properly. Note the last hole, closest to the engine, did not get a rivet or a screw. There are 8 holes on each side and Caterham only provides 7 screws – I don’t know. Maybe I’ll put a rivet in or a screw later one, not really sure. For now, I just left it alone. Another note now that I think about it, the aluminum cockpit panel on the right side seems to fit oddly, almost like there is a little wave in it. I think it may straighten out once I get the car back on the ground – see my earlier note about the chassis twisting when we moved the car. This may be related. After that I stood up for what felt like the first time in hours. And it was – the sills and knee panels had taken me almost 4 hours of time, most of it hunched over the car. My back was screaming at me by this point, but no rest for the weary! Onward to the transmission carpets.

I hit the first side with some adhesive and tried to stick it on, but it just wouldn’t stick. I thought maybe the adhesive was bad, so ran to Advanced Auto parts for a fresh can. After hitting it again (and again) with the adhesive I still was no better off – thoroughly unimpressed with the Permetex carpet adhesive. Finally, after 5 coats, it started to stick ok and got it into place. With the side carpet in, I moved onto the rear carpet in the cockpit. The vinyl wraps around the rectangular cross-member and attaches underneath. Gave it a healthy dose of adhesive – will see if it sticks. The front side didn’t need any trimming either and only applied glue near the transmission tunnel top and above. 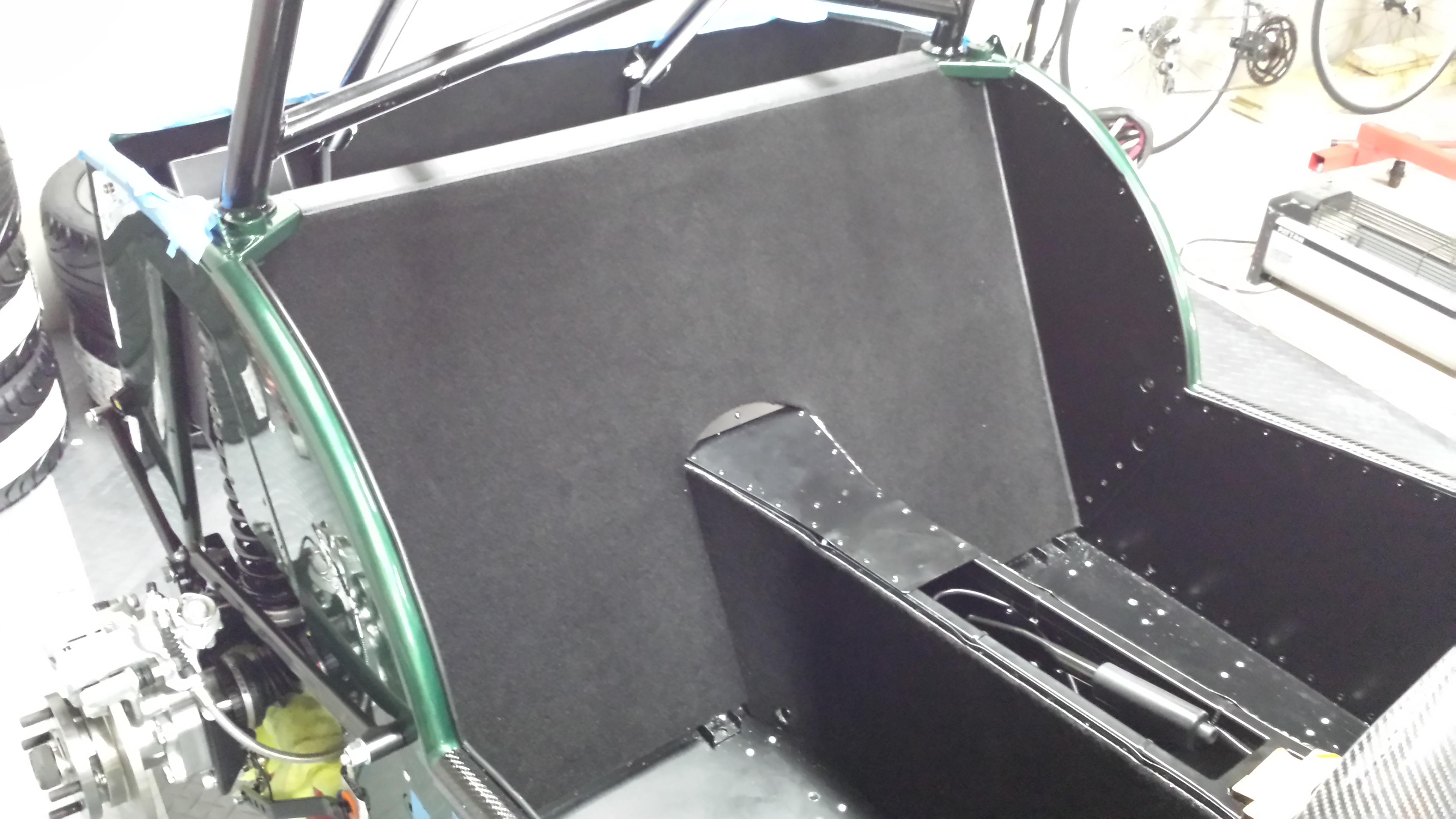 Next up was to replace the coolant hose based on some feedback from Simon. Prior, I’d run a small piece of hose like Caterham advised but Simon deduced a better route was to use a J hose and dip down under the larger engine to radiator pipe. I had a spare J hose in the kit so pulled off the tubing that was there, cut a small J hose, then inserted it and ran it down below as shown in the next picture. This clears the steering column by about 13-14mm, plenty of space, and also freed up the larger radiator hose to run better across the top of the space. It’s a much better solution – thanks Simon! With the hoses done being fiddled, I went ahead and attached the lambda probe into the exhaust. This was easy, just run it under the chassis rail, then back up the engine bay. I’ve got it zip tied against the inside chassis support and seems to be out of the way now; whether it stays or gets moved later is still to be determined. 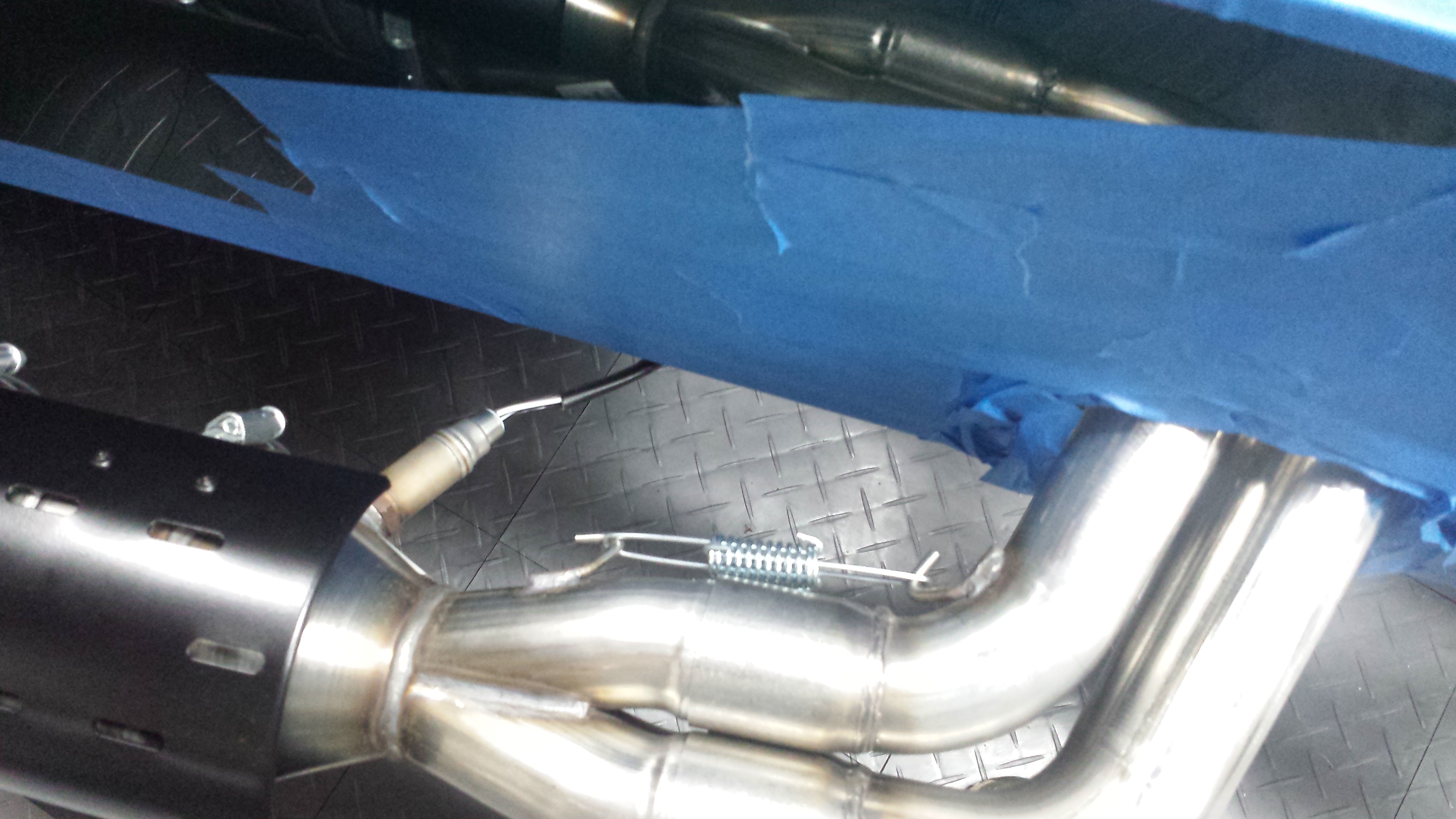 Kim arrived shortly thereafter and my back was killing me by this point. I also hadn’t eaten since breakfast and it was going on 5pm.  Which means its the perfect time to start getting wires into place! 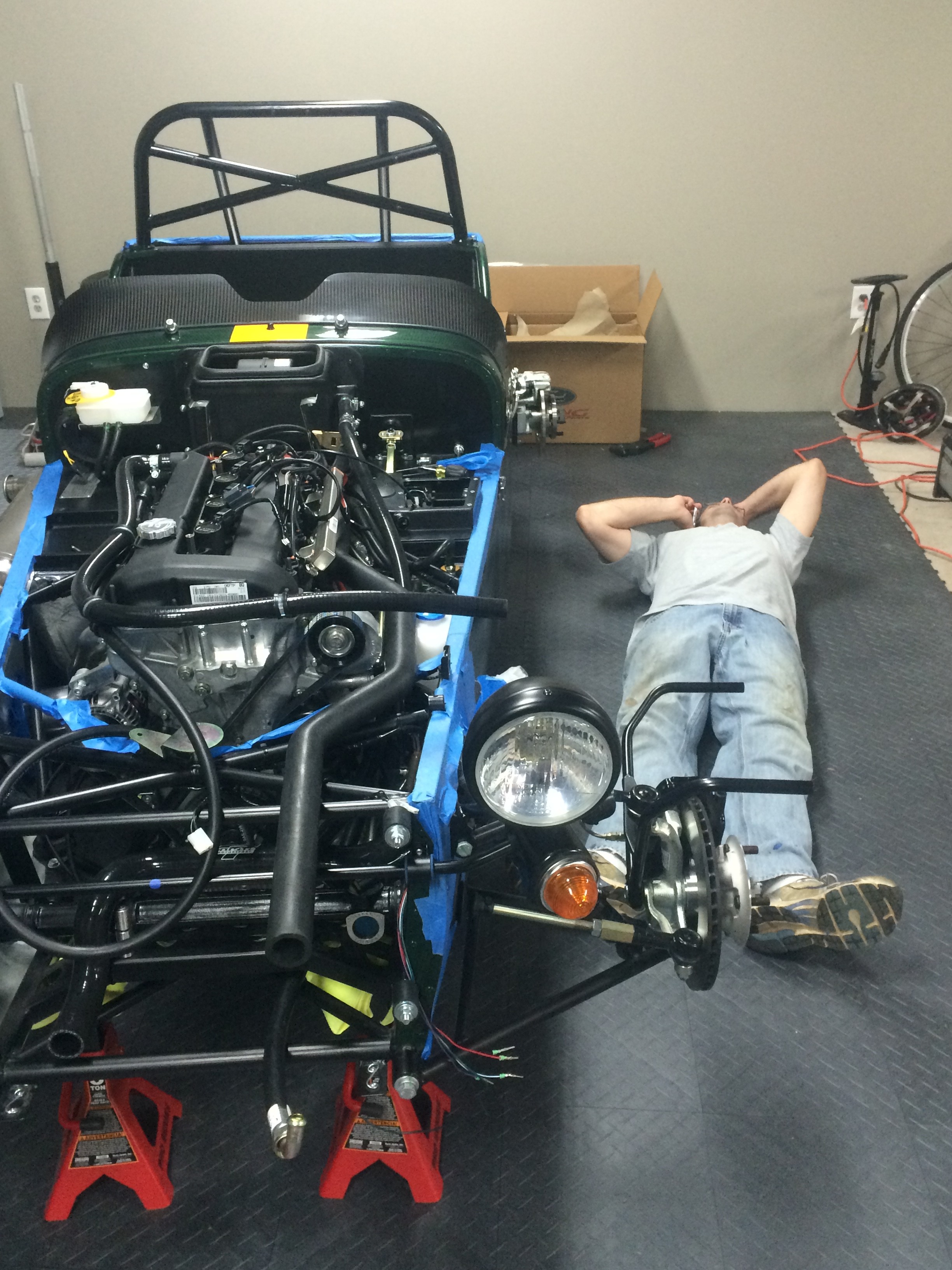 Didn’t get much wiring done after that – while laying there I realized I really had probably overdone it and it was time to get ready for dinner regardless.