After a few weeks of sporadic build time the day was finally here. I’d got as much done as I could then it was time to call in the big guns – Adam and Mick – to get the last few things in and to hopefully get it installed. After some coordination we agreed Saturday morning at 8:30 would work best to get an early start.

At 7:30 I was down in the garage getting things situated and unwrapped so we could get started right away when they got there. I first added a few layers of tape to the engine bay. In hindsight I should have used multiple layers of tape or maybe some card stock – the single layer was not enough to prevent some scratches from the engine. 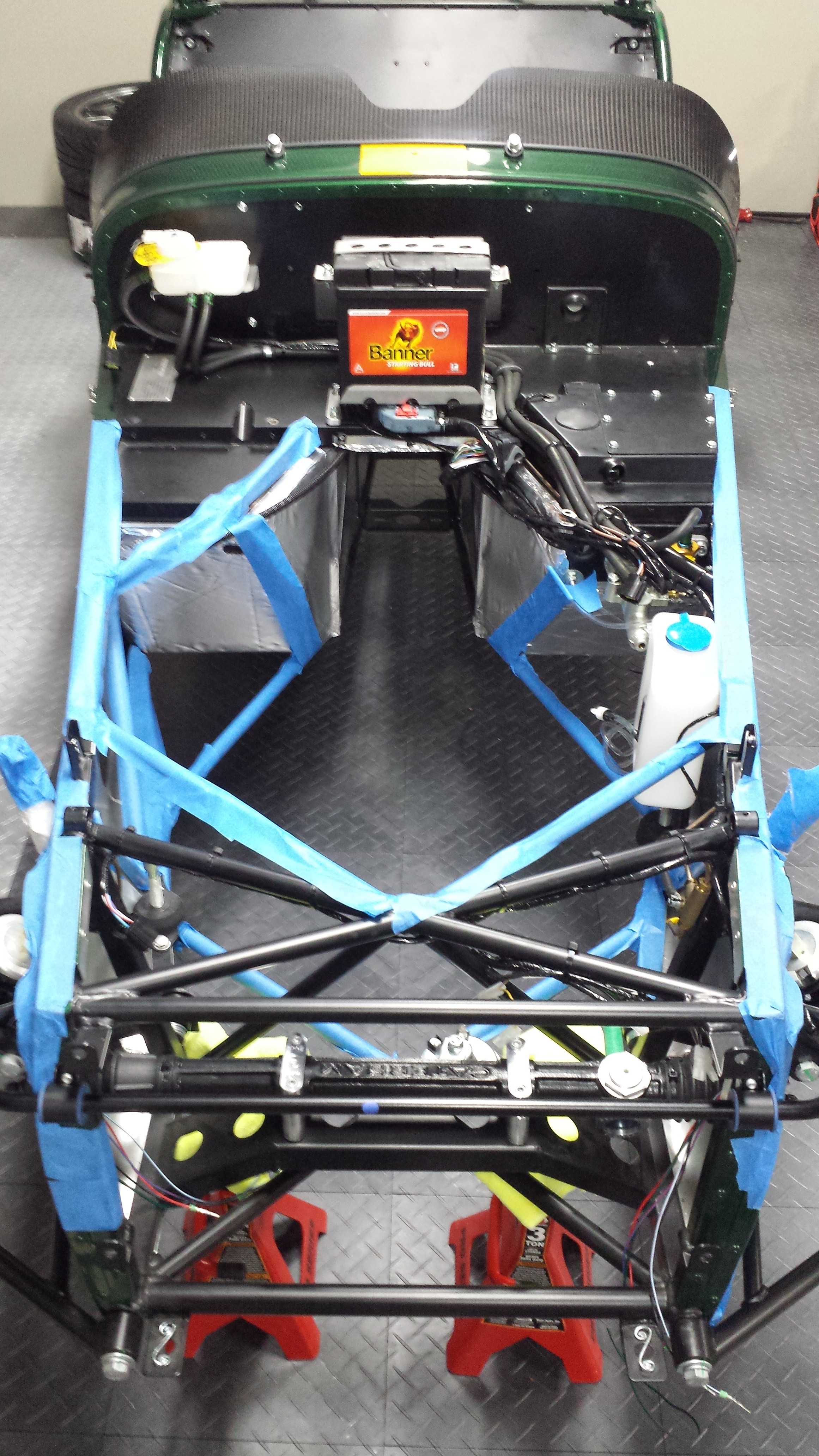 Adam arrived shortly there after and we set about getting the clutch and bellhousing figured out. I’d taken a stab at it earlier that morning and couldn’t figure out how to get things lined up since the clutch pulley wouldn’t line up with the hole in the bellhousing.

Then I remembered the odd shaped metal disc we’d found wedged into the water pulley several weeks back. I rescued it from the box it was in, lined up the holes, and viola! Everything then lined up. Pic of the bolts, spacer, and clutch pulley below. Note the L shaped hose was not used – it was taken off the clutch pulley and a flexible steel hose put in its place through the bellhousing. 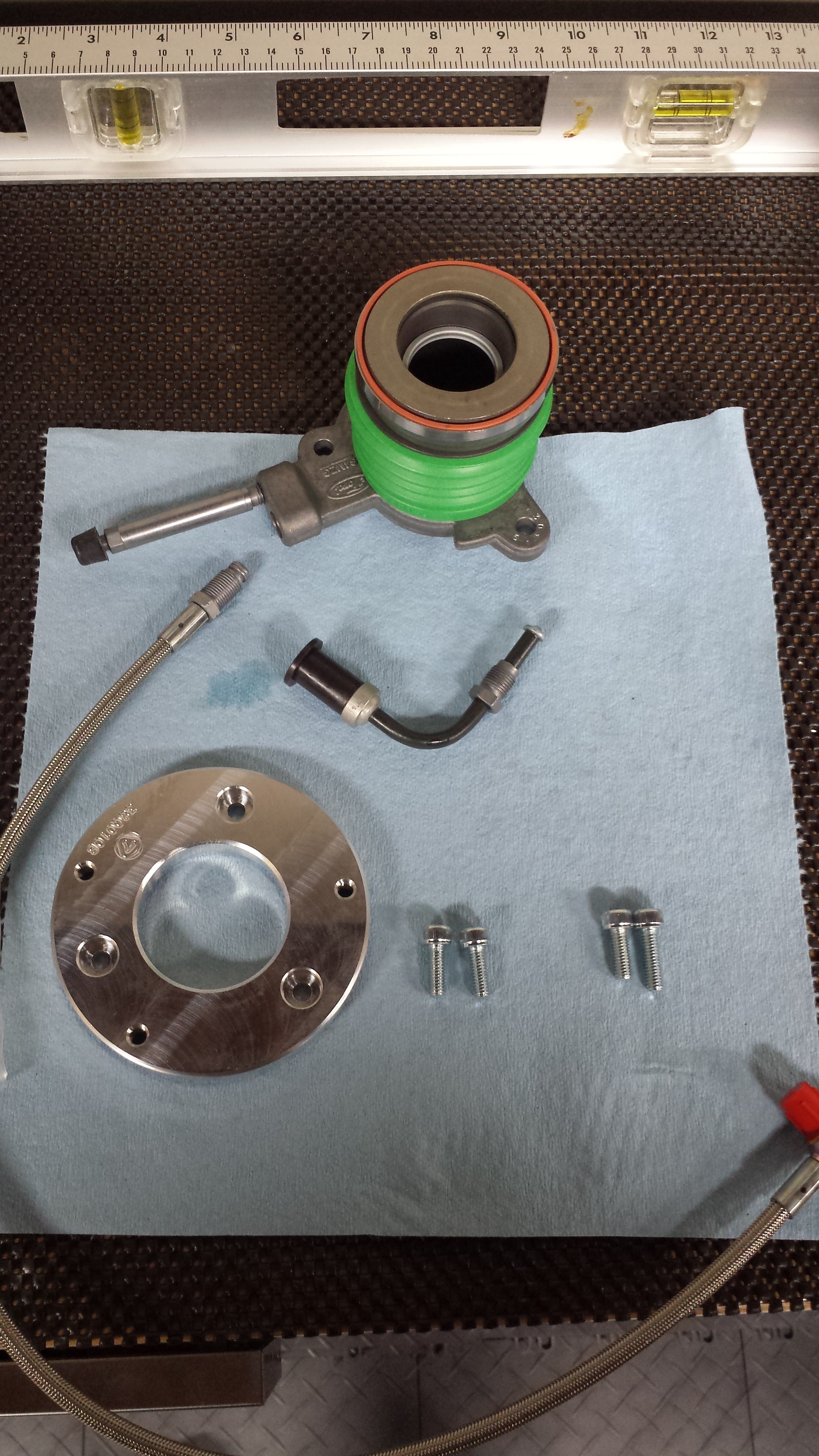 Something we noticed that was a bit odd, hopefully not an issue, is the space around the edge of the pulley when depressed wasn’t quite symmetric. It appears to operate fine but noting in case someone has similar experiences. 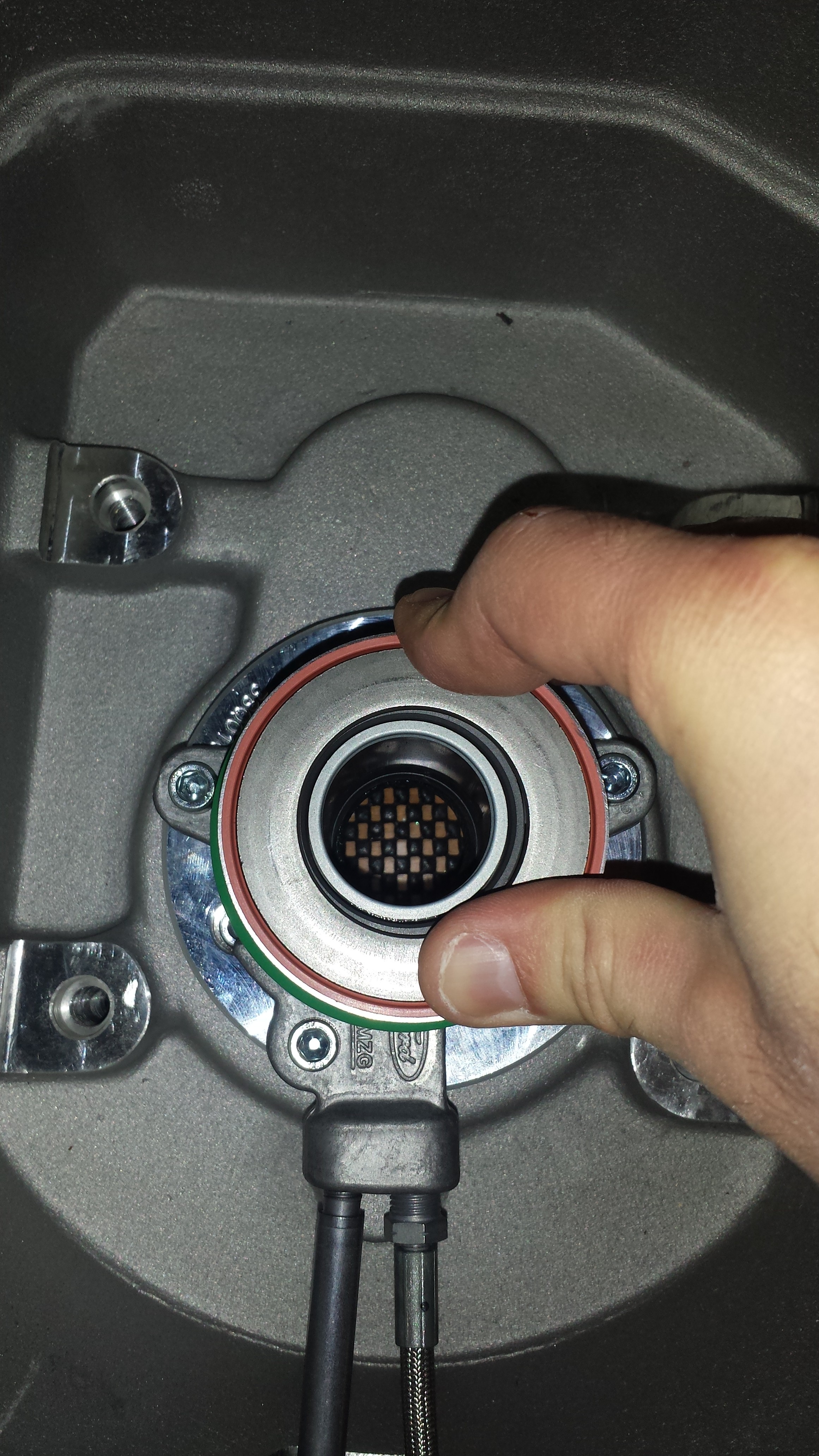 With the bellhousing sorted out Adam began getting the hoist attached so it could come off the stand. I captured one last pic of it on there before it’s taken down. 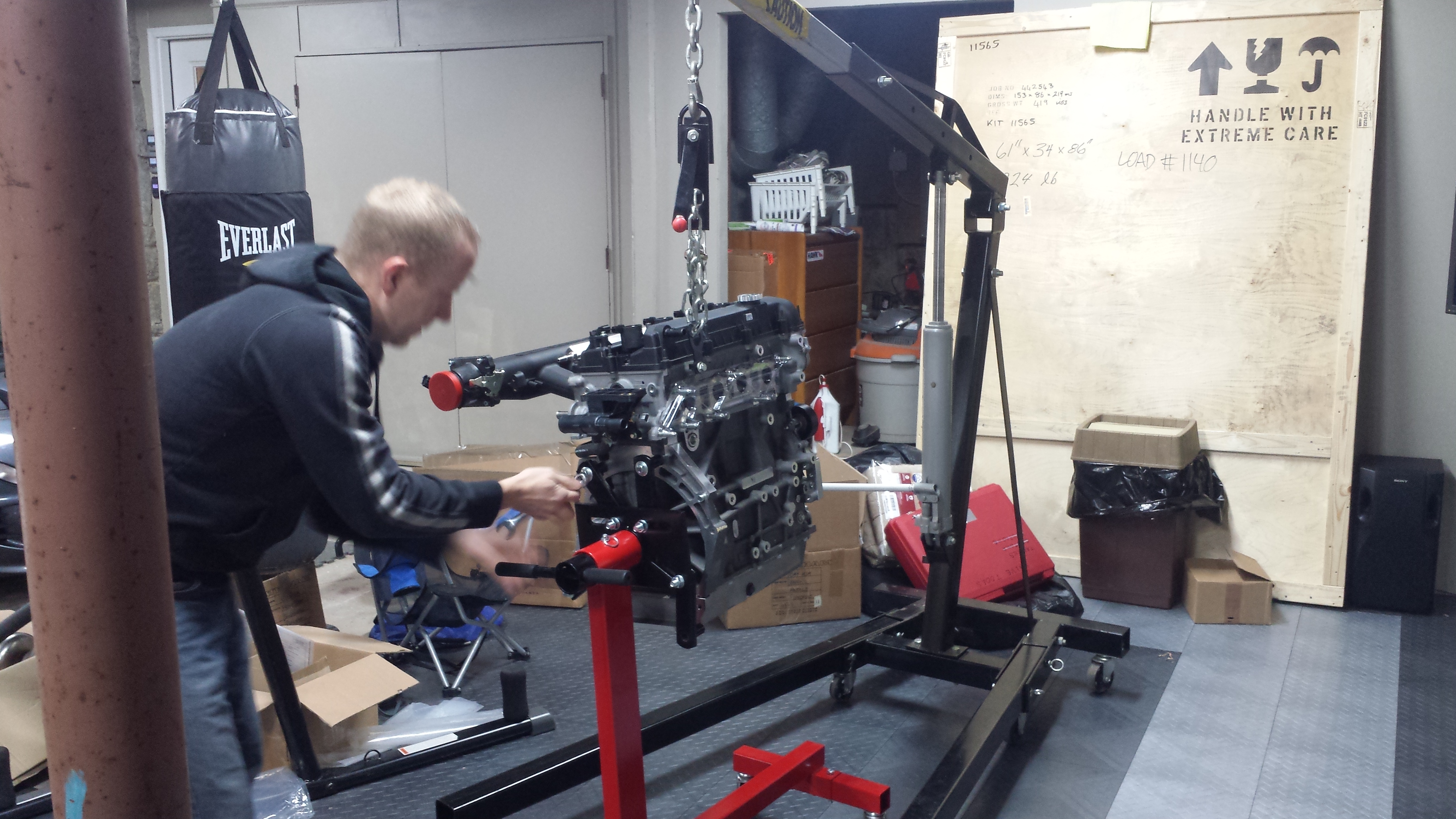 Once on the hoist we first attached the flywheel. Bolts were in the engine parts bag and torqued down to what was in the Haynes manual in 3 stages. 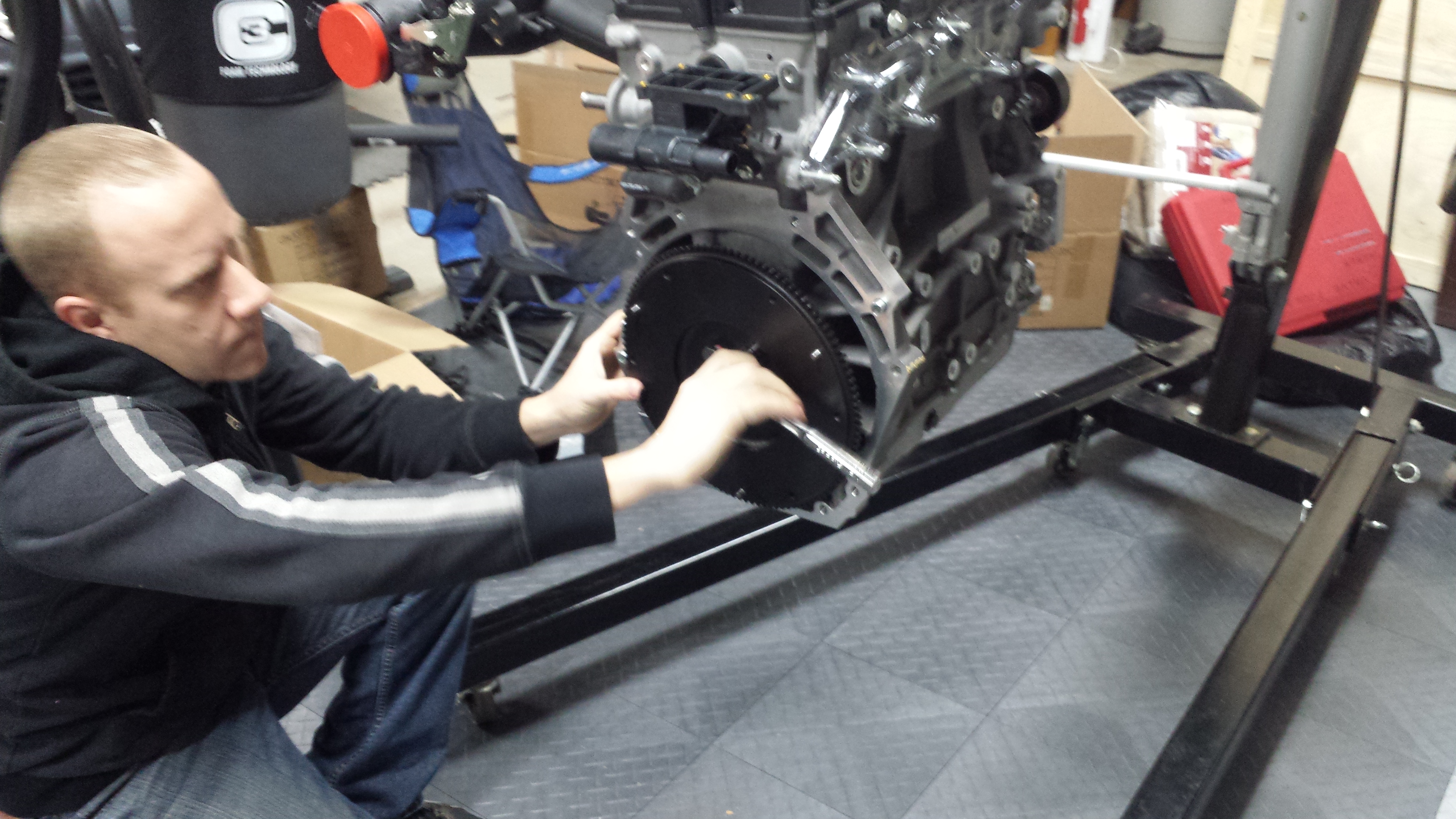 Once torqued we moved onto the pressure plate and clutch. The clutch did not include an alignment tool so we used the drive shaft on the transmission to align it before tightening everything in. It was kind of a pain in the ass and I have no idea why they don’t provide a clutch alignment tool like every other clutch I’ve seen but whatever.

With the engine about ready, and Mick’s arrival, we set about getting the transmission prepped. There are a few plastic plugs that come out, new plugs hammered into place, reverse switch installed and torqued, and the rubber / metal mounting attached. It was fairly well laid out in the manual how to prep the transmission. We also greased up the splines for easy insertion (“that’s what she said!”, courtesy of Mick). 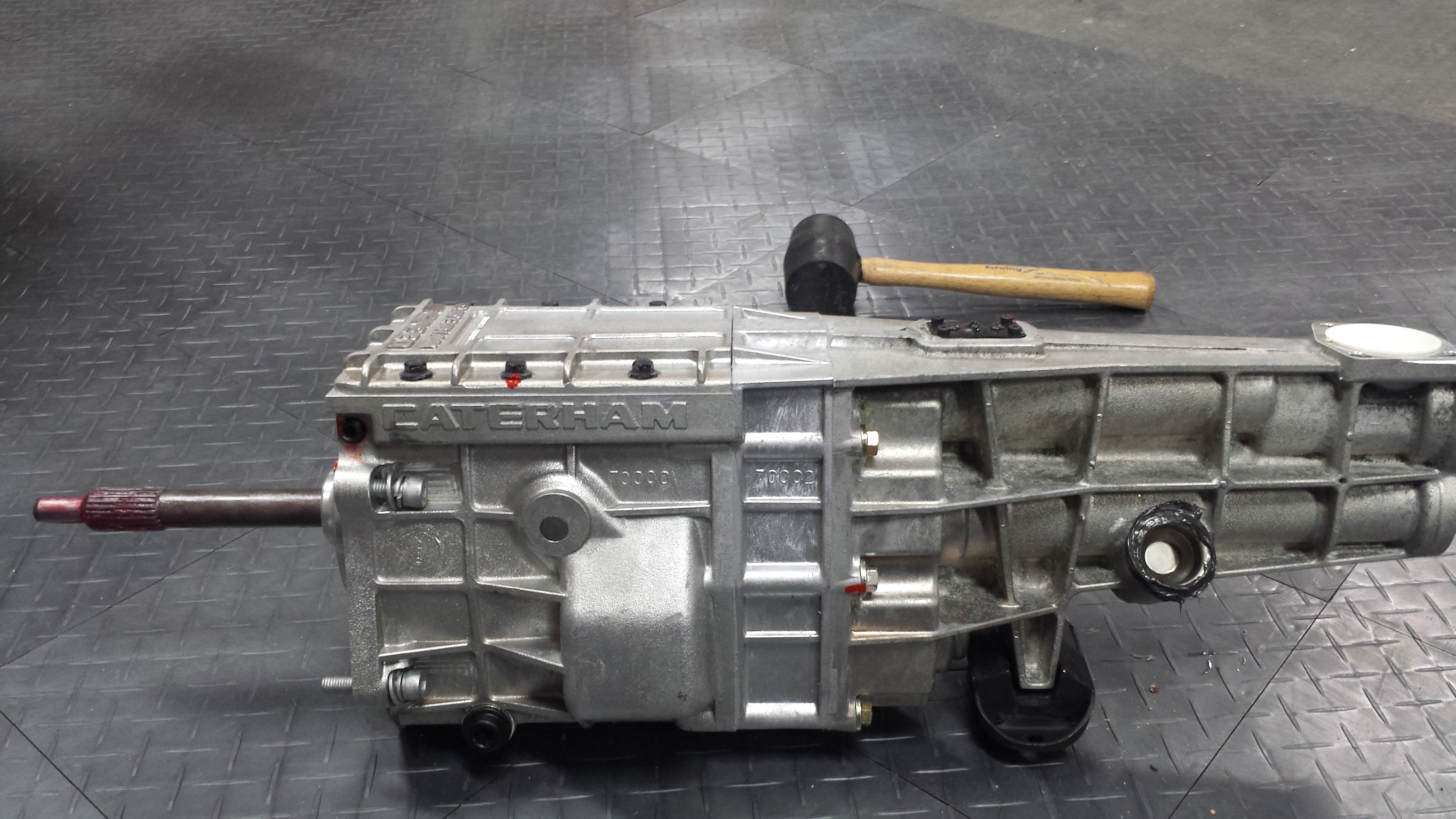 A few notes and fuck ups we had….

With the transmission prepped we moved onto fitting all of it together – engine, bellhousing, and transmission. And that’s where it all went off the rails. First, the manual is entirely unclear on what bolts where and with what setup. There’s a number of ways I can think of to make the manual more clear – unfortunately the manual is not any of those ways.

The problem we kept running into was the drive shaft would go in, splines align, then get stopped about 5mm shy of the bellhousing and transmission surfaces mating cleanly. It was perplexing. It was definitely hitting something, we could feel it as the shaft was going in. We tried varied methods of connecting and after a phone call to Randy (Caterham dealer I went through) we decided to disassemble the bellhousing to engine and try to fit the transmission to the bellhousing with nothing on the other side.

And that highlighted the problem! The transmission face is held on with a few small bolts. Those were contacting the bellhousing face preventing it from going all the way in. The bolts were torqued and aligned but just ever so slightly larger than the face of the bellhousing. The solution – out comes the rubber mallet. After a few taps everything seated fine and we proceeded to bolt the trans to the bellhousing with the provided bolts, spring washers, and plain washers. A wobble bit was key here – it’s impossible to get a regular allen wrench / socket into the right spots due to the design of the transmission casing.

With the transmission and bellhousing joined we proceeded to mating it with the engine. Prior to doing that though, someone said “let’s sign our names” so we did.  A little piece of nostalgia.

Once attached to the engine, the entire assembly was picked up with the hoist and shuffled over the car. A quick time out for a picture or two then proceeded to lower it into place. 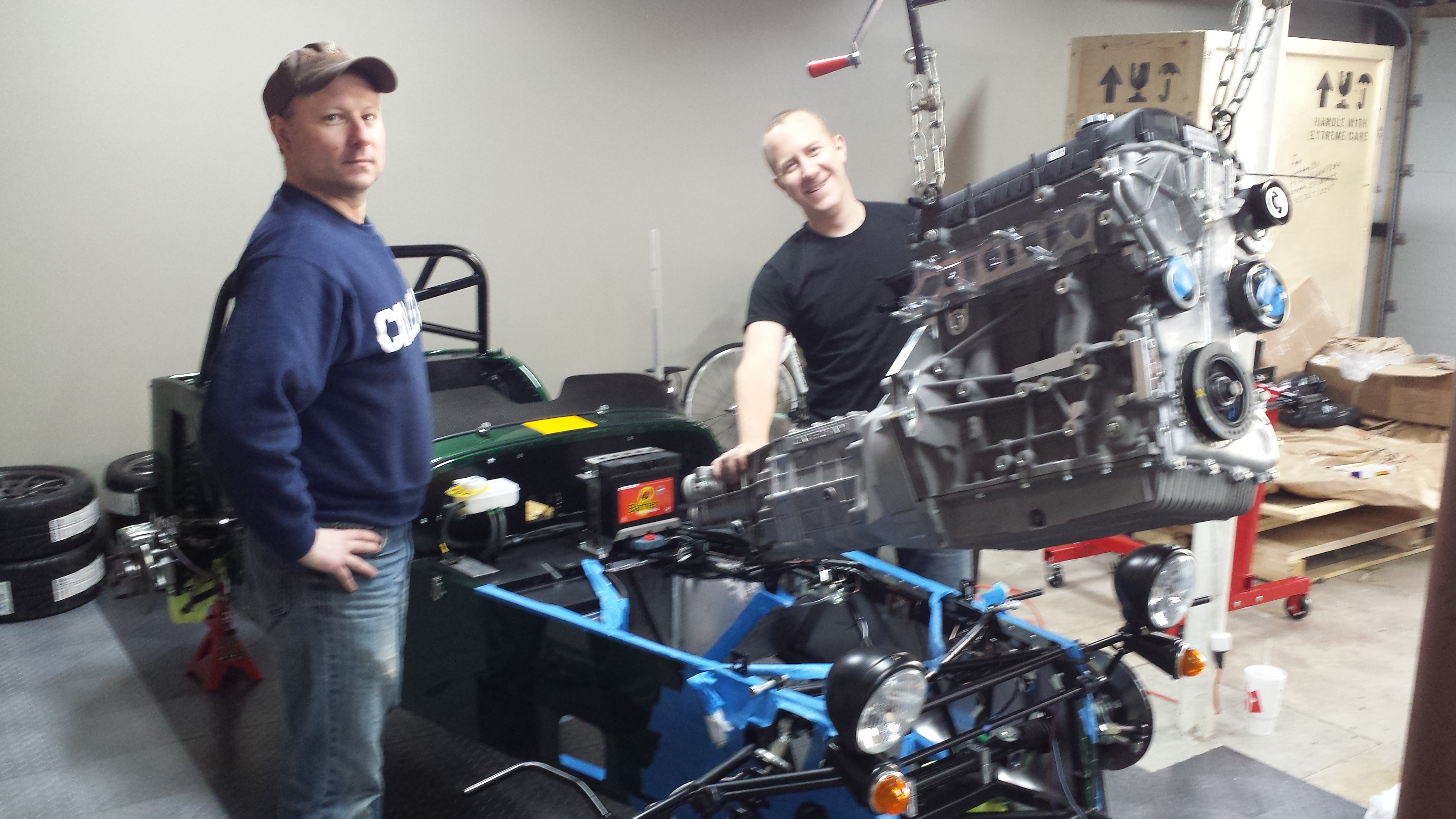 Fitment is TIGHT! Like literally millimeters to spare, but if you go slow and protect all the internals with tape and rags you’ll get through just fine.

Aligning the transmission was a bit of nuisance but its a combination of over, down, over, down, and in it goes. Once in we popped the end cap off and inserted the driveshaft after greasing it up first (“that’s what she said”, per Mick).

As the engine was lowered into place we fitted the engine mounts and attached them to the rubber mounting blocks. The key here is to go slow and attach the engine mounts loosely then jiggle everything around. At the end of it all, we had the engine slightly too far to the right and it was contacting the heat shielding on the transmission tunnel (tore it a bit, but can be fixed with some reflective tape). Additionally, getting the transmission centered was a bit of a pain – a pry bar and a little movement on the engine got it where it needed to be. DO NOT TAKE THE HOIST OFF THE ENGINE UNTIL YOU’RE HAPPY WITH THE FITMENT!

By this point it was well passed when Adam and Mick were supposed to be home, and wives can’t be kept waiting (too long) so they left and I started picking up the garage from the day’s work.

I couldn’t believe it … but the engine was in!! 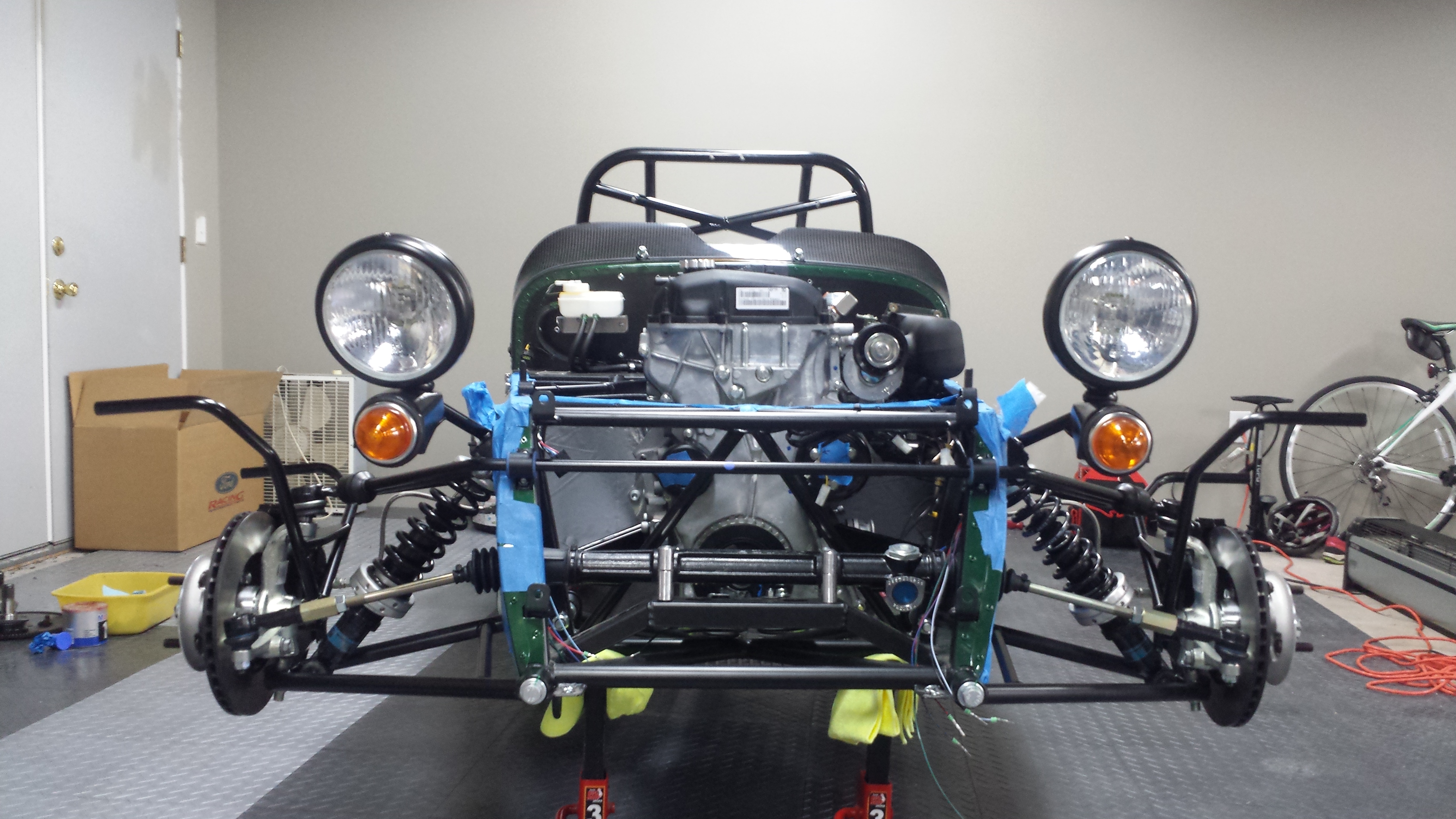