With a little bit of time before me, I went down to the garage to take car of a few fiddly things and spend some more time on the engine prep.

First order of business was to flip the left hand side brake line that I noticed was curved opposite the right side. Easy enough; took off the stainless line from the caliper, twisted 180 degrees, reattached. Didn’t take a pic because it’s just a brake line.

Next up was to try and tackle the horns. I’d read elsewhere that the nuts are on tight and to use a breaker bar to get it loose. They were not joking! That thing is on solid! And because the horns are so small, and the connecting rod so short and flexible, there is no way I could get the nut loose. I tried attaching it to the car and then having a go at it without success. Well, to be fair I did succeed in scratching the shit out of the horn mount in the car, but didn’t get it loose. I’ll have to get a vice from Home Depot sometime in the next few days and do it that way.

Since the horns weren’t getting sorted tonight I transitioned back to the engine. As I’ve mentioned before, there’s no manual so you kind of figure it out as you go. I started by making little assemblies on the work bench trying different nuts and such, then comparing to pictures in other build blogs, then attaching to the engine.

First up was the EGR blanking plate but couldn’t find it anywhere. Finally, after a 15 minute search, discovered it hidden among some screws in the engine bag. Gratuitous shot of the bag and plate just to give you a sense of what I’m up against.

Pulled it out, found some recessed bolts that fit, then went about attaching the blanking plate to the engine. It should have been quite simple, but since I’d already attached the coolant adapter I couldn’t get to the bolts and the wrench got stuck. I tried being lazy and getting it off without removing the coolant adapter but no luck.

Took that off, then took off the EGR valve, put on the gasket and blanking plate, then the adapter back on after. It occurred to me it took 45 minutes to attach 1 part and 2 screws and to do so required taking off something I’d already attached… which means I did it properly! Ha! By the way, the blanking plate was put on at 20 NM with blue locktite based off what I read on the Focus Fanatics forum since there wasn’t any guidance from Haynes or Caterham. 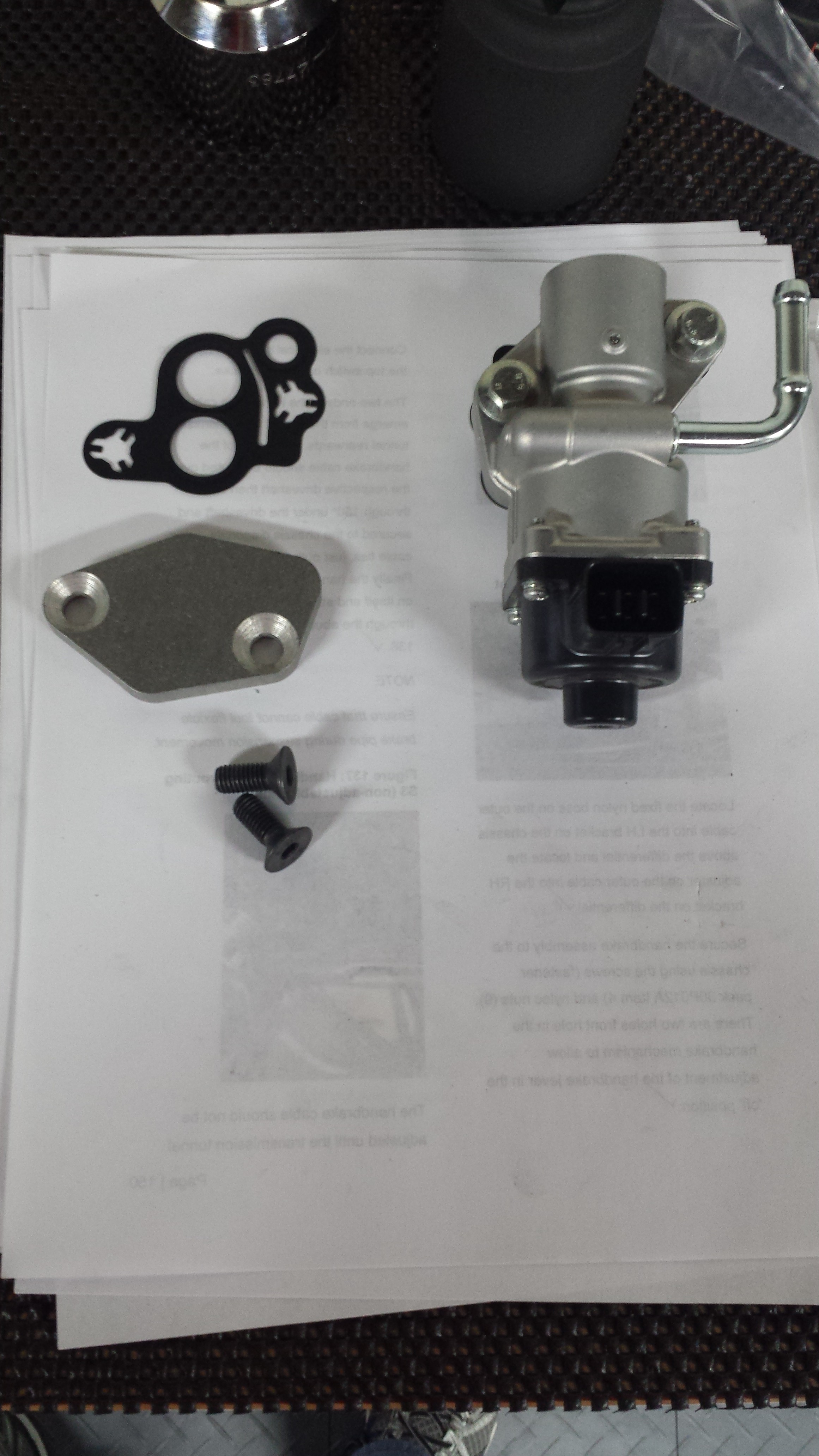 EGR valve from the stock motor, blanking plate, bolts that fit, and gasket. And a shot of it in place.

Next up was the idler pulley. Attached that based on pictures from other blog posts with the three bolts that fit. Torqued to 18 ft lb.

And where it goes on the engine. 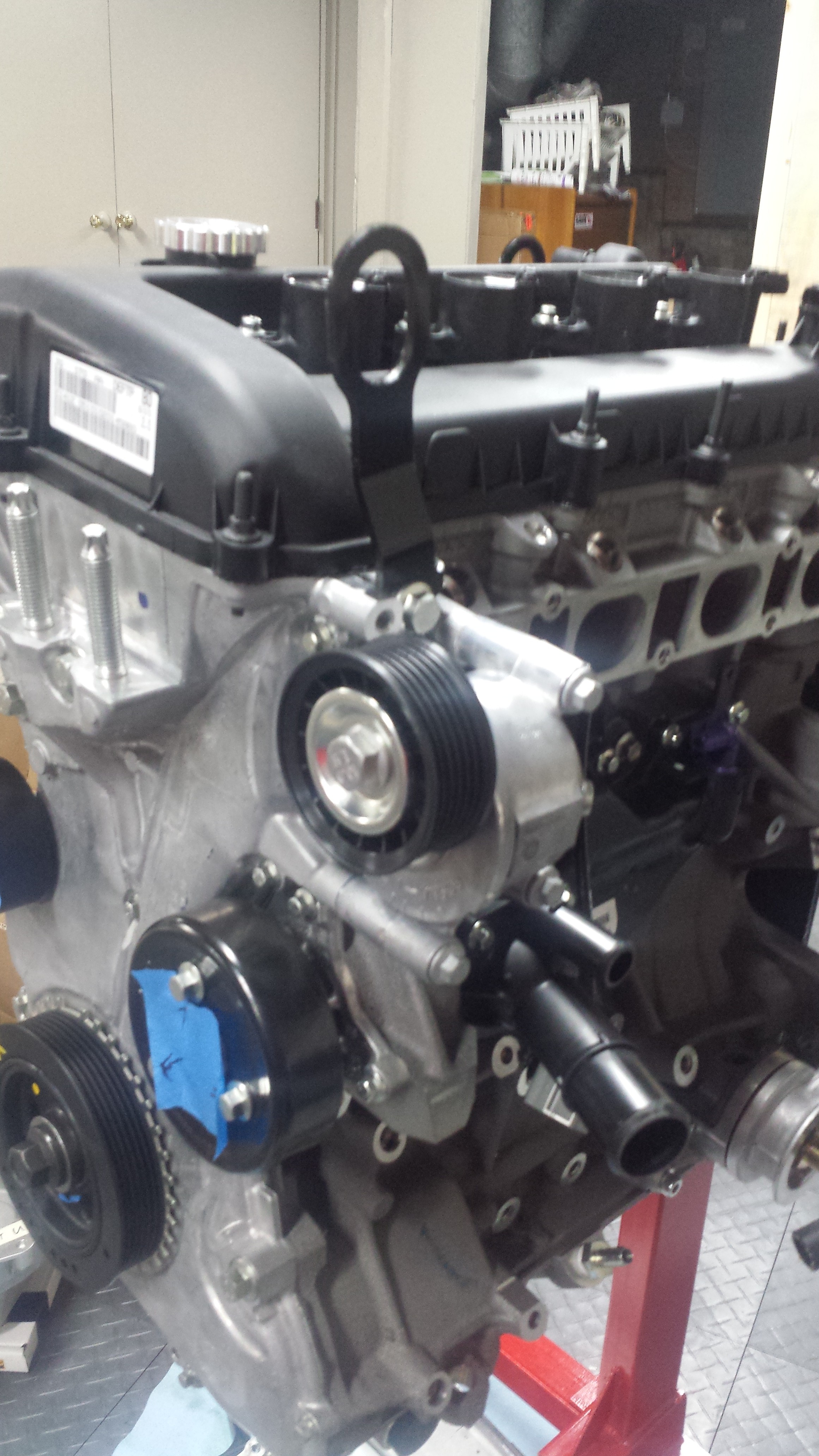 After that, I removed the knock sensor since it’s not needed. I wasn’t sure if anything replaced it or if I needed to put a screw back in there or not so put a post up on USA7s.net.

Consensus is nothing goes there. I shined a flashlight in the hole and it’s sealed. Easy enough. 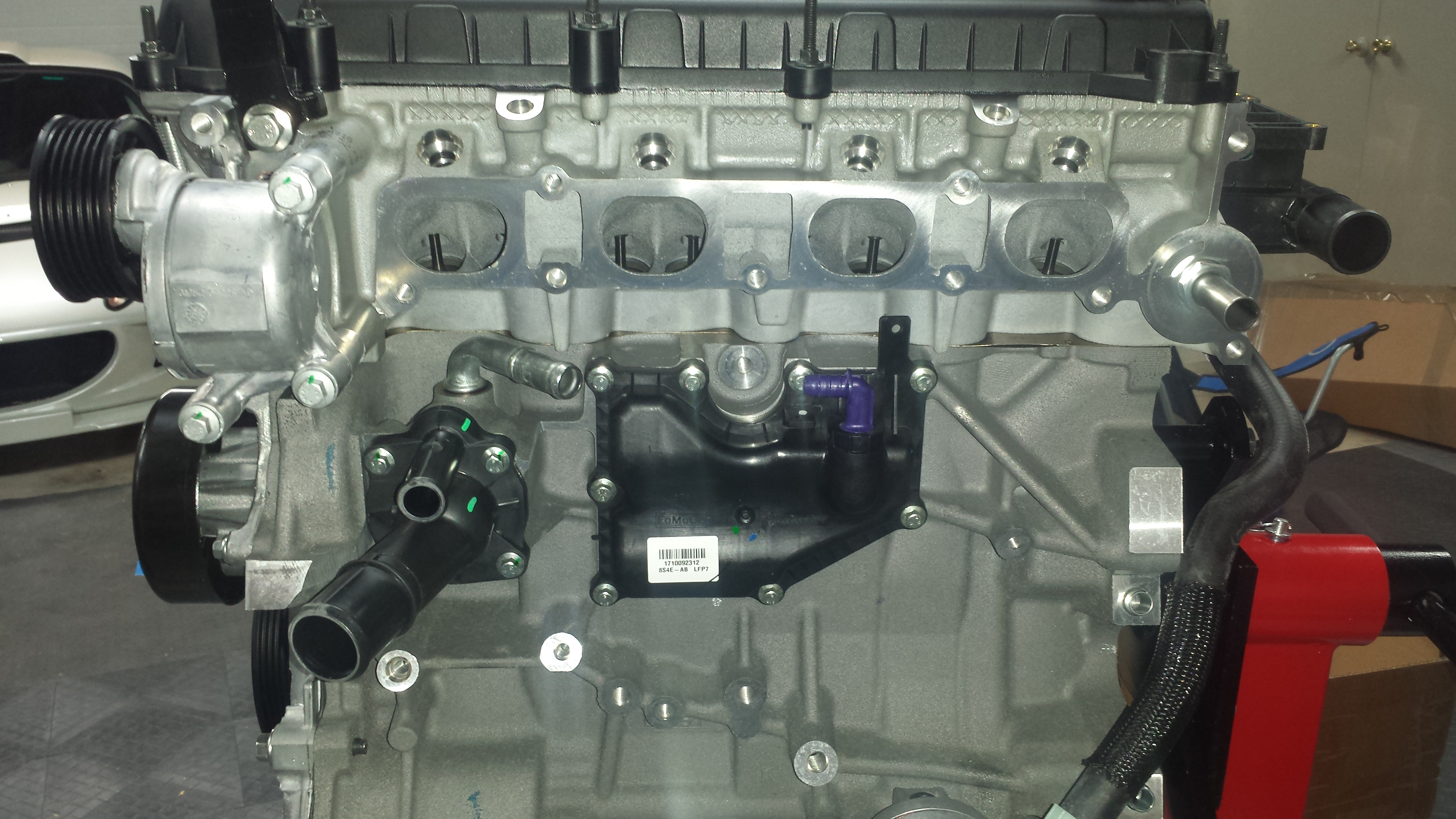 I then tried to put the pulley extension on but couldn’t find the bolts to use for the pulley itself. Will have to figure that out with the left over bolts from the pack when everything else is on… or I’m missing more parts. Not sure so just moved on. 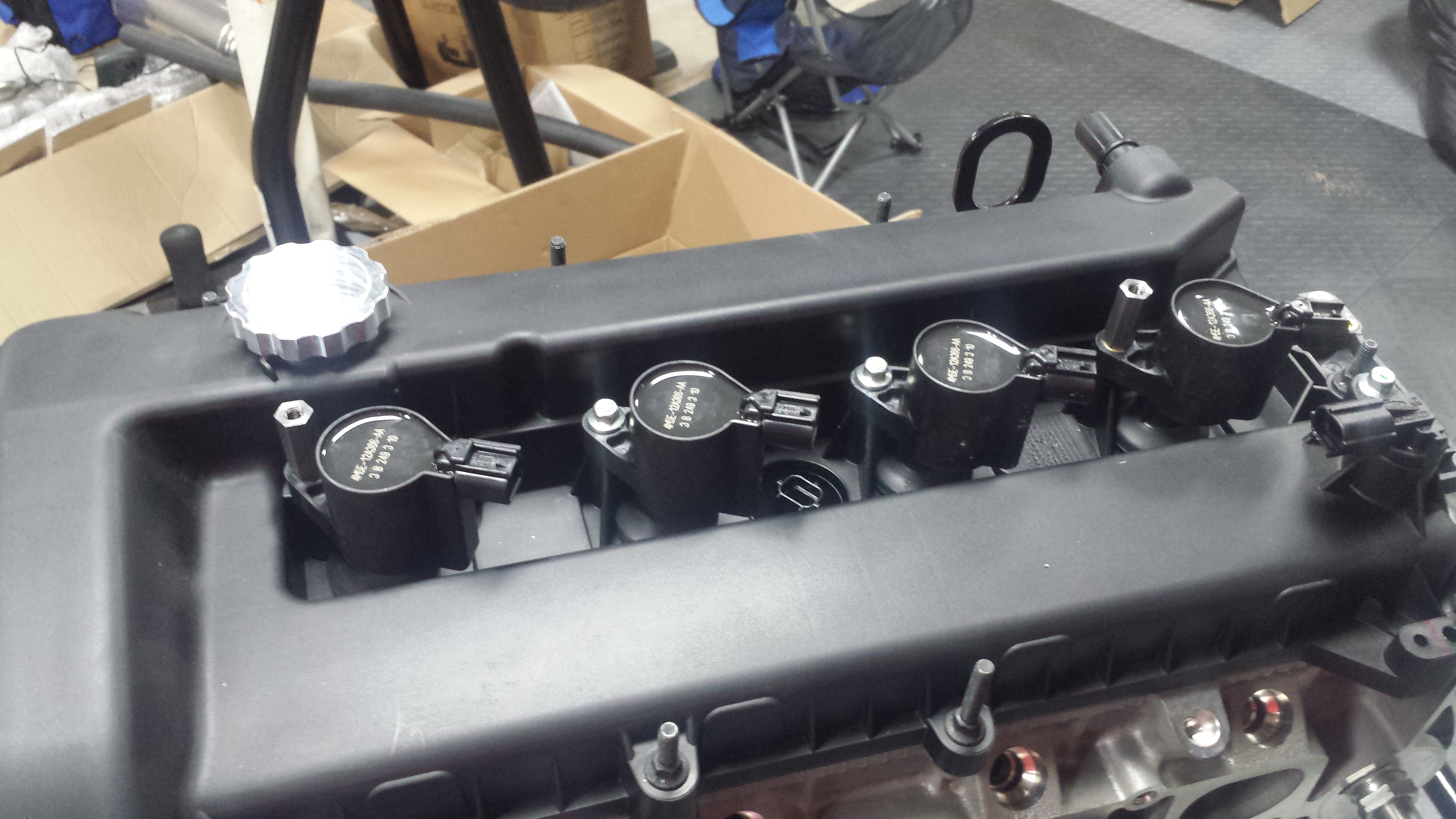 Laid the coil cover on top, put in two bolts loosely into either end, and looks like that’s how it goes. The cover is a little tight and wouldn’t quite line up, but a little Dremel or drill action will fix that when I attach for good.

Since I was already working right there I went ahead and assembled the intake manifold and throttle body. Fairly straight forward, just found 4 bolts that fit the throttle body to intake and 5 bolts plus washers for the manifold to engine block. Took a little searching for the 5 bolts but found them in the end (one was already on the engine for another part so swapped it with a different bolt). The manifold looked weird sitting there though like it wanted a gasket or something… 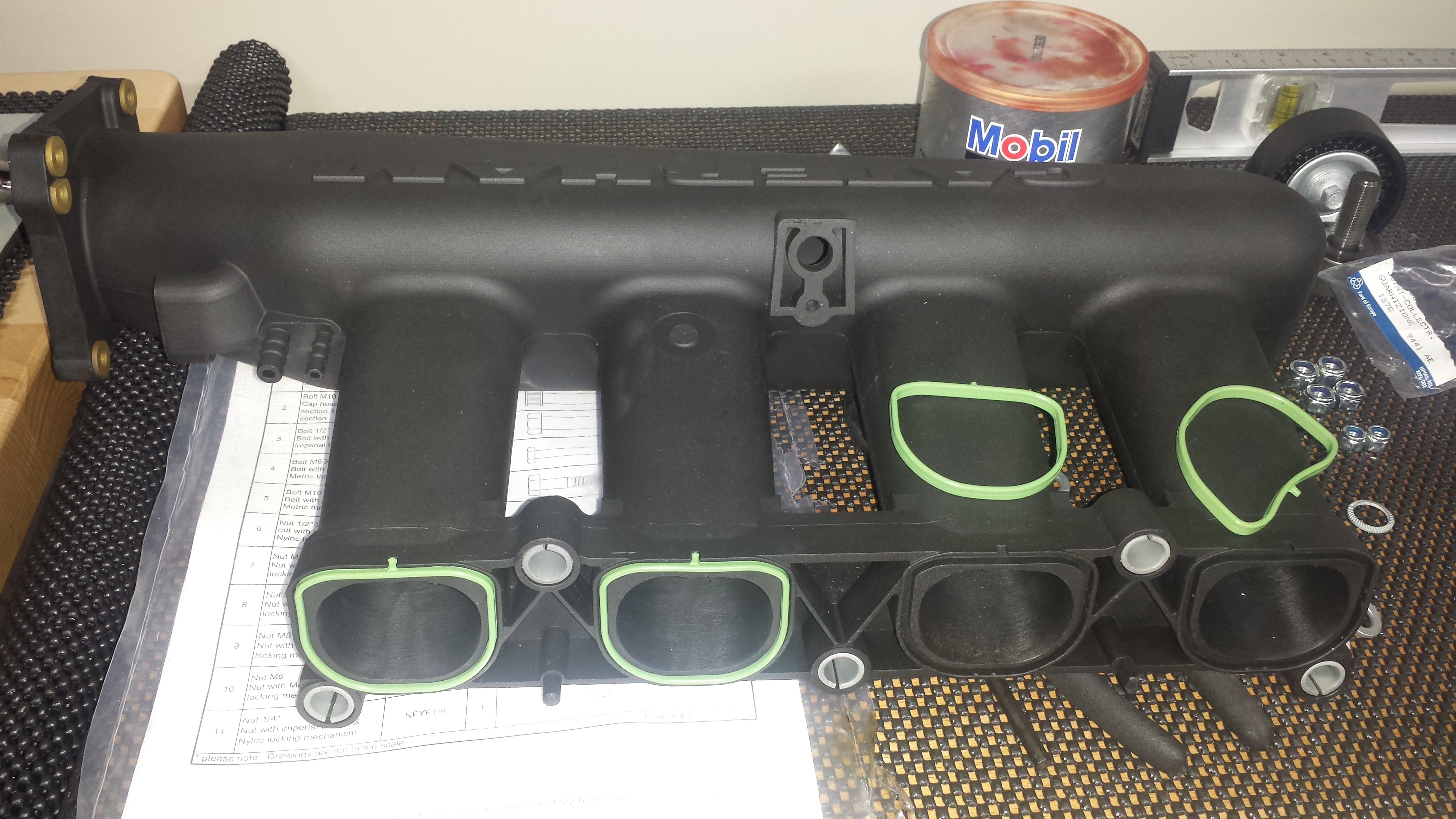 AHA! So that’s what those green things are. Added the 4 green gaskets into place then bolted it in. 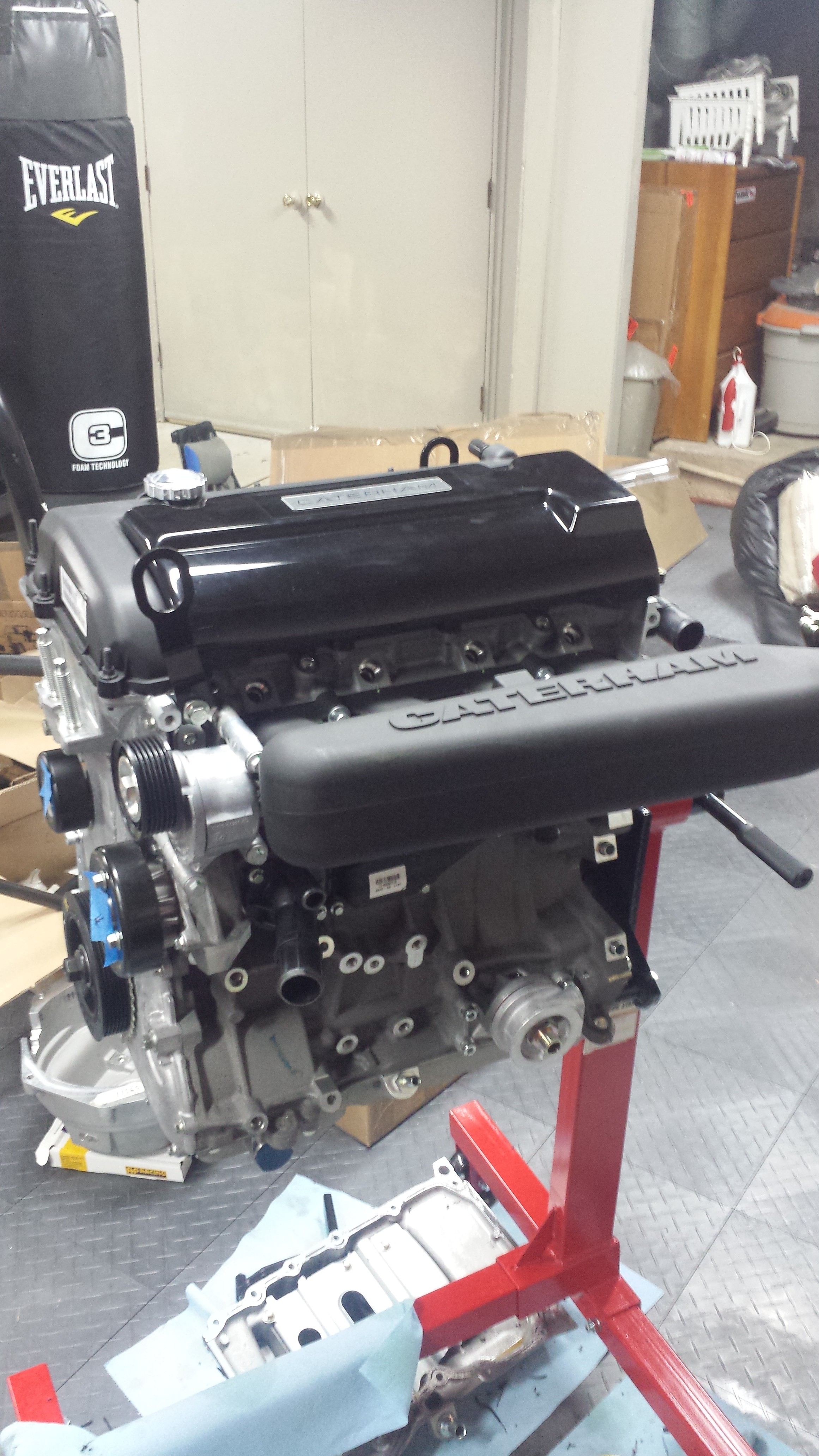 Next up was the fuel rail. The rail looked different than the stock one and it had these odd white caps on the end of the injectors.

After debating what to do about the white caps, i.e. were they just there for shipping protection and needed to come off or were they supposed to be on there, I ended up comparing to the stock injectors. What I found is the length of the injector was different, but the rubber O rings and the plastic white caps aligned with the black plastic ring and O ring on the stock ones. I took that to mean they stay on. Attached to the engine with 2 bolts. Forget the torque spec but it was either in the Haynes manual or on the Focus Fanatics forum.

Once I was comfortable I’d attached that right I moved onto the alternator mount. I couldn’t quite come to terms with what went where so just left it aside as I couldn’t attach it anyway – it comes off when the engine goes into the car. Notice in the pic below the varied differences in the bolts… that’s what makes this so tough. 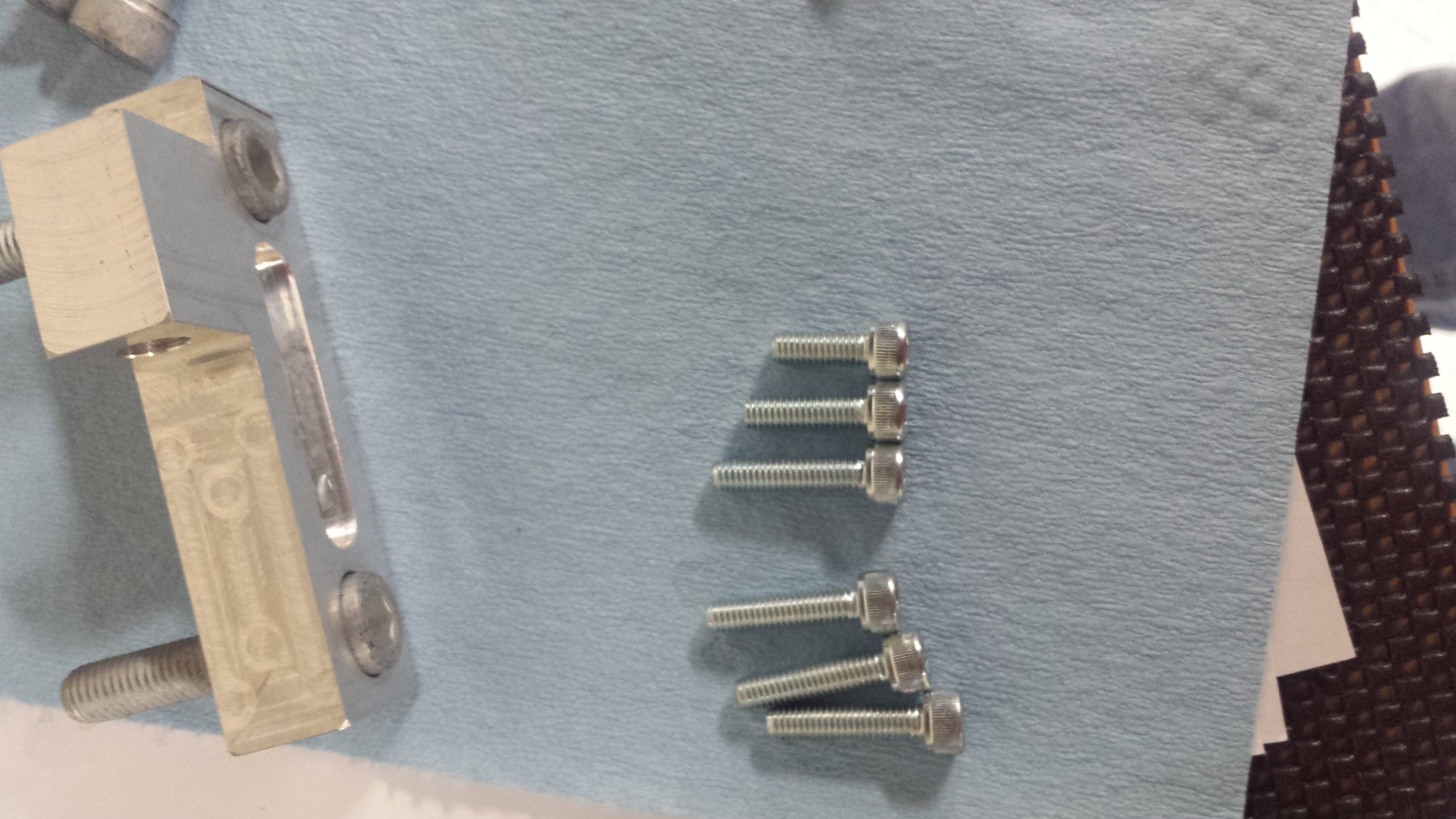 By this point I was running out of gas and had been in the garage for a couple hours. Chris came by to join me in a beer and get a look at the car right about then so switched off to figuring out the coolant temp sender.

From previous blog posts I knew where it went, but wasn’t sure how to attach it. After scouring the parts bag, and poking at it, we finally figured out it slotted into an embedded groove with a little wire retainer to hold it. Clearance was tight – you really got to push the sender in then get the wire in there. Was a pain in the ass but got it done in the end (thanks Chris!). Ohh, and to get it in I had to take the coolant adapter off. Again. I think that was the 4th time it had been taken off and put back on.

After enjoying a lengthy tour of the car and a beer, I scrapped off the coating on the engine mount and the chassis rail of the car so it would get a good ground. A flat bladed screw driver did the trick nicely for both jobs. Note, the bolt for that hole is 5mm longer than the other end. Make sure to get them properly situated since you’ll also attach the earth lead to that hole / bolt.

After prepping the mount in they went. As others have reported, my bolts did not cleanly go through the sheet metal at the bottom of the chassis rail. I should have screwed them through, after boring out a little with a drill bit, but went to the rubber mallet first. Not a wise choice. No permanent damage, but didn’t help at all. A little massage with the drill and hitting it with the socket wrench got them in. Right and left side mounts attached.

Left side attached with earth lead. 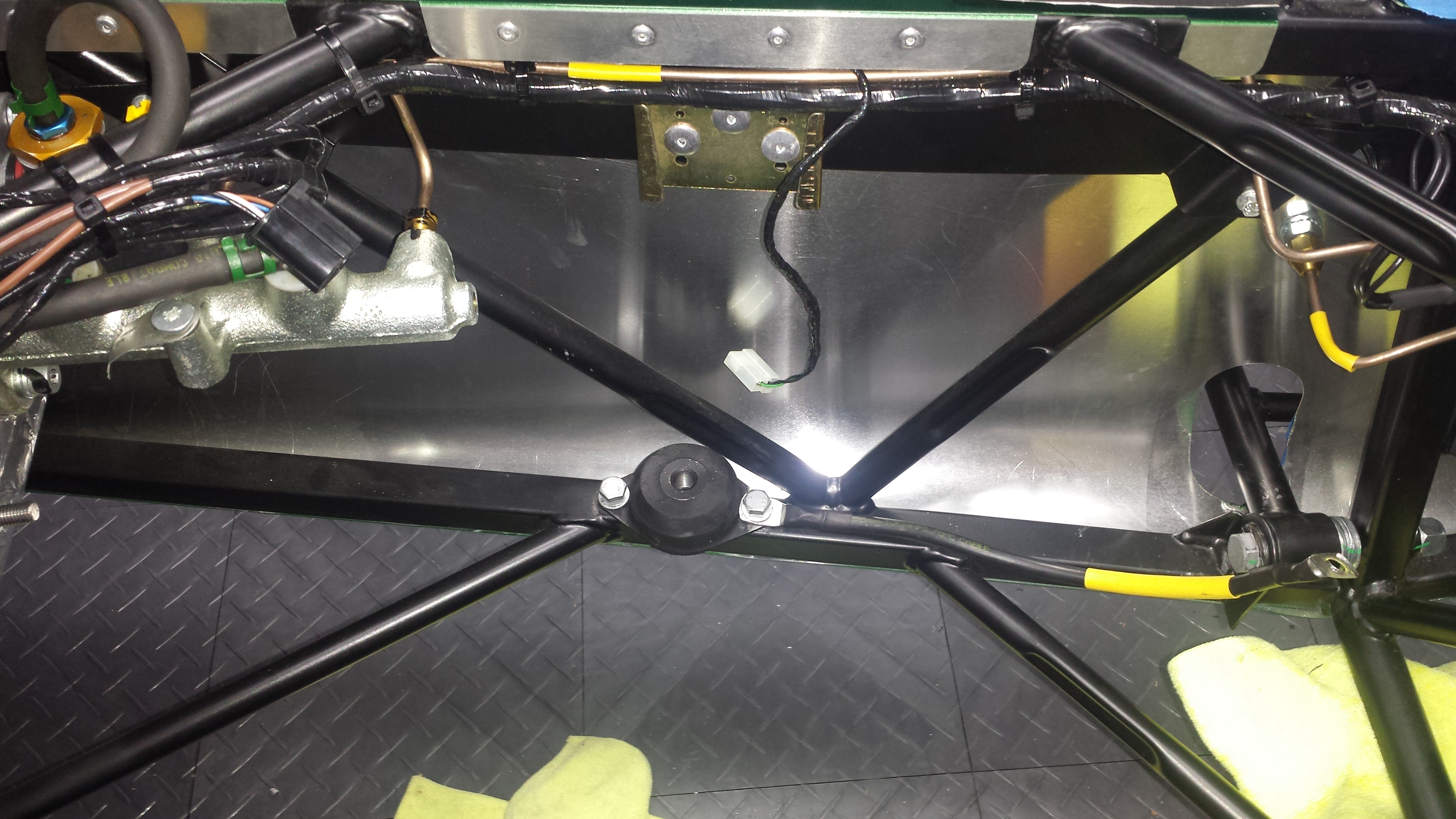 Chris then help run the washer bottle tube and mount the washer bottle. In the manual it says to locate the bottle in front of the passenger side footbox on the bracket but this is incorrect for a left hand drive Seven. It should be mounted under the intake as shown here (or where the intake will be eventually). As others have reported the bracket is blocked with the wiring harness and frame rail. To get to it, push the wiring harness up and out of the way (but may require clipping a cable tie), then take out the 4 small bolts holding it to the chassis rail. Slip in the washer bottle then re-attach. No torque spec, just make it tight then a bit more. 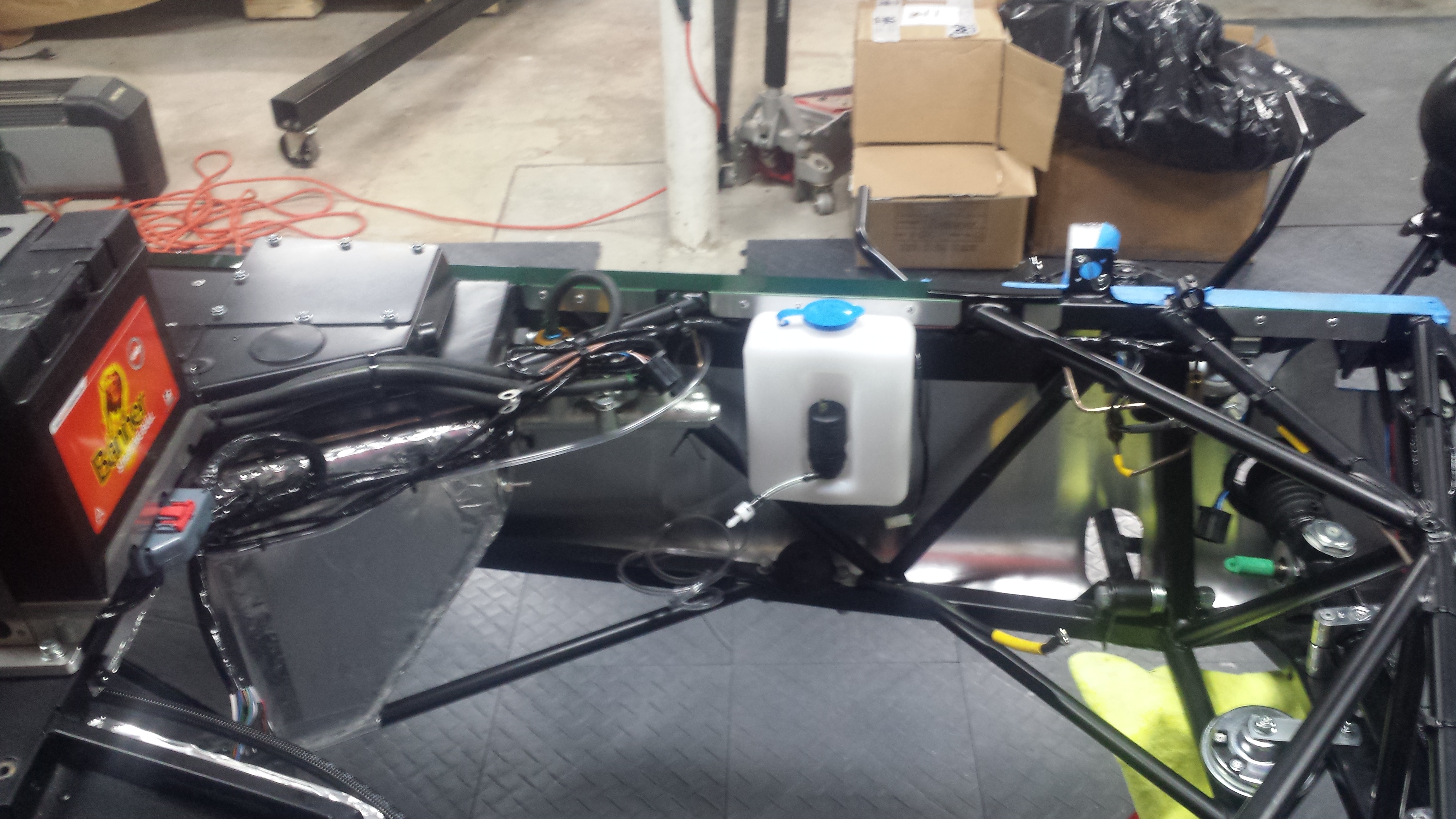 Chris and I then called it a night. All the prep work was done for the engine I felt comfortable doing and anything not on the engine could be put in after the fact. A successful night!