I’ve been eager to get some forward progress going on the car this week so spent some time after dinner tonight starting on getting the engine ready to go in. As I’ve mentioned there’s a ton of bits, but no manifest or description with most of them. Thankfully I’ve got a crate engine which has (had) most of the stuff on there so it’s comparing like-to-like and bolting in with the correct torque spec.

Wherein lies the first challenge. The Haynes manual has most of the stuff in there, but there are a lot of things missing. After doing some Google searches I stumbled across the following Focus Fanatics forum post with a hell of a lot more info in it than the Haynes manual.

With some info in hand, I started with things I could identify because they looked similar; I have no idea what the proper names are for some of these things (I’ll add them later).

1. Removed the thermostat and swapped to the larger unit. Torqued to 89 in-lb.

2. Remove coolant adapter outlet and re-attached the new one. They were very similar but different part numbers and upon closer inspection noticed one different outlet pipe between the two. Torqued to 89 in-lb as well. After that was on I attached the L shaped hose similar to the old one (I left it dangling until I figure out the rest of that side). Also swapped the cam position sensor, that’s the little plug right below the 4 coil packs. The one in the pic is the old one by the way, new one rotates 90 degrees to the left.

3. Working my way around the engine, next up was the crank case breather tube. At first I thought this was supposed to come off and a new one would go in place, but can’t find one with the kit. I spent a good 30 minutes digging through boxes without success. Will have to figure that one out. I then found a picture on Dave’s blog which shows I’ve got the right plate… just need to get that damn hose off. There’s gotta be some kind of trick to it cause I was pulling really hard. 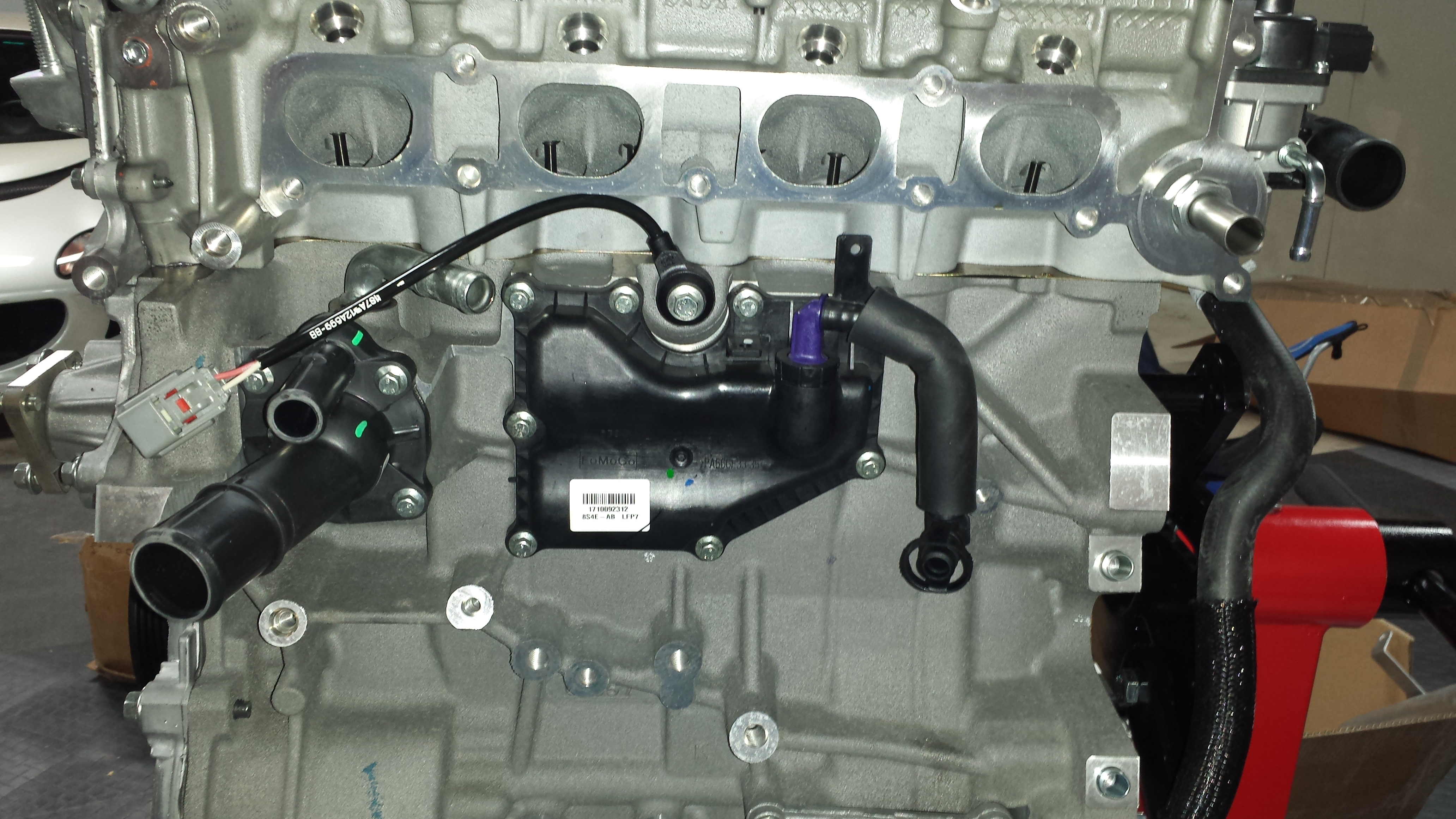 4. Next up was removing the stock oil filter adapter. I replaced with the new one, but it’s different by 90 degrees. That seems odd, but I’ll go with it. I’m hoping all his stuff is right. The adapter was torqued to 18 ft-lb.

5. Next up was the oil modine. There aren’t any instructions but happened to find another picture from Dave’s blog with the modine pointing downwards. I snapped this before fixing the orientation.

And all that took 2 hours and 45 minutes. Most of the time was spent trying to identify parts via Google, find build blog pictures, and then find torque specs. This should really be easier…

I was getting frustrated so I switched gears and went to the car to start prepping that. First up is the washer bottle and mounting a bracket near the passenger side foot rest (it’s the golden bronze thing right in the middle with the wire hanging down). And this is where we run into the old right-hand-drive vs left-hand-drive dilemma. The manual says passenger side, which on my car is the right side of the car, but there appears to be a mount for the washer bottle already on the car on the driver’s side of the car (the left) which is where a UK passenger would sit. Since these are UK instructions is this one of the things that’s supposed to be reversed OR is it supposed to be in relation to the engine which would keep it on the side where it currently is because the engines mount the same in both chassis? The washer bottle is independent of the car’s systems really, so you could probably mount it anywhere out of the way, the question is … what’s out of the way?

Alas, another break, more Googling, and I’m still unclear where this thing goes. From a couple build blogs I found, all from folks in the UK of course, it appears that’s where it mounts, just under the intake. Getting to it is going to be a royal pain in the ass, but then again, chances of me actually using the washer fluid in it are very, very slim. I’ll probably end up mounting it and never filling it to be honest but want to put it in because it belongs on the car. I also can’t find the little rubber washer jet to attach near the windscreen, have to check with Caterham on that one.

And that wraps it up. Not much progress, but a lot of Googling, a lot of blog searching, and some small steps in just over 3 hours. Maybe another go at it later this week.