With Kim out of town and a rainy Sunday before me, I set about to get the rear suspension started and with the help of Keith and Adam start hashing through the engine prep. I knew from reading Dave’s blog posts, discussions with Jon at Caterham USA a year ago when I bought the engine, and from skimming the manual there were a number of bits which would need to be addressed prior to putting the engine in. I also knew there was no manual for what needed to be done – all I got from Caterham was a box of parts without so much as a parts manifest – so this was largely going to be a learn-as-you-go process. Thankfully I’d enlisted a couple friends who knew what they were doing.

To start the day out while I waited for Keith and Adam, I went ahead and put down two layers of blue painters tape over the rear chassis members as the build manual advised. I then pulled the two dust covers and drive flanges out of the diff using a flat bladed screwdriver to pry them loose. With a little wiggling they popped out pretty easily although they got a little mangled in the process – they’re going in the trash, or maybe becoming book-ends on the bookshelf, so didn’t care too much. 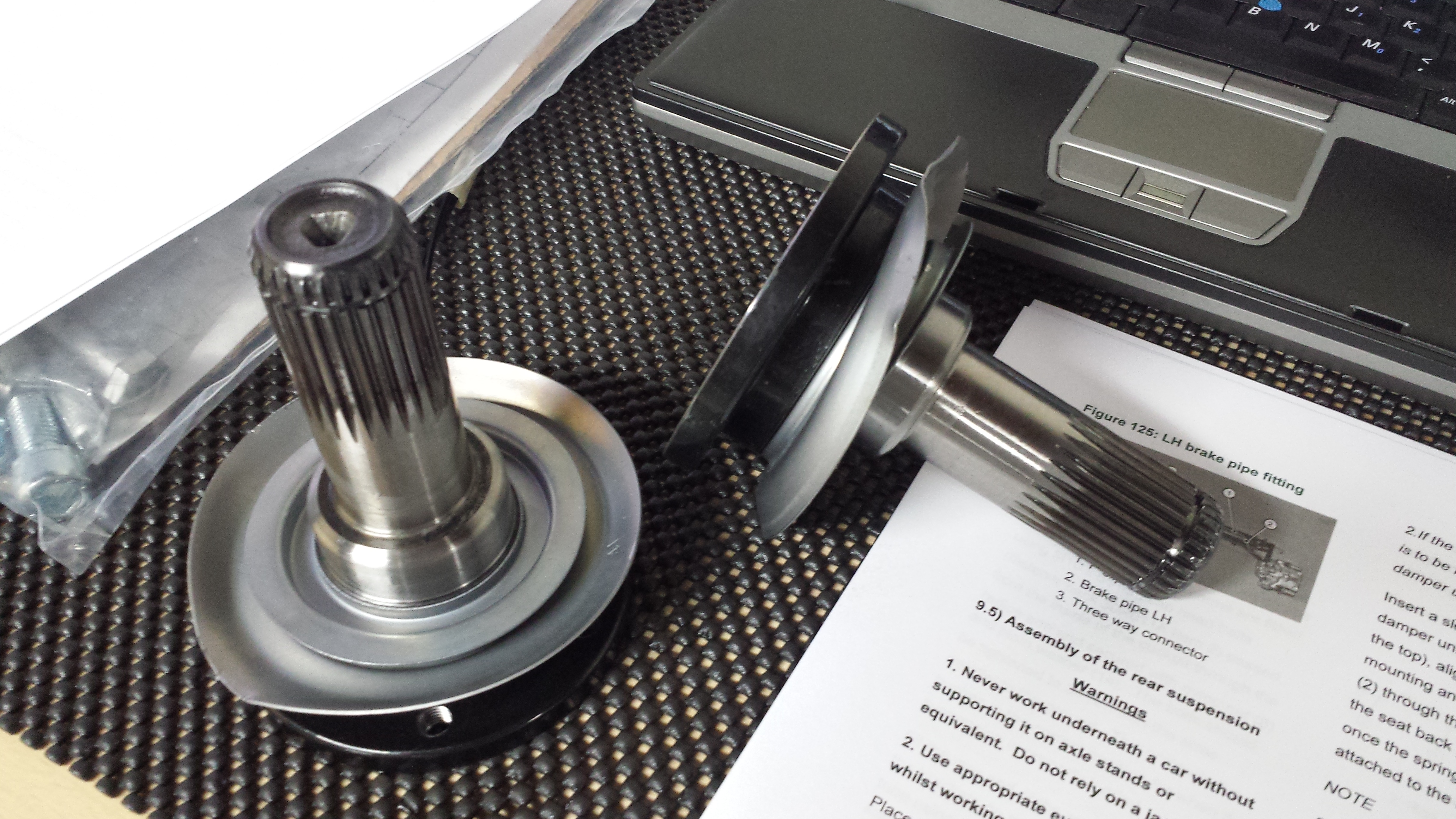 View inside the diff. Note you can identify what type of differential you have is by looking inside; see here. Basically if you look inside the hole, denoted as ( ), and see (-) it’s an open diff, if it looks like (+) it’s a ZF type diff, and if you see a (0) then it’s a Quaife type (smaller circle inside the larger one). 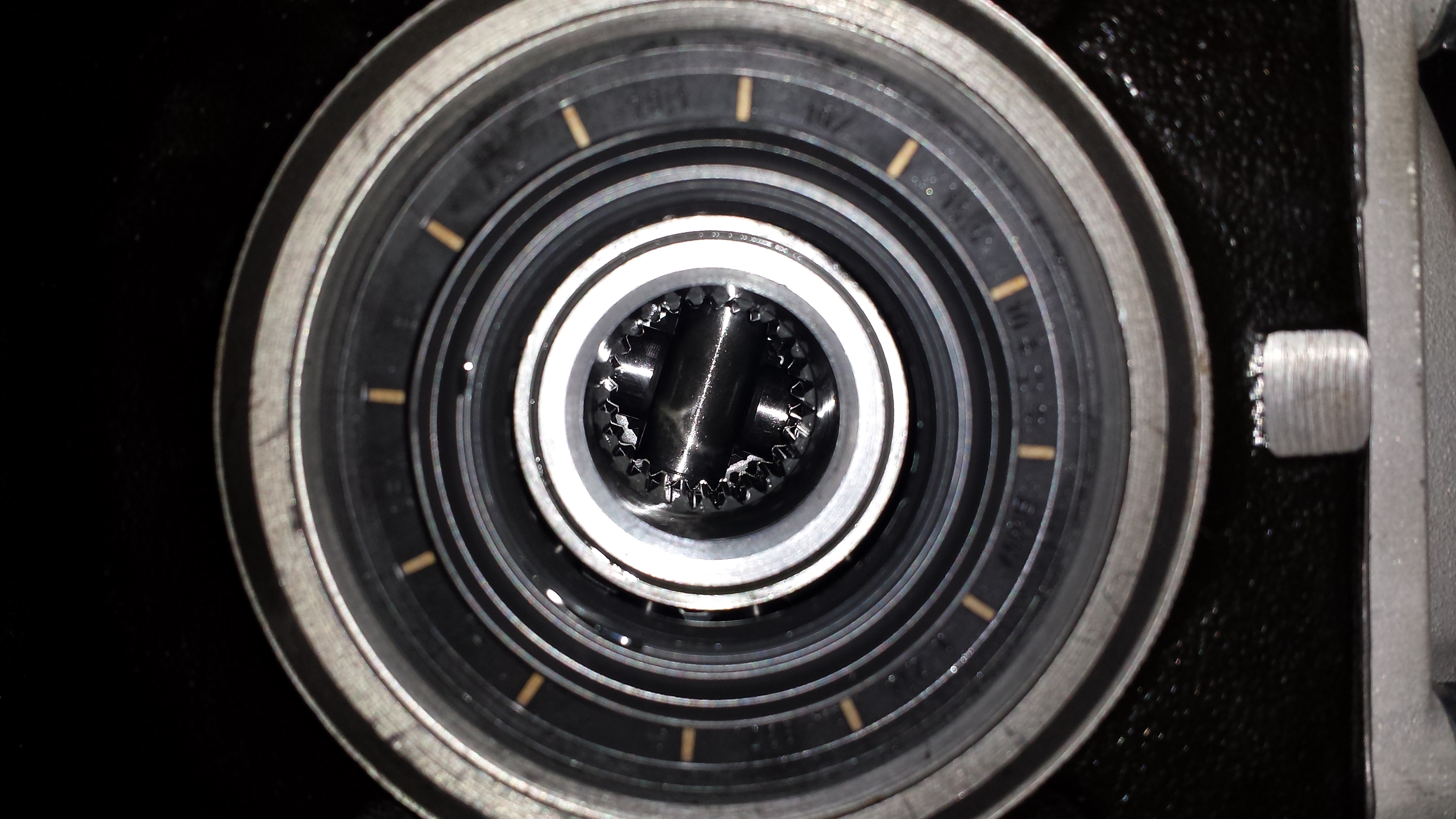 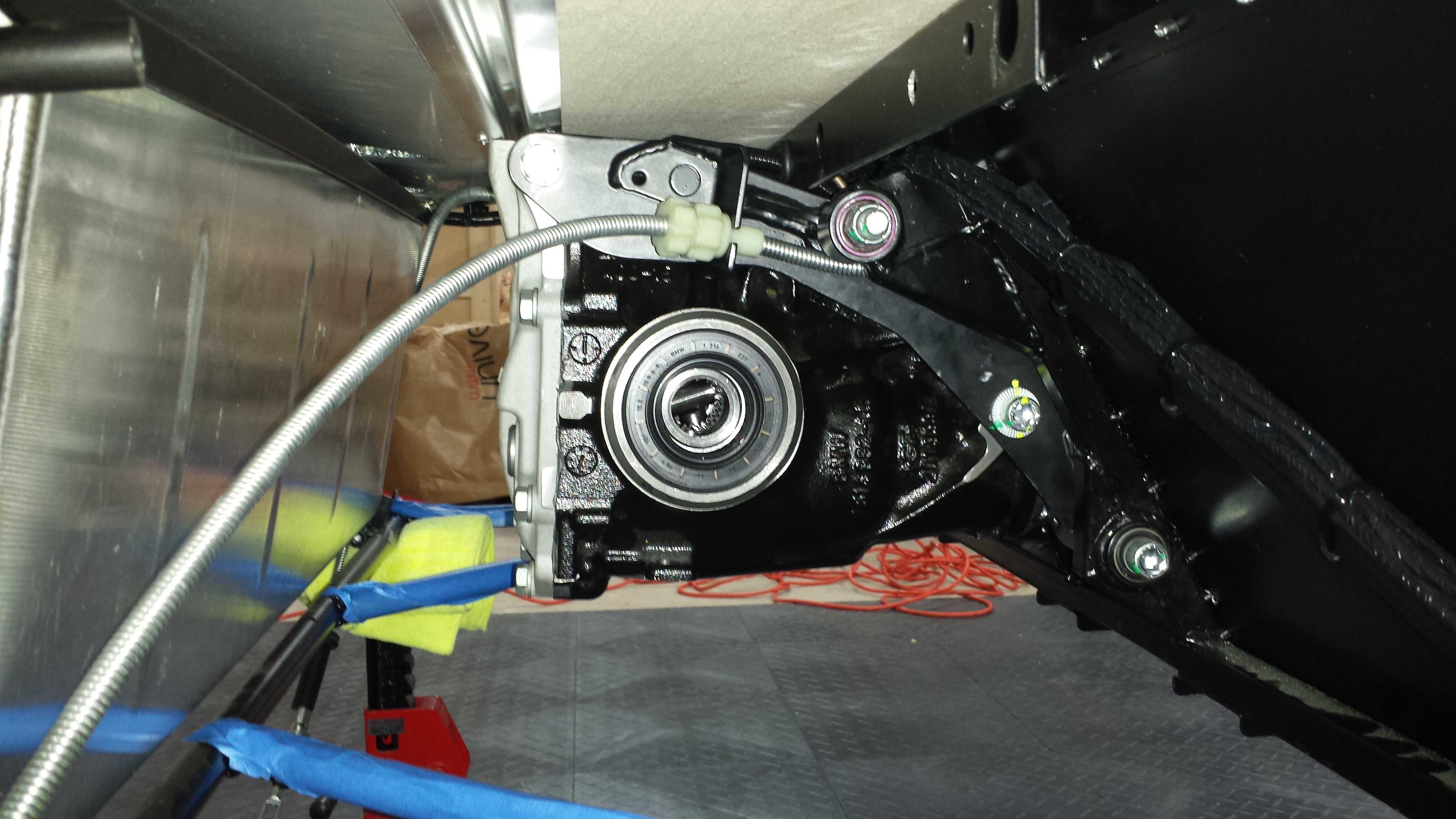 With those out, I finished up the pop rivets on the DeDion tube to hold the rigid brake lines in place. I had missed one of the P clips earlier and had to source new rivets from Home Depot. I couldn’t remember the exact depth, but I know they’re 1/8″ rivets. I had steel and aluminum rivets in the pack so went with aluminum since there’s a lot of aluminum in the car. Good scientific approach right… 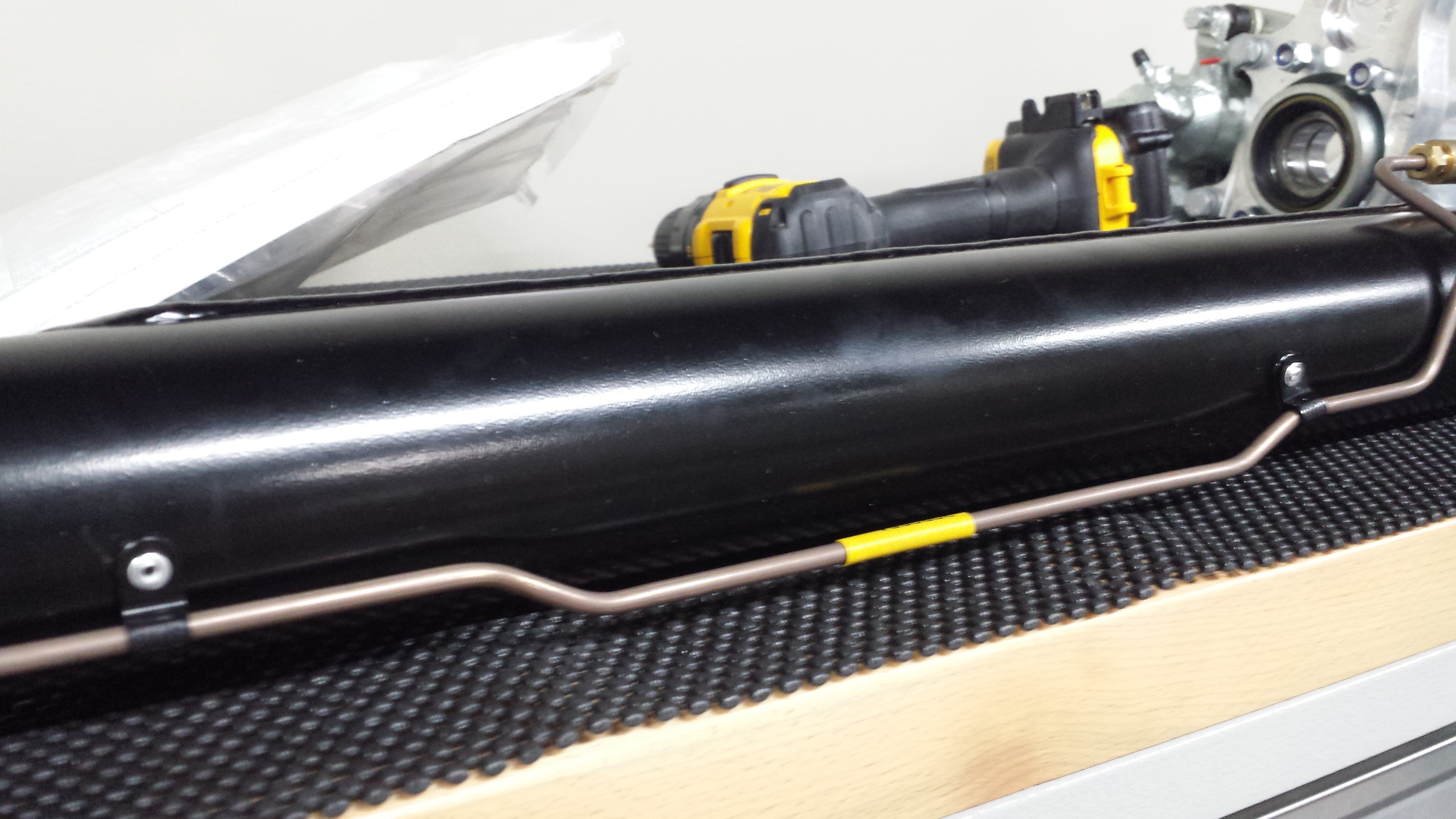 View of the DeDion tube with the brake lines attached and the 3-way junction in place. About that time Adam showed up and we set about bolting in the track day rollover bar. The rollover bar has to be secured prior to the rear dampers going in since they obscure the bolts coming up through the bottom of the chassis. 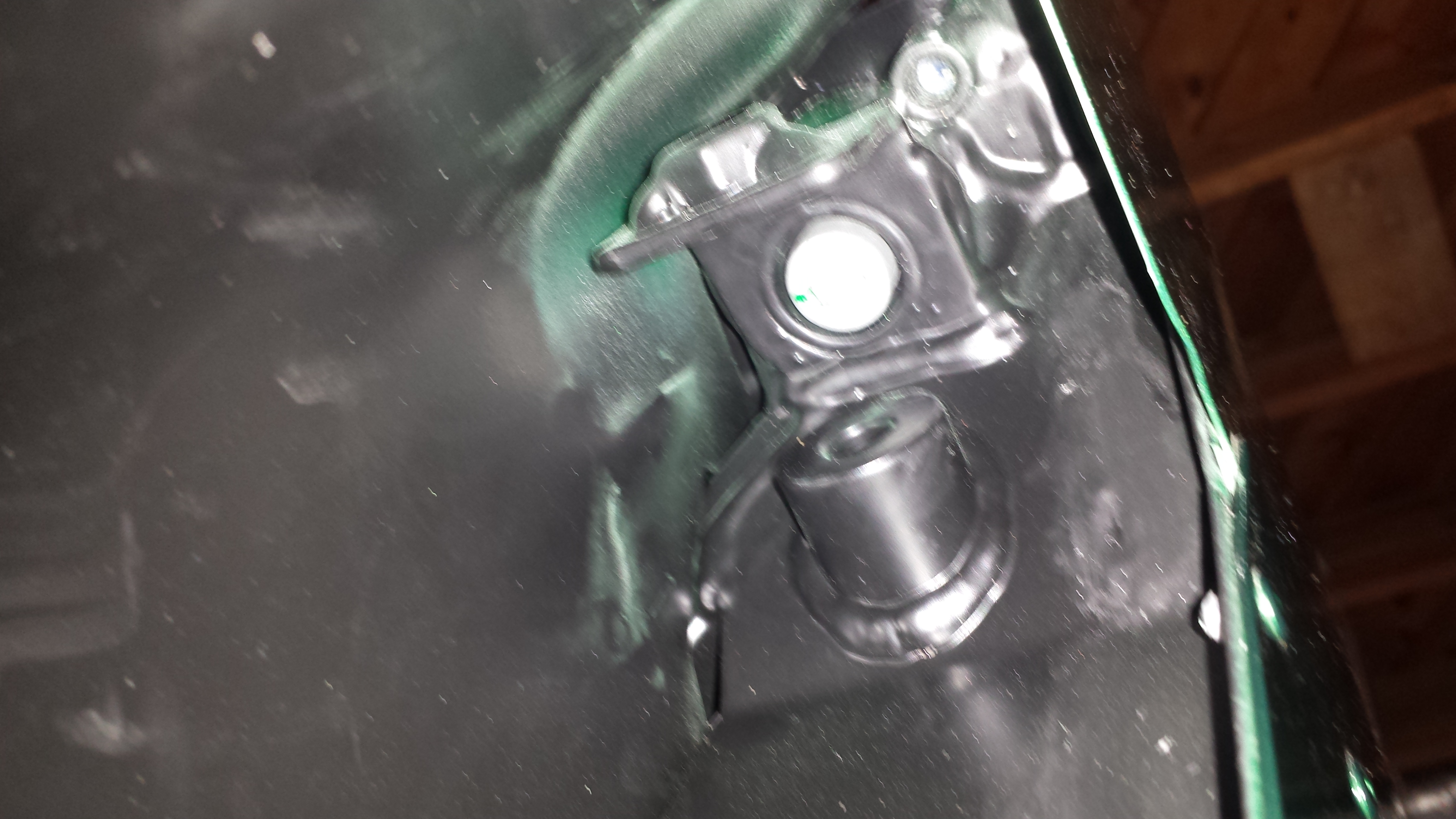 Nothing major to report on this one – six bolts, some washers / spring washers as the manual specifies, and you’re done. The rollover bar didn’t quite line up to the rear mount points, but by keeping things loose and applying some pushing, pulling, and swearing, the bolts went in with a minimal amount of fuss. I was surprised at how far the track version of the rollover bar leans forward into the cockpit. The standard version goes up straight, or nearly so, and the track rollover bar leans forward a good 20 degrees. 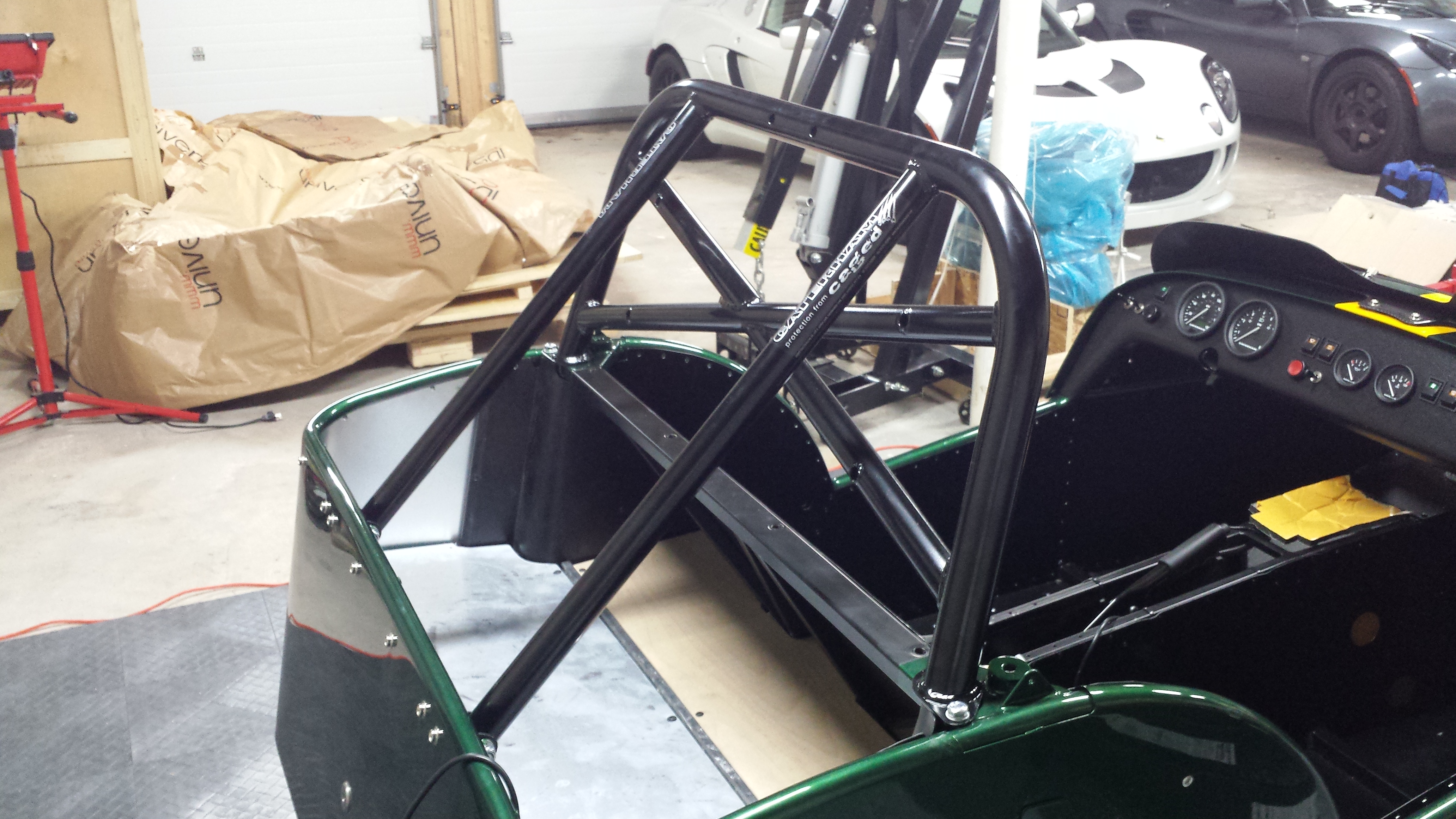 We then debated what our next step should be. I wanted to use Adam and Keith’s time wisely so we opted to tackle the engine prep before going further with the suspension. I can handle the suspension solo whereas they were the resident engine experts and wasn’t sure when they’d be available again.

First step was to get the engine unwrapped and off the crate, where its been sitting for a year, and onto the stand. To do that we started with attaching it to the lift, but quickly realized the arm on the lift didn’t quite have the clearance we needed to get around the crate. With a little creativity we got it bolted on and slowly lifted it up until it swung free without bumping into the Exige. On second thought I probably should have moved it to be safe, but no harm no foul. 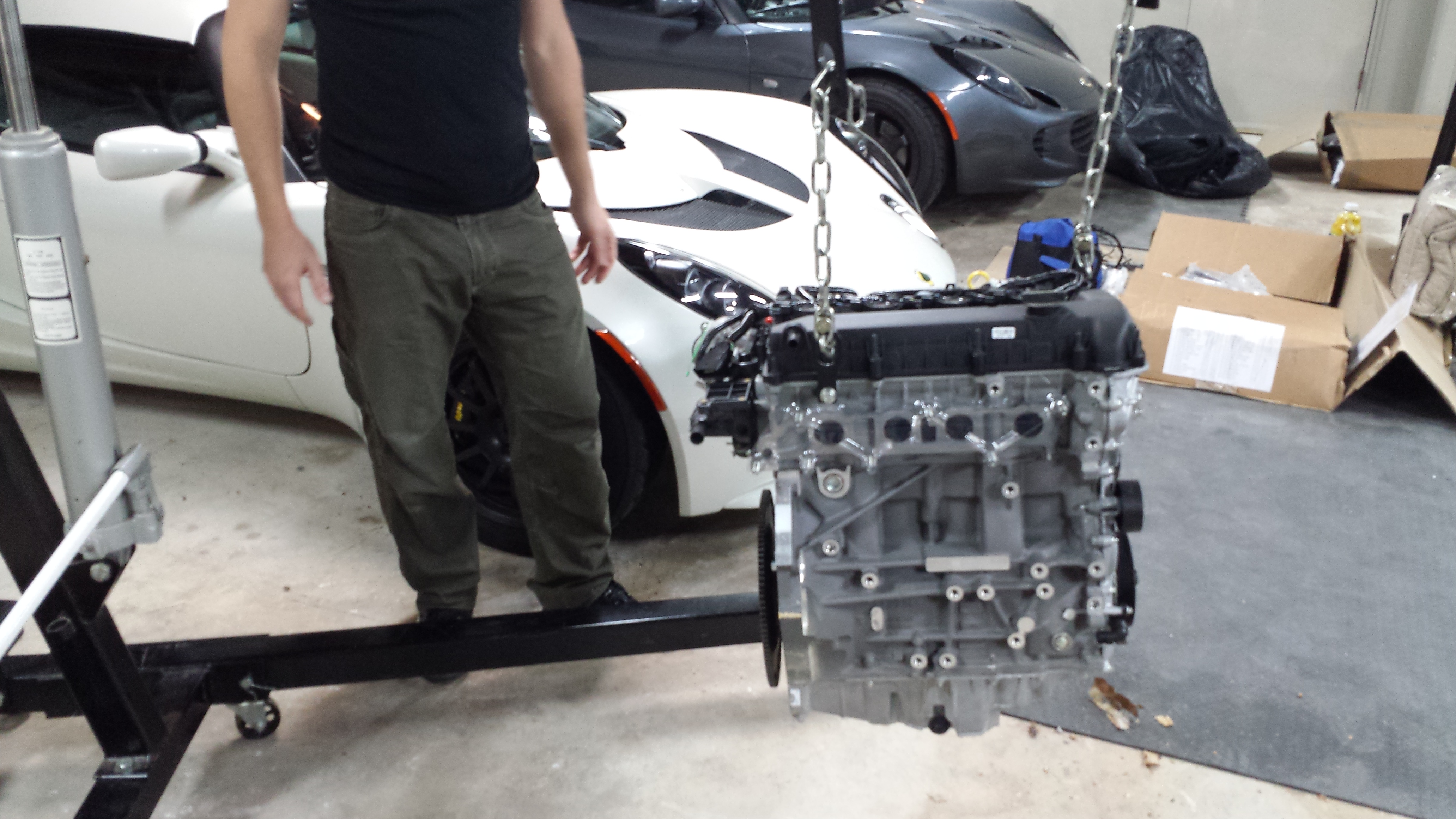 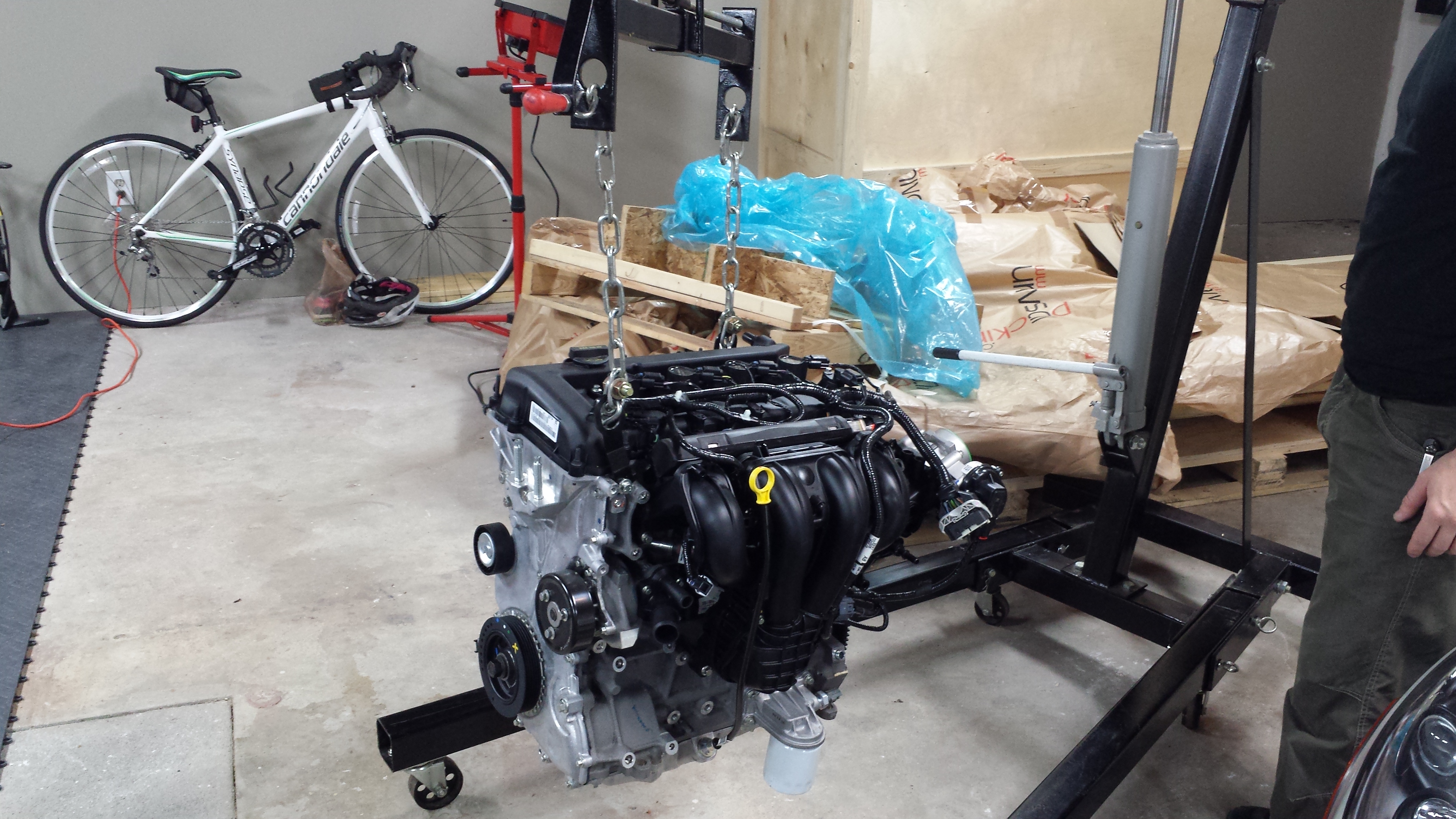 Next up was getting the stand attached to the engine. This was a bit of an issue as we didn’t have any bolts readily available. After scouring the miscellaneous z-packs we settled on some M10 bolts scrounged from the suspension bag. They fit ok and gave us about 5-6 threads of depth. We got 3 bolts in but had to remove the 4th bolt when we got to the oil pan removal. I’ll source some better bolts tomorrow from Home Depot and swap them out.

Once on the stand we started pulling stuff off. The engine I’d ordered was fully dressed so all the component parts needed to be removed. Taking those parts off, to me, was somewhat helpful. I’ve done lots of car “stuff” before with my 350Z and on the Lotus’ but had never delved into the mysteries of engine internals. After today I feel a little better about it – it’s all pretty straight forward actually.

There’s no manual or instructions per say, but I did get the Haynes online manual for the 2008+ Ford Focus so we’d have the torque specs as necessary for the Ford Duratec 2L engine. From talking with Jon at Caterham USA back when I ordered the engine I knew the intake came has to be swapped so it can use the single pin intake came instead of the multipin setup on later Duratec engines. Here’s the list of steps we took to get it disassembled and swapped.

And that’s where we ran into issues. The timing sprocket just wouldn’t get back onto the camshafts due to tension. We were trying to avoid taking off the timing cover and all it ensued, but no luck. Since I didn’t have a bearing puller or a way to get the crankshaft pulley off, decided to halt there and move onto the oil pan removal.

Taking off the oil pan was pretty easy. Loosen the dozen or so bolts from the oil pan then use a screwdriver in the slot, located in one of the corners, to pry up the pan and break the seal around the gasket. Be prepared with a towel or something underneath. We weren’t and a mess ensued (again). 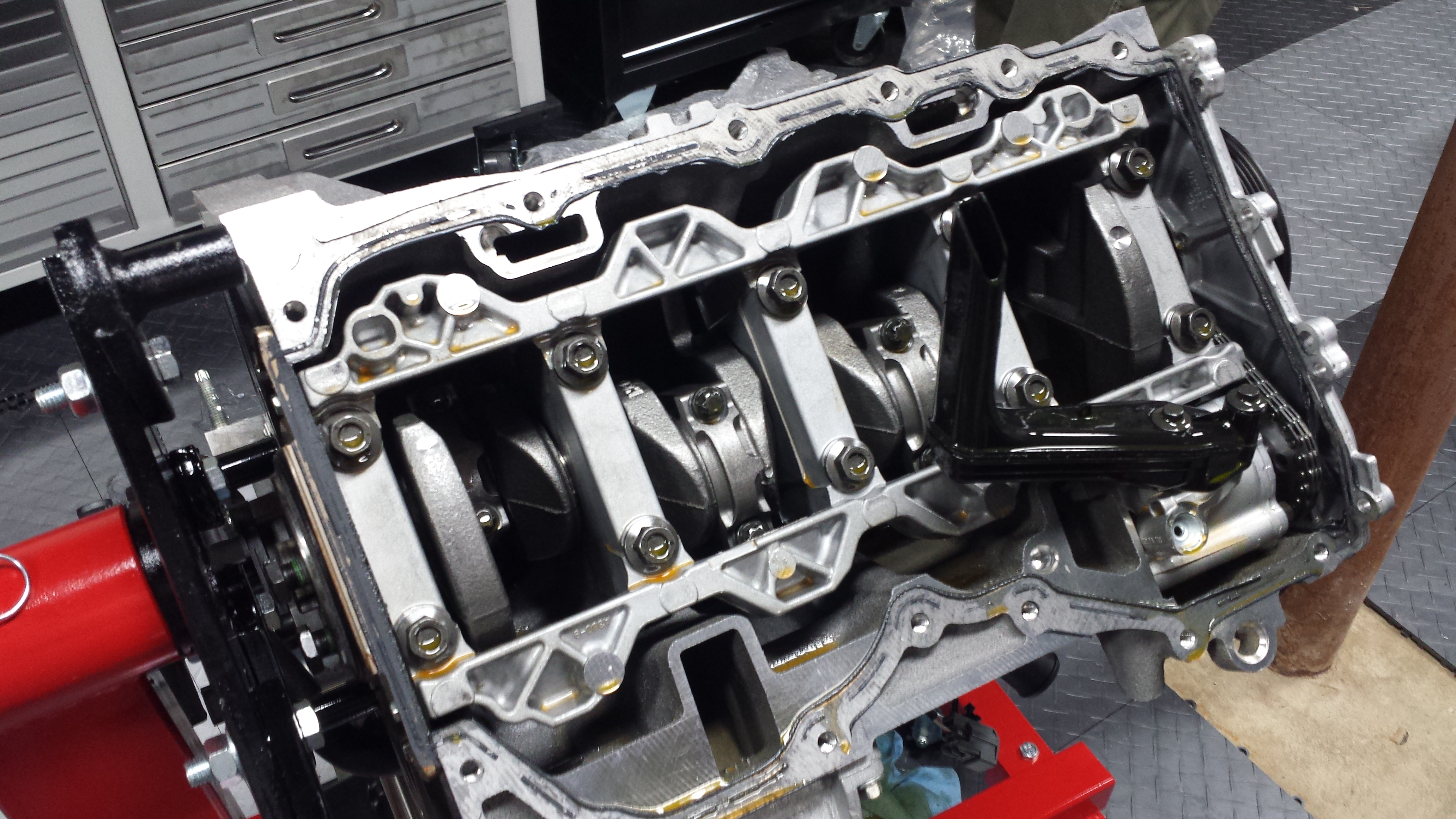 I didn’t have any instructions to assemble the oil pan from Caterham, but did find a good write-up on Dave’s blog at https://fernlahone.wordpress.com/2013/04/. We were already well into a 7 hour day at this point so called it quits until later this week. I pulled a large trash bag over the engine to keep debris off it since it’s all opened up until then.