It’s been an amazing few weeks! A two week trip to India for work, a weekend at the Taj Mahal, and a weekend at home on the couch with the flu accounted for a lengthy delay in getting anything done on the car but it was time well spent. The trip was amazing and the weekend on the couch, while not being ideal with the flu, was actually what I needed. I’d been running ragged the last couple months and I think my body just finally gave up; the flu was a blessing in disguise because it gave me the time to watch some Michigan football, put a fire in the fireplace, and eat pot roast from the slow cooker. It also gave me time to read a bit in the manual, read a couple more build blogs, and plan my attack on the diff.

A box from Caterham showed up this week too. Inside I found my missing lower left wishbone, fuel filler cover for the boot, and another spare wheel mounting boss. The wishbone has some metal slag loose inside the hollow tube, but you won’t hear it over the car, so am just moving ahead with it (although mildly miff’d they sent it from the factor like that). The spare wheel mounting kit I didn’t need – I need the wheel and tire – but there seems to be a disconnect somewhere at Caterham (understatement of the year if you’d read my earlier posts about the wrong car showing up). Anyway, they’ll get it sorted eventually, so sent an email back asking for the correct parts. The handbrake clevis wasn’t in the box either now that I think about it; will have to follow up with them on that too.

Saturday morning at 9am Adam showed up and we got to work on the diff. Mick said he was going to come by later that day and lo-and-behold he strolled in shortly thereafter. I put him to work on the front suspension while Adam and I tackled the diff.

The first thing we did for the diff install was fix my backwards handbrake cable. I realized last week I’d been thinking about it upside down when I ran it the first time. Easily fixed so not a big deal and you really have to get the adjustment knob in the right place for it to get into the diff holder properly. 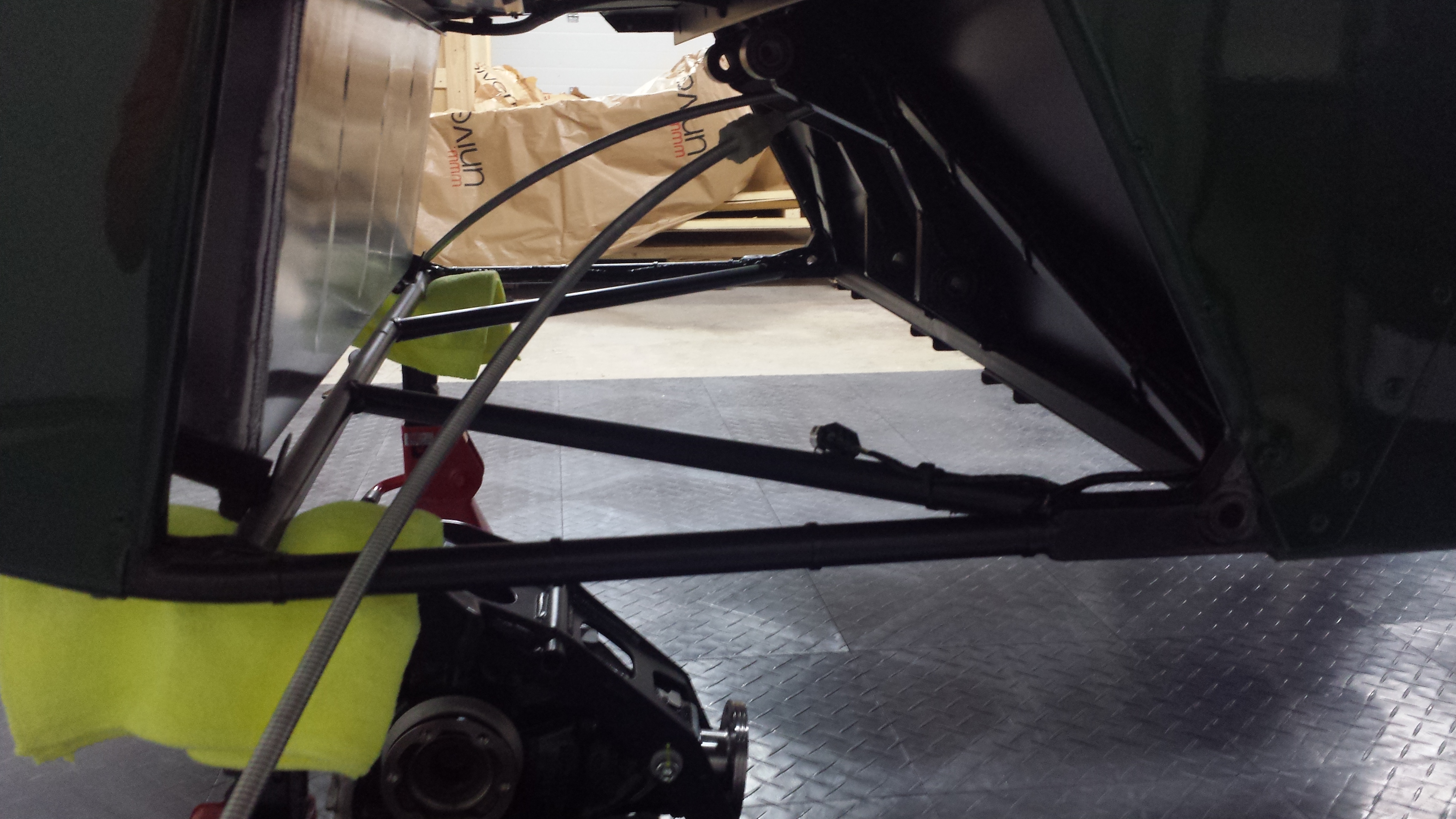 I was a little apprehensive about the diff. In some of the blog posts it goes in piece of cake… in others its a nightmare. Our experience was somewhere in between. We first started off with getting it into position by Adam lifting it up and then me sliding some long screwdrivers into the top mounting brackets to hold it. That worked fantastic. I snapped a quick picture of Adam under there aligning it for posterity. 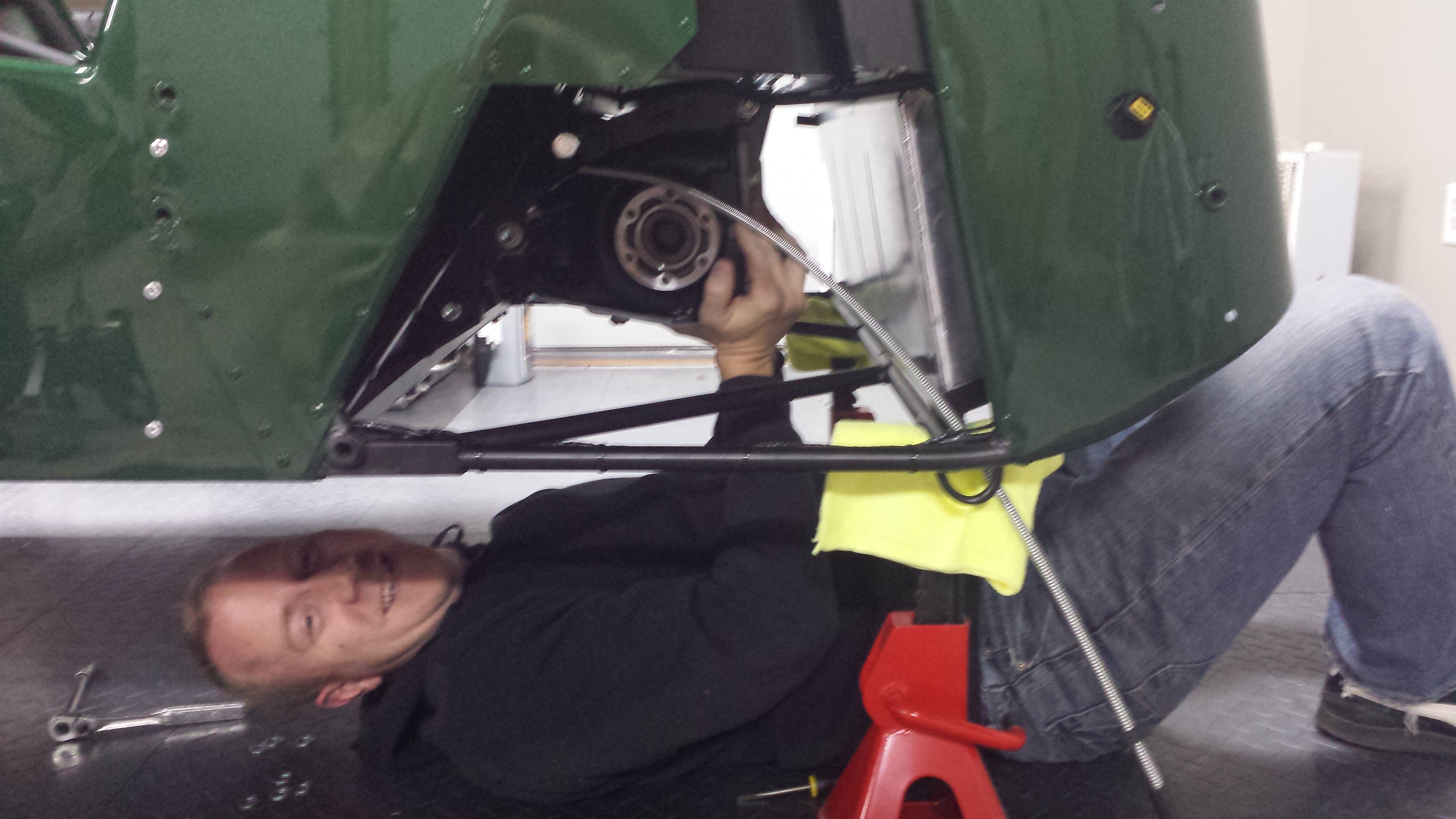 As I’d read about in other posts, the long top bolt was a pain in the ass. We chamfered down about 2mm of the threaded end of the bolt with a file and used a rubber mallet to pound it through. Having two people is a must – I couldn’t imagine trying to tackle it solo.

With the diff in we turned to the prop shaft and started to get it bolted to the diff. Only to find the prop shaft on the ground where we’d left it… and not in the transmission tunnel where it should have been. Uh oh… 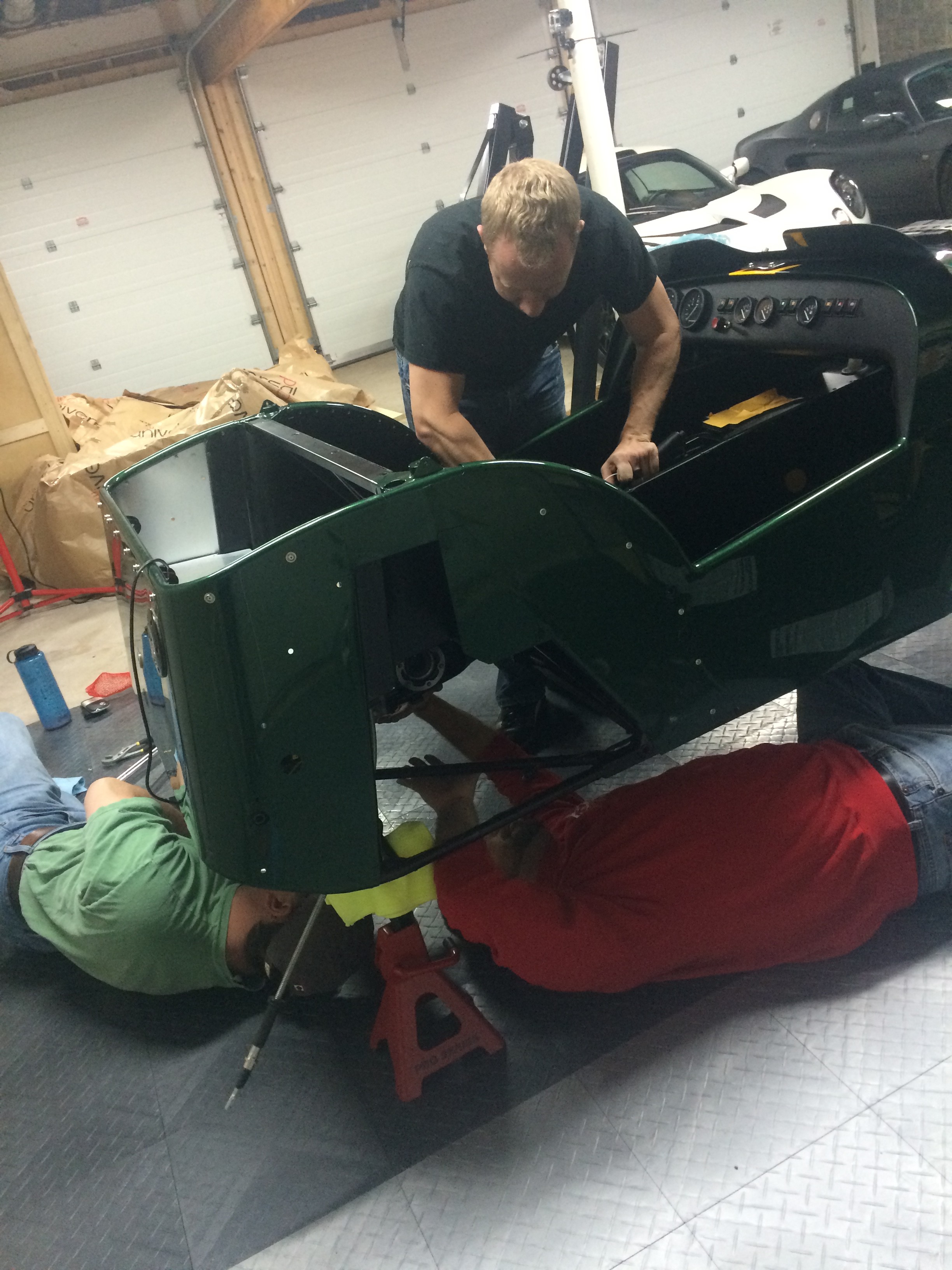 After trying any number of other approaches to get the prop shaft into position we realized we were going to have to take the diff out to get it in. Son of a… sigh. I’ll skip the summary, but let me just say if you thought putting IN the diff was hard, you should really try taking one OUT. Holy shitballs Batman.

But in the end, with a lot of rubber malleting, prying, pushing, twisting, banging, and swearing, we got the prop shaft into place and the diff out then re-installed and aligned. I took a pic of everything in but it doesn’t do the effort justice. Only someone else who’s built a Caterham will understand I think. 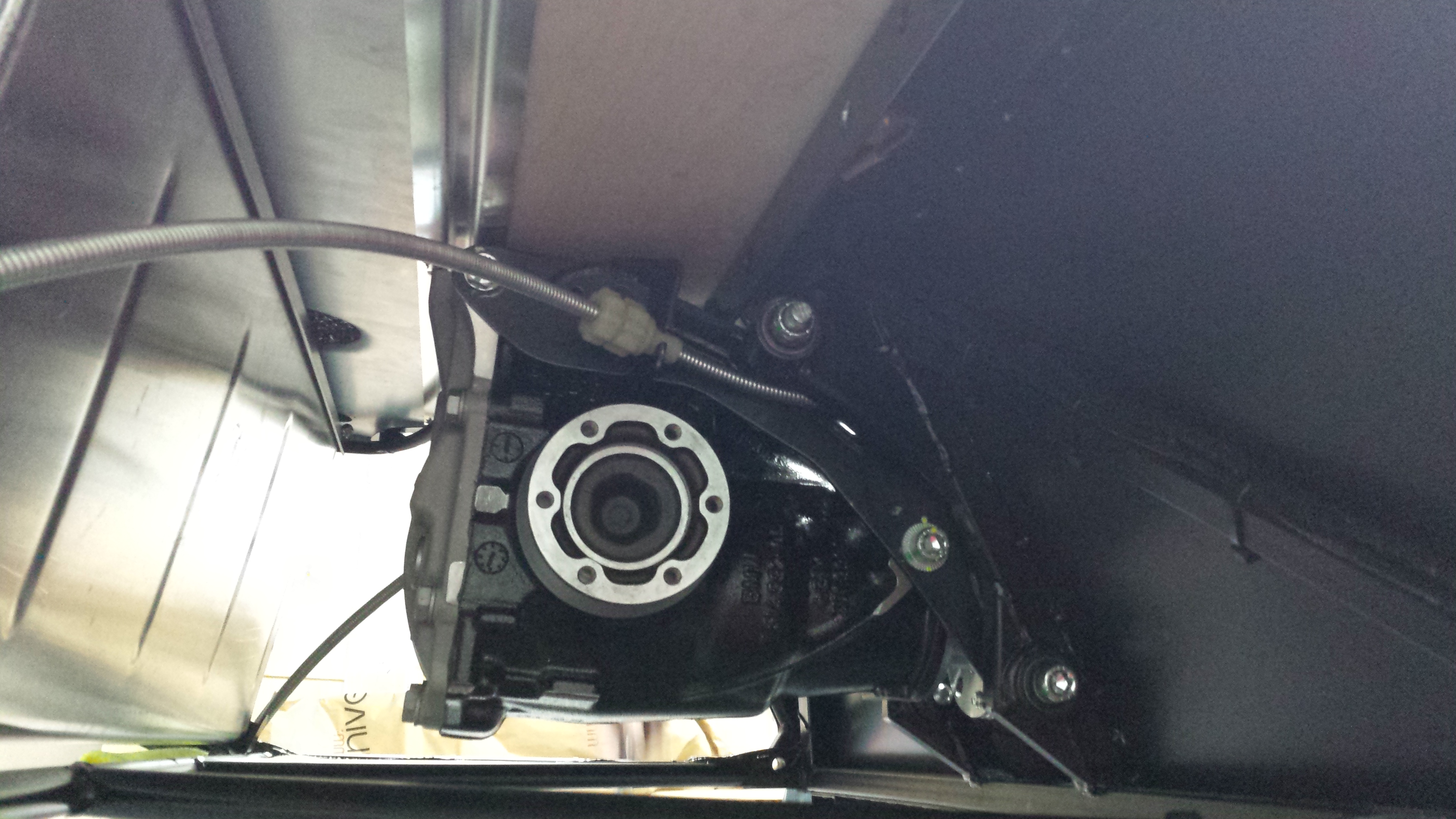 Meanwhile of our diff shenanigans, Mick was busy up front working on the suspension. Using the right hand side of the car I’d already done as a guide, and following the directions from the manual, Mick was able to get the lower wishbone, upper wishbone, and damper installed. It wasn’t until we started torquing things down did I ask “Hey Mick, you put the bushing spacers into the damper upper and lower mounts, yeah?”. Mick’s reply is a classic, “What bushing spacers?”. I snapped a quick pic prior to disassembling the dampers since I knew I’d be getting anti-seize all over myself in about 30 seconds.

At that point Adam had to head out so we bid him farewell and set about getting the bushings put in. The damper is pretty straightforward, but that top bolt is a pain to get to. It’s right up against the body work, the upper wishbone mount, and takes an Allen wrench to get in there so its a slow process. Couple that with a bunch of copper slip / anti-seize all over your fingers and its truly a joy. 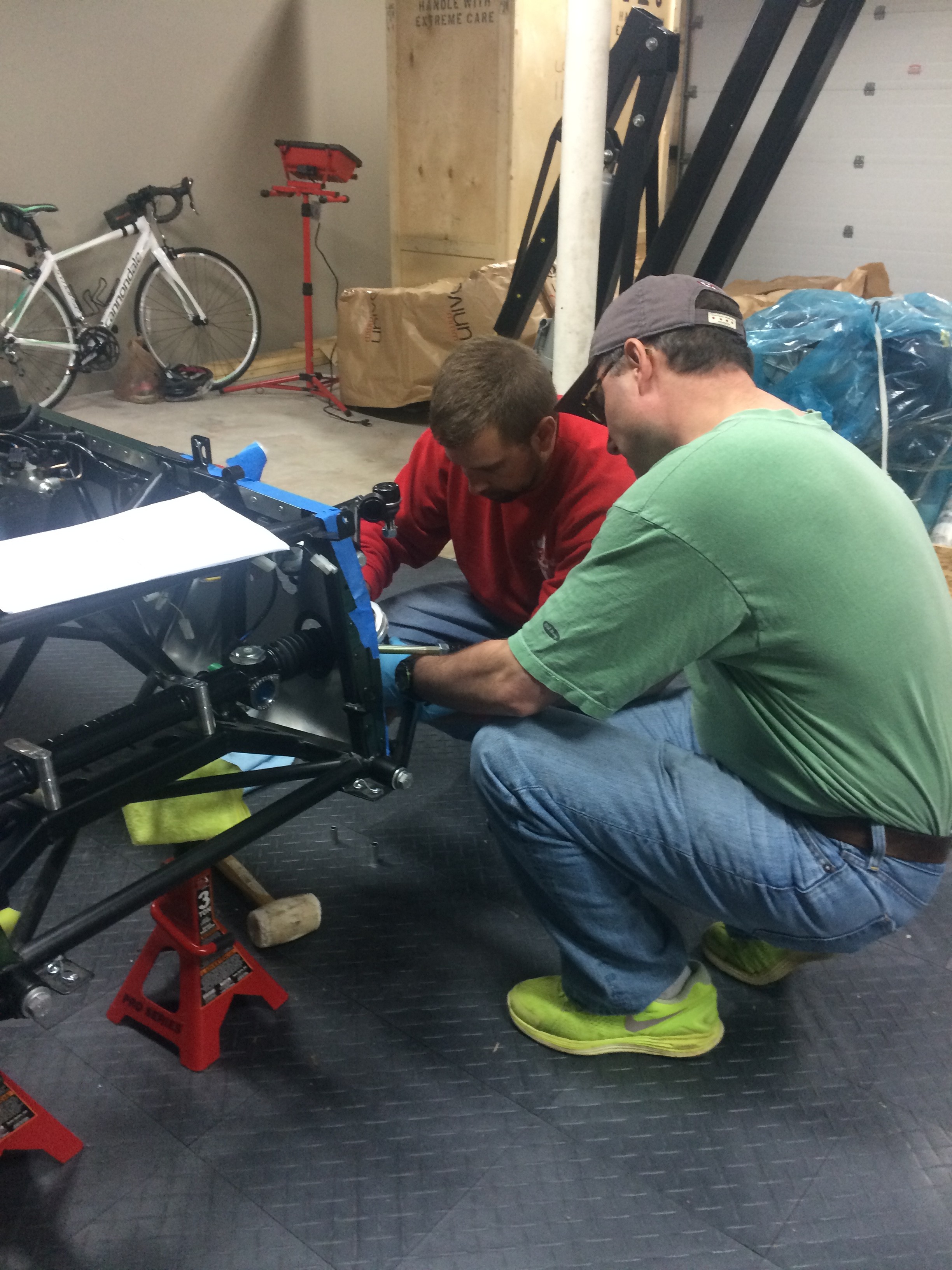 What I’m learning about building the car is to be successful and efficient you follow these steps: